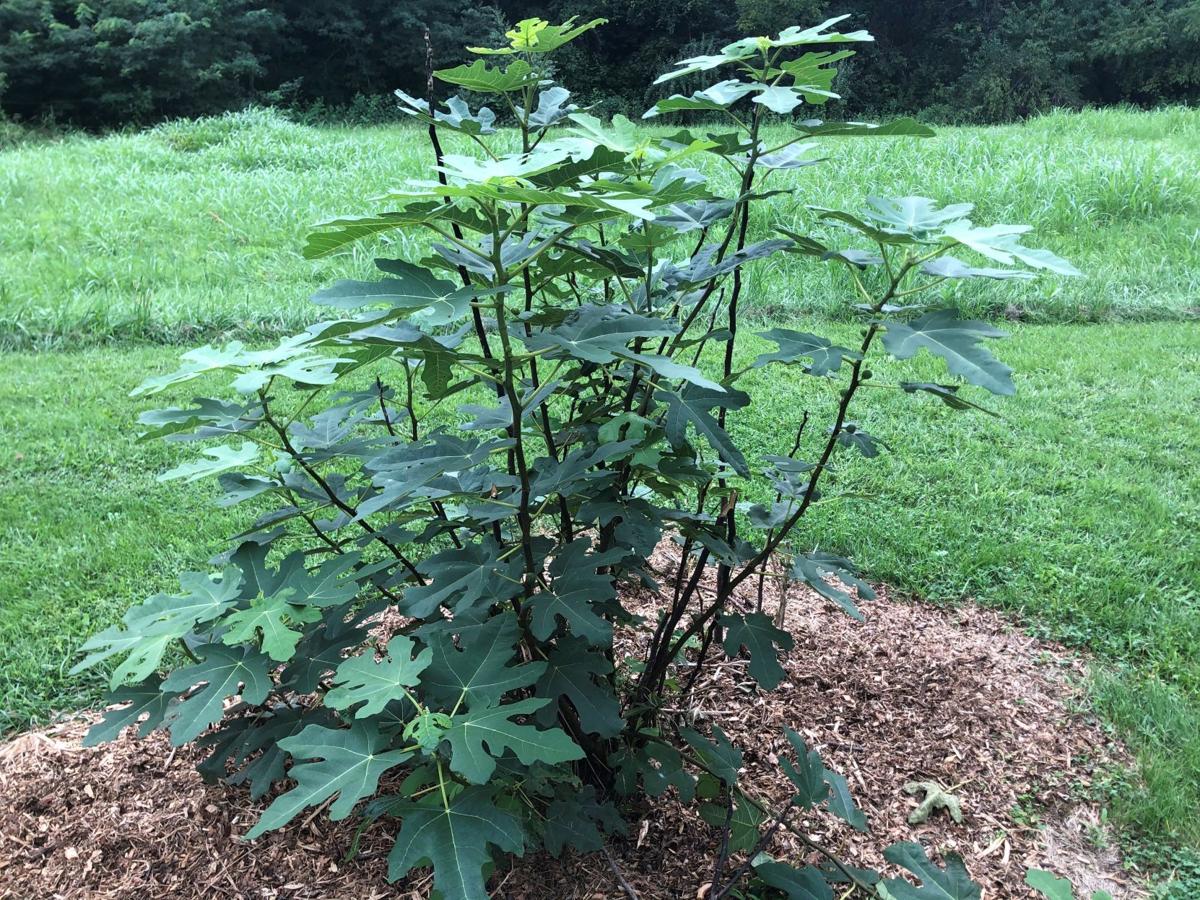 Figs are just starting to develop on this fig bush in Henry County -- but no one ever noticed any flowers beforehand. That's because flowers grow inside each fig. Where figs grow naturally -- in regions which don't get cold -- those flowers are pollinated by wasps which enter the fig through a tiny hole in the bottom, but figs sold commercially in the U.S., and grown in home gardens, are sterile types which don't involve wasps. 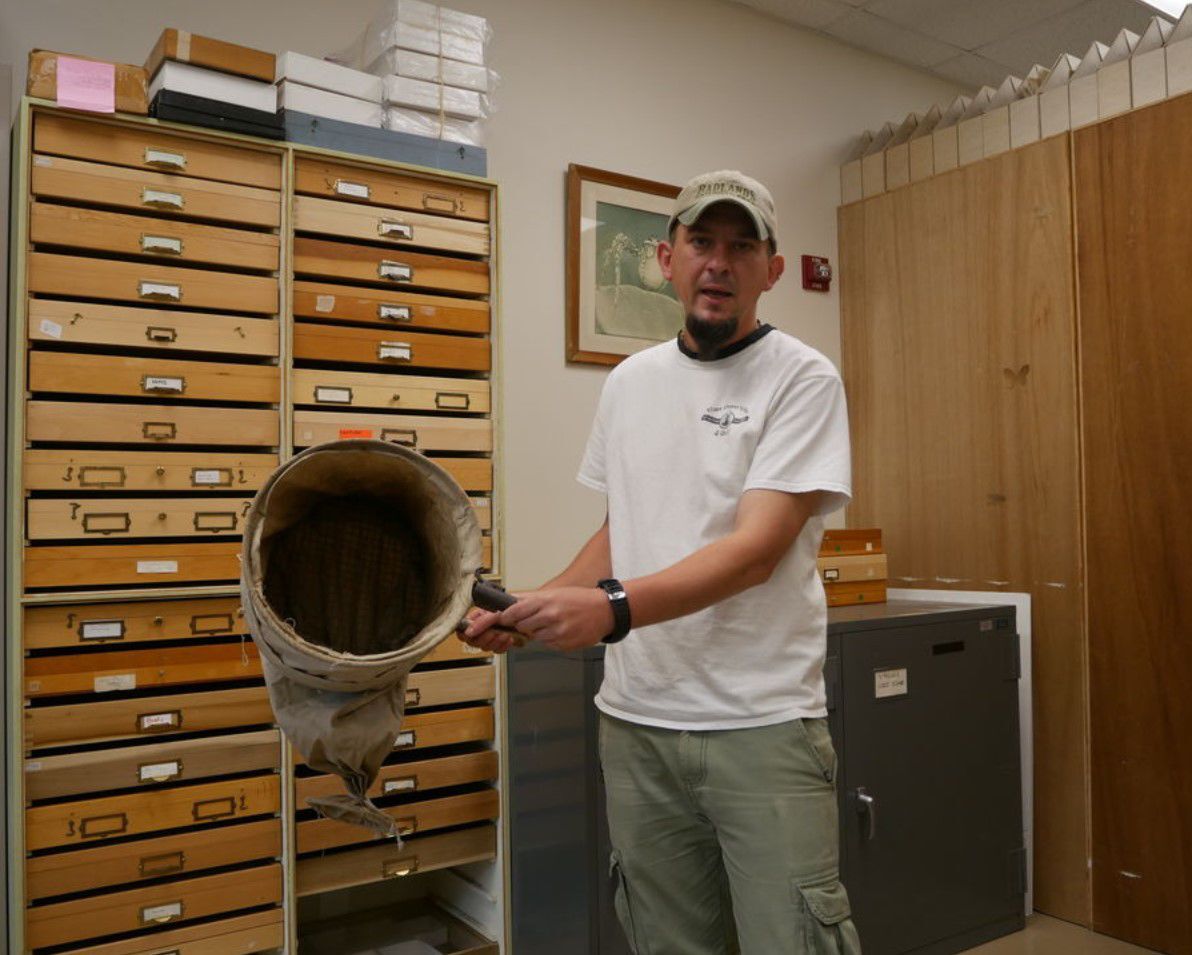 Dr. Kal Ivanov, assistant curator of invertebrate zoology at the Virginia Museum of Natural History, holds up a sifter used to collect insects. Ivanov explained recently about fig wasps, which pollinate figs in the wild. 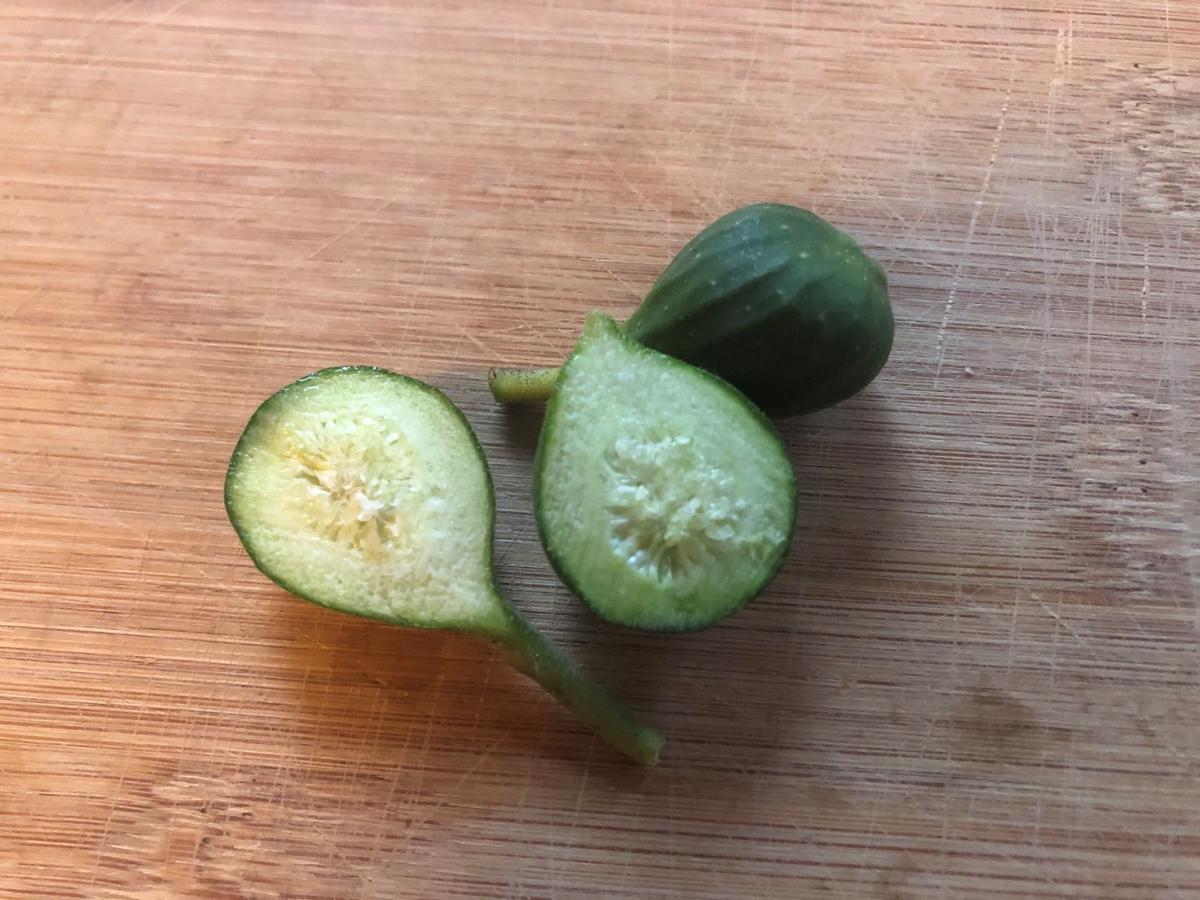 Flowers are beginning to form inside this immature fig. A fig contains many flowers inside which, in other parts of the world and in the southernmost tips of the U.S., are pollinated by wasps which enter the fig. Figs grown commercially, and in home gardens, are non-pollinating types which don't involve wasps.

Figs are growing now on fig trees or bushes in Southern Virginia – but when did those plants flower?

You easily notice the flowers of other fruits, whether they be showy and lovely, such as the peach, pear and apple, or small and modest, such as strawberry and raspberry.

You don’t notice the fig flowers, however – because they are inside the figs.

Virginia Museum of Natural History Associate Curator of Invertebrate Zoology Kal Ivanov explains: “A fig ‘fruit’ is a type of multiple fruit derived from a cluster of many small flowers (an inflorescence called a syconium) located on an inverted, pouch-like receptacle. The many small flowers lining the inside of the receptacle are unseen unless the fig is cut open. These single flowers produce a fruit, and ultimately merge into a single mass, i.e., the fig fruit. Technically, a fig fruit proper would be only one of the many tiny matured flowers found inside one fig.”

In other words, the actual flowers are tucked inside the fig we eat.

Then how do the flowers get pollinated?

Good question – with a fascinating answer. However, that answer may make the squeamish shy away from biting into a rich, delicious fig or turn down Granny’s famous fig jam next Christmas, so let’s start by clarifying: The fig pollination we are about to explain does not occur in any of the figs you’re likely to get here in Southern Virginia.

“Modern commercial cultivation of figs for the consumer market usually focuses on artificially selected parthenocarpic cultivars that do not need pollination to produce ripe fruit. This is the popular horticultural fig for home gardeners,” Ivanov said.

Instead of growing commercial fig plants from seed, farmers and scientists grow new plants “through the use of burrs, plunging, grafting, tissue culture and, especially, cuttings. Figs propagate readily from cuttings, and most of the commercial fig growers reproduce their own trees this way,” Ivanov said.

Meanwhile, he explained how figs in other parts of the world -- and the very southernmost tip of the U.S. -- are pollinated.

Turn a fig upside down. You may see a small hole in the bottom of it. That’s where a particular kind of wasp enters --- and, like the Twilight Zone or, perhaps Hotel California, might never leave.

The scientific name for the fig wasp is Agaonidae. There are more than 750 species of fig wasps in the world, but only about a dozen of them live in the extreme southern parts of the U.S., Ivanov said. There aren’t any known in Virginia.

When the female flowers inside the immature fig are ready for pollination, they put out a smell that only that plant’s corresponding specific female wasps notice – and go wild for.

Following the scent, the female wasp squeezes through the tiny hole at the bottom of the fig. That hole is so small that the wasp’s wings and antennae usually break off while she’s squeezing through there. No big deal: She won’t need them again, because she just has entered her death trap.

This female wasp is carrying pollen that got stuck on her in the fig where she was born and then left. This pollen gets into the flowers inside her new fig home as she goes around laying one egg inside each of many, but not all, flowers.

Her mission fulfilled, Mama Wasp dies inside the fig. According to the BBC’s sciencefocus.com, an enzyme in the fig, called ficin, breaks down her carcass into protein – so anyone who eats that fig is not likely to notice a wasp.

The pollen collected in each flower will allow seeds to grow. Inside the flowers where eggs have been deposited, those eggs hatch into grubs, which eat the seeds; but the flowers that didn’t get eggs in them will produce seeds that can start the next generation of fig plants.

Meanwhile – and this is getting even weirder yet – after a few weeks living inside the fig seeds, the male grubs emerge from the seeds, according to Beatriz Moisset in “Fig Wasps” on the U.S. Forest Service's website. They are smaller than the females and don’t have wings. They root around inside that fig, looking for female grubs to mate with.

After they mate, the male wasps tunnel outside the fig, then die. The female leave that fig through the holes burrowed by the males, their eggs already fertilized – and they look for a new fig to fly into, to lay their eggs, Ivanov said.

“Once the female fig wasps have left the fig, it ripens, changing color and smell, and becomes attractive to seed or fruit-eating animals,” Ivanov said.

“This is a rather generalized life cycle as the behaviors of individual species differ and many variations do exist. Not all species of Agaonidae act as pollinators and there is a suite of non-pollinating fig wasps that also breed in the fig, but which play no role in the pollination process,” he said.

Figs in the garden

“Our most common southern figs are ‘Brown Turkey’ and ‘Celeste,’ and they do not require pollination,” Virginia Cooperative Extension Horticulture Agent Melanie Barrow said.

In other words, these aren’t the figs that would have had fig wasps inside them.

Figs grow well in most soils, except for very compacted clay. They do best in slightly acidic (6.0 to 6.5 pH), well-drained, moist soil rich with organic matter. Fertilize when new growth emerges in spring and again during the spring and summer until mid-August.

Figs need at least eight hours of sun a day and protection from the wind, which planting on the south or southeast side of a house or outbuilding provides.

Figs are produced on last year’s branches. For more figs, prune in a way that creates more branches. Wilson Brothers Gardens, at wilsonbrothersgardens.com, tells how:

In the fig’s first year, in late winter, prune the fig back to half its size. That will stimulate root growth and new branches, making the tree bushier.

In its second year, keep four to six of the strongest branches from the main trunk, and prune away the rest. Remove secondary branches that are growing at less than a 45-degree angle from the main branches. Cut the four to six branches you’re saving by one-third or one-fourth their original length.

Figs in the kitchen

Figs go well in many foods, from appetizers to the meal to dessert.

Darlene Thielman of Atlanta, who said she is planning to move back home to the Henry-Patrick counties area soon, recommends adding some fig jam to a grilled-cheese sandwich.

Barbara Lohr of Ridgeway said her brother’s wife, Yvonnne Maydian, “made the best fig cake.” Her sister-in-law is from Ireland and now lives in Covington. Lohr shared the fig cake recipe from Southern Hospitality, which should reproduce that cake, she said.

Phyllis Spears of Bassett traditionally has done a great deal of canning, and in 2007 she shared several recipes with the Bulletin, including one for Strawberry-Fig Preserves, reprinted here.

However, figs are so good fresh, why bother to go through the trouble of preparing them? “Sooooo good,” said Betty J. Kanipe of Martinsville. “My paternal granny had a bush near the well. I loved picking them off the bush and eating – yum.”

Preheat oven to 350 degrees and grease and flour a Bundt pan.

Bake at 350 degrees for 30 to 45 minutes, checking for doneness with a toothpick.

Bring all ingredients to a rolling boil and cook 3 min. Allow glaze to cool before drizzling over cake. Use toothpick to poke holes in cake, so glaze can go down into it.

Stir all ingredients together in a medium bowl until thoroughly mixed. Cover and let chill in the refrigerator for half an hour.

Once chilled, roll into 1-inch balls. Store in an airtight container and keep refrigerated for up to 1 week.

If using fresh figs: Scoop out about 1/2 teaspoon of the center of the fresh fig (this is where the blue cheese is going to go). Trim off about 1/8-inch of the curvy end of the fresh fig half so that it sits nicely on the serving plate. For dried figs: place fig halves on serving plate cut side up.

Cover and store in the refrigerator until ready to serve.

Figs are just starting to develop on this fig bush in Henry County -- but no one ever noticed any flowers beforehand. That's because flowers grow inside each fig. Where figs grow naturally -- in regions which don't get cold -- those flowers are pollinated by wasps which enter the fig through a tiny hole in the bottom, but figs sold commercially in the U.S., and grown in home gardens, are sterile types which don't involve wasps.

Dr. Kal Ivanov, assistant curator of invertebrate zoology at the Virginia Museum of Natural History, holds up a sifter used to collect insects. Ivanov explained recently about fig wasps, which pollinate figs in the wild.

Flowers are beginning to form inside this immature fig. A fig contains many flowers inside which, in other parts of the world and in the southernmost tips of the U.S., are pollinated by wasps which enter the fig. Figs grown commercially, and in home gardens, are non-pollinating types which don't involve wasps.