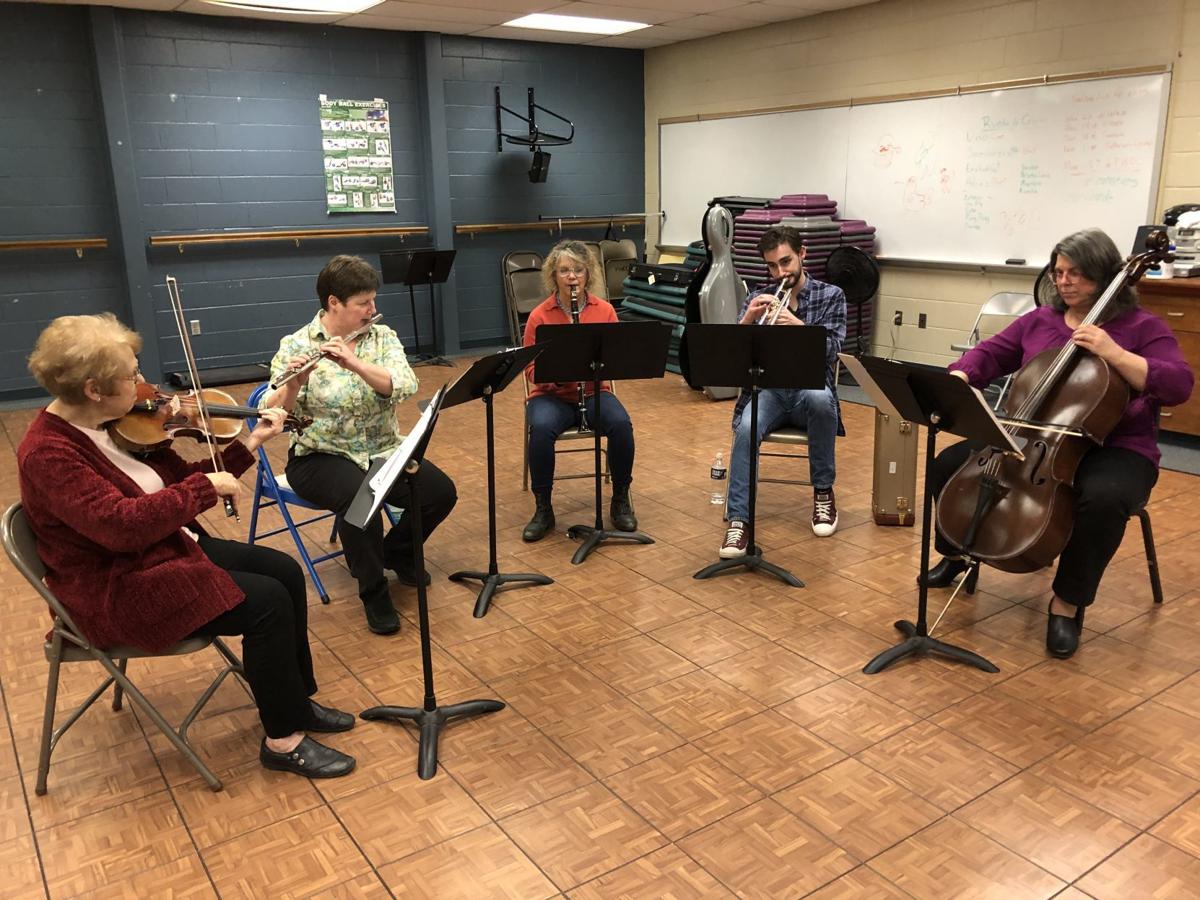 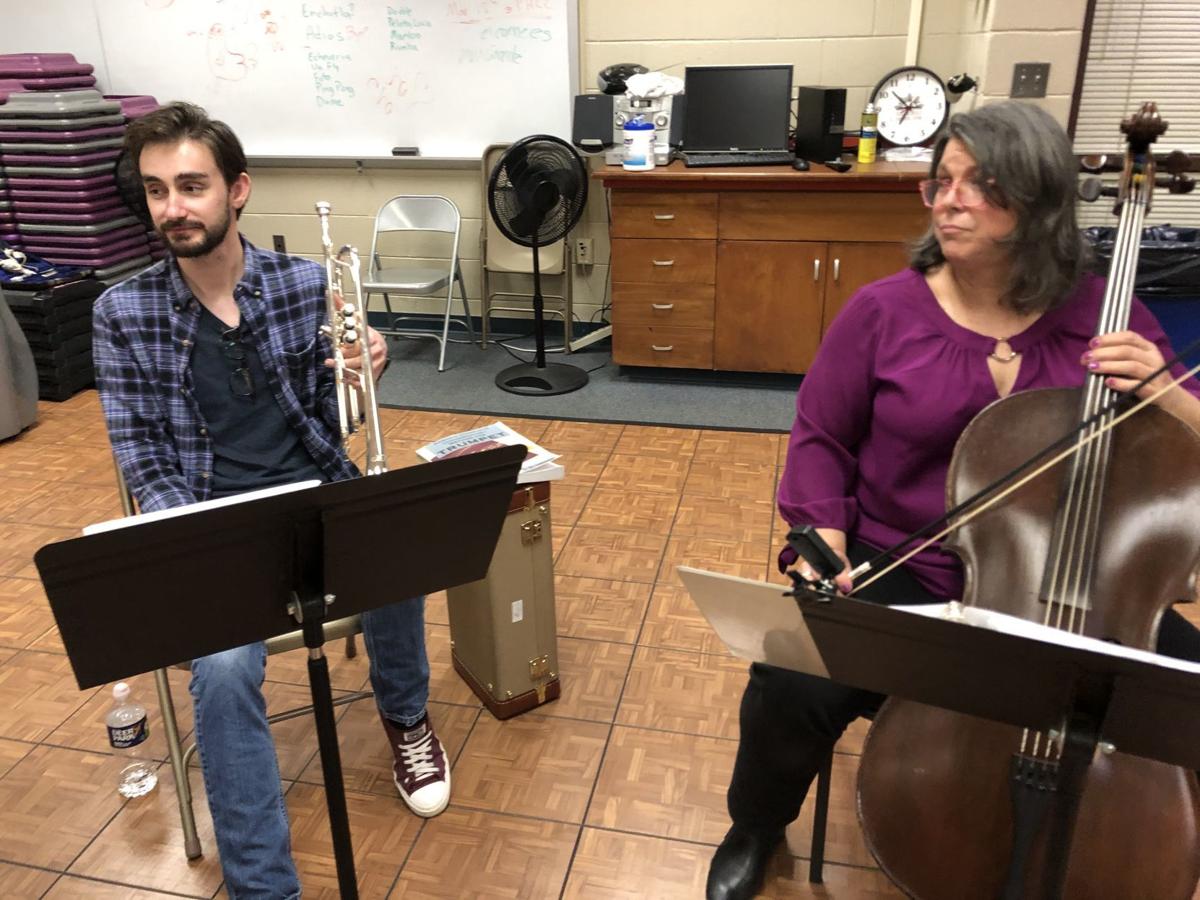 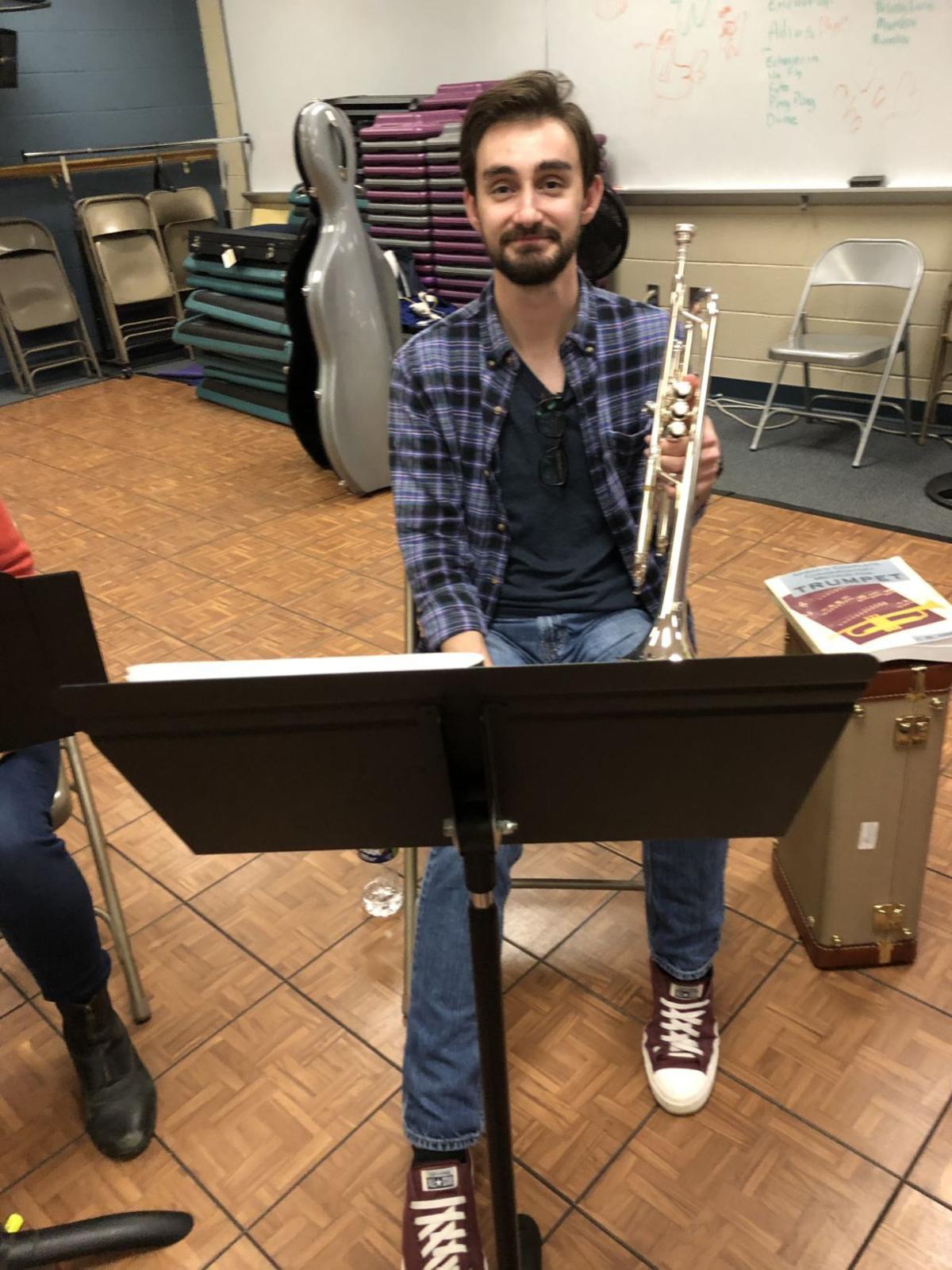 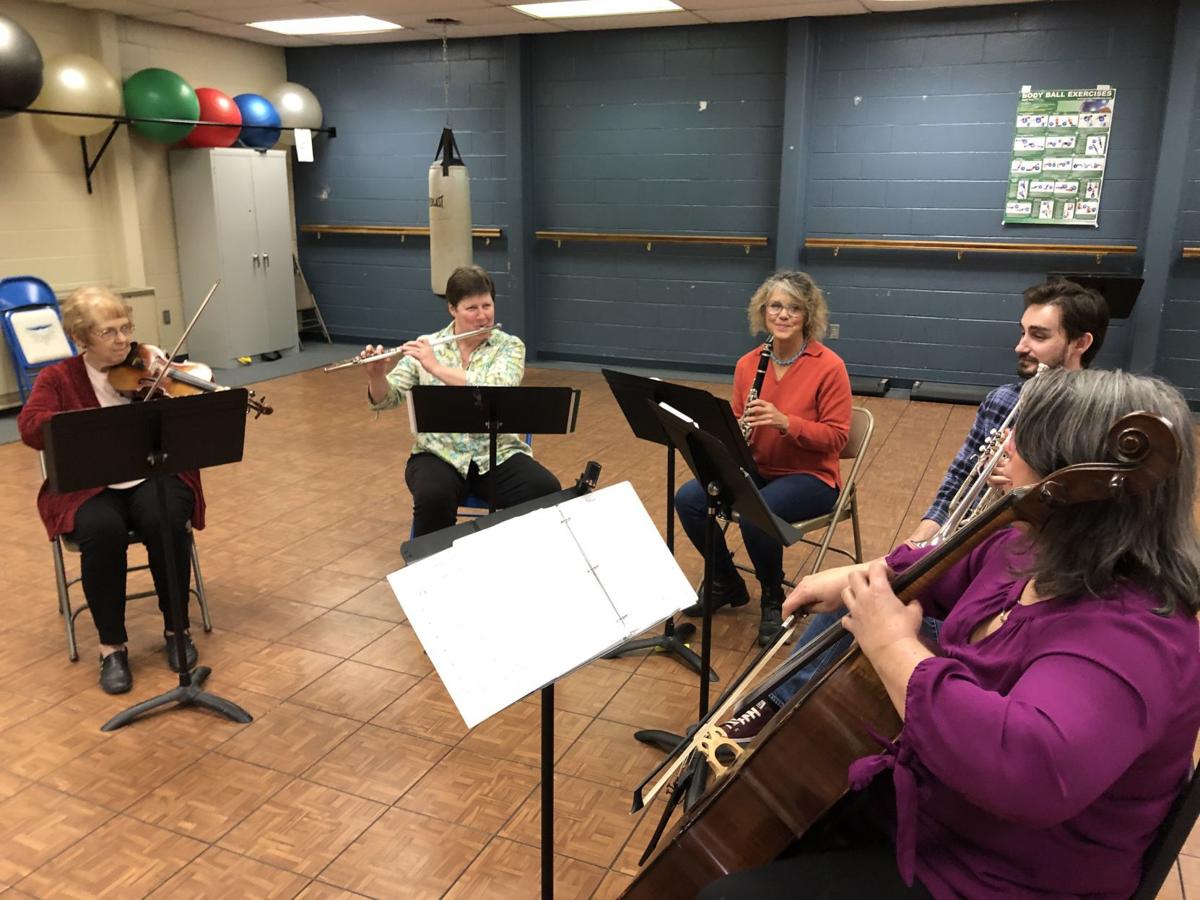 The world premiere of new music will be performed Sunday at the Chamber Music Recital series concert at Patrick Henry Community College.

The piece, “Carnival Fragments,” was composed especially for this program by Ridgeway native Zachary Margrave, a recent graduate of Roanoke College.

“He kind of cringes when I say that, but technically it is a world premiere,” director Deborah Burgess said with a chuckle.

Chamber music features only one of each kind of instrument, Regula Dailey of Ridgeway said, and often is performed in more intimate settings than large concert halls.

For musicians who may be accustomed to playing one of several of the same types of instruments in an orchestra, “it’s very exposed,” said Amy Stuart of Bassett. “For a lot of people who played in a [bigger] band, it’s a shock. It’s intimate. It’s vulnerable.”

The musicians will be Virginia King on violin, Dailey on flute, Burgess and Amanda Donley on clarinets, Margrave on trumpet, Stuart on cello and Katie Mitchell on piano.

The concert, “Great Unknowns,” features compositions and arrangements by some lesser-known musicians, including three from the Martinsville area. A composition is entirely original music, whereas an arrangement is a reworking of existing music to suit a particular combination of instruments.

Along with Margrave’s new piece are two original compositions by Sandra Ford: “Song for Flute” and “Pastorale.”

Locally produced arrangements will be a clarinet-and-cello version of “What Wondrous Love” by Amy Stuart and “Be Thou My Vision” for violin and piano by Ford.

Other pieces will include “Minuet Op. 56 No. 2” by Franz Danzi, “Larghetto from Quintet No. 1” by Giuseppe Cambini and “Warm as an Autumn Breeze from Ballad of Baby Doe” by Douglas Moore.

Margrave is a 2015 graduate of Magna Vista High School and a 2019 graduate of Roanoke College, with a major in music composition. He works at the Collinsville library and plays trumpet freelance.

During his studies, “I had to learn the rules of every style” of music going as far back as the Middle Ages, he said.

Composing music “is a lot of time spent alone at the piano, and a lot of hurt feelings when you sit down with the instructor” for critique and criticism, he said.

When he composed a piece in school for his senior ensemble project, he said, he had to scrounge up any musicians willing to help him out – then create the piece specifically for those instruments. It was quite the challenge to write a piece for trumpet, bassoon, trombone, tuba, vibraphone, marimba, clarinet and piano.

To create a piece, he starts playing his ideas on piano, then takes “certain notes and assigns them to different instruments,” he said. He jots down the musical notes on paper, then enters the score into notation software.

Since he finished college, he played in his first Chamber Music Recital in the fall; Sunday’s will be his second.

“Our last concert we did — ‘Familiar Friends’ – tunes people would recognize in a heartbeat,” Burgess said. “This time, we thought, ‘Let’s do composers that nobody’s ever heard of. … We have a bunch of local people who write things, so throw that into the mix.”

She asked Margrave “if he would write something specifically for this group,” she said.

As she was getting to know him, she said, Margrave had told her he was writing a score for a video game. “When he came in and was always prepared and took our rehearsals seriously, I said, ‘Would you be interested in doing this?’ He just lit up. I thought it was very cool.”

The piece he wrote for Sunday, “Carnival Fragments,” was loosely inspired by “Visions Fugitives” by Sergei Prokofiev. That music, from Russia, “is a series of short piano pieces. It feels like you’ve been thrown into the middle of someone else’s dream, then ripped out of it. It’s quirky and abrasive,” Margrave said.

In the fall, he started to write his own piece with that type of flair.

His composition “is really challenging,” Burgess said, especially for the group’s “smattering of all different levels of talent.”

“He changes meter in it a lot,” Stuart said. “We’ve had to really work on it to do it justice.”

Margrave faced his own challenges with it, too, he said. He wrote it for the specific instruments that were in the group. After a French horn player and another cellist dropped out, he had to rework the whole piece around those two missing instruments.

Composing for the Chamber Music Recital “was a good opportunity for me,” he said. “I think it was a good experience … It helped develop my understanding of music in my head, performed by real people.”

Like many familiar hymns, “What Wondrous Love” originally was a sailor’s ballad, passed down through the generations, Stuart said.

“They sanctify these old drinking ballads. That melody is turned into a hymn,” which it’s known as today, she said.

In the early 1800s, “What Wondrous Love” was arranged as a hymn and first published in Virginia. Stuart arranged it for clarinet and cello so that she and Donley, her sister, could play it at a homecoming service at Woolwine United Methodist Church.

Ford, a local resident, composed “Song for Flute,” which Dailey will play on flute with Mitchell on piano, and “Pastorale,” featuring King on violin, Dailey on flute, Burgess on clarinet and Stuart on cello.

King also will play “Be Though My Vision” on flute, with Mitchell on piano, arranged many years ago by Ford.

“This is a folk tune,” King said. “I heard it sung with a choral group … and was anxious to play it on the violin.”

She asked Ford, a longtime friend, to write her the music for violin. Ford’s arrangement has been published, and King has played it often, in many different places, she said.

Burgess and Terrence Taylor will sing during Sunday’s program. Taylor, a Henry County native, was one of Amy Stuart’s music students, Burgess said. He has returned to the area after getting his master’s degree. He teaches at Bassett High School and sings with the Smith River Singers.

“He’s a very promising singer. I’m glad to have him,” Burgess said.

WHAT: A program of new music called “Great Unknowns.”

WATCH NOW: Your friends and neighbors are sending their voices and perspectives worldwide through the exploding world of podcasts

Some of your friends and neighbors are being heard the world over on their personally produced podcasts.

The news came as a disappointment, but not necessarily a shock, when the Martinsville Speedway announced in May that there would not be a Cele…

WATCH NOW: You still can participate in summer programs at the Blue Ridge Regional Library

The Summer Reading Program is on at local libraries, although most people don't seem to realize it.

'This is why I want to help:' Martinsville nurse runs to front lines of COVID-19

When Tonya Waddell, an RN dialysis nurse at Fresenius Kidney Care in Martinsville, first heard about COVID-19, she didn’t shelter in place. Sh…