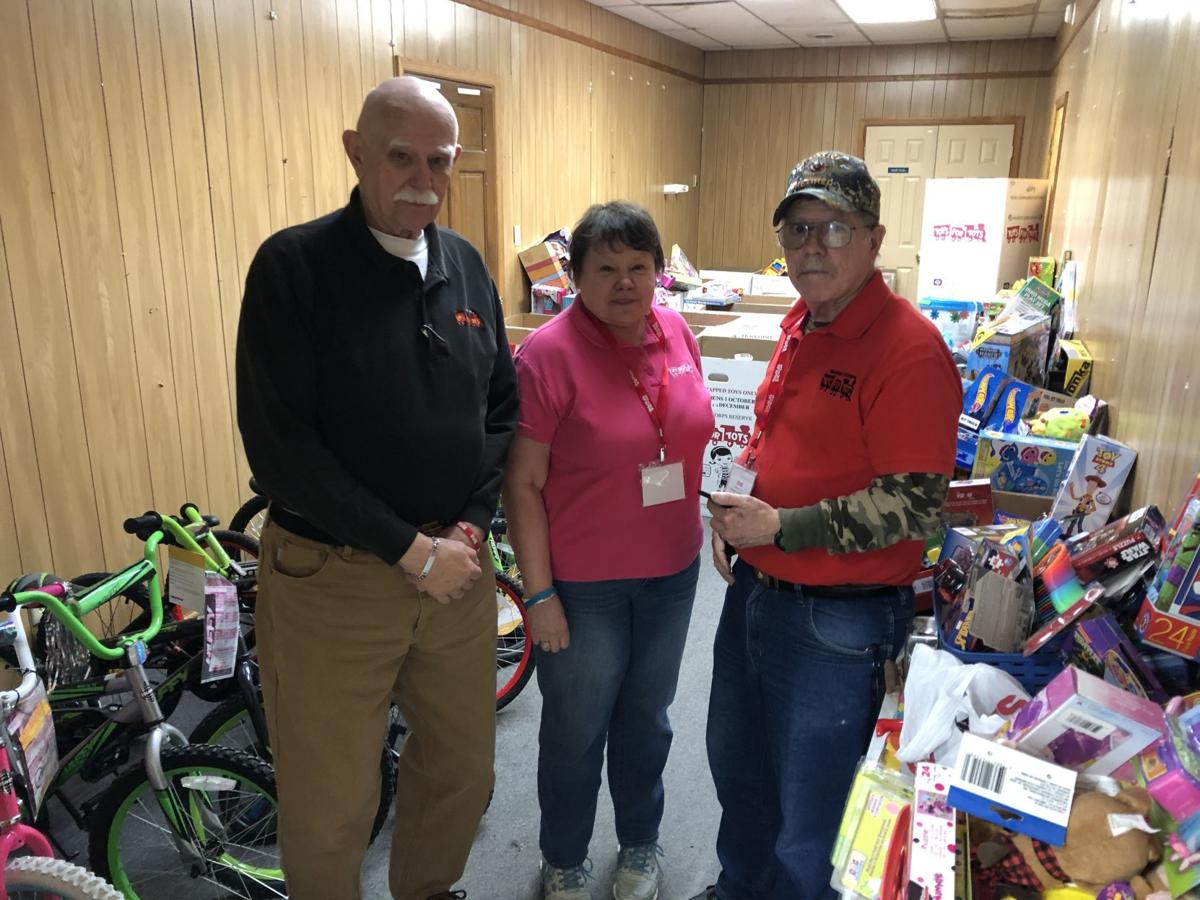 At Toys for Tots, Paul Shivley (from left), Sheree Washburn and Charles Washburn are among the 28 volunteers who help make sure area children get Christmas presents. Fifty-six large boxes, including those in the room, were distributed around the community to collect toys. 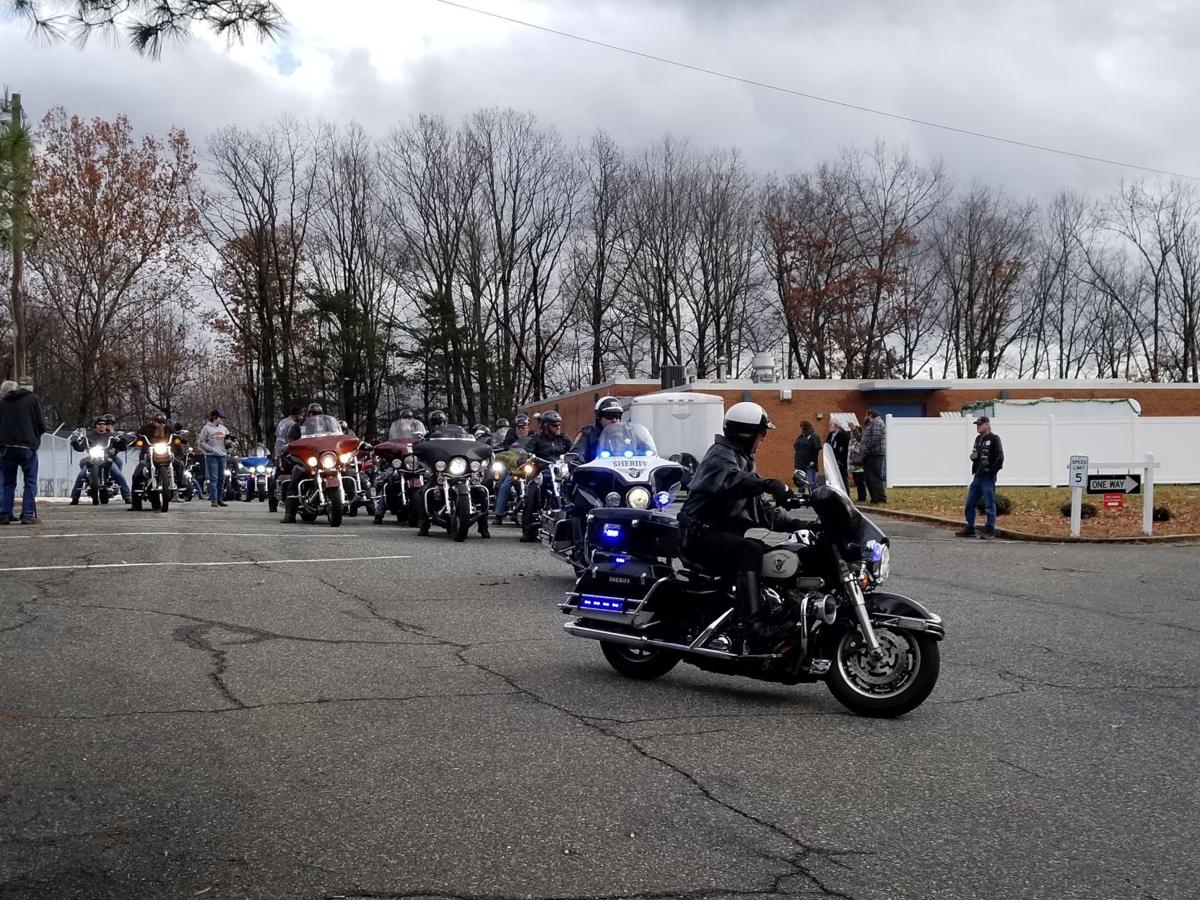 Riders leave the Elks Lodge in Martinsville on the 2020 Big Bird Toy Run, which generates donations of cash and toys for the Christmas Cheer campaign. 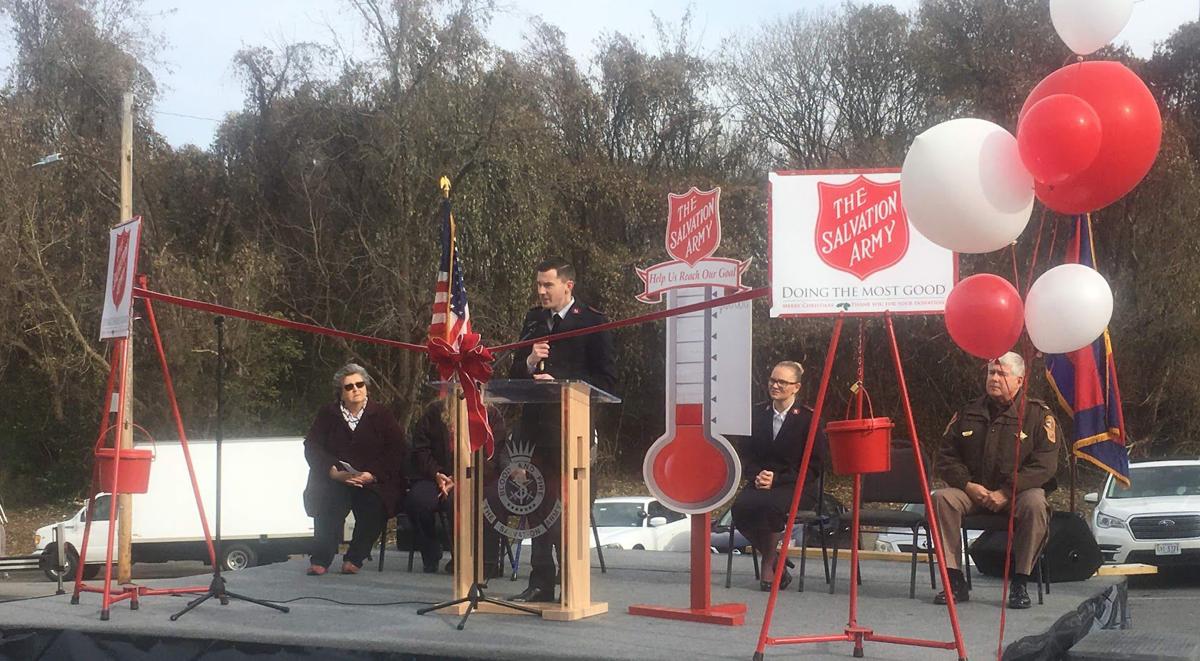 The Martinsville-area Salvation Army's annual kettle donations are not close to reaching the goal of $60,000.

The real elves of the Martinsville-Henry County area are out this week delivering the donations of thousands of local Santa’s helpers.

The volunteers of Toys for Tots, Christmas Cheer and Salvation Army are distributing toys for children and boxes of food to make the holidays brighter for more than 1,000 local families.

Recipients will include 850 city and county children of 292 families receiving gifts through Toys for Tots. The local detachment of Toys for Tots covers also covers Danville and areas of Patrick and Pittsylvania counties, helping a total of 727 families.

In the detachment’s first year, “we had 18 handwritten-note requests,” Shivley said. “Last year it was 549 requests.”

Toys for Tots is a Marine Corps Reserve charity, and Paul Shivley, coordinator for the PFC Edward W. Richardson Detachment Marine Corps League #908, said he has been with the detachment for 20 years.

Anyone can be a member of the Marine Corps League, he said, but only honorably discharged and fleet Marine Corps can vote.

Toys for Tots gives gifts for children from infancy up through age 13. Families make requests online at Martinsville.va.toysfortots.org.

The applicant gives the name, age and gender of each child. In mid-November, the organization emails parents or guardians the dates when they could pick up toys.

Starting in October, boxes to receive donations were set up in 56 locations. By Tuesday, volunteers had taken those boxes to the Toys for Tots office at 3408-1 Virginia Ave.

As parents come into the office, they show their email and photo IDs. Sheree Washburn checks them in, then gives their information to a volunteer who gets the toys for the family. The parents sign receipts for the toys when they receive them.

No particular toys stand out as more popular than others, Shivley said, but rather they have received “all kinds of things.”

There have been a larger-than-normal number of children in the age range of 7 to 13, he said, so they have made several trips to buy additional presents for that age group at local stores.

Toys for Tots also donates toys to Christmas Cheer. “We made a commitment to help them” since the local Toys for Tots detachment started, he said.

Any toys left over from this year’s collection will start the Christmas 2020 campaign.

Shivley is retired as a franchisee for Taco Bell, which was in the Collinsville Plaza. Since that Taco Bell closed six years ago, the building’s owner, Adkins Construction Company, has been letting Toys for Tots use a space in the plaza at no charge, he said.

“They have been very gracious,” Shivley said.

Christmas Cheer is helping more than 750 local families have brighter Christmases this year.

Applications were taken in November, and “crews have been packing toy boxes and food boxes since then,” coordinator Ralph Lawson said.

This year’s Christmas Cheer application office was in the Leatherwood shopping center next to Food Lion.

Christmas Cheer organizers compare their client lists with the Salvation Army’s as well as the Elks’ Lodge, which has a similar charity, Lawson said, so they don’t overlap on clients.

Although Christmas Cheer takes contributions throughout the year, Lawson said the holiday season through the second week of December is the biggest window for donations.

Two major fundraising events were held last weekend: Big Bird Toy Run, which raised $5,268 and delivered toys, and a private Christmas party at which guests make donation to Christmas Cheer and the Salvation Army, which raised $8,900 with more expected to come in, Lawson said.

The group has “spent over $10,000 on toys alone” as well as bought an entire tractor-trailer full of food, Lawson said.

The big day for packing food boxes was Dec. 7, when about 75 volunteers put a wide assortment of groceries into 700 boxes.

Volunteers also chose gifts for children based by age and gender. Kids also receive a stocking cap, gloves, scarves and sometimes socks, and diapers are given for babies.

Clients started picking up their boxes on Wednesday.

She said that’s spread out over Martinsville and Henry County and also including Franklin and Patrick Counties.

The number of families helped “is significantly lower than we have had in the past,” she said, adding that might be because of a new application system.

She said the application period previously was open for a month, but this year it was only for a week in each community.

The Salvation Army collects gifts for children through Angel Trees, Christmas trees that bear a Christmas wish list for each child. One tree was set up at the Salvation Army, and others were taken by businesses and schools throughout the area.

Mumford said in previous years the Salvation Army also has prepared stockings with additional gifts, but not this year Next year, they plan to give out bookbags filled with school supplies instead of the stockings.

Distribution of the gifts started Thursday, Mumford said. Any children whose names and lists were not taken from the Angel Trees are taken care of with purchases the Salvation Army makes using funds raised through its kettle drive.

In addition to helping with Christmas expenses, the kettle drive also helps support the Salvation Army with expenses throughout the year.

Noise for Toys brings in donations

Lowdown Dirty preformed last Saturday at the Noise for Toys, a concert at the Spencer-Penn Centre in Spencer to generate donations for Toys fo…

At Toys for Tots, Paul Shivley (from left), Sheree Washburn and Charles Washburn are among the 28 volunteers who help make sure area children get Christmas presents. Fifty-six large boxes, including those in the room, were distributed around the community to collect toys.

Riders leave the Elks Lodge in Martinsville on the 2020 Big Bird Toy Run, which generates donations of cash and toys for the Christmas Cheer campaign.

The Martinsville-area Salvation Army's annual kettle donations are not close to reaching the goal of $60,000.