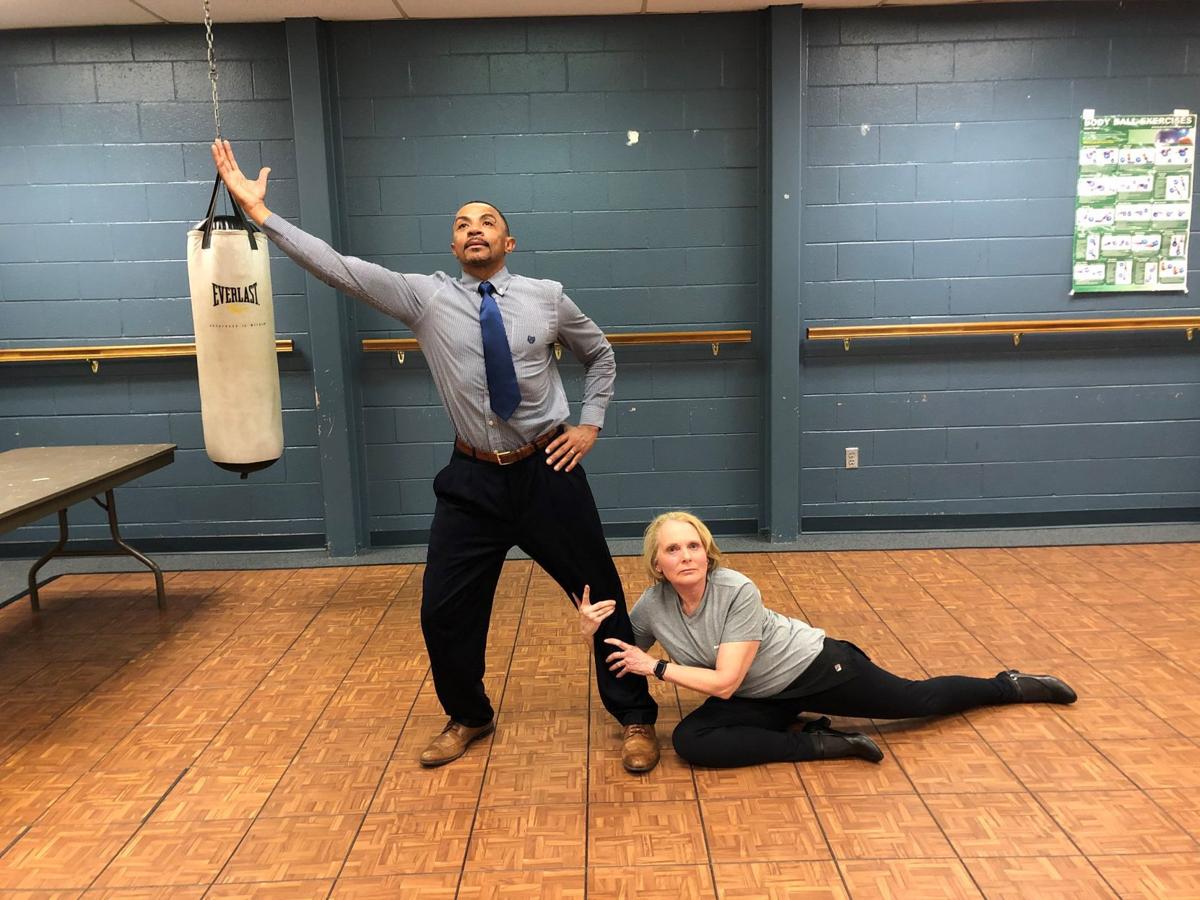 Gerald Kidd and Rebecca Crabtree practice the paso doble for Dancing for the Arts. Their choreographer is Jane Leizer. 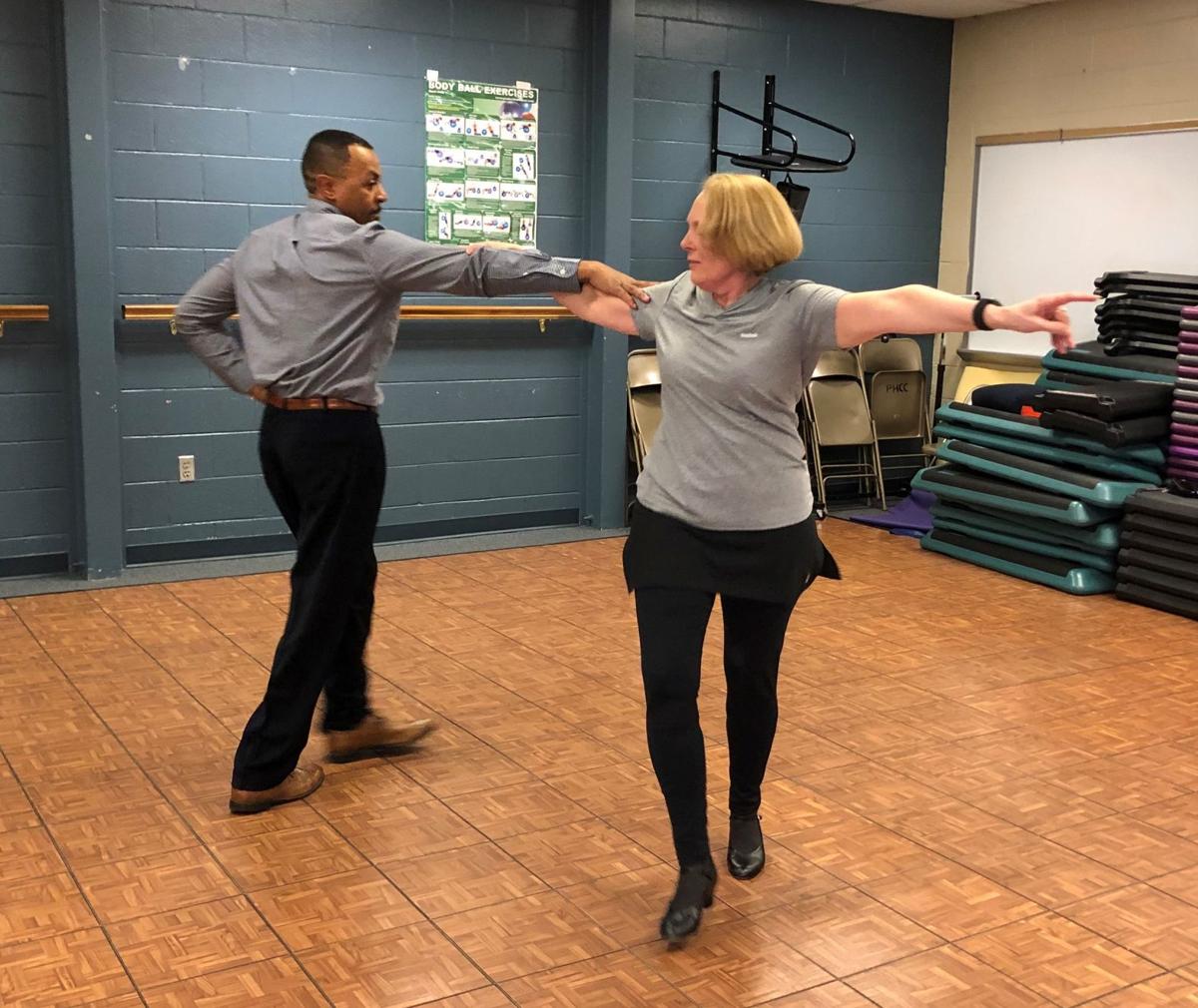 Gerald Kidd and Rebecca Crabtree dance the paso doble, a strong dance with determined steps, inspired by bullfighting, for Dancing for the Arts. Their choreographer is Jane Leizer. 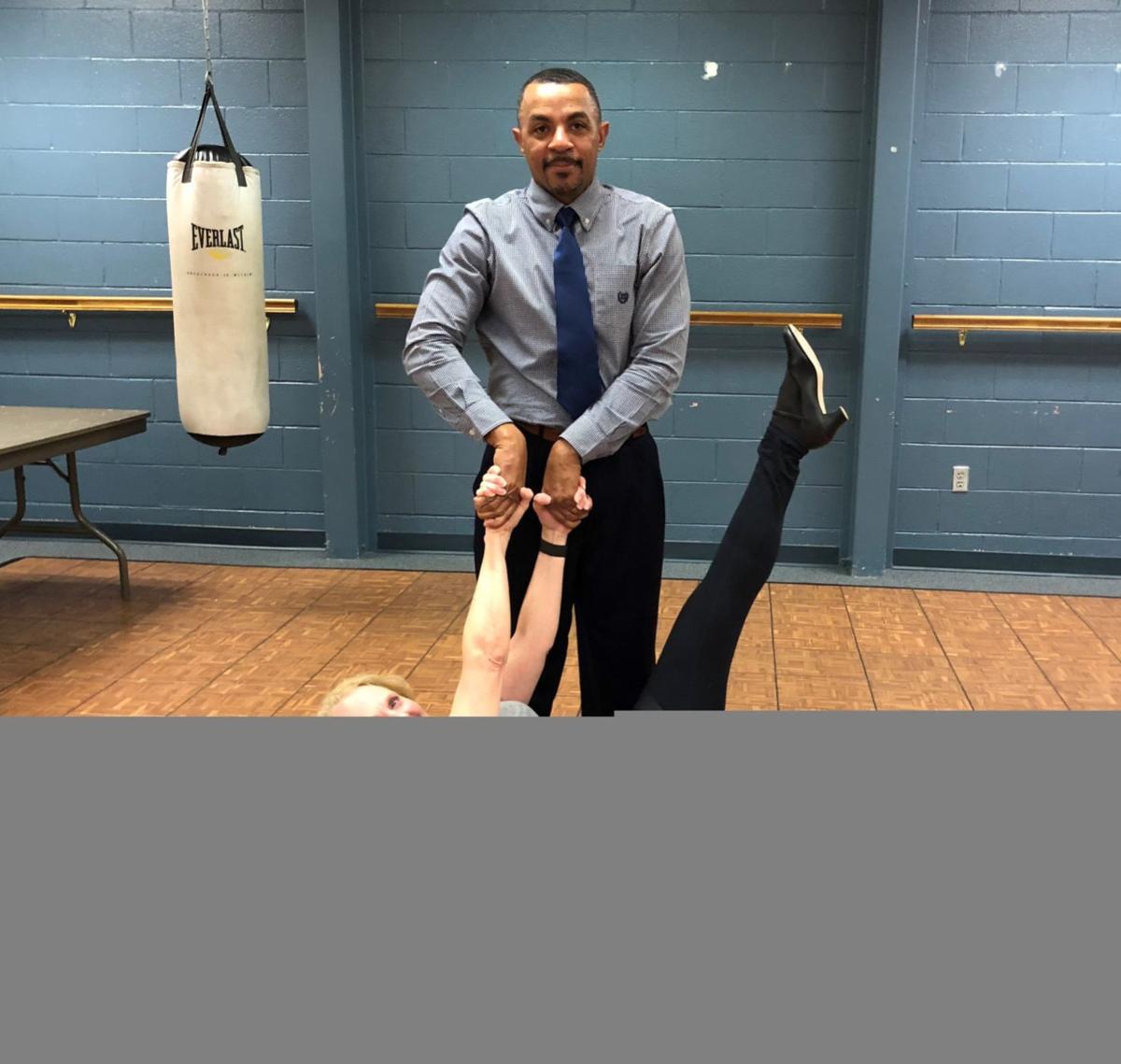 Gerald Kidd said he’s the luckiest of all the men in Dancing for the Arts.

“I got two of the best ladies. I knew them from high school,” where he works and they volunteer, he said, “but to be able to work with them at this level, I am probably the luckiest man in the dance.”

Kidd and Rebecca Crabtree will dance the paso doble and another freestyle dance during Piedmont Arts’ fundraising dance competition, Dancing for the Arts, which will be April 4 at Martinsville High School.

Their assigned dance is the paso doble, the serious, deliberate and strong dance based on bullfighting. They’re dancing to “Corrida de Torros” (Spanish for “bullfight”).

Their choreo.grapher, Jane Leizer, said she loved that song for the dance as soon as she heard it: “I loved how serious it was, and how precise it was. I thought it would be a great song for them.”

Their other song is Michael Jackson’s “Thriller.” They’ll dress as zombies, each wearing a sash reading “Mr. DFTA” or “Mrs. DFTA.”

Leizer really challenges them, the couple said, but they appreciate it.

“All those things you said, ‘Are you trying to kill me?’ Now you’re doing,” Leizer pointed out.

It’s a good thing that Kidd “is strong as an ox,” Crabtree said.

“We actually have stepped outside the box and doing some different things we are not used to doing,” Kidd said.

She laughed and said it is a good thing her husband is a dentist.

That would be dentist Mark Crabtree. They have two daughters, Sarah Jorgensen of Chesapeake and Virginia Crabtree, who is nearly finished getting a master’s degree in speech pathology and communications disorders from the University of Georgia, and the family includes Shane Spencer, a freshman at Old Dominion University. Their granddaughters are Carter Grace, 3, and Barrett, 7 months.

Crabtree “volunteers for everything in Henry County and Martinsville,” Leizer said.

She is on the board of the SPCA and a volunteer at the SPCA’s fundraising shop, Fido’s Finds and Kitty’s Kollectibles, especially when it comes to posting pictures of items for sale.

At First United Methodist Church, she teaches Sunday school for special-needs adults; sings in the choir; volunteers with the Lunch Bunch meal program; and is a founder of the puppet team.

Leizer and Crabtree started Martinsville High School’s after-prom party fundraiser Mr. Bulldog Pageant in 2005. “We raised a lot of money,” Leizer said: $12,000 with the first one.

The pair of MHS volunteers “are phenomenal with special needs kids,” too, Kidd said. These days, they bus the students to the YMCA for fitness activities.

Gerald Kidd and his wife, April Kidd, live in Laurel Park. They have one daughter, Ariel Kidd of Bassett, and two sons, Daquan Kidd of Greensboro, N.C., and Gervelle Kidd of Danville. Their grandchildren are Jordan, 8; Trace, 4; Lennox, 2, and London, 2.

Kidd is the dean of students at Martinsville High School, with the role of enforcing discipline. He also is the assistant pastor of Greater Canaan Land Church in Gretna, where he also teaches Sunday school.

He’s liable to be at school at any hour, there for various activities. He has coached softball for a couple of years.

In his free time, he likes to read, especially about sports, leadership or “anything inspirational;” going to sporting events, playing golf, being involved with church but especially being with his family, he said.

His only experience with dancing has been breakdancing when he was in high school.

Crabtree beats him a bit, with having taken Zumba classes, a semester of tap dance with Leizer a few years ago and “a senior citizens class” in 2007 at the Ray Hollingsworth Studio.

Plus, Crabtree added laughing, between two daughter she has “sat through 23 years of dance recitals,” and now she starting all over again with her granddaughter.

Born in the 1950s, her life has been through seven decades, two centuries and two millennials, she said, and Leizer nodded that it’s the same with her.

Crabtree said their team deserves the vote simply because of their ages.

Dancing for the Arts

Like "Dancing with the Stars," 50% of each team's final score is tallied from votes and 50% is tallied from scores awarded by the judges during the contest. Each vote costs $1, and people can vote as often as they want. The dollar value doubles by joining Piedmont Arts, or renewing or upgrading a membership. Voting will be done through the day of the event on Piedmont Arts’ website, www.piedmontarts.org. Votes also will be taken during the event

Local theater actor Brian Williams has learned that dancing is a whole lot different than acting.

Gerald Kidd and Rebecca Crabtree practice the paso doble for Dancing for the Arts. Their choreographer is Jane Leizer.

Gerald Kidd and Rebecca Crabtree dance the paso doble, a strong dance with determined steps, inspired by bullfighting, for Dancing for the Arts. Their choreographer is Jane Leizer.