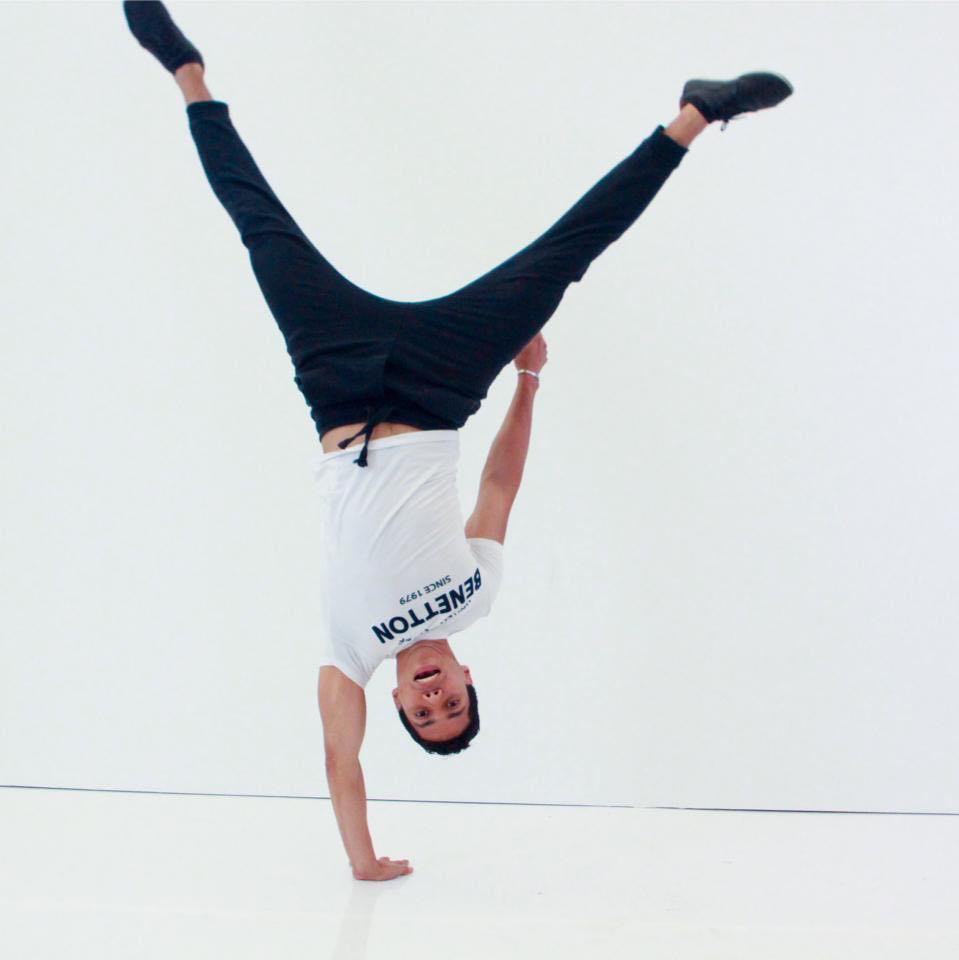 Ismael Cano teaches "International Rhythms" fitness classes at the YMCA and Gym 24 but now, like everyone else, he's isolated at home. He recommends keeping up with fitness through online exercise classes, drinking plenty of water and not losing one's sleep routine. 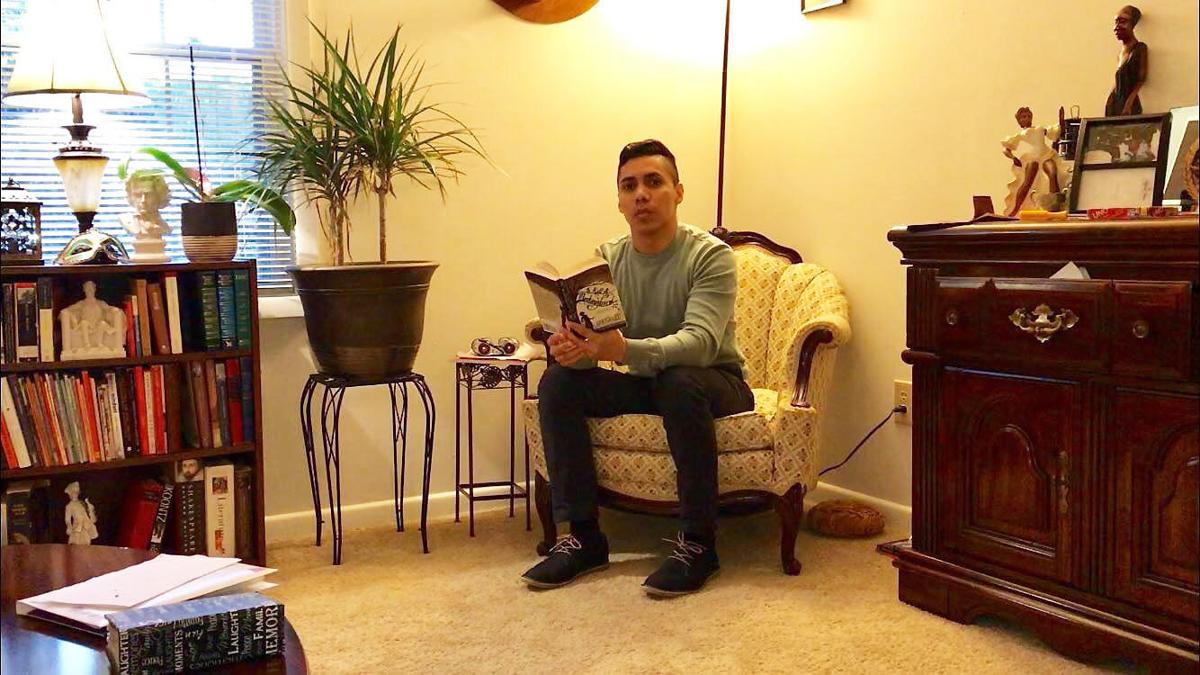 Ismael Cano, pictured here at his apartment in Martinsville, says this isolation period is a great time to take advantage of learning -- especially about other cultures and ways of life. Cano teaches fitness classes and works with special needs middle-school students. 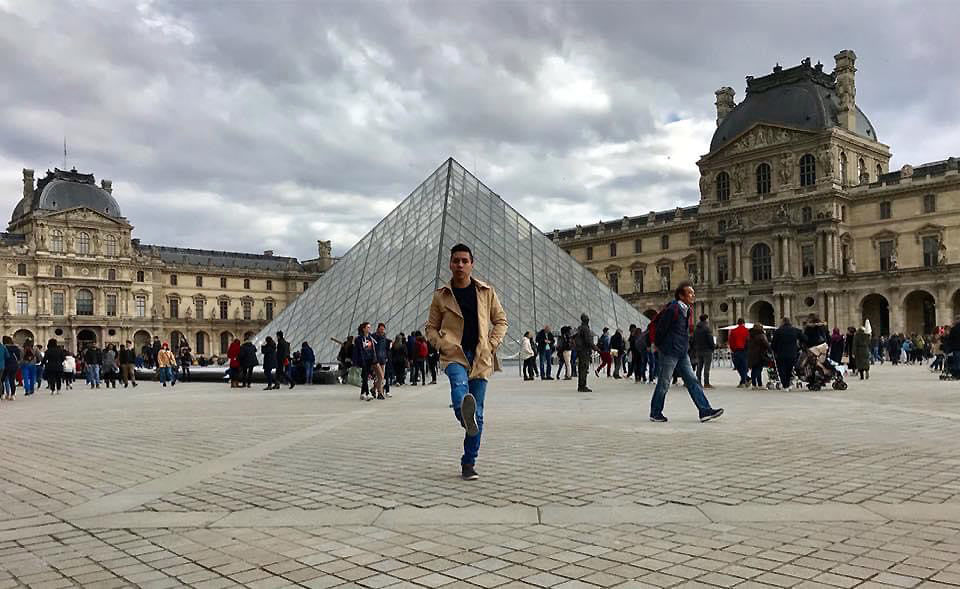 Ismael Cano travels as much as he can, including a recent trip to Europe, where his visits include to the Louvre (pictured here) in Paris, France.

Don’t let the isolation because of the coronavirus lead you into bad health habits, says Ismael Cano of Martinsville, who teaches exercise classes at the YMCA and Gym 24 and has some life lessons to share, as well.

In fact, he suggests, this could be a good time to focus on improvements in many different facets of life.

Both the YMCA and Gym 24 are closed now, but “I just stay at home doing some home exercises,” he said.

He had intended to post videos of himself leading classes for people to use for free, he said, but the videos he attempted this week were blocked because of copyright rules. He’s still trying to figure out how to use the videos, he said, but meanwhile, there are about 20 exercise videos on his YouTube channel, International Rhythms (https://www.youtube.com/channel/UCfZbDEf6bhduqQa3LPr-lBQ).

Cano also recommended doing fitness routines with all sorts of videos that can be found by searching YouTube, such as on yoga, Zumba and kickboxing. “You can also do push-ups, squats, jumping jacks, and trying to walk as much as” possible, he said.

Doctors recommend 30 minutes of cardio (exercise that gets your heart pumping) a day, but 60 minutes is even better, he said.

“Your best friend” in health is water, he said, and people should drink a lot of it.

“Drink a lot of water all the time. A lot of people drink too much soda. It’s something that I realized more in the U.S. that people do not like to drink water,” said Cano, who is from Mexico.

He also recommended avoiding bread and foods with sugar and being stingy with calorie-laden salad dressing.

It’s too easy to fall into bad sleep habits during a break like this, he said. It’s good to take advantage of extra opportunities to rest, but don’t lose the discipline of waking up on time.

“We do not know when this is going to be over,” he said, “but if they say tomorrow, and you are used to waking up late, it will be more difficult for you to wake up early.”

People who are stuck at home for the isolation period also should take advantage of educational programming on television or the internet, he said, especially about different cultures of the world.

There’s a saying in Mexico that if your life is in disorder, clean your house before doing anything else. A clean, orderly house gives a sense of accomplishment and stability – and what better time for that than now?, he said.

Cano grew up in the coastal state of Vera Cruz but for college moved to the booming metropolis Mexico City, population 8.5 million. He studied communications at Universidad ICEL.

Then he worked for TV Azteca, the second-largest television network in the country. He worked with the live audiences, bringing them to the shows and giving them tours of sets.

English is just one of several languages he speaks, all coming from a love of “languages and cultures and diversities around the world” he’s had since childhood.

His native language is Spanish, but as a child he took a few English classes, then continued studying the language on his own. He learned Portuguese during and after spending three months in Brazil teaching middle-schoolers. He also speaks basic Italian, from classes he took in college.

Aside from standard language lessons, he recommends that people learning a language watch TV shows in that language, but with the English subtitles on screen, and also listen to music – but being careful of slang and bad grammar.

He has traveled to many countries, including twice to several in Europe.

In fact, immersing himself into an English-speaking environment is a main reason he moved to Martinsville.

He got to know the area through his sister, who lives in Greensboro, N.C. However, when he moved to the U.S., Greensboro didn’t get his attention as a possible place to live because it has “more immigrants, so basically you are around immigrants all the time, and people don’t practice English” as much as he wanted to.

The first job he had in Martinsville was in a Mexican restaurant, “and I hated it, because customers around here are rude, and they don’t tip,” he said.

Many customers also seemed disrespectful to service staff, he said: “I don’t know if they don’t like Latinos, or Hispanics, or what. People don’t have manners or have manners and don’t want to use them with you because they think they are better than you,” which is actually worse than ignorance of manners to begin with.

Cano has been teaching exercise classes, a style similar to Zumba (although he also is licensed to teach Zumba), since he was in college, he said. In 2017, he started teaching a Latin Rhythms exercise class at the YMCA. Later, he also began teaching something similar at Gym 24, and until those gyms closed beause of the coronavirus isolation, he had been teaching at both.

In 2018, he began working as a paraprofessional at Laurel Park Middle School with special needs students.

Last year, he worked with “kids that cannot control their emotions, kind of disrespectful to other people, but I love them and they love me. I think they know I care about them, so they respect me a lot,” he said. “Sometimes people think these kids are mean … but they don’t understand their backgrounds. These are really good kids, really smart.”

This year, he worked with students with autism and other types of disability. “They cannot talk but are super smart. They learn in a different way,” he said.

Cano said he figured his traveling and comfort with other cultures helped prepare him for working with those types of students, “because I know that everybody’s different,” and it’s a matter of context and understanding.

He also works for MHC-After 3, an educational and experiential after-school program.

Overall, Cano says, these days of isolation provide a time of reflection and redirection. As an offshoot of families’ being stuck at home through the weeks, “I hope the parents realize how important teachers are in the life of their kids, and I hope they understand better that sometimes the teacher is not the problem” if kids misbehave.

It’s also a time to think about who the real heroes are: doctors, nurses and grocery store workers, who provide our basic needs.

People should understand the value they give to life, he said, and stop idolizing people who are famous just because they have led scandalous lifestyles, such as Kim Karadashian. She is a millionaire, “famous for what? She does not do anything.”

Finally, “I hope that people that are fighting in the Walmart or Food Lion for paper towels realize and they understand the feeling of people coming from other countries, because they don’t have anything in other countries,” he said.

The empty store shelves in the area now, and difficulties in finding what you’re used to buying on a regular basis, is just a taste of the inconveniences and scarcities common in other countries, he said.

“Just imagine – you are fighting over the paper towels, so just imagine someone who doesn’t have food,” he said.

Ismael Cano teaches "International Rhythms" fitness classes at the YMCA and Gym 24 but now, like everyone else, he's isolated at home. He recommends keeping up with fitness through online exercise classes, drinking plenty of water and not losing one's sleep routine.

Ismael Cano, pictured here at his apartment in Martinsville, says this isolation period is a great time to take advantage of learning -- especially about other cultures and ways of life. Cano teaches fitness classes and works with special needs middle-school students.

Ismael Cano travels as much as he can, including a recent trip to Europe, where his visits include to the Louvre (pictured here) in Paris, France.