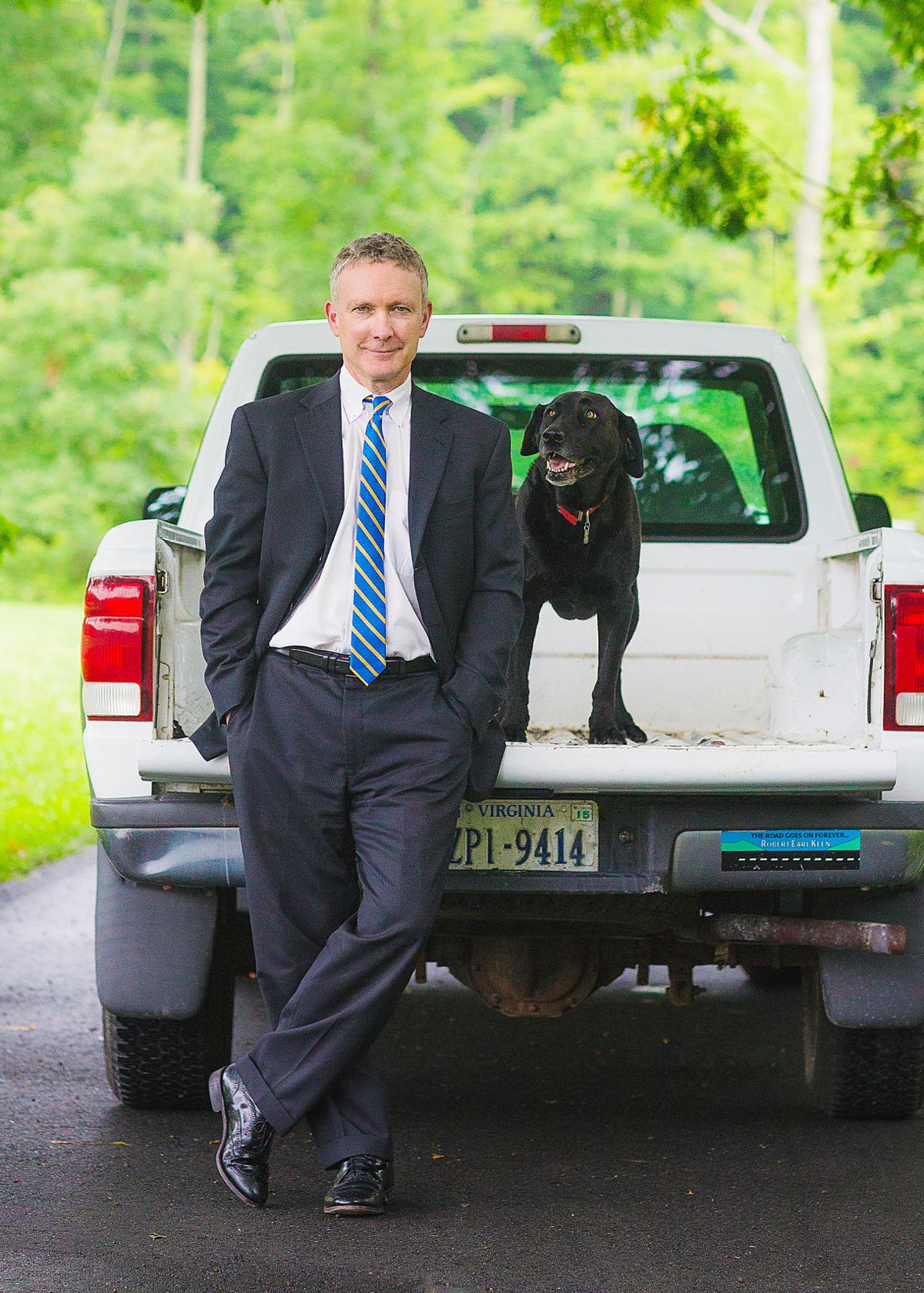 The books of Patrick County author Martin Clark are set in the local area, and many of their supporting characters are real people. His main characters also usually have a pet dog, as the author does in Eudora Welty Clark, "now almost 14 and still a joy," Clark said. 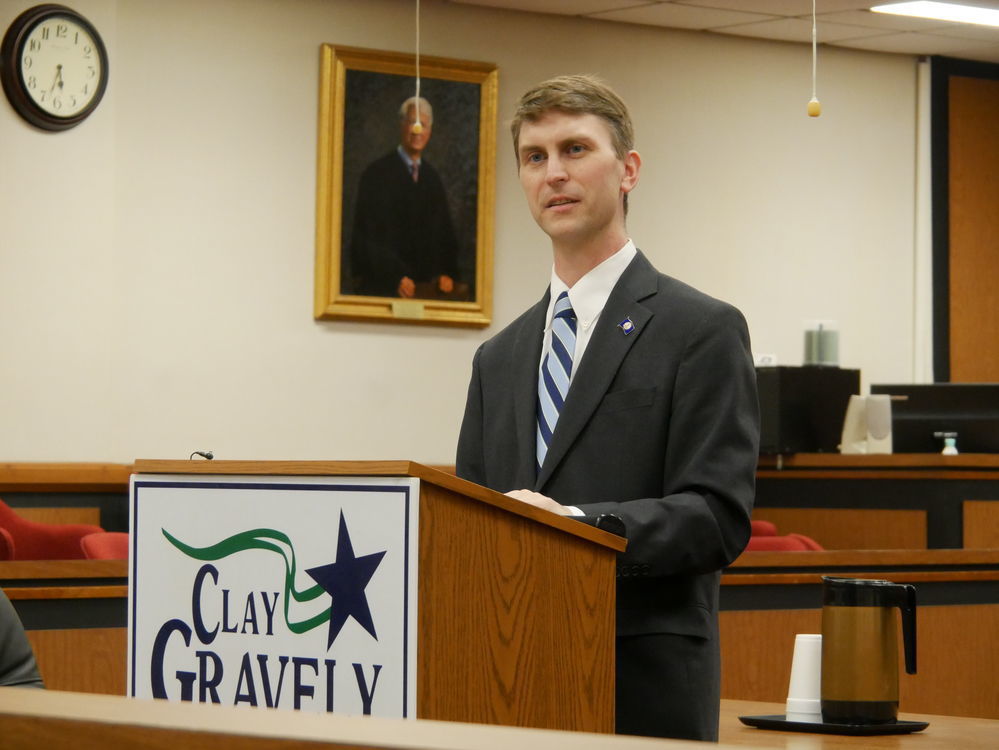 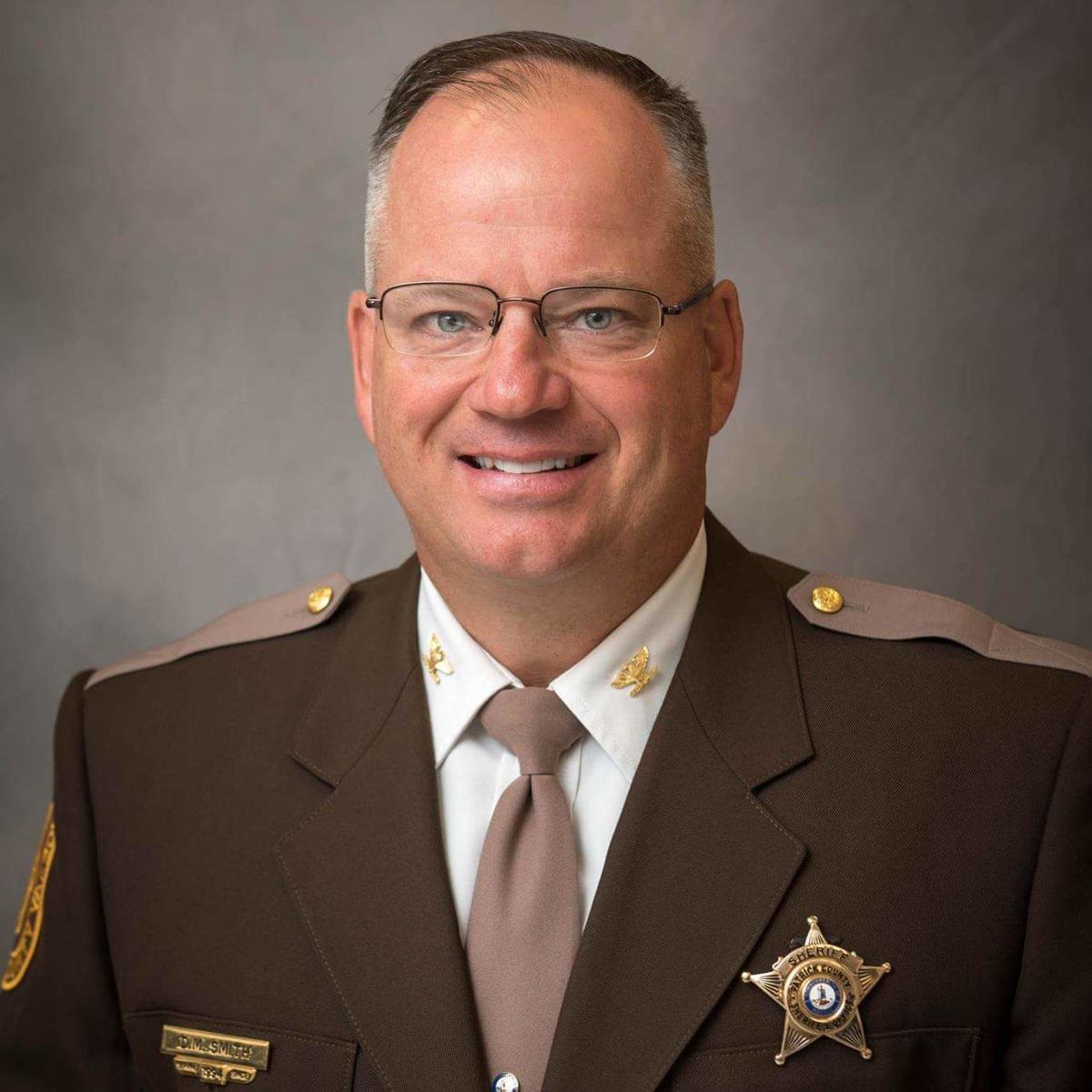 You might recognized Patrick County Sheriff Dan Smith in the pages of Martin Clark's latest novel.

Although Martin Clark’s novel “The Substitution Order” is fiction, you may run into some of its characters around town.

The book is about down-on-his-luck, disbarred attorney Kevin Moore, who is the target of a scam. After his law license was suspended, he moved from Roanoke to Patrick County, where he worked in a sub-sandwich shop.

Kevin is purely made up, but Kevin’s attorney, Ward Armstrong, and the judge who tries his case, David Williams, are not.

Then there’s Patrick County Sheriff Dan Smith, who is described in the book as “a thoughtful, trustworthy man who runs a disciplined office.”

Clark said when he writes real people into his books, they are people “I like really well.” Any unsavory characters are purely invented.

Judge David Williams “is one of my best friends, and he is also a great judge,” which is how the book portrays him, Clark said.

Williams also helps Clark by reading drafts of his books before they are published. “He reads a lot. He’s very smart, a second set of legal eyes” make sure the legal matters in each book are correct, Clark said.

Williams joked that he has “been pestering for years” for Clark to put him in a book.

He hasn’t read the book yet, Williams said, but he read most of the rough draft as Clark was writing it.

“It’s sort of fun to see yourself in print, but the thing Martin does, to his credit, is if it’s somebody local that he’s putting in a book, they’re always a good character. He never makes anybody a villain; but it gives sort of a local flair to what’s going on.”

From having read Clark’s earlier books, “you can sort of tell from the rough draft to the finished product how much work he has to go through to do it,” Williams said.

“Ward Armstrong’s name – isn’t that a great name for a character?” Clark asked, laughing, and added that it’s such a great name that out-of-towners probably would assume it’s made up.

It’s not the first time local attorneys have represented Clark’s fictional characters: Pat Sharpe and Jim Haskins did in one book, and Robert Williams was the lead lawyer in another.

“That’s a nice little nod to the area, and all those folks are great lawyers,” Clark said.

Some of his references are harder to recognize: There are “some really inside jokes maybe two people will get,” Clark said. In “350 pages there’s a little room for some fun, as long as it doesn’t bury the plot.”

However, the name-dropping is for more than just fun. Because his books are set in real communities, read not only by a national audience but also by local residents, references to local people keep the books realistic. Using fake names in roles people are familiar with would interrupt local readers’ flow with the book.

Using fake names “stops you in your tracks and you say, ‘This is made up,’” Clark said. “The principal reason is to ensure that readers invest in the story in a real way.”

The book’s prosecutor, Martinsville Commonwealth’s Attorney Randy Clay, may remind you a great deal of the late Clay Gravely, who held that post.

Trying to rebuild his life, Kevin is targeted in a scam in which set-ups send him through more legal troubles. Randy Clay is clever and diligent in his legal attack on Kevin, yet remains honest and professional.

On Page 315, at his trial, Kevin tells Judge Williams, “I’m in debt to Mr. Clay for his professionalism and sense of fair play throughout this matter. Both my lawyers, Mr. Armstrong and Ms. Mulberry, have been excellent.”

People who work on opposite sides of court cases still can like each other personally, Williams said (by phone on Monday, not in the book): “It’s the nature of the beast. It’s an adversarial position. You have to present the fullest extent of your case … hopefully, somewhere in the middle, justice comes out.”

In the Acknowledgements at the end of the book, Clark writes about Clay Gravely and his death in 2017 at the age of 40.

“He was my friend,” Clark wrote. “Clay battled cancer and never bitched or moaned or complained about his miserable luck. I told him he was in the book by name, even read him a riff or two that had him speaking. He was a darn good commonwealth’s attorney. In the best possible way, he was also a fierce smart-ass with a sharp tongue and the finest eye roll in the business.

“After his death, I worried that a larger audience might misconstrue my affection for him, so I cut several of the courtroom zingers and acerbic one-liners, changed the name, and made the character much more of a composite. That said, there’s a lot of Clay Gravely – especially his sense of fairness and his generous view of the world – in the Randy Clay character, and I hope his family will still recognize flashes of the genuine article and think I did right by him.”

Clay Gravely’s widow, Jennifer Gravely, seems to think so. After she read passages of the book, she wrote by email: “I never saw Clay in action, in court, but reading this excerpt today, I could hear every word he spoke, see every movement and mannerism as if I was there. It brought me to tears.

“Although Clark claims this to be a composite, I think he hit the nail right on the head. Clay was assertive, but deferential, witty and quick on his feet. He certainly didn’t take trial tactics personally, but he also wasn’t going to be taken advantage of. I am so thankful Clark took the time to acknowledge him in his book. It’s yet another medium our boys can use to get to know their father better …

“I’m so glad Clay’s sense of fairness, his moral compass, was well depicted in both the acknowledgments and in the book itself. He often said that without fairness there can be no true justice. So while he was a ‘fierce smart-ass,’ he was even more thoughtful, understanding and kind,’” she wrote.

Nod to the furniture industry

Then there’s attorney Esther Mulberry. Esther is entirely made up, but she was created through elements local residents easily could recognize – and which say something about the area’s history.

On Pages 300-01, her background is given: “Esther Mulberry will tongue-in-cheek tell you that the only inheritance she received from her white furniture-dynasty daddy is her fancy last name and stubby legs.” Her father was a supervisor at his family’s chair factory, and her mother worked there.

Perhaps contrary to much of the area’s history, when the furniture heir found out his worker was pregnant, “He happily married her and moved her and their dark-skinned baby into his mansion with the bowling alley and statuary garden.

“The arrangement didn’t sit well with anyone in 1967 Southside Virginia, especially the country club crowd, who’d built their segregated Shangri-La to avoid exactly this kind of progress and paid steep dues each month to keep the coloreds in the kitchen and out of the dam swimming pool.”

Later, after “the furniture industry went bust in Henry County and all the plants closed,” Esther made it big in the professional world.

Many readers, especially in Patrick County, would recognize elements of the Melvin Harrell character.

Melvin is introduced at the start of Chapter Three: “Melvin Harrell is far and away the richest man in Patrick County, and I’d guess he’s close to being the richest person in Virginia. A mechanical genius who holds several patents, Melvin started Micrometrics in his daddy’s old Meadows of Dan auto-repair shop, and the tiny tool-and-die company grew into a multibillion-dollar international business … He’s a punishing, take-no-prisoners CEO, yet he hands out quiet checks to local families suffering through a tough patch and shows up to bus tables and wash dishes at the fire departments’ pancake fund-raisers, a hometown boy who made it big. He pilots his own Citation jet, hasn’t lost a checkers game since 2008, and, every year, teams with his high school chemistry teacher, Mr. Rigney, to win the mountaintop Rook tournament.”

Clark said of the character, “Melvin Harrell is one-half Melvin Stanley, who is a wonderful, successful person who behind-the-scenes does great things; one-quarter Mahlon Harrell; and one-quarter fiction. When people in Meadows of Dan read that, it will really register with them.”

The book also would feel familiar to regional readers with its smatterings of local last names here and there: Sutphin, Fain, Lampkin, Foley, Lambert, Burton, Hylton, Wood, Pruitt and Shelor, just to name a few.

“It’s fun for local friends … with word play,” Clark said. “Since it’s not released yet” – it’s due out Tuesday – I’ll wait for people to discover it.”

WATCH NOW: You still can participate in summer programs at the Blue Ridge Regional Library

The Summer Reading Program is on at local libraries, although most people don't seem to realize it.

WATCH NOW: Your friends and neighbors are sending their voices and perspectives worldwide through the exploding world of podcasts

Some of your friends and neighbors are being heard the world over on their personally produced podcasts.

The news came as a disappointment, but not necessarily a shock, when the Martinsville Speedway announced in May that there would not be a Cele…

'This is why I want to help:' Martinsville nurse runs to front lines of COVID-19

When Tonya Waddell, an RN dialysis nurse at Fresenius Kidney Care in Martinsville, first heard about COVID-19, she didn’t shelter in place. Sh…

The books of Patrick County author Martin Clark are set in the local area, and many of their supporting characters are real people. His main characters also usually have a pet dog, as the author does in Eudora Welty Clark, "now almost 14 and still a joy," Clark said.

You might recognized Patrick County Sheriff Dan Smith in the pages of Martin Clark's latest novel.