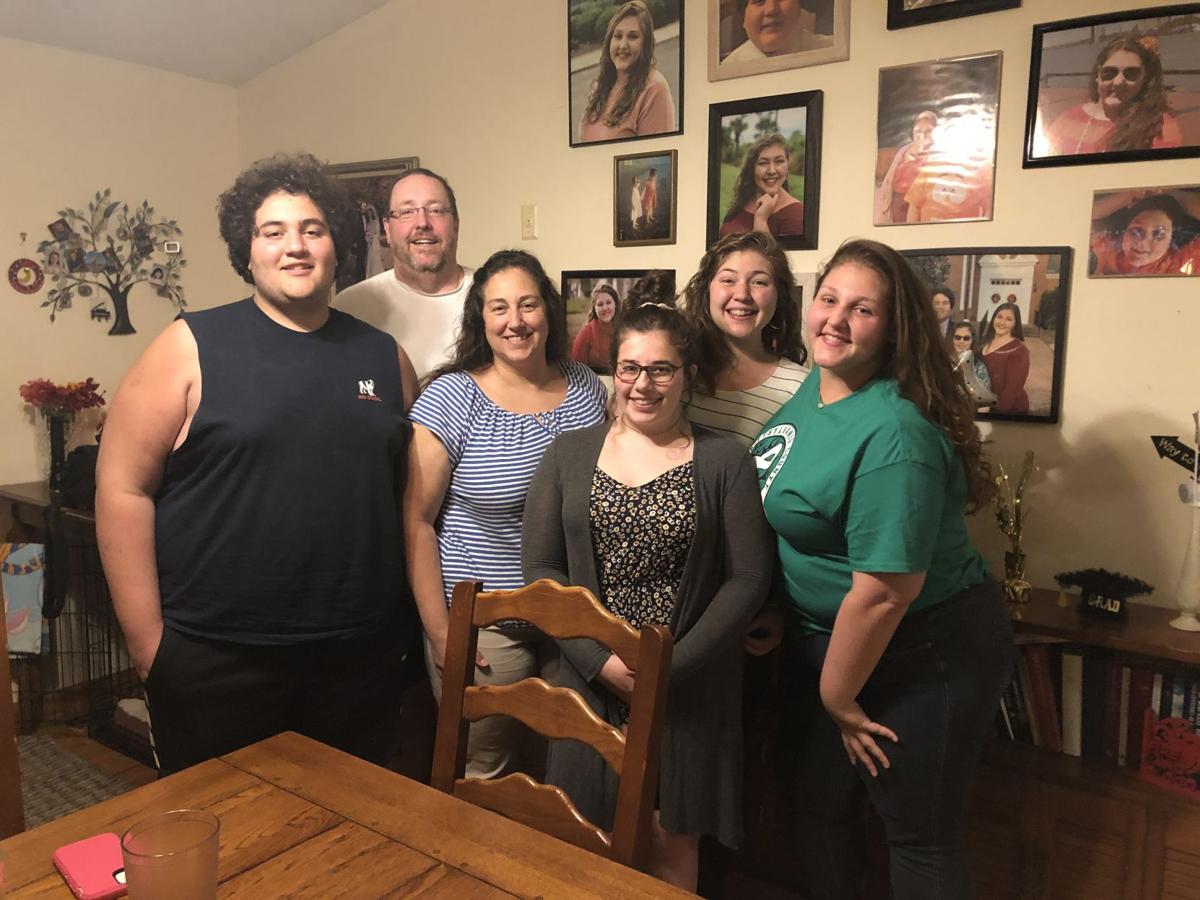 Jeff and Tracee Prillaman (second and third from left) and some of their kids will help families navigate online schooling during the  MHC Help4School event Saturday at First Baptist Church of Ridgeway. 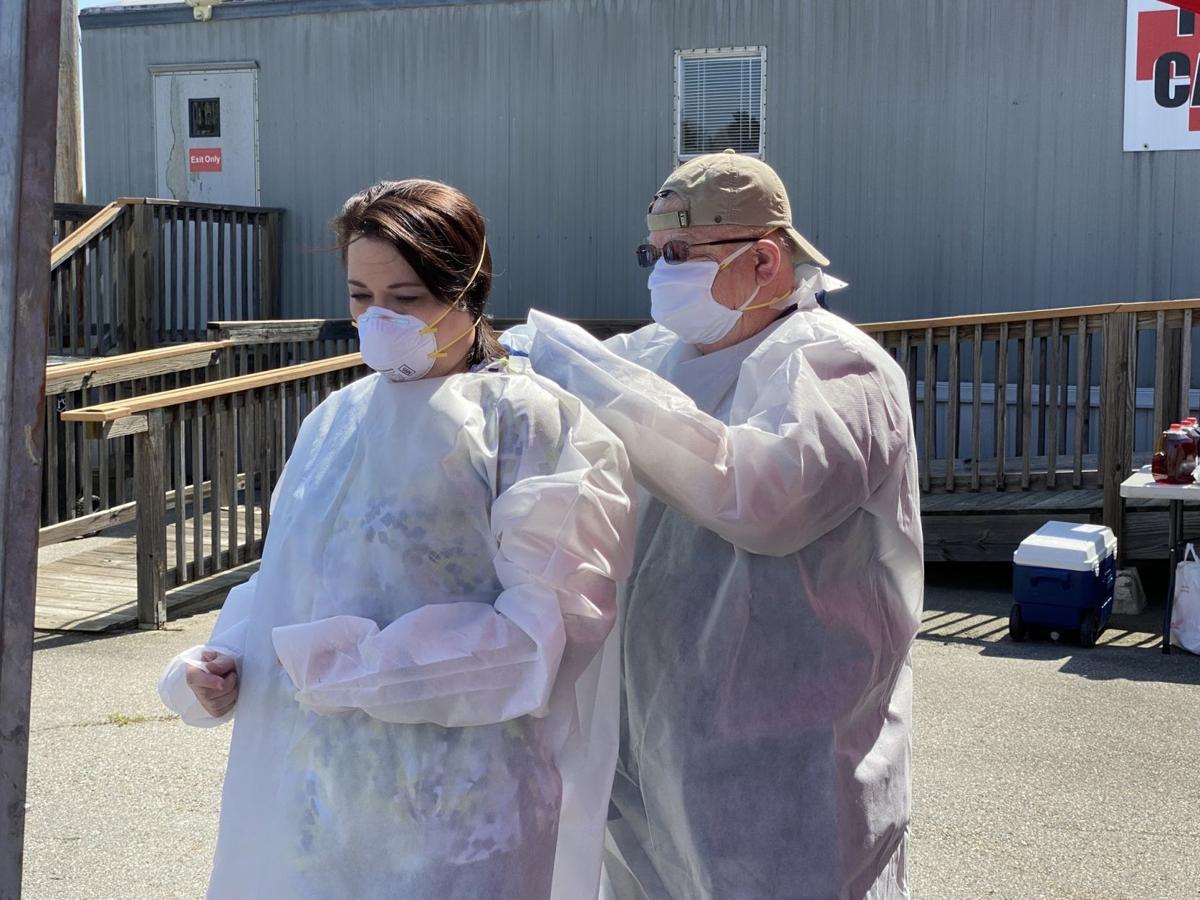 A health care worker is assisted in suiting up in protective gear for simulated COVID-19 test at Martinsville Speedway. The site has tested about 400, including the Prillaman family.

When it comes to the coronavirus, the PrillaFam stand tight with their experience of “faith over fear.”

Four of the six members of Jeff and Tracee Prillaman’s family of the Dyer’s Store community — they call themselves the “PrillaFam” — were sick and tested positive for the novel coronavirus, but they made it through just fine. Now they share their story to help others understand the varying ways this sickness affects people.

Jeff Prillaman is a solutions architect for Cisco Solutions and the music director at First Baptist Church of Ridgeway, and his wife heads the DaCapo Virginia music program.

Their children are Alyssa, who just completed her first year teaching in Pittsylvania County; Emma, a May graduate of Wake Forest University who just has started an office job but plans to continue to medical school; Josh, a rising senior at Wake Forest, with a major in engineering; and Clara, a sophomore at Magna Vista High School.

Because of the young ages of some of the family members and unkind treatment already from some people who heard the family’s story, the family only would share information as a group, without divulging which four of the six had COVID-19.

For that purpose, the pronoun “he” will be used for each of them, for convenience.

Everyone in the family is musical and is involved in various shows, performances, choirs and educational programs. Two of them went on a music-related trip to Europe in early March — and unwittingly brought home the coronavirus with them.

Before the trip, “we were very concerned about the decision” that the trip’s organizers had made to continue with plans, Jeff Prillaman said, but the wheels were in motion, and there were no refunds, so the trip was taken.

Here’s what happened to the PrillaFam afterward:

Person 1 arrived home from Europe on March 13 — Friday the 13th, wouldn’t you know? — and right away he felt exhausted for three or four days. By that Sunday and Monday he felt he had a really bad cold with fever for a day or two and congestion. Most of the rest of the family thought he had a cold. He had heard his roommate in Europe had tested positive for COVID-19 and assumed that’s what he had, but he wasn’t afraid.

Person 2 got sick that following Thursday, March 19 – with the worst case of the entire family, and it was because of him that they all decided to get tested a month later.

His fatigue was more severe than with the flu. The back ached terribly from the base of the neck down to the lower back. Lying in bed was painful. After a week, those symptoms faded, but also after a week, the senses of taste and smell were gone. They haven’t returned two months later.

Person 3 got sick on March 20, with a heavy cough. He had a significant chest cold, and he just could not get warm, no matter how many layers of clothing or blankets he had on. He was exhausted, with flu-like symptoms. His sense of taste was impacted for a few days in the middle of his sickness – his coffee tasted weird, mainly.

Person 4 got sick on March 21. He had a fever for one day and a lot of chills, weakness and dizziness — general flu symptoms, he said. There was no cough, and the throat did not hurt, but there was some nasal drip.

They all said a surprising aspect of having COVID-19 was experiencing flu-like symptoms even with a normal or close to normal body temperature in the beginning, though a low fever might develop after a day or two of those symptoms.

As soon as the first person felt ill, “we made that decision to isolate in the house,” the father said. “The only person that could leave the house” by the time they needed more provisions was one of the two who had not gotten sick.

Everyone in the family was “always sure not to be a risk to anybody in the community,” Tracee Prillaman said. They all stayed quarantined and kept to themselves.

The family said that at the time they were sick, because of the scarcity of tests, the protocol was that tests were not given unless a fever was higher than 100.4, and they were advised to go to the hospital only if fever was above 101 degrees for more than one day or there was severe trouble breathing.

None of that happened to any of them, so they did not get tested while they were sick.

Off to the Speedway

Because Person 2 was so sick, though, and the sense of taste still was impacted a month later, the family decided he should get tested. He tested at the end of April and got the answer the next day that he tested positive, so the rest of the family got tested as well.

They were tested at the Martinsville Speedway site.

It’s a scary process laden with procedure, they said. Jeff Prillaman said he had to show his driver’s license for identification when he registered and again just before being tested.

By the way everyone approaches you in full hazmat gear, “you would swear you would kill anyone you touch, like a scene out of a movie,” he said.

The test involves a nasal swab stuck way up the nose. “They actually sort of spin it around,” Jeff Prillaman said. It is “very uncomfortable. It is not painful, but it is not trivial.”

Said Emma Prillaman: “It’s less than 5 or 6 seconds per nostril. It’s not comfortable, but it’s not as bad as people make it out to be.”

In sharing their story, Jeff Prillaman said, “My goal is, we’ve got to do something besides scare the bejesus out of everybody. It’s not the first plague that’s going to hit the planet, and it’s not going to be the last.”

The fear of the coronavirus is keeping people isolated and lonely, he said, which will have bad long-term repercussions. The term “social distancing” was a poor choice – it should be “physically distant,” and people should still feel “socially connected,” he said.

“Life’s built on relationships. When you can’t be in a relationship with people, it’s really, really difficult,” his wife said.

“People are terrified” of COVID-19, Jeff Prillaman said, but “people that you know can have coronavirus and not be dead and they recover.”

A surprise discovery brought a widow new insight into her husband's war service.

Hope Barker of Sovah-Martinsville was honored recently with The DAISY Award For Extraordinary Nurses. The not-for-profit DAISY Foundation, bas…

Jeff and Tracee Prillaman (second and third from left) and some of their kids will help families navigate online schooling during the  MHC Help4School event Saturday at First Baptist Church of Ridgeway.

A health care worker is assisted in suiting up in protective gear for simulated COVID-19 test at Martinsville Speedway. The site has tested about 400, including the Prillaman family.