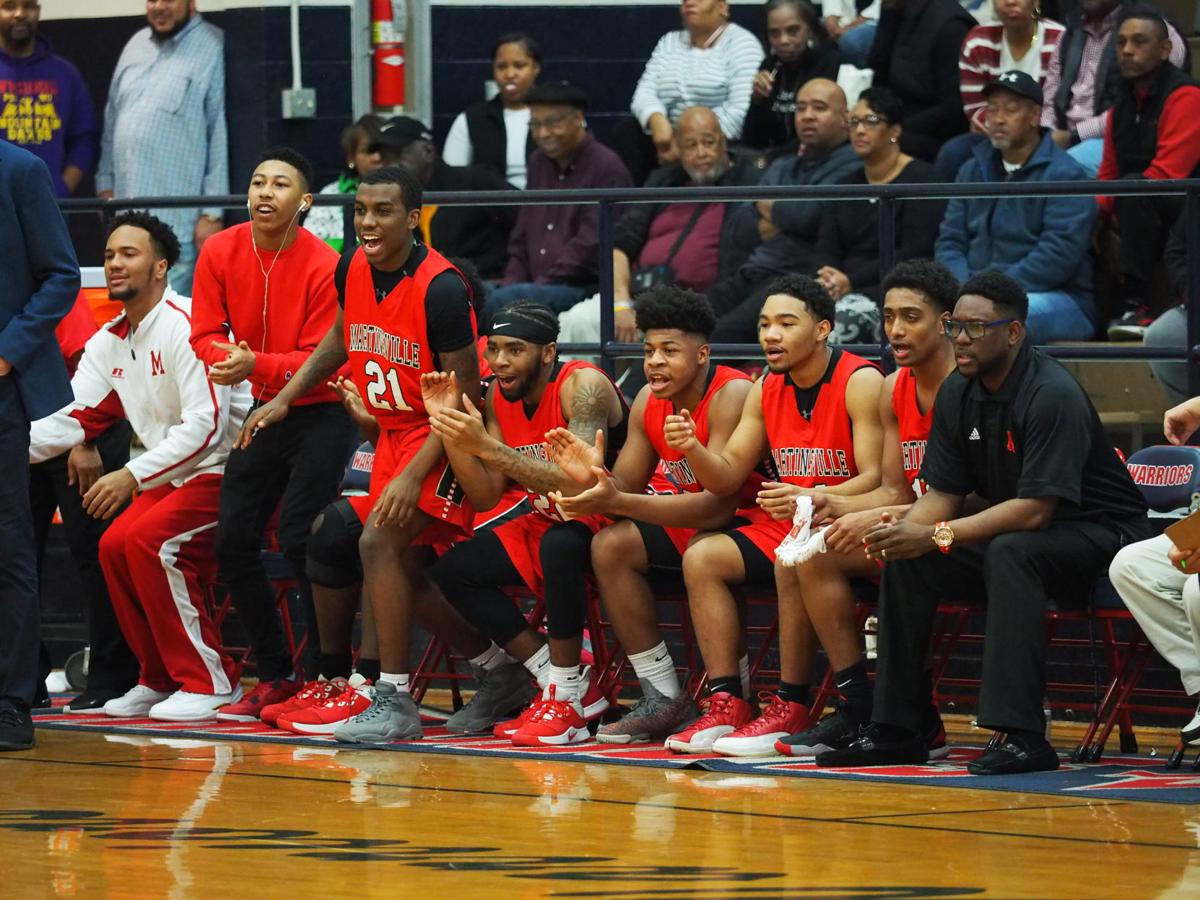 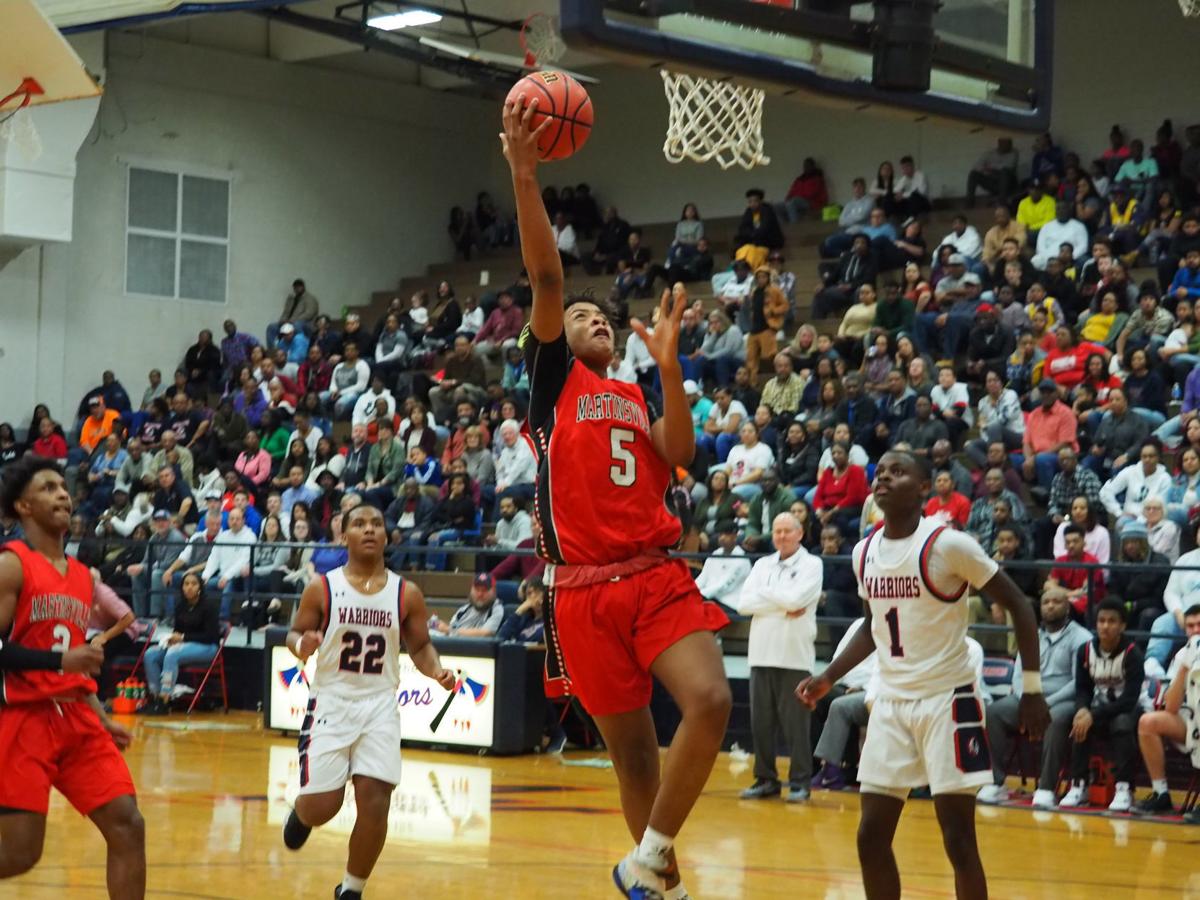 Martinsville's Lemuel Jones goes up for a layup during Saturday's game at Magna Vista.

Martinsville had the best possible start to a game they could imagine Saturday at Magna Vista.

The Bulldogs opened their scoring on three 3-pointers, and held the Warriors scoreless for more than six minute with just one make from the field in the first quarter.

Martinsville rolled from there on the way to a 68-41 win in Ridgeway.

Four Bulldogs in all reached double-digit scoring on the afternoon. Junior Jahiem Niblett and senior Troy Brandon, the team’s two leading scorers this season, each had a game-high 17 points. Niblett added 13 rebounds, and Brandon had five.

Lemuel Jones and Jahil Martin added 10 points each for Martinsville.

“They’ve got a very good 2-headed monster,” Magna Vista coach Patrick Mills said of Niblett and Brandon. “I said in the preseason those two were in my opinion the best 1-2 punch in the Piedmont and I still stand by that. So when you get three other guys that buy into their role on the floor they’re a pretty good team and I think we caught them when they’re playing their best.”

Martinsville absolutely dominated Magna Vista on the board, outrebounding the Warriors 47-20. The Bulldogs had 17 offensive rebounds. Jones and Martin had seven rebounds each.

“They were missing their point guard and we put pressure on them and I think our athleticism was a big part of the night,” said Martinsville coach Jeff Adkins.

“Early in the game we got the shots I wanted and they were scoring but we probably had 10 shots in the paint in the first quarter that we usually make and there was just a lid on it, even on free throws,” Mills said. “You dig an 18 or 20 point hole and then we started scoring a little bit but... you can’t trade buckets when you’re down double digits.”

The big lead allowed Martinsville the chance to give their bench players extra minutes, which Adkins said he likes being able to do, especially this late in the season. Guard Darius Beal had five points off the bench in the fourth quarter, including a 3-pointer.

“I love it. I love my reserves. They go in and they’ve just got a big smile on their face,” Adkins said. “We’ve got a great bench. They’re always supportive. They don’t play a lot but they never complain and when they get a minute they go after it. My starters cheer for them more than anybody in the stands. It was pleasing to see Darius hit a 3-pointer. They bring so much in practice so it was big they got in and got a few buckets.”

Adkins says his goal every year is to peak at the right time, and there’s no question Martinsville is playing its best basketball of the year. The Bulldogs are on a nine game winning streak after starting the year 4-4.

“No question… we’re playing better but we’ve still got room for improvement,” Adkins said. “We’re just going to continue to get better. We’re playing at a high level but we can get better… We’ve been putting in a lot more practice on our defense. I like our offense. We’re turning the ball over less and we’re playing the best we’ve played all year.”

Magna Vista was again without starting point guard Courdae Gravely, who suffered a knee injury four games ago against Tunstall.

Mills said, while his team is down, the biggest thing is not getting their heads down this late in the season.

“A lot of it is mental,” he said. “We’ve got to believe. There’s got to be some hope. If we don’t believe then why are we out here? It’s an honor to put that uniform on and we owe it to the people who aren’t able to play right now to compete and hopefully get those guys back and still be at a stage where we can be in the postseason and have our best possible look. We can’t sit around and feel sorry for ourselves first off. We’ve got to put this one behind us. I tell them, ‘The 24 hour rule.’ We can pout about it until midnight, then tomorrow is a new day.”

CORRECTION: Previous versions of this story inaccurately reported the final score was 63-25. The Bulletin regrets this error.

Martinsville's Lemuel Jones goes up for a layup during Saturday's game at Magna Vista.