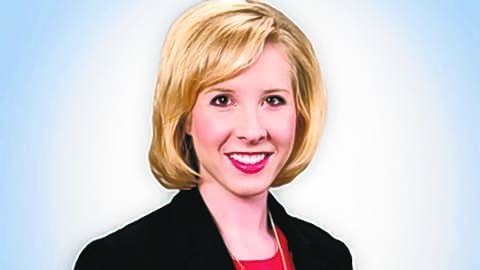 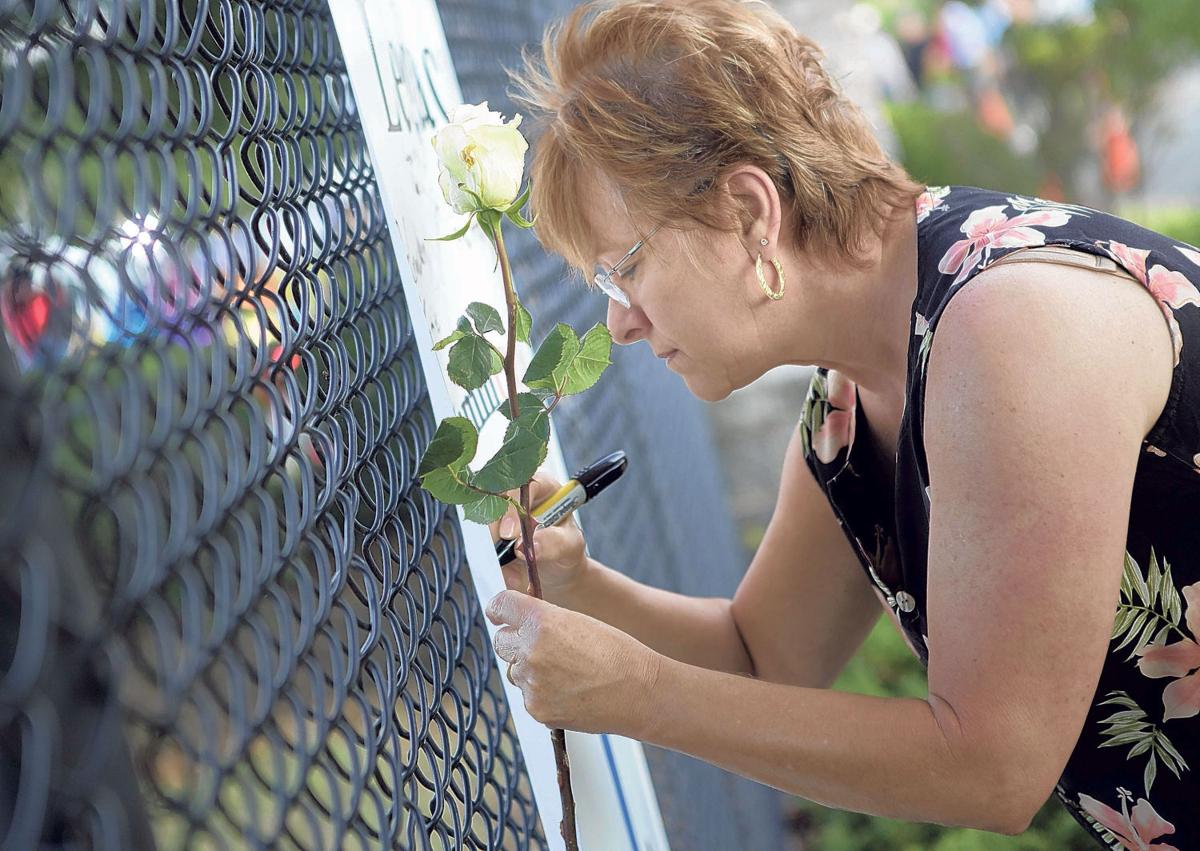 Brenda Harth of Salem signs a banner tied to fencing that borders the broadcast center. The banner later was given to staff at WDBJ.

Shock and sadness spread quickly Wednesday among friends of family of television news reporter and Martinsville native Alison Parker, who was shot and killed along with a colleague during a live broadcast.

They were conducting a live interview at about 6:45 a.m. at Bridgewater Plaza near Moneta on Smith Mountain Lake.

The interview subject, Vicki Gardner, who heads the Smith Mountain Lake Chamber of Commerce, also was injured in the shooting and reportedly is in stable condition.

Parker was the daughter of Barbara Parker, director of programs at Piedmont Arts, and Andy Parker, a consultant and former Reed Creek District representative on the Henry County Board of Supervisors. She was the sister of Andrew Parker.

"Barbara, Drew, and I are numb, devastated and I find my grief unbearable," Andy Parker said in a statement to the Bulletin. "Alison was our bright, shining light and it was cruelly extinguished by yet another crazy person with a gun. She excelled at everything she did and was loved by everyone she touched. She loved us dearly, and we talked to her every single day. Not hearing her voice again crushes my soul. Our family can only take solace in the fact that although her life was brief, she was so happy with it. She lived it to the fullest and her spirit will always be with us."

Kris Landrum, public relations and marketing manager for Patrick Henry Community College (PHCC), said that Parker had been a dual enrollment student at PHCC and Martinsville High School. She recalled that Parker was selected as a PHCC Distinguished Alumna last year.

"The criteria for those nominations are that PHCC alumni have gone on to distinguish themselves in their career and in their personal lives," Landrum said. "PHCC saw Alison as a bright and shining star. We were very proud of her and her accomplishments. I believe she had a very bright future ahead of her. Our hearts are breaking."

Martinsville High School issued a statement Wednesday stating that "we are deeply saddened to hear of the passing of Alison Parker. She was a 2009 graduate of Martinsville High School where she was active in a wide variety of school clubs and organizations and a beloved member of the student body. She will be remembered for her bright smile and bubbly personality. Our thoughts and prayers are with her family and friends at this time."

On Twitter, Martinsville City Public Schools Superintendent Pam Heath added that "our hearts are heavy over the loss of one of our own, Allison Parker, MHS Class of ‘09. Words can’t express our sorrow."

According to previous Bulletin reports, Parker received the Big M academic achievement trophy, awarded by the city school system to seniors with a cumulative grade-point average of 3.7 or higher. She participated in the National Honor Society, Key Club, robotics and the concert and jazz bands.

Sarah Byrd, communications and community outreach coordinator for the city schools, said that she first knew Parker as a teacher at Martinsville Middle School.

"I saw her every afternoon because I had bus duty at the corner," Byrd said. "Alison would walk to Piedmont Arts. She always had a huge backpack, a lunch bag and a saxophone. She was always smiling, always happy. She was very involved in school activities. She had lots of friends both in and out of school."

"She was so enthusiastic," Byrd added. "Just a very positive person."

Parker was a December 2012 graduate of James Madison University in Harrisonburg, where she studied in JMU’s School of Media Arts and Design. She was the news editor for The Breeze, JMU’s nationally acclaimed newspaper, according to Bulletin reports.

During her last semester in school, she learned how to produce newscasts at WHSV, an ABC/Fox affiliate station in Harrisonburg, WDBJ’s website stated.

The morning reporter for WDBJ, Parker also had been an intern for the station, WDBJ reported. She previously worked at WCTI NewsChannel 12 in its Jacksonville, N.C., bureau, near Marine Corps Base Camp Lejeune.

WDBJ anchor/reporter Chris Hurst posted on Twitter that he and Alison Parker were in a relationship. He added: "She was the most radiant woman I ever met. And for some reason she loved me back. She loved her family, her parents and her brother."

Hurst also tweeted that "I am comforted by everyone at @WDBJ7. We are a family. She worked with Adam (Ward) every day. They were a team. I am heartbroken for his fiancee."

Piedmont Arts released a statement Wednesday morning saying that members of the organization were "shocked and saddened" to learn of Alison Parker’s death.

"Barbara has been with Piedmont Arts for over 18 years and Alison grew up coming to the museum," Piedmont Arts Executive Director Kathy Rogers said in the statement. "Alison was a smart, talented and beautiful woman and we are proud to call her part of the Piedmont Arts family. All of us here at Piedmont Arts are devastated. Our hearts and prayers are with Barbara, her husband Andy and son Drew."

Piedmont Arts was closed Wednesday out of respect for the Parker family.

Henry County Board of Supervisors Chairman H.G. Vaughn said Wednesday that he had worked with Andy Parker for four years on the board and also had worked with Barbara Parker, and he urged area residents to keep the Parker family in their prayers.

"I know that Andy and his family were very close-knit," said Vaughn, who represents the Ridgeway District. "They did a lot of family activities together. I know they have to be devastated. I hope we can remember them in our prayers and ask for strength for them to make it through this. It’s horrible, senseless. You can’t understand how and why something like this happens. It’s hard to imagine what Andy and Barbara and their family are going through at this time."

"There are no words to express how heartbroken I am by the senseless tragedy in Moneta this morning," Sen. Tim Kaine said in a statement. "My deepest sympathies go out to the loved ones of Alison Parker and Adam Ward, as well as the entire WDBJ family. I ask everyone to join me in praying for Vicki Gardner who was seriously injured in this attack and all of the local authorities and first responders" who were looking for the perpetrator.

"We appreciate the work of local, state and federal law enforcement in identifying and locating the suspect in today’s shootings, and taking him into custody," Sen. Mark Warner said in a statement. "This crime was senseless, and our thoughts are with the loved ones and friends of Alison, Adam and the whole WDBJ staff. We’re also praying for the recovery of Vicki Gardner."

"Like all Southwest Virginians, I am heartbroken by the tragic killing of Alison Parker and Adam Ward," Ninth District Rep. Morgan Griffith (R-Salem) said in a statement Wednesday. "Now and in the days to come, Alison and Adam will be in my prayers, as will their families and loved ones, the WDBJ family, and our community as a whole."

Griffith added that he also is praying for Gardner’s recovery.

"At times, we can forget that journalists and others in the public eye may find themselves at risk," Griffith continued. "Alison and Adam were not reporting from the scene of a crime or a potentially violent location this morning when this horrible event took place. Instead, they were at one of our region’s popular recreational areas. I am deeply grateful for the important work undertaken by journalists regardless of this risk, and appreciate the efforts of law enforcement and first responders to keep them, others, and our communities safe from harm."

All but 1 year of his 20-year sentence was suspended.

Clearview Early Learning Center teacher is surprised by the use of a new car.

The person was not identified by the FAA.

Couple relocates from Texas and opens The Ground Floor.

Brenda Harth of Salem signs a banner tied to fencing that borders the broadcast center. The banner later was given to staff at WDBJ.