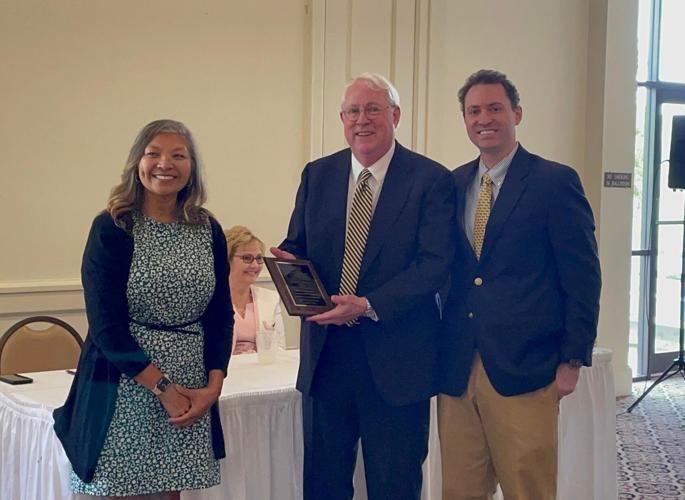 Chamber President Lisa Watkins, from left, presents the Small Business of the Year in Manufacturing/Distribution to Duke Ferrell and his son, Carter Ferrell. 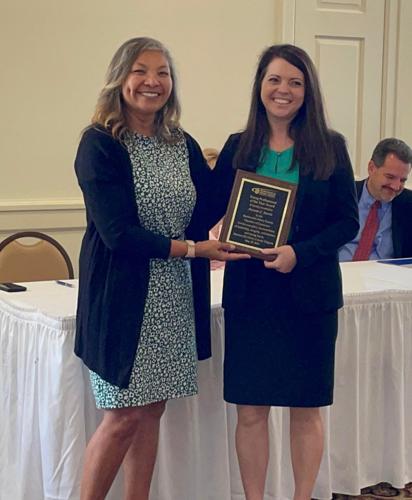 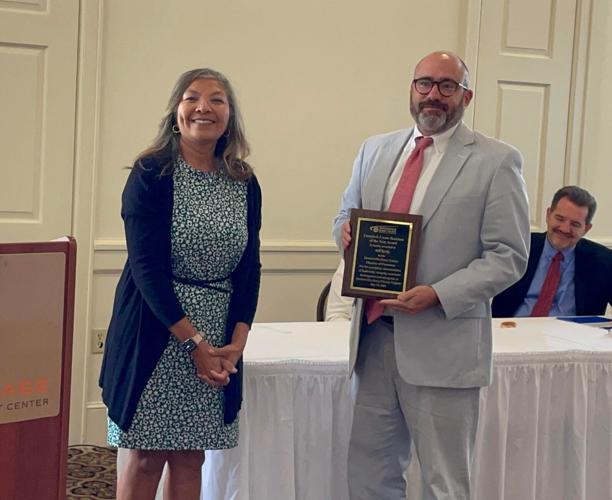 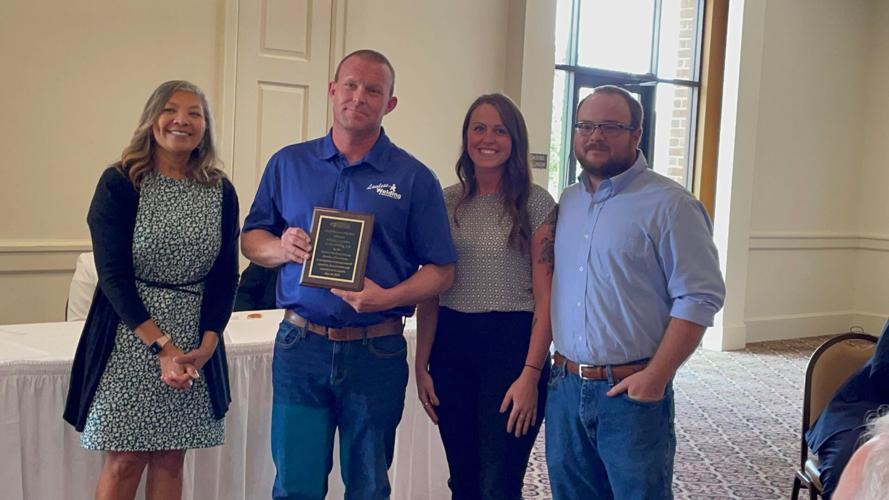 Chamber President Lisa Watkins (from left) presents the Small Business of the Year Award in Service to Lawless Welding & Fabrications Inc. Jordan Mitchell, Taylor Vance and Justin Ingram accepted the award on behalf of Chris Lawless, who is in Colorado for instructor training. 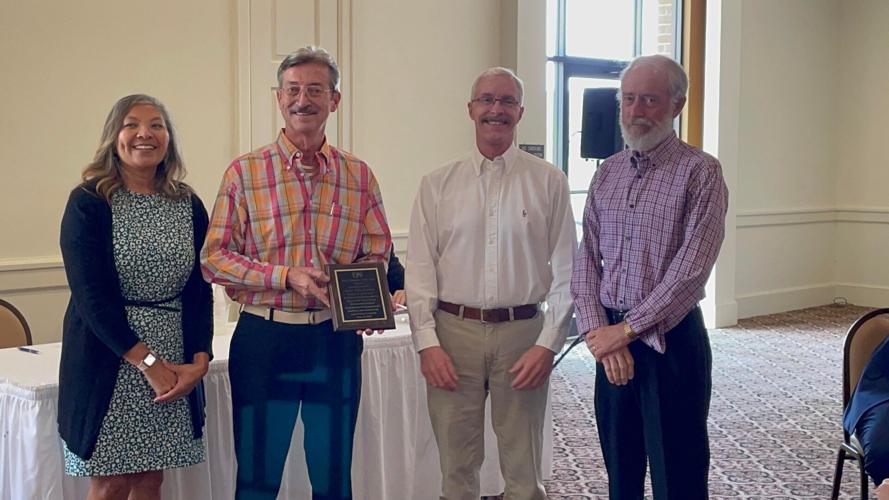 ActivWall Systems LLC, owned by Duke Ferrell and his son, Carter Ferrell, won Small Business of the Year in Manufacturing/Distribution.

John Compton of Compton’s Machining LLC had stated when he nominated ActivWall that the success in their business allowed his own business, as well as others in the area, to grow, Watkins said. “This father and son care about employee well-being and the community,”she said. “Employees are encouraged to serve and are granted time to attend meetings and volunteer during the workday. “

The Small Business of the Year Award in Service went to Lawless Welding & Fabrications Inc.

Company founder Chris Lawless is a graduate of the Chamber’s Startup and Grow MHC programs. He also helped the program by welding a bench which he raffled off; proceeds were donated to the programs. The company also works with Boy Scouts and agriculture students at Bassett High School.

Small Business of the Year Uptown went to merchant and property owner Martin Plaza Furniture Outlets and The Showroom, founded 35 years ago by the late Fred Martin. The company now is run by his son, Tim Martin, “who can be seen daily in uptown checking on tenants, discussing building improvements or how to enhance the uptown area when something is needed in uptown,” Watkins said.

The Young Professional of the Year award went to Autumn Morris, an Edward Jones financial advisor. She also has worked at New College Institute and the Chamber of Commerce. Morris is a Charity League sustainer and is on the board of directors of the Survivor Response Center, Spencer-Penn Centre and the M-HC Coalition for Health and Wellness. She also is a member of Horsepasture Christian Church.

The Campbell-Lester Business Person of the Year Award, named for Clay Campbell and George Lester II, went to Bill Kirby, the Market President of the Southside Region of American National Bank & Trust. Kirby is a graduate of Martinsville High School, Emory & Henry College and Drake University School of Law. He serves on the board of the Chamber of Commerce, SafetyNet, Smith River Sports Complex and Harvest Foundation.

The luncheon’s keynote speaker was Terry Young, Patrick & Henry Community College (P&HCC) Interim Vice President of Academic & Student Success Services and a professor of history and political science. He talked about how P&HCC creates and runs educational programs to meet the needs of local employers, the community and students.

“We remember a time period when Henry County was known as the sweatshirt capital of the world, the furniture capital … jobs were plentiful. Folks always had jobs,” he said.

After the closings of the factories, the community had to reinvent itself, and P&HCC’s programs meet those needs, he said.

During the pandemic, the Chamber assisted 251 businesses in getting $4.7 million in loans and grants to help their businesses survive the pandemic shutdown, Watkins said.

Two occupants of a school bus were injured Friday morning when an SUV crashed into a Henry County school bus, and the driver and passenger of …

Made In Martinsville, a new and unique store in uptown, opened its doors on Aug. 25 this year and features a variety of local items for sale made by creative and talented people who live in the area.

A Henry County Grand Jury indicted an Axton man on charges of first-degree murder and use of a firearm in the commission of a felony.

A truck driver died in a fiery NC wreck on I-85. Now, a Virginia mother is missing.

A Virginia mother of two is missing, and her family said Friday they think she might have died in a fiery wreck on Interstate 85.

Martinsville school board lawyers up

The City says that if Martinsville reverts from a city to a town, the Martinsville school system would cease to exist — but the School Board d…

Whoever has the winning ticket has 180 days from the drawing date to claim the prize.

Was it bumping or bullying?

That's the question around an interaction between Delegates Marie March, R-Floyd, and Wren Williams, R-Patrick County, at a Republican fundraiser Saturday in Wytheville.

The Virginia State Police (VSP) have identified the person who died in a place crash that took off from the Blue Ridge Airport in Spencer.

Nigeria flooding: Highest waters in a decade kills over 300 people

Nigeria flooding: Highest waters in a decade kills over 300 people

Chamber President Lisa Watkins, from left, presents the Small Business of the Year in Manufacturing/Distribution to Duke Ferrell and his son, Carter Ferrell.

Chamber President Lisa Watkins (from left) presents the Small Business of the Year Award in Service to Lawless Welding & Fabrications Inc. Jordan Mitchell, Taylor Vance and Justin Ingram accepted the award on behalf of Chris Lawless, who is in Colorado for instructor training.