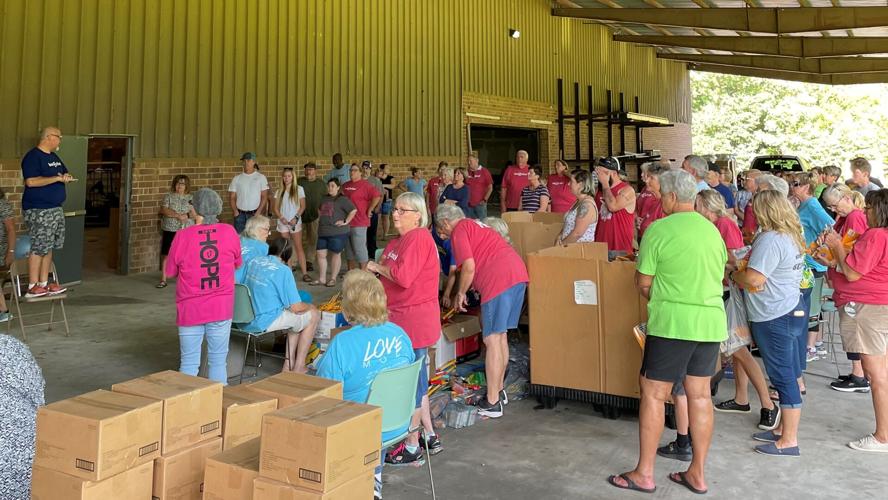 The Community Fellowship Pastor Michael Harrison, far left, on chair, spoke to the crowd of church volunteers to prepare them for packing the school supplies. 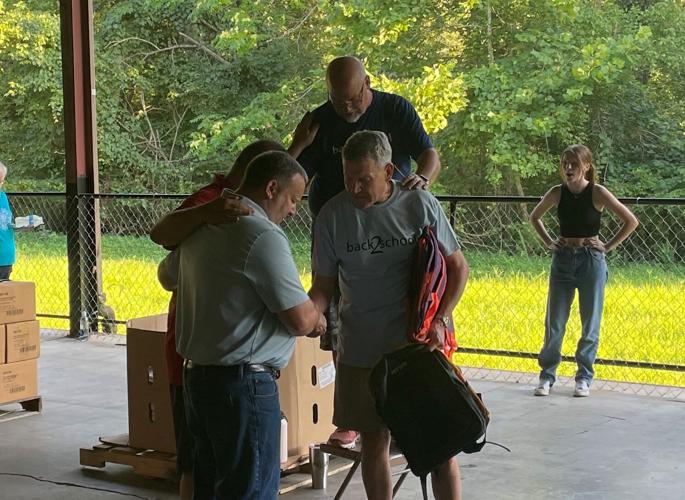 The Community Fellowship Pastor Michael Harrison, standing on chair, and Tim Byrd, right with backpack, prayed over the school bags. 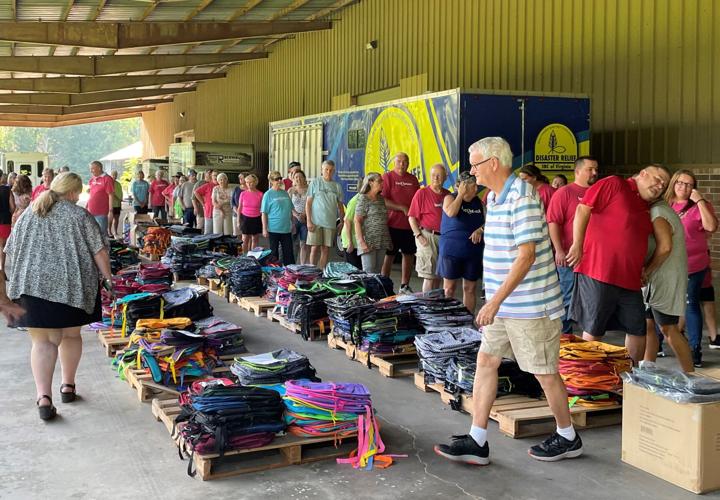 The volunteers lined up assembly-line style to pack the back packs for the children.

Back2School held its school supply packing event on Tuesday evening at The Community Fellowship’s building at 700 Commerce Court in Martinsville.

This area’s largest back-to-school program held its registrations in July, and Tuesday more than 75 volunteers from participating churches gathered together as one group to fill backpacks with school supplies.

The set-up was assembly-line style, with stacks of backpacks at the beginning, big pallets of the different school supplies and then the area where trucks from the distributing churches pulled in to receive their backpacks. Some volunteers were stationed at the supplies boxes to pass out supplies, while the majority of volunteers waited in line with their backpacks to be filled. Once they reached the end with fully stocked backpacks, they looped around back to the beginning to start the process over.

The different supplies that the backpacks were filled with were determined by age group. One side of the line was for elementary-aged students and then the group was asked to switch to the other side of the line when it was time to fill bags for middle- and high-school-aged students. The packers filled bags with items such as notebooks, pencils, pens, highlighters, glue sticks, crayons and Bibles.

Once an order for a church was filled, The Community Fellowship Pastor Michael Harrison stopped everyone in the place and called a local pastor to pray over the children who would be receiving those school supplies.

Since the program’s beginning in 2007, it has grown significantly—serving over 32,000 children in total. The program has also spread outside of the Martinsville-Henry County area to churches in South Carolina, Louisiana and Kentucky.

Tim Byrd of McCabe Memorial Baptist Church said that his church has been supporting the Back2School program financially for seven or eight years, but this year they “jumped in” physically and brought around a dozen volunteers to help pack bags.

Byrd said that this event, with the area churches’ seeing a need and making efforts to fill the need, is “mirroring the path” of Jesus. He added that often times when churches come out to events that will bless peoples’ lives, they themselves end up being blessed in the process.

Craig Guy came all the way from Wellford Baptist Church in South Carolina for their fourth year participating in the program. The church used to have a missions trip to Nicaragua, but when that became impossible four years ago, the pastor of the church connected them to Back2School, he said.

Guy said that they started out participating through helping set up and pack bags, but have transitioned into having the registration and big day event at their church in Wellford. This year they registered 410 kids at their church and brought some members to help out as volunteers as well.

Stevie Byrd of Abundant Life Fellowship Church in Collinsville said he has been volunteering at these events for six or seven years. Since Abundant Life is near The Community Fellowship, he said, it didn’t make sense to have to locations so close to each other both be registration sites, so Abundant Life supports the program in other ways.

He said that the importance of the program is to “provide relief” for parents and families and also “building self-esteem” for the children who can come get a haircut, new clothes and their school supplies. However, he added, what makes this event stand out is the message of the Gospel that they are able to share with the families at the big event where supplies are passed out.

Tracy Hinchcliff came as a part of the Martinsville city cluster of churches that worked together as one unit for this program. The cluster is made up of 10 churches in the city, and registration was done at the Martinsville Uptown Ministry Center, which is run by First United Methodist Church.

“I’m really excited to be a part of it,” Hinchcliff said. She has been participating for seven years and said that the event is important because it provides aid for children who may not be as “loved and nurtured” as other children for many different reasons. “They need to know that they are important,” she added.

First Baptist Church of Ridgeway Pastor Lewis Harris said that his church has been participating as long as the program has existed and that he has been involved for five years personally. The importance of the event is “showing people that other people love them,” he said.

The distribution events, where all the supplies and other items will be passed out to the children, will be this Saturday, at scheduled appointment times.

Monique Holland is a reporter for the Martinsville Bulletin. She can be reached at monique.holland@martinsvillebulletin.com or at 276-734-9603.

Must see! Last supermoon of the year filmed in the skies over Wales

The Community Fellowship Pastor Michael Harrison, far left, on chair, spoke to the crowd of church volunteers to prepare them for packing the school supplies.

The Community Fellowship Pastor Michael Harrison, standing on chair, and Tim Byrd, right with backpack, prayed over the school bags.

The volunteers lined up assembly-line style to pack the back packs for the children.