Bob Crouch, former Henry County Clerk of Circuit Court and U.S. Attorney for the Western District of Virginia, dead at 73
3 comments
Share this
{{featured_button_text}}
1 of 4 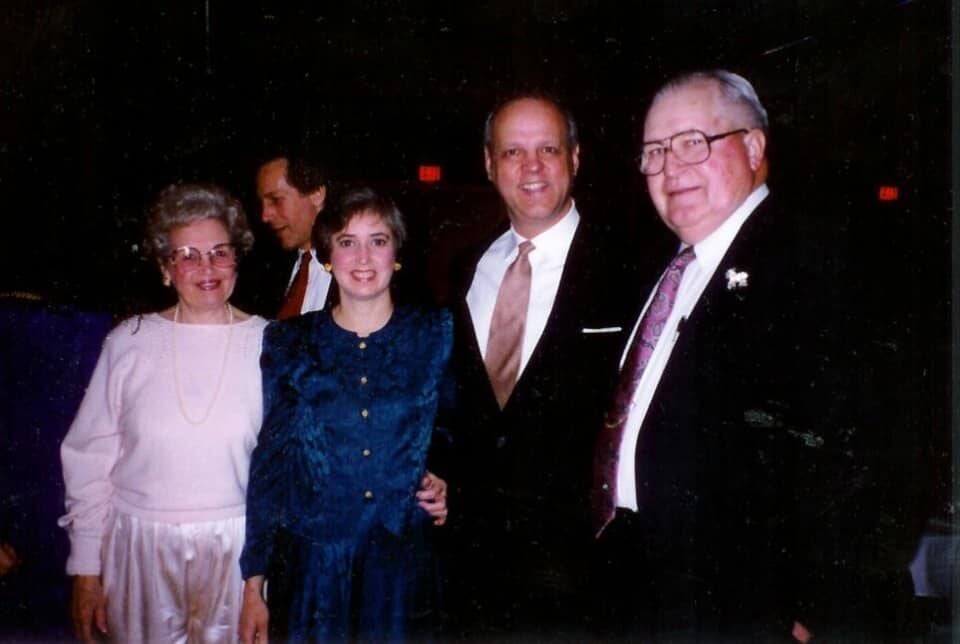 Bob Crouch (second from right) continued his Martinsville and Henry County friendships throughout the years after he left this area. He and his wife, Clara, are pictured with Jewell Jamison (left) and Pete Jamison (right). 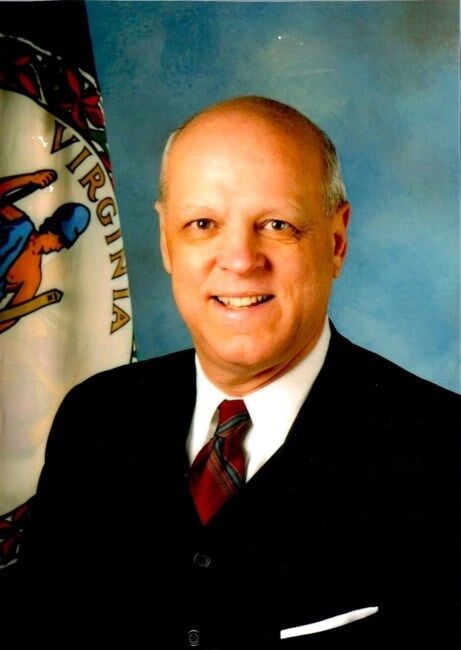 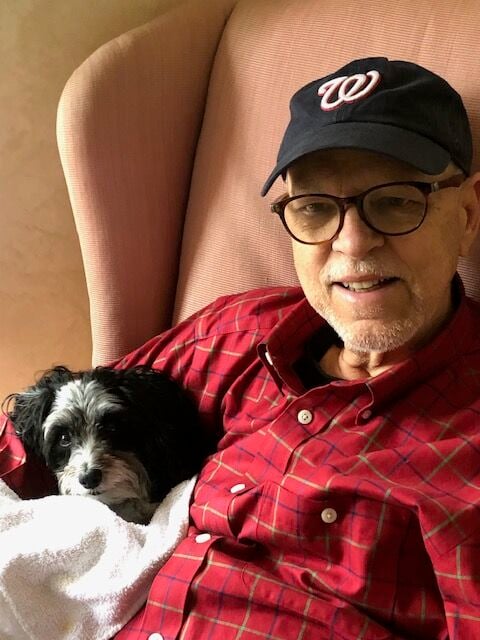 Bob Crouch sits with his dog, Nattie, in September. 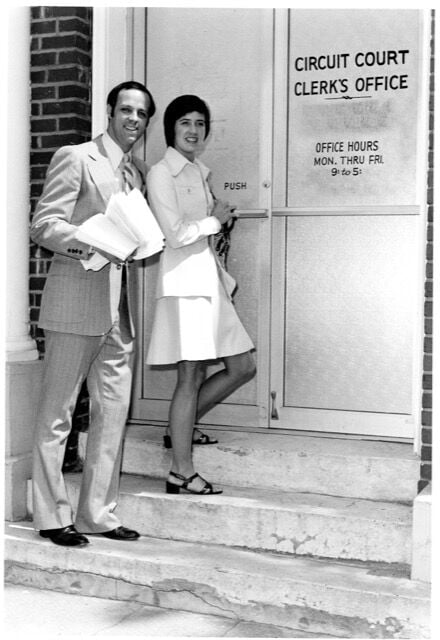 Bob Crouch (with his wife, Clara) was Clerk of Henry County Circuit Court from 1975 to 1984. Then he entered law school, worked for a Martinsville firm and went on to become U.S. Attorney for Western Virginia.

Robert “Bob” Crouch, a 1966 Drewry Mason High School graduate who held one of the most powerful law enforcement jobs in Virginia, is being remembered as dedicated to service and the legal process.

Crouch, who most recently lived in Mechanicsville, was a U.S. attorney for the Western District of Virginia in the early 1990s and then had roles in state government. He died Wednesday at the age of 73.

His paternal grandmother was from Patrick Springs, but he grew up living in different places, including France and Hawaii, because “his father was career Army. He lived literally all over,” said his widow, Clara Crouch.

For the rest of his life Bob Crouch maintained his “many lasting friendships from that [Southside] area” from his younger days, she said.

Apart from the years he served as U.S. attorney, a nonpolitical role, he was a heavy-hitter for the Democratic Party — and with a young start.

Crouch was in sixth grade in Tacoma, Washington, when he promoted John F. Kennedy in his school’s mock presidential elections. His side won by a landslide.

As a junior at Drewry Mason High School, he worked on the Johnson-Humphrey campaign and organized a local young Democratic support group for the ticket.

“He was always real smart and not very athletic, and he was always into politics even back then,” said Drewry Mason classmate Steve Kendrick, who said he filled out Crouch’s tax returns “for probably 30 or 40 years” as a CPA for Ford, Hogg and Cobbe.

“He had a sort of dry personality, but he was fun to be around,” Kendrick said. “He wasn’t stoic type. He was a real good guy.”

Crouch studied at Patrick Henry Community College in 1967. And while he was a student at the University of Maryland, from which he was graduated in 1971, he worked part-time on Capitol Hill and for the Democratic National Committee.

In 1972, Crouch became an aide to then-Sen. Bill Spong, who was running for re-election. “That was a great education regarding Virginia,” Crouch told the Bulletin in 1993, because in that role he toured every Virginia county but one.

It also was when he met his wife, Clara, romantic movie-style. They were in the Capitol building, she said, when he was working for Spong and she was working for Sen. Howard Baker (R-Tenn.). He spotted her in an elevator, and “later in the day called one of the Baker staffers and said, ‘Who is this new girl?’ We started dating right after that,” she said.

Right before the couple got engaged, he moved back to the Martinsville area, she said.

After college he worked for Fieldcrest Mills in Eden, N.C., and PHCC before winning the elected post of clerk of Henry County Circuit Court in 1975. He instituted innovations such as a call-in hotline for jurors and in-house computer indexing.

“Bob was a hard worker, obviously,” Martinsville attorney Roscoe Reynolds said. “He was an outstanding clerk while he was serving as clerk of the circuit court. I kind of got the impression his interactions with the lawyers and what took place in the courtroom was something he wanted to do.”

By 1976, Crouch was helping organize fundraisers for Democratic candidates. He would become the state party vice chairman for operations.

He earned his master’s degree from the University of North Carolina at Greensboro in 1982.

A year after he was elected to his second 8-year term as clerk of court, Crouch left the post for law school at the University of Virginia. After getting his law degree in 1988, he worked for a firm in Charlottesville before joining Young, Haskins, Manns & Gregory in Martinsville.

“He was always extremely polite and patient, and the clients really felt that he had a genuine interest in whatever their legal problem was that they came to see him about,” Jim Haskins said.

Crouch had high credibility “with not only his clients and fellow attorneys but also with the judges, also with the courts,” Haskins said. “The way he practiced was always with the highest order” of professionalism and integrity.

Couch was elected vice-chair of operations for the Virginia Democratic Party in 1989.

In 1991 he campaigned unsuccessfully against Ward Armstrong to fill the House of Delegates seat long held by the late A.L. Philpott.

“We may have been competitors, but we were on the same team and believed in a lot of the same things for this area and the commonwealth of Virginia,” Armstrong said. “I don’t know of any more dedicated public servant than Bob Crouch.

“He and I still hold the record for turnout in a firehouse primary: 6,500 people came out on a Saturday. I prevailed by 200 votes. It was very close.”

A firehouse primary is one held by the political party rather than by an electoral board, in this case because of the death of Philpott outside the normal primaries cycle.

Crouch was the Henry County chair of Jimmy Carter’s presidential campaigns, and one of the first Virginia Democratic activists to join Bill Clinton’s campaign. He was Clinton’s campaign coordinator for the Fifth Congressional District, and went onto become a Clinton delegate and whip at the Democratic National Convention.

At the age of 45, in 1993, he was recommended by then-Sen. Chuck Robb to serve as US attorney for the Western District of Virginia, which was based in Roanoke. Later that year, Clinton appointed him to that position, where he directed 17 assistant US attorneys.

Although US attorneys traditionally leave partisan politics when they serve their terms, their appointments usually are political rewards for their party.

The U.S. Attorney’s Office represents the federal government in criminal and civil matters and prosecutes violations of federal law. It covers about 60% of the state’s geography, including Henry County, Martinsville and Patrick County.

In 2000, Crouch was replaced as US Attorney for the Western District of Virginia by the Bush administration. In 2001, he was appointed deputy secretary of public safety by then-Gov. Mark Warner.

He also was an assistant to the governor for commonwealth preparedness under then-Gov. Tim Kaine. Afterward, he remained near Richmond as a government consultant.

Crouch’s many state-level roles in organizations included vice chair of the State Board for Community Colleges, on the board of the Virginia YMCA and on the George Mason University Board of Visitors.

“Right up until he was sick he always kept his love of learning and his love for public service,” his widow said. After he retired, he volunteered as a poll observer and on the disaster relief team for the American Red Cross.

He died from non-alcoholic fatty liver disease, hospitalized or in rehab since May, said his daughter, Emily Crouch Vitan.

Crouch “served his community … very diligently,” Reynolds said. “My heart goes out to them.”

Arrangements for a memorial service will be announced.

On the day before Thanksgiving, dozens of volunteers gathered at the Henry County Food Pantry in Bassett to provide a drive-thru holiday meal …

Bob Crouch (second from right) continued his Martinsville and Henry County friendships throughout the years after he left this area. He and his wife, Clara, are pictured with Jewell Jamison (left) and Pete Jamison (right).

Bob Crouch sits with his dog, Nattie, in September.

Bob Crouch (with his wife, Clara) was Clerk of Henry County Circuit Court from 1975 to 1984. Then he entered law school, worked for a Martinsville firm and went on to become U.S. Attorney for Western Virginia.