Since the pandemic has taken hold of society, the Blue Ridge Regional Library has been providing materials to make learning and entertaining oneself from home easier and more accessible. That includes now offering WiFi hotspots available to be checked out for two weeks at a time. 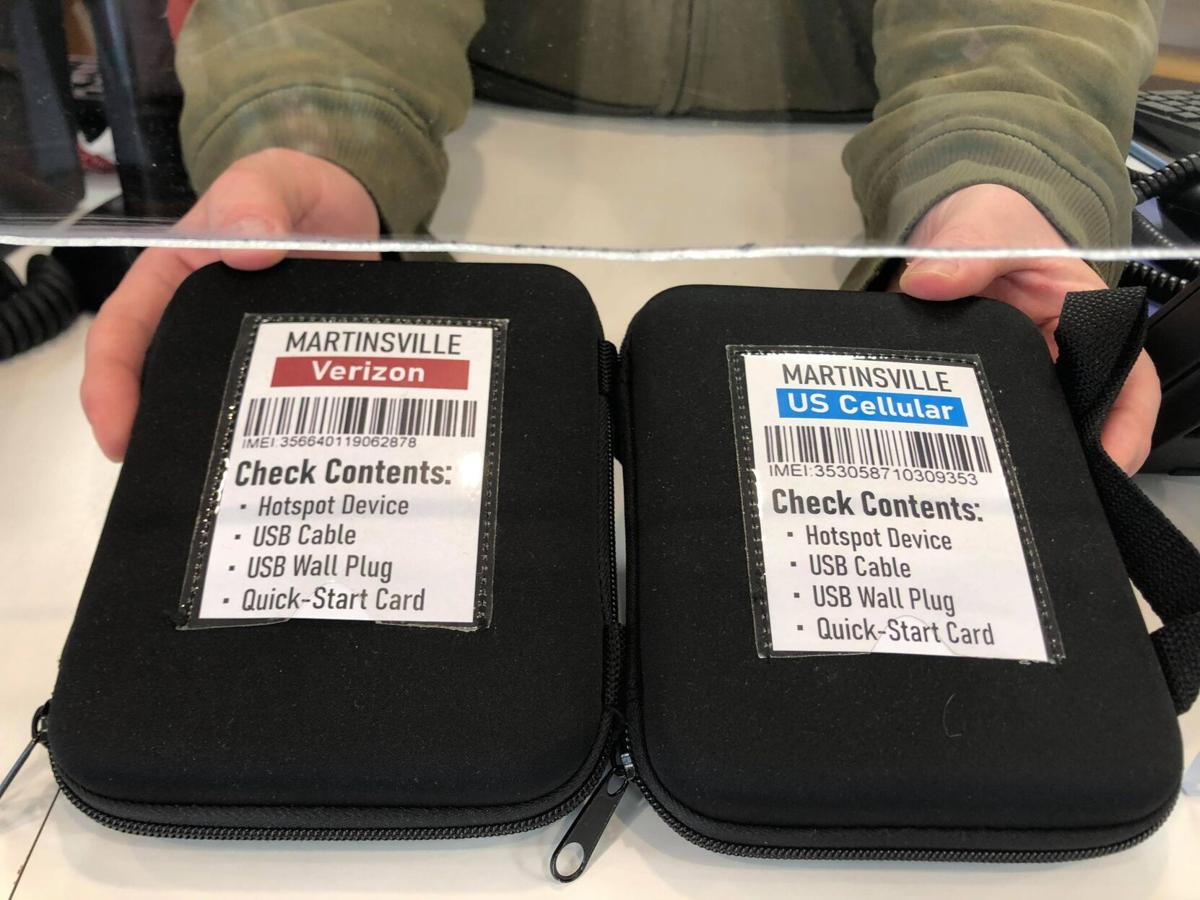 The WiFi hotspots available for checkout from Blue Ridge Regional Library are geared toward K-12 students, and are available from two internet companies, so a patron can choose the one that works best where he or she lives. 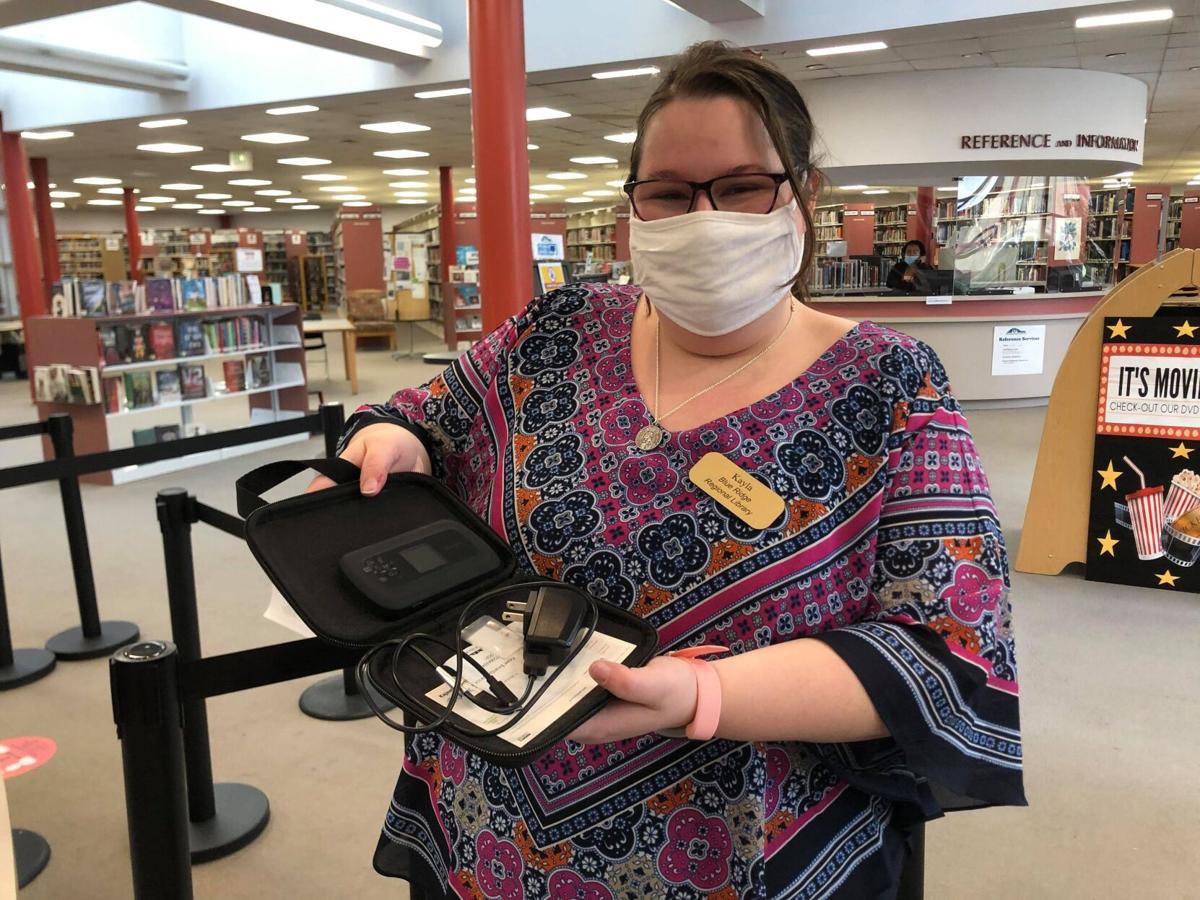 Circulation Assistant Kayla Webb shows one of Blue Ridge Regional Library’s WiFi hotspots, which can be checked out for two weeks at a time.

That funding was administered through a grant from the Library of Virginia and Institute of Museum and Library Services, he said, and was used to provide residents with resources to adapt to the pandemic, with a focus on materials that can be accessed from anywhere, because the library buildings are closed to visitors.

The BRRL now has internet hotspots that can be checked out. A hotspot is a device that brings internet to tablets, iPads, computers and other electronic devices within its range.

There’s a second range of choices for the hotspots as well: Verizon or US Cellular. That only refers to the company offering the internet service on each particular device and has nothing to do with whatever carrier a library patron would have for his or her own phone service. The patron simply would choose which of those two companies has better service in the area where the hotspot would be used.

In November, the library system started offering Hoopla, a digital media service that allows library patrons to borrow movies, music, audiobooks, e-books, comics and TV shows to see on computers, tablets, phones and even TVs. Titles can be streamed immediately or downloaded to phones or tablets to use when offline later. Hoopla has more than 850,000 titles in its collection.

Despite the novelty of many of its selections, it’s e-books that are checked out most often, BRRL IT Supervisor Brian Robinson said.

He is a fan of Hoopla’s offerings of comics and graphic novels. “One of the great things about Hoopla is they have an action view. It takes you through the whole pane,” one at a time, he said.

Because the library has to pay for each time a person checks out something, each patron is limited to only four items each month. The check-out prices vary according to items.

“If we had it wide open, one person would zip through” a lot of charges to the library, Ward said.

Because there’s a limit, Robinson recommends using it to check out the graphic novels, which gives “more bang for your buck.”

CARES Act funding also paid to extend WiFi services outside the building, install hand sanitizer dispensers and to order Chromebook laptop computers that will be available for checkout.

The Newsbank service at BRRL offers current editions plus archives of more than 3,500 news sources, including newspapers, from across the nation, all accessible with simply a library card.

“All of our patrons who come in and read the paper can’t do that anymore” because the library is closed to traffic, Ward said, so Newsbank allows them to do it at home.

You can search the database by newspaper, or by topic, which pulls up results from all the newspapers in its collection.

Of course, the library has books you can check out, just like it always has. Because of the pandemic, you have to call ahead and reserve the books you would like. You can look up books on the online card catalogue, or simply tell a librarian what interests you, and he or she will make suggestions to help you decide. Less than half an hour later, you can drive to the library and pick up your selections without even getting out of the car.

Already at the library

Check the “Resources” page – scroll down to “Online Databases” at the bottom. To use them, sign in by selecting “Blue Ridge Regional Library” and then entering your library card number. Here's what you will find:

Under the “eGoverment” page the library’s website has links to government information, such as grants, benefits, student aid, health and human services, business and labor, housing, legislation, taxes and federal statistics.

Ashleigh Pritchard was featured for her oil work of people's animals.

The optimism in Ashley Eggleston’s smile is heartbreaking.

PATHS' new mobile unit will take vaccinations on the road.

The unit will travel around the region to provide COVID-19 vaccines to people who have difficulty getting access.

Dewey and Juanita Shelton both survived COVID-19 and have pre-existing medical conditions. They want to be vaccinated. Their patience is being tested.

Since the pandemic has taken hold of society, the Blue Ridge Regional Library has been providing materials to make learning and entertaining oneself from home easier and more accessible. That includes now offering WiFi hotspots available to be checked out for two weeks at a time.

The WiFi hotspots available for checkout from Blue Ridge Regional Library are geared toward K-12 students, and are available from two internet companies, so a patron can choose the one that works best where he or she lives.

Circulation Assistant Kayla Webb shows one of Blue Ridge Regional Library’s WiFi hotspots, which can be checked out for two weeks at a time.