© 2020 Lee Enterprises
Terms of Service | Privacy Policy
WATCH NOW: Comcast to expand cable service in some areas of Henry County under 10-year franchise agreement with Henry County
0 comments
Share this
Only $5 for 5 months
1 of 3 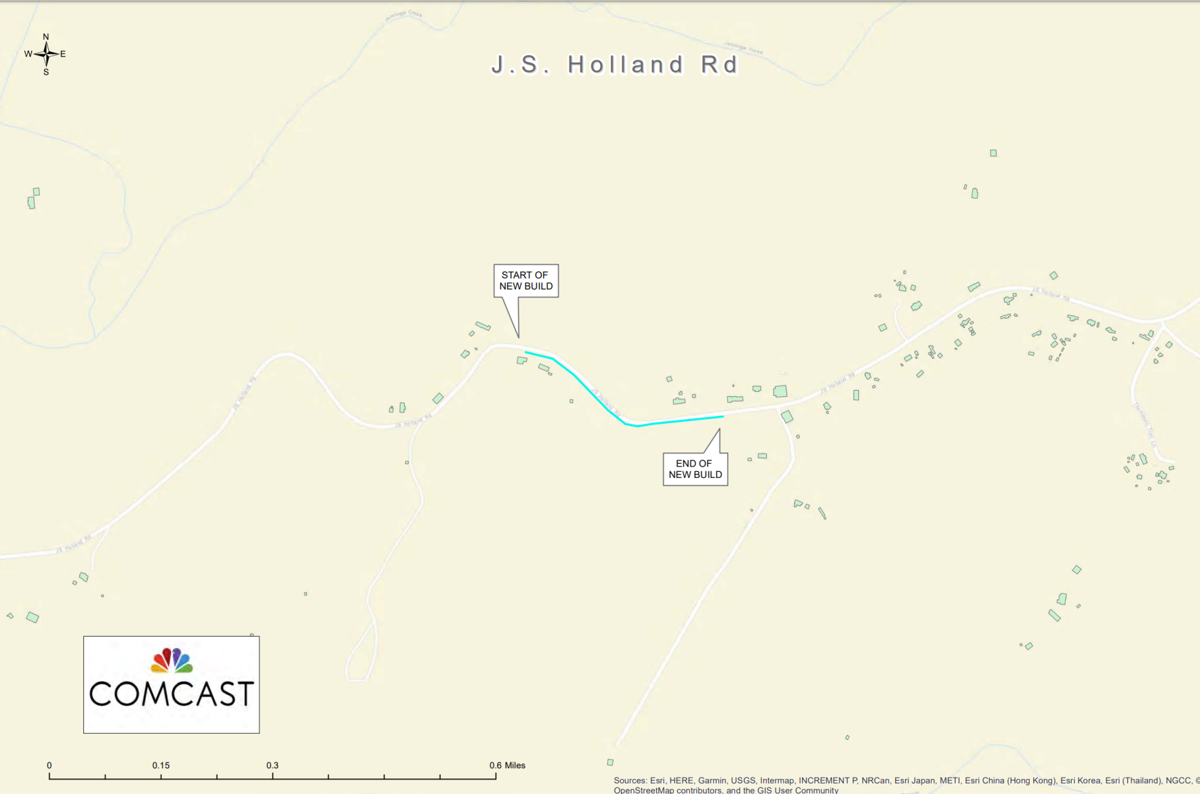 A map presented to the Henry County Board of Supervisors as part of Comcast franchise agreement negotiations shows the area of planned expansion on J.S. Holland Road in the Horsepasture area. 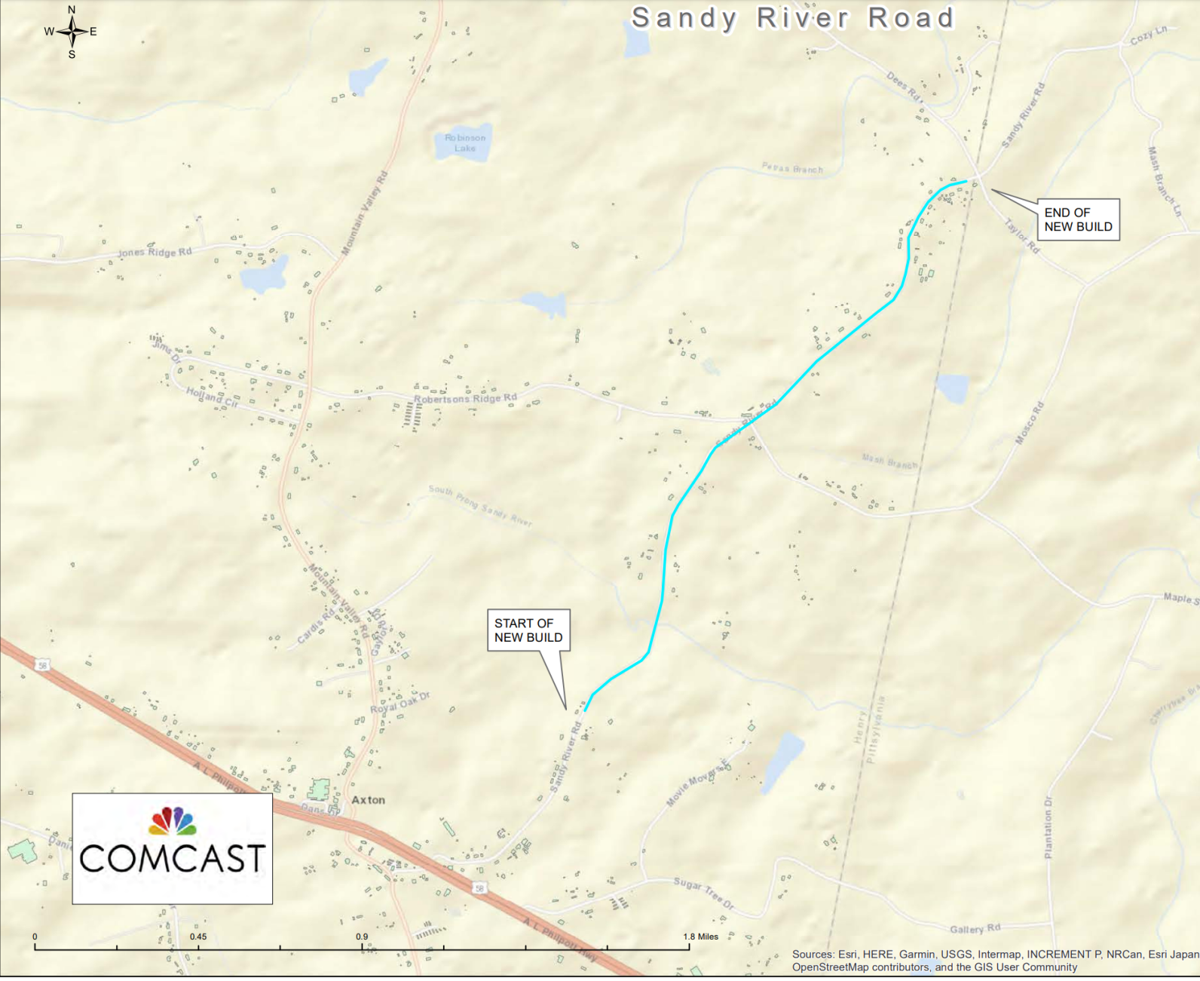 A map presented to the Henry County Board of Supervisors as part of Comcast franchise agreement negotiations shows the area of planned expansion on Sandy River Road in the Axton area. The Henry County Board of Supervisors pictured Tuesday afternoon, when they approved a new 10-year franchise agreement with Comcast.

Comcast will extend service along two roads in Axton and Horsepasture under the terms of its 10-year cable franchise agreement with Henry County, which the Board of Supervisors approved Tuesday.

The agreement gives Comcast a year from signing to complete construction along roughly half a mile of J.S. Holland Road and 1.8 miles of Sandy River Road in the Iriswood district, board documents show. Comcast has also agreed to expand its network when neighborhood density reaches 20 homes per linear mile, instead of the past minimum of 30.

Still, county officials noted, this leaves many rural pockets of the county where high-speed internet service is not available. While the franchise agreement only governs Comcast’s television and video services — not internet — it launched an in-depth discussion about efforts to bridge the gap.

“It’s kind of timely that we’re doing it now,” Martin said of the franchise agreement, which supervisors first considered in February and then tabled to allow more time for consideration. “Our school system is going to a virtual delivery system, and we have a county where the internet access is not what it should be because people are living in rural areas.”

Even with the service expansion, “that doesn’t chip away at the number of students who still do not have internet service to receive instruction in the coming year,” Martin said.

Henry County Schools has been working on different options to help students learn remotely. The district is providing all students from preschool to 12th grade with iPads or other devices to use at home, and most school parking lots are now equipped with free wifi for families to use from their vehicles.

For students with no internet at home, the county is using federal CARES Act relief funds to order hundreds of mifi devices, which tap into cell networks to create a mobile wireless hot spot. However, they don’t work in areas with no cell service.

Comcast currently provides “courtesy service” at no charge in 31 government-related locations in the county, including public school buildings, the sheriff’s office and jail, libraries, rescue squads, and fire departments, board documents show. Daugherty added that because of the COVID-19 crisis, Comcast is offering its $9.95 Internet Essentials package at no cost for two months to new customers who meet income requirements and sign up by December. The service offers a speed of 25Mbps download and 3Mbps upload.

Also, he told the board, Xfinity has opened up 1.5 million public wifi hotspots to everyone at no cost. People can search for local hotspots at www.xfinity.com/wifi.

Martin asked, “Is there anything else Comcast can do to help us? What has to happen for you to extend those hot spots into areas of the county where there is no cell service?”

Daugherty said he could not commit to specific outcomes before having a conversation with county officials, but he would be happy to meet with Strayer to discuss the options.

When the Board of Supervisors had a public hearing about the Comcast agreement in February, most of the discussion and opposition centered on the company’s plans to close its only customer service center in Martinsville to the public. Comcast cited “declining foot traffic” in its decision and has been promoting online options for customers to conduct business instead.

However, COVID-19 seems to have made this a moot point. The location on Commonwealth Blvd. has been closed since mid-March because of the pandemic.

In their negotiations with Comcast, county officials have said they asked about replacing the payment window with an Xfinity retail store, similar to the one in Danville, but were told that was “not in their business plan.”

Even so, County Attorney George Lyle told the board Tuesday afternoon, “It’s still probably a better agreement than if we went to court and disputed it.”

The new franchise agreement replaces an outdated one that expired “many, many years ago,” Lyle said. It will be in effect for 10 years and automatically renew for another five unless either party makes a written request to re-negotiate before the seven-year mark.

One challenge to rural broadband expansion is identifying the scope of the problem. It’s difficult to get an accurate number of households that lack internet access because of flaws in the federal data, advocates say.

Broadband maps from the Federal Communications Commission (FCC) tend to give a “misleading” and “exaggerated” picture of coverage in rural areas, according to a report from Commonwealth Connect, Gov. Ralph Northam’s plan to expand broadband access to rural and underserved areas of Virginia.

The FCC relies on internet service providers to self-report the data used to construct the maps. This is problematic because “private-sector providers are reluctant to offer what they consider proprietary data,” the report states. Also, if a provider offers service to at least one household in a census block, the FCC counts the entire block as covered.

This means the FCC’s most recent estimate that 21.3 million Americans, or 6.5% of the population, lack access to broadband internet does not give the full picture.

A tech organization called BroadbandNow tested the federal number by manually checking internet availability for addresses within “covered” areas and found numerous gaps in service. Instead, they estimate the true number is closer to 42 million people.

What does that mean for Henry County’s numbers? A map from Purdue University’s Center for Rural Development shows as much as 38% of Martinsville and Henry County’s population lacks home internet access and relies on cellular data only.

Another model focused on school-aged children estimates there are 2,500 students in Henry County and 676 in Martinsville with no internet at home. That’s according to Digital Bridge K-12, a national nonprofit initiative to connect public schools with high-speed internet.

Deputy County Administrator Dale Wagoner said Henry County has excellent broadband service for its industrial parks and commercial centers through Mid-Atlantic Broadband. “Where we have gaps are primarily on the residential end,” he said.

Even in areas of the county that are already connected to cable, that doesn’t mean individual houses have access. For example, Wagoner said, “Eggleston Falls Road has Comcast service all the way to the end of that road, but we have houses and residents who can’t get Comcast because they built their house 1/4 mile or 1/2 mile off the road. It makes it really difficult for the service provider to justify the expense to run cable to that one house.”

In the franchise agreement, Comcast’s standard installation rate for new service covers locations within 125 feet of the public right-of-way. That means houses farther back from the road must foot the bill to extend the line.

The rural broadband problem comes down to population density — in sparsely populated areas, there aren’t enough potential customers for companies to justify the cost of spending tens of thousands of dollars building out broadband infrastructure. That’s why many localities in Virginia, including Henry County, are looking at grant funds to fill those gaps.

Wagoner said county officials have been in conversation with the state and other potential funders to expand broadband in the area. The next step will be to seek grant funds from sources like The Harvest Foundation and Appalachian Regional Commission to commission a study to diagnose the scope of the problem.

“Once we get that study, then we’ll be able to work with [internet] providers directly and issue an RFP to get services into those communities,” he said.

The good and bad news, Wagoner said, is that “from a rural standpoint, we are doing comparatively well,” with internet access that is “leaps and bounds ahead of our neighbors.”

So, while there is still need in Henry County, funders have told Wagoner that they would be “in back of the line.”

That’s not going to stop the county from pursuing grant funding, he told the board. “Our shot is low, but we’re going to go after it.”

A map presented to the Henry County Board of Supervisors as part of Comcast franchise agreement negotiations shows the area of planned expansion on J.S. Holland Road in the Horsepasture area.

A map presented to the Henry County Board of Supervisors as part of Comcast franchise agreement negotiations shows the area of planned expansion on Sandy River Road in the Axton area.

The Henry County Board of Supervisors pictured Tuesday afternoon, when they approved a new 10-year franchise agreement with Comcast.