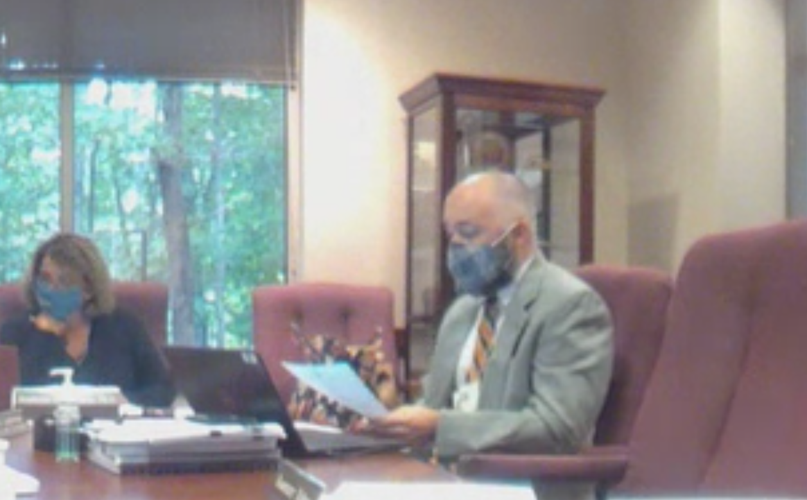 The Commission on Local Government issued the recommendation for Martinsville’s reversion from a city to a town at its offices in Richmond on Friday. 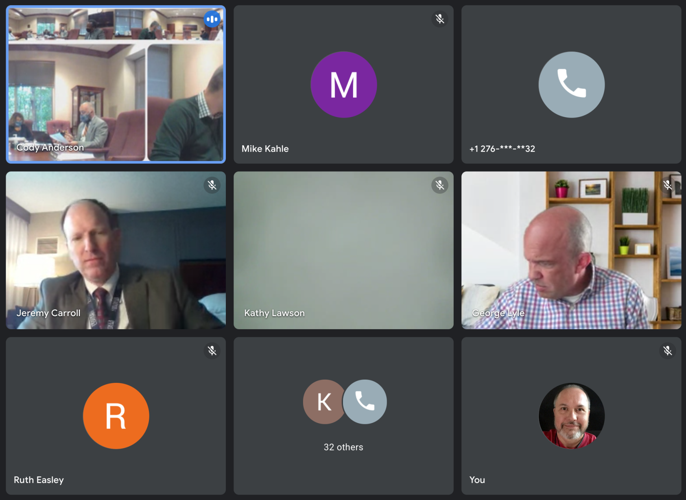 There were 43 people on the Google Meets virtual meeting of the COLG when it began on Friday. 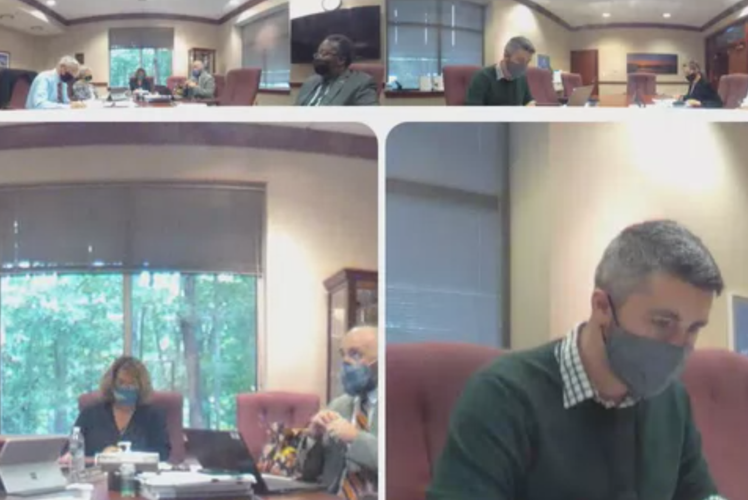 The COLG meeting in Richmond on Friday could be watched from anywhere over Zoom.

The recommended effective date in which the city of Martinsville will forfeit its independent status and become a town in Henry County will be July 1, 2023, if a three-judge panel approves the recommendation of the Commission on Local Government (COLG).

Martinsville and Henry County hammered out an agreement at a two-day private session in April before a mediator and the resulting memorandum of understanding proved to be a a series of compromises. The COLG’s chosen date was another extension of that process.

Martinsville asked for reversion to take place as early as next year, while Henry County argued a date no sooner than 2024 was needed to allow for an orderly transition of courts, jails, schools and tax records.

The commission concluded at a meeting on Friday in Richmond that 2022 was too early to complete the most complicated reversion in the state’s history, but the fiscal stress on Martinsville was too great to wait until 2024, so a compromise was recommended between the two.

“In the next steps, the local governing bodies will adopt the report, either the original or a version amended by both parties, and may require additional review,” said COLG Director David Conmy. “Also a public hearing will be held and then a local circuit court judge will request a three-judge panel [be established] with the commission’s report submitted as evidence.”

Shortly after the recommendation was made, city officials said they were satisfied with the commission’s decision.

“The City is pleased that the Commission on Local Government voted unanimously to adopt a report today acknowledging that the voluntary settlement agreement (VSA) between Martinsville and Henry County meets the criteria for Martinsville to revert to town status and that reversion is in the best interests of Martinsville, Henry County and the Commonwealth,” a release stated. “We appreciate the hard work and diligence of the commission and its staff in preparing its report and look forward to review by the three judges who will soon be appointed to the special court.”

There was no public statement from Henry County officials regarding the COLG’s recommendation.

Martinsville Circuit Court Clerk Ashby Pritchett had notified city council members and the COLG that it is his opinion the VSA is an unenforceable document because it assumes the city has authority to dissolve the Martinsville City School System. Pritchett maintains the Martinsville School Board is a legal entity created by the state and state law does not provide for a local government to assume the authority of the state.

Conmy addressed Pritchett’s concerns at the meeting on Friday, saying, “the commission does not or cannot reach or conclude any questions regarding legality. This will be determined by a court of local jurisdictions.”

Conmy said the commission’s recommendation is a “finding of fact only” and “not legal opinion.”

Martinsville School Board Chair Donna Dillard also said she was pleased with the recommended effective date.

“The commission’s recommendation for reversion to occur July 1, 2023, is welcomed,” said Dillard. “As I’ve mentioned previously, our focus is always on the best interests of our students. It is also very important that the right process be followed.”

Dillard has also questioned the city’s assumption of authority to dissolve the city school system and said she hopes the consolidation of Martinsville and Henry County schools will proceed with the input of her board and the school system’s administration.

“I am hopeful that this recommendation will give Martinsville City Public Schools a voice in the process and an active role in making education decisions for the future of our students,” Dillard said. “We will continue to do everything that we can to ensure the continued success of our students and will remain available to coordinate a path forward with Henry County Public Schools.”

The commission’s recommendations are detailed in a 32-page document that remained in draft form after the meeting Friday afternoon.

“The draft version of the report will remain as such until staff is able to incorporate changes discussed in today’s commission meeting,” said Conmy during the meeting. “We hope to have the final report taken care of next week.”

That draft recommends the VSA between Henry County and Martinsville be approved by a three-judge panel in its entirety.

“We find that the agreement promotes the viability of both local governments and is consistent with the best interests of the two jurisdictions,” the commission’s report states. “Accordingly, we recommend the court’s approval of the agreement.”

The report notes that more than 100 people attended a public hearing at New College Institute last month, and most of the comments involved matters of equity.

“The city is one of the most racially diverse areas in the region, and hosts a primarily Black or African American population compared to the county,” the report states. “During the public hearing offered by the commission, citizens voiced concerns over the impact reversion would have on Black students who would have to be integrated into county schools, community engagement, and the impact on the city’s voting power when included in the County Board of Supervisors and School Board districts.

The report says that both Martinsville and Henry County have elevated levels of poverty and unemployment, and both are more acute in the city.

In addressing this disparity, the commission’s report noted that Martinsville offers universal 3- and 4-year-old early childhood education services at Clearview Early Childhood Education Center, while the county “only provides this service to four-year-olds who qualify based on income eligibility.”

Clearview is not included in the transfer of school buildings upon reversion, and the commission’s report suggests it be added to the list and encourages Henry County Schools to continue it current use.

Martinsville officials addressed the request in its response Friday afternoon.

Failing a transfer of the program from the city to the county, the commission recommended that the city consider continuing the program at Clearview on its own as a town.

“There is potential for the City to take ownership of early childhood education in an elective environment akin to day support of child care,” the report stated.

Martinsville City Council has five members and the Commission notes that two of them are Black, while the six-member Henry County Board of Supervisors is entirely white.

The appointed Martinsville School Board also has five members and two of its members are Black, while the Henry County’s seven-member, elected school board has one Black member.

“We encourage the parties to consider—to the extent practicable and in accordance with state and federal laws—the possibility of raising this threshold so that more than one local election district could be comprised of territory located entirely within the boundaries of Martinsville,” the report states.

Encouragement to work together

The commission, in its report, encouraged Martinsville and Henry County “to engage with cultural leaders in the community to promote and cultivate a greater spirit of unity going forward.”

The report pointed out that a court order will cause the desired outcome of reversion through the proposed settlement agreement, but “it will not promote the harmony and cooperation that is necessary for the larger community to thrive.”

To that end, the commission calls for “unity in the face of significant headwinds” despite “high emotions and distrust.”

“The commission would like to remind all parties of their primary duties to serve and lead the citizens and not their own self-interests.”

There is no waning in the commitment to reopening Patrick County’s only hospital, but ongoing struggles are testing the resolve of those seeki…

Two separate crashes within sight of each other damaged seven vehicles, but resulted in no injuries.

Patrick and Henry Community College President Greg Hodges announced new hires and promotions in the P&HCC family at the regular board meeting that was held on Monday at the Dalton IDEA Center.

EDITOR’S NOTE: The Martinsville Bulletin will report arrest reports in Martinsville, Henry and Patrick counties, except some juvenile cases an…

UPDATED: Arrest made in bomb threat

Police have arrested a juvenile as the result of a bomb threat received by Laurel Park Middle School Friday morning.

The Commission on Local Government issued the recommendation for Martinsville’s reversion from a city to a town at its offices in Richmond on Friday.

There were 43 people on the Google Meets virtual meeting of the COLG when it began on Friday.

The COLG meeting in Richmond on Friday could be watched from anywhere over Zoom.