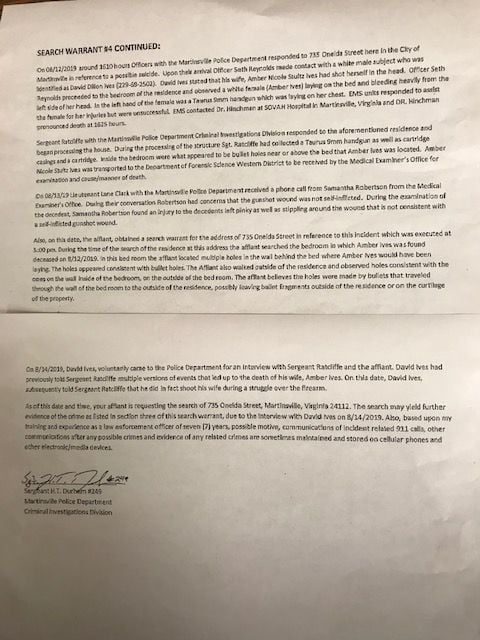 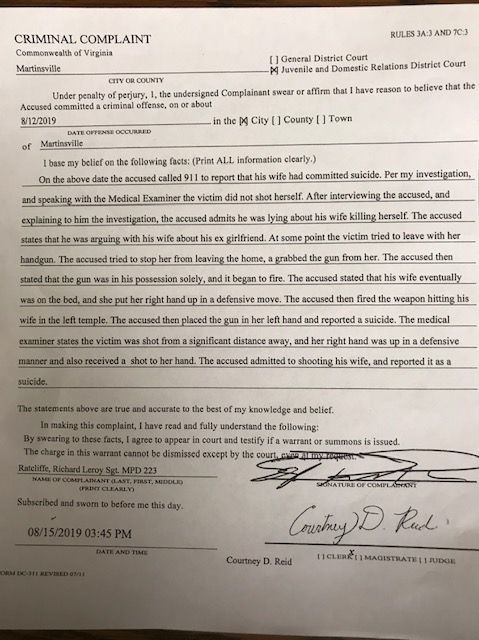 A man who called 911 to report his wife committed suicide has been charged with her murder after telling police officers he did in fact shoot her.

The Martinsville Police Department on Thursday charged David Dillon Ives, 25, with second-degree murder in the shooting death of Amber Stultz Ives, 25. The couple lived at 735 Oneida Street in Martinsville.

The police department also charged David Ives with use of a firearm in committing second-degree murder, discharging a firearm in an occupied dwelling and reckless handling of a firearm. He is being held without bail in the Martinsville City Jail.

Officer Seth Reynolds made contact with David Ives, who stated that his wife had shot herself in the head. Reynolds found Amber Ives lying on the bed and bleeding heavily from the left side of her head. In her left hand was a Taurus 9mm handgun that was lying on her chest.

EMS units responded, but Amber Ives was pronounced dead at the scene.

Sgt. Richard L. Ratcliffe of the police department’s criminal investigations division arrived at the home and collected the handgun, cartridge casings and a cartridge. Inside the bedroom were what appeared to be bullet holes near or above the bed where Amber Ives had been found, the reports said.

Her body was transported to the Department of Forensic Science Western District. On Tuesday Dr. Samantha Robertson from the Medical Examiner’s Office called MPD Lt. Lane Clark to say she had concerns that the gunshot wound was not self-inflicted, the documents stated.

During the examination of Amber Ives, Robertson found an injury to Amber’s left pinky as well as stippling — unburned powder and debris causing pinpoint abrasions on the skin — around the wound that is not consistent with a self-inflicted gunshot wound.

MPD Sgt. Harley T. Durham at 5 p.m. Tuesday used a search warrant to enter the Iveses’ home, and, according to the documents, he found multiple apparent bullet holes in the wall behind the bed where Amber Ives would have been lying.

Durham also walked outside and found similar holes on the outside of the bedroom wall. In the documents Durham said he believed the holes were made by bullets passing through the wall and that there could be fragments or cartilage on the property.

On Wednesday, the documents said, David Ives voluntarily came to the police department for an interview with Ratcliffe and Durham. Ives earlier had told Ratcliffe multiple versions of events that led up to the death of his wife.

But in this interview Ives is alleged in the documents to have admitted he had been lying about his wife’s suicide and that he shot her during a struggle over the firearm.

“The accused states that he was arguing with his wife about his ex girlfriend,” a criminal complaint says. “At some point the victim tried to leave with her handgun. The accused tried to stop her from leaving the home, grabbed the gun from her. The accused then stated that the gun was in his possession solely, and it began to fire. The accused stated that his wife eventually was on the bed, and she put her right hand up in a defensive move.

The document said that the medical examiner’s report states that the victim was shot from a significant distance and that her right hand, which was shot, too, was up in a defensive manner.

According to a search inventory and return, items seized from a search of 735 Oneida Street include one 9 mm Luger shell casing and a black sheet that was hanging behind the bed, among other items.

According to a checklist for bail determinations, David Ives has lived all his life in the community, received a GED, is not employed, and his family helps support him.

The investigation is continuing, and anyone with information about this crime is asked to contact Ratcliffe at 276-403-5331 or Crime Stoppers at 276-63-CRIME.

Martinsville man admits to killing his wife after reporting her suicide

Sentencing not yet set in plea deal on a charge of voluntary manslaughter. 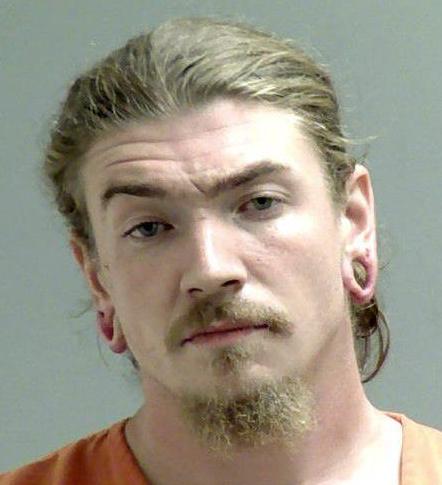