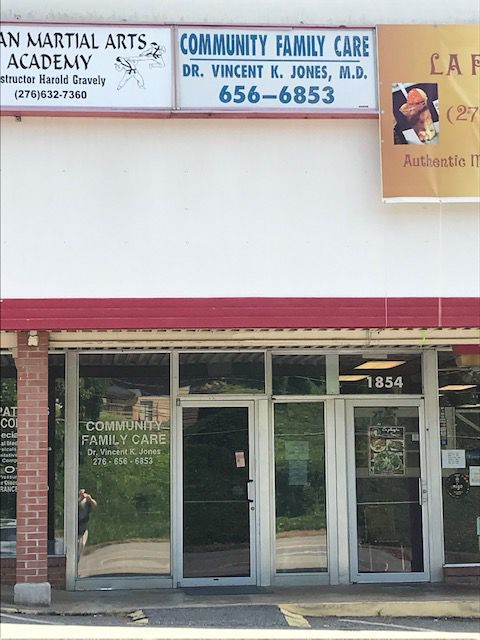 Dr. Vincent K. Jones’ home at 1308 Cardinal Lane, Martinsville, was searched as a result of federal search warrant, as was his medical practice, Community Family Care, is at 1856 Virginia Avenue in Holiday Shopping Center in Collinsville.

What happened to Dr. Vincent K. Jones of Martinsville between the time he was seen leaving his house on Monday morning and being declared dead just days later?

Where did he go? How did he die? Where was he found? Who sent his body to the medical examiner’s office in Roanoke?

And did he also know that law enforcement agents were about to show up at his house at 1308 Cardinal Lane in Martinsville when he drove away on Monday?

This much is for certain: Jones, an internist, has been enmeshed in a federal investigation for the distribution of illegal prescriptions and drugs, and this week he died.

Tracie Cooper, district administrator for the Office of the Chief Medical Examiner in Roanoke, said in an interview Friday morning that Jones died Tuesday, and she reaffirmed that the manner and cause of his death remain unknown. That determination could take a few weeks.

Federal search warrants issued in July alleged Jones and others were using his Community Family Care in Collinsville to distribute Schedule II and Schedule IV controlled substances (namely oxycodone and hydrocodone-acetaminophen and possibly others) and to commit health care fraud and wire fraud in violation of federal law.

Searches were conducted at that office in Holiday Shopping Center and at Jones’ primary residence on Cardinal Lane.

The documents didn’t specify when the investigation began, but they referred to a tip received about two years ago from a confidential informant of the Martinsville Police Department.

On Thursday afternoon, when Jones’ death became known, a neighbor of his on Cardinal Lane said she saw him leave his home about 8:30 a.m. Monday. She said that at about 8:55 a.m. she saw several vehicles pull up and park on Cardinal Lane, including some from Martinsville PD.

She said she didn’t know what law enforcement agency the “ladies” were from, “but the ones who parked right here in front of my house were city police. They sat right there after the rest of them left for 10 or 15 minutes.”

“A black SUV sat there for a long time, maybe an hour,” she said.

She said some other officers left earlier, and when she returned from a trip to the grocery store, they were all gone.

Otherwise Jones’ final hours are a series of unanswered questions and references to federal authorities for the answer even to how Jones’ death became known.

David Bowyer, AutoCAD technician for the Henry County Mapping and Engineering Department, said records indicate that Jones had owned two properties at 56 and 60 Ruths Creek Road in the Carver community (one with a home and one with what looked like a two-bay garage that may have been used as an apartment).

But Jones had sold those in December 2017 and still owns four nearby parcels with no structures on Ruths Creek Road, Bowyer said.

Officials with Henry County agencies could not immediately say Friday if there were any emergency calls to that area of Ruths Creek Road early this week. They had said earlier there were no calls to Cardinal Lane.

Katherine Hayek, a spokesperson for the U.S. Drug Enforcement Administration’s Washington, D.C., Division, which includes Maryland, Virginia and D.C. – speaking generally and theoretically and not about any specific case – said normally in an operation, DEA has people on scene who can administer lifesaving and CPR, and they have radios.

Kelli Clay, marketing manager of Sovah Health-Martinsville, wrote in an email: “As required by law, we protect the privacy of all of our patients, so we cannot discuss the specifics of any patient treated at our hospital.”

There also was a discrepancy about whether the Martinsville Police Department was the “informant” that told medical examiner about Jones’ death.

Cooper of the medical examiner’s office said in an interview Friday morning: “Martinsville police is the one who is handling the death investigation. They are the ones who referred the case to us.”

But Martinsville Deputy Police Chief Rob Fincher wrote in an email later Friday: “The Martinsville Police Department is not handling the death investigation into Dr. Vincent Jones. We have been told by the U.S. Attorney’s Office to refer all inquiries about Dr. Jones to their Public Affairs Specialist Brian McGinn….”

Fincher confirmed that in a subsequent telephone call.

When the Martinsville Bulletin contacted Cooper again about the matter on Friday afternoon, she said it was “listed in our system” that MPD contacted the medical examiner’s office about Jones’ death, but that since the Bulletin’s phone call Friday morning, she had been notified by the police department that it is a federal case.

On Thursday, Martinsville PD Chief Eddie Cassidy indicated he had no information about Dr. Jones’ death and repeated that when questioned again on Friday.

“It has and will always be the policy of the Martinsville Police Department to cooperate with our media partners and disclose whatever information about a particular case as long as that disclosure does not/or have the potential to interfere with ongoing investigations,” he said.

Said Fincher when asked further questions: “Like I said earlier, you need to talk to the US Attorney’s Office.”

Hayek said she could only comment generally and theoretically and not about any specific case.

“It’s public knowledge,” she said. “If we were ever to serve arrest warrants or search warrants, we serve them with joint agencies. We would likely go out with them, and it’s their jurisdiction.”

McGinn wrote in an email Friday afternoon in part, “At this point, there is nothing that I can comment on. I can simply point you to the documents already in the public record.”

The federal court records system indicated the most recent public filings were in July.

Martinsville doctor who was under federal drug investigation has died

A Martinsville doctor who was the subject of a federal investigation for the distribution of opioids has died.

Federal search warrants issued in July allege that there is probable cause to believe that Dr. Vincent K. Jones, an internist from Martinsvill…

Dr. Vincent K. Jones, an internist who was the subject of a federal investigation into distribution of opioids, was found unresponsive on Sept…

The investigation into the charges of illegal opioid distribution against the late Dr. Vincent K. Jones and the final hours of his life became…

Cause of death of Martinsville doctor under federal indictment pending

The cause and manner of death for Dr. Vincent K. Jones remain a mystery six weeks after he was found unconscious as federal investigators were…

Dr. Vincent K. Jones, who was found unconscious as federal investigators were about to arrest him more than three months ago, committed suicid…

Dr. Vincent K. Jones’ home at 1308 Cardinal Lane, Martinsville, was searched as a result of federal search warrant, as was his medical practice, Community Family Care, is at 1856 Virginia Avenue in Holiday Shopping Center in Collinsville.