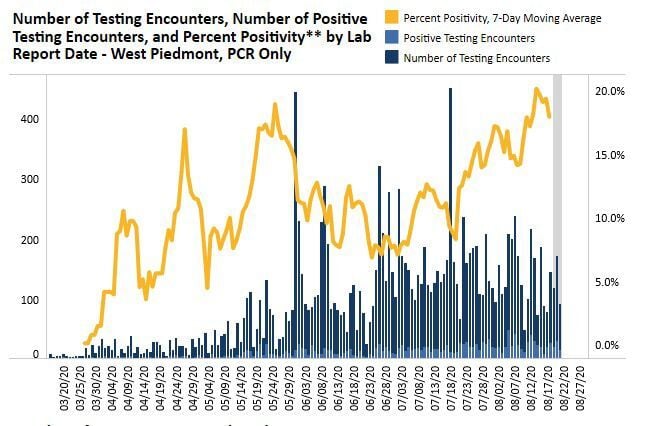 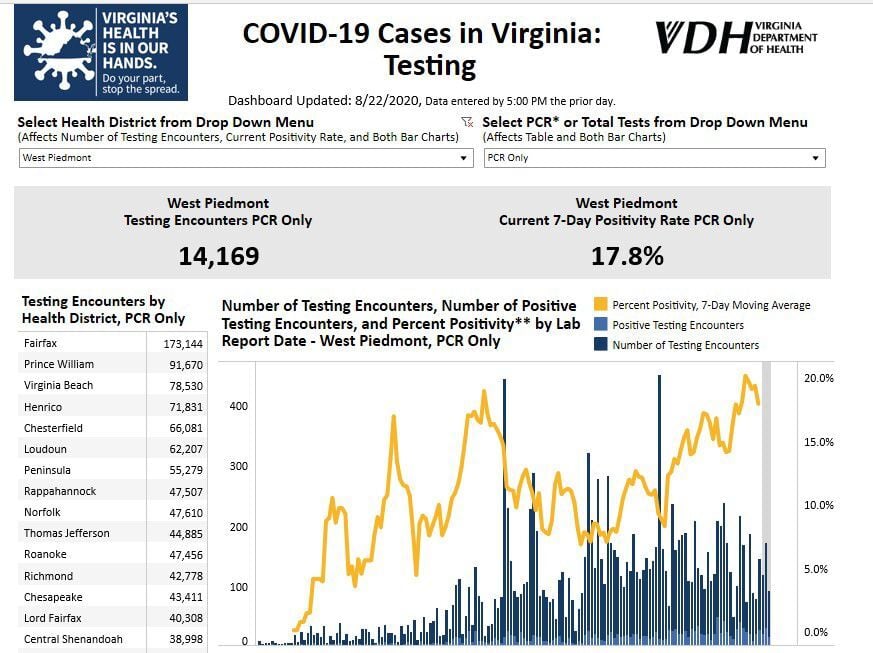 Test data from West Piedmont Health District, where positivity rate is much higher than state averages.

A very deadly week for COVID-19 in the West Piedmont Health District came to a rather quiet end on Saturday, the first day since Tuesday that no one died in the district.

One more resident of Henry County died of the illness caused by the novel coronavirus, the Virginia Department of Health reported on Friday morning.

That was the ninth death in the district in a 72-hour span and the 10th in the prior week.

That brought to 27 the total number of deaths in the district.

There were no details available about this latest death. VDH tracks cases and deaths by the person’s residence and not where the virus may have been contracted or the person treated. No private information, including how the person contracted the virus, is released.

Although there was no reported death on Saturday by VDH, the surge in cases and hospitalizations continued in the district.

There were 41 new positive tests for the novel coronavirus on Friday (15) and Saturday (26) and five more hospitalizations.

Henry County topped the list, with 24 of the cases and three of the hospitalizations in addition to the fatality.

Martinsville had 11 and one hospitalization, and Patrick County had three and one. Franklin County, which is also part of the district, had only one new case.

Outbreaks at senior-care facilities have been causing many cases lately, most recently with reports from Mulberry Creek Rehab in Martinsville and Stanleytown Health & Rehab in Fieldale. Blue Ridge in Stuart also has been hit hard with several deaths and dozens of cases among residents and employees.

Since the outset of the pandemic West Piedmont has recorded 1,410 cases and 174 hospitalizations along with the 27 deaths.

VDH reported Saturday that there have 112,072 cases and 2,443 deaths statewide — up seven from Friday. Some 9,139 people have been hospitalized.

Test data from West Piedmont Health District, where positivity rate is much higher than state averages.