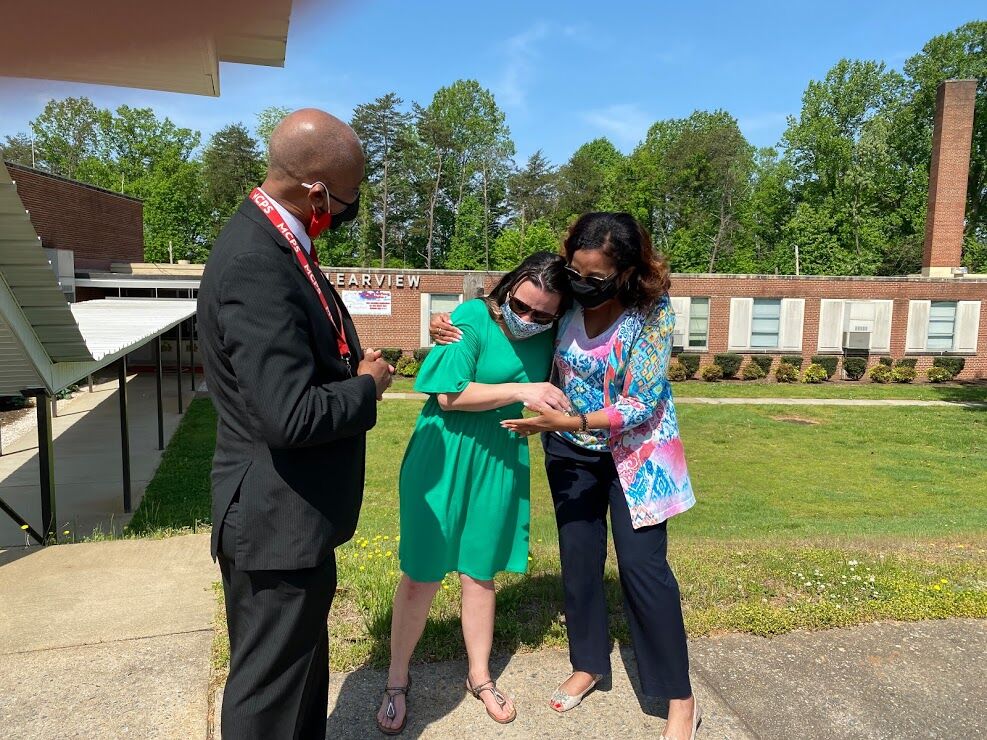 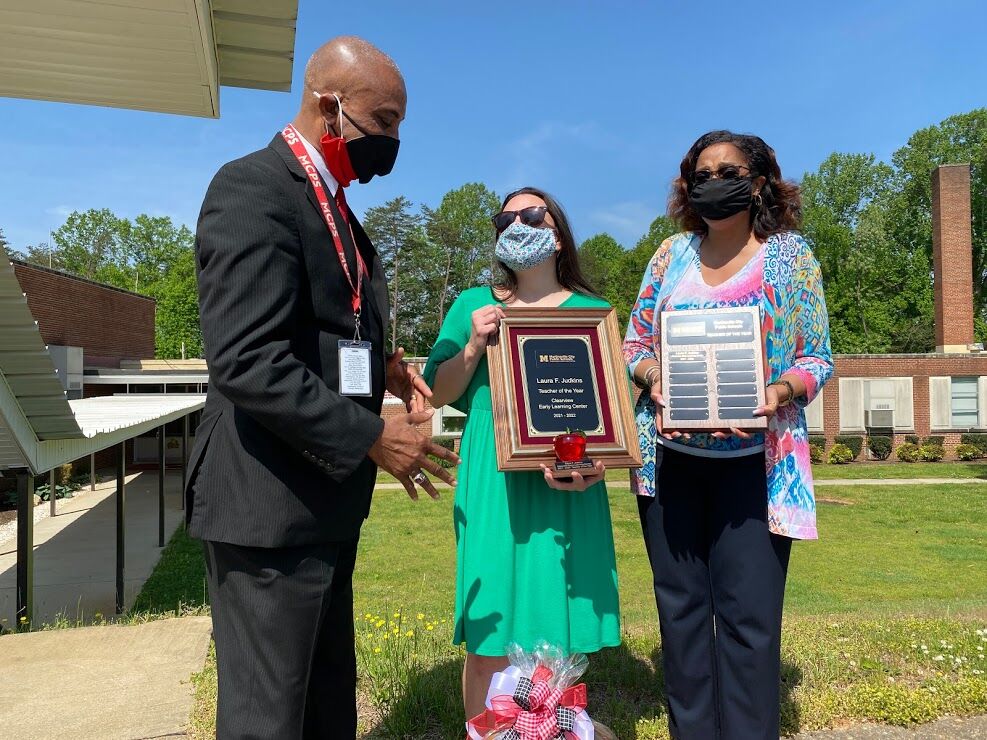 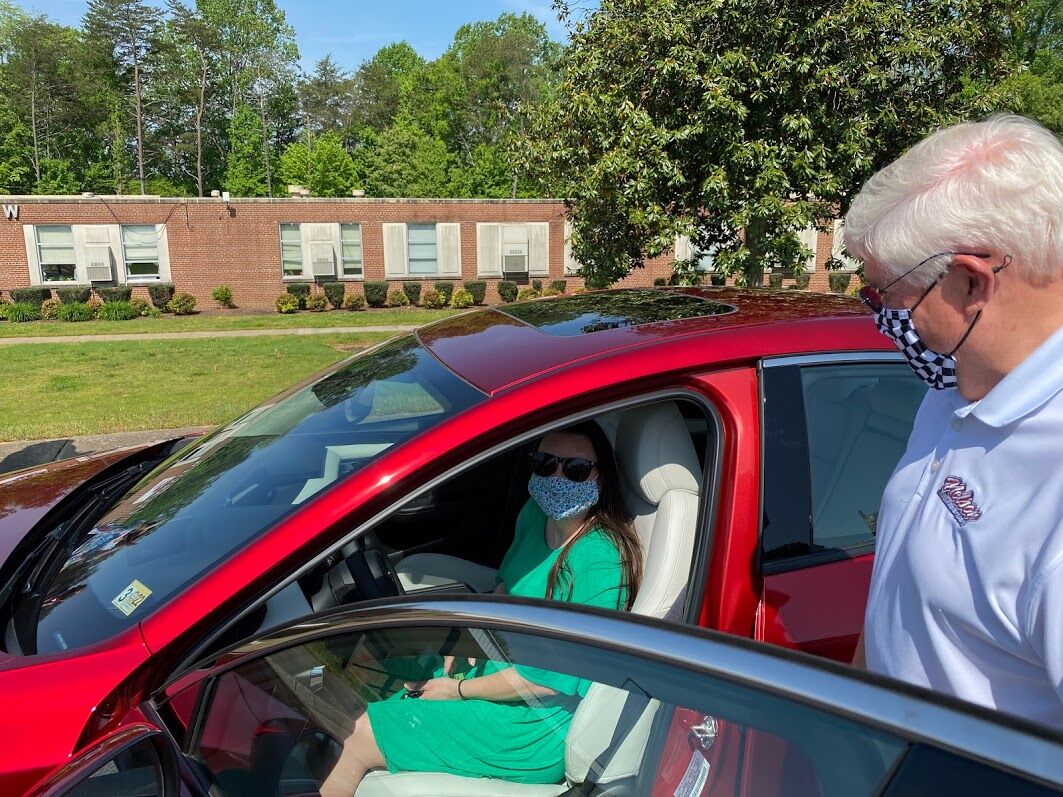 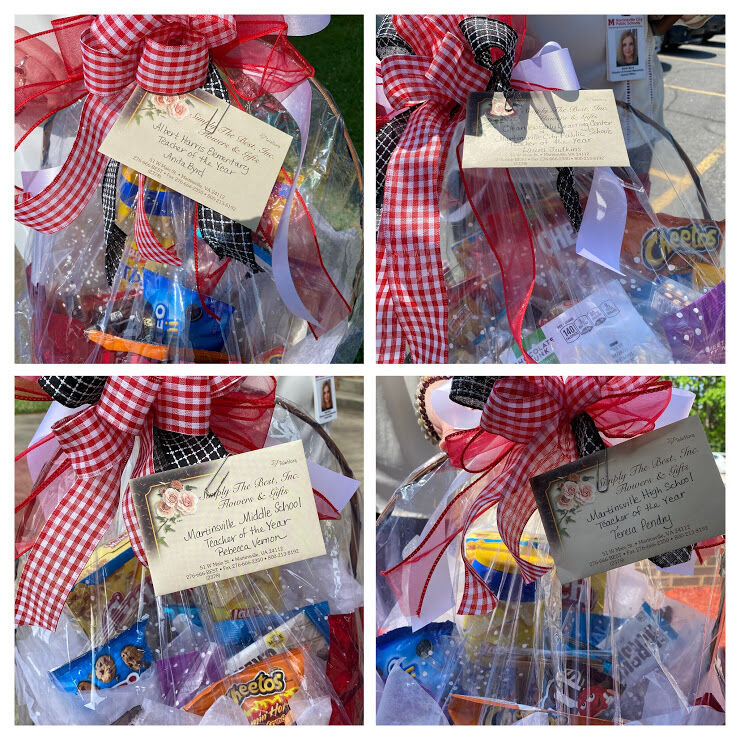 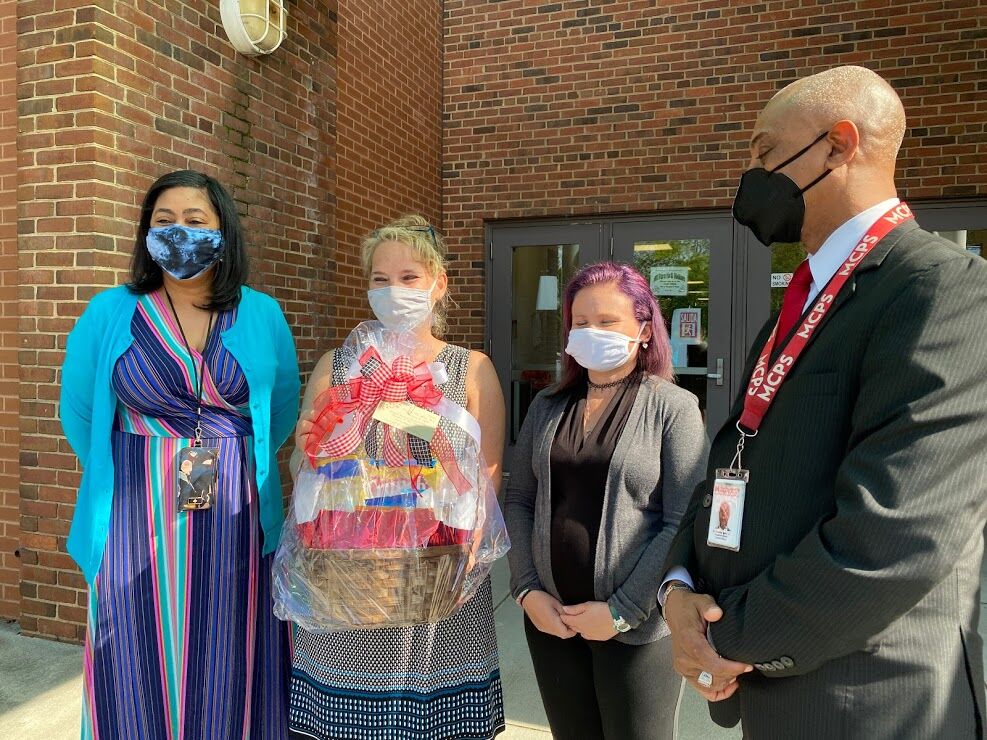 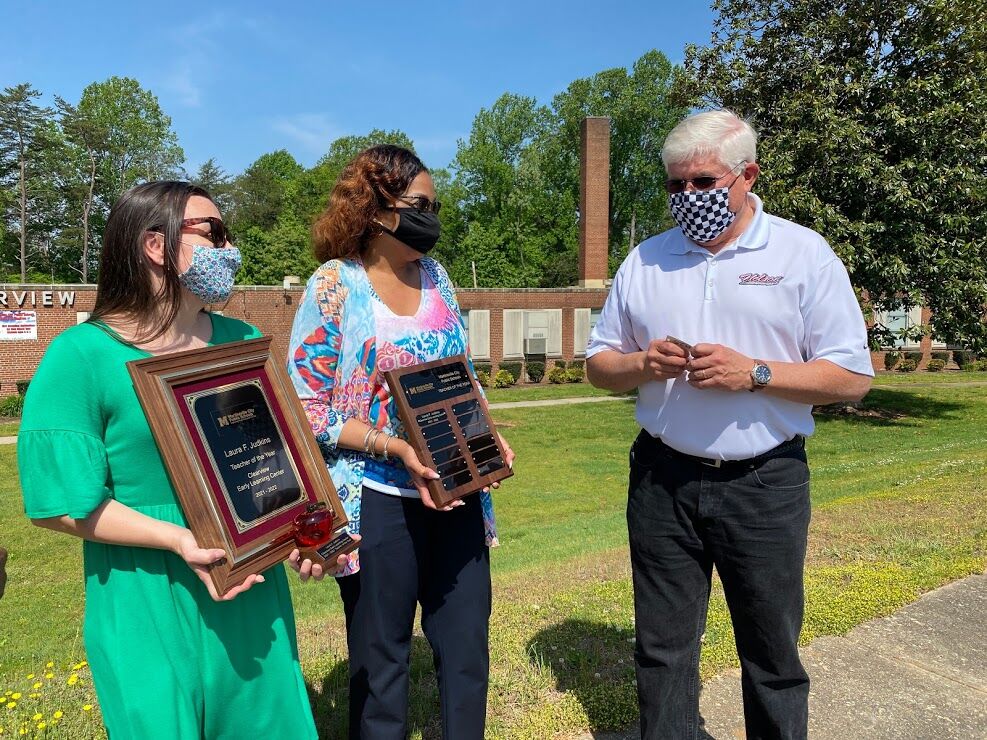 Laura Judkins (left) about the receive the keys to a new car from Barry Nelson (right). Clearview Early Learning Center Director Sheilah Williams is in the middle. 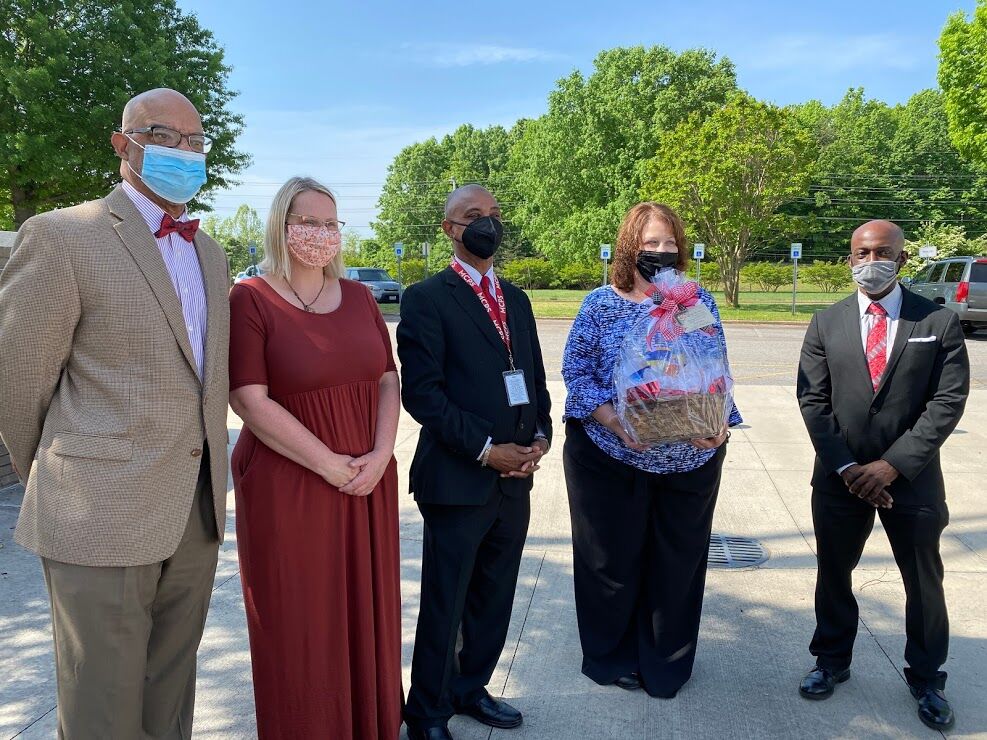 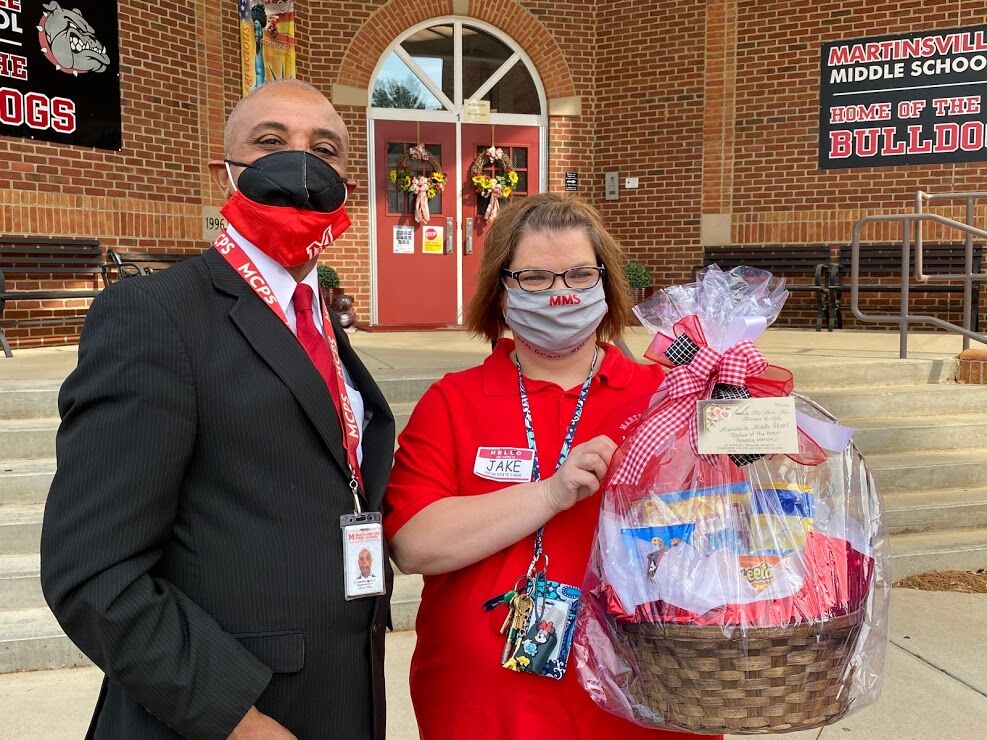 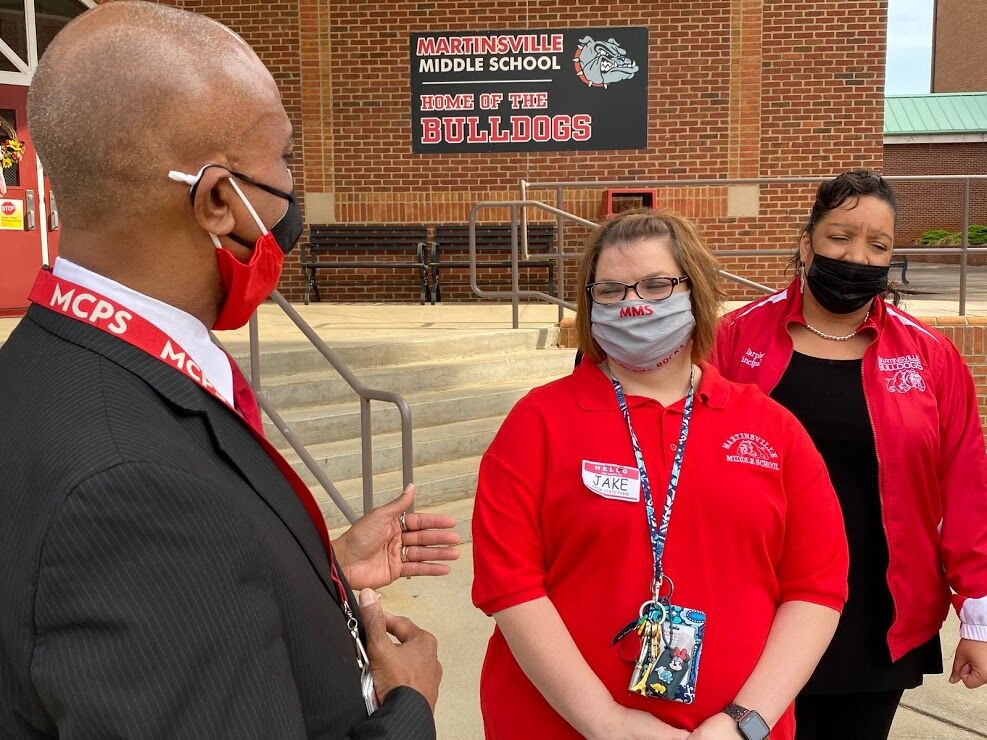 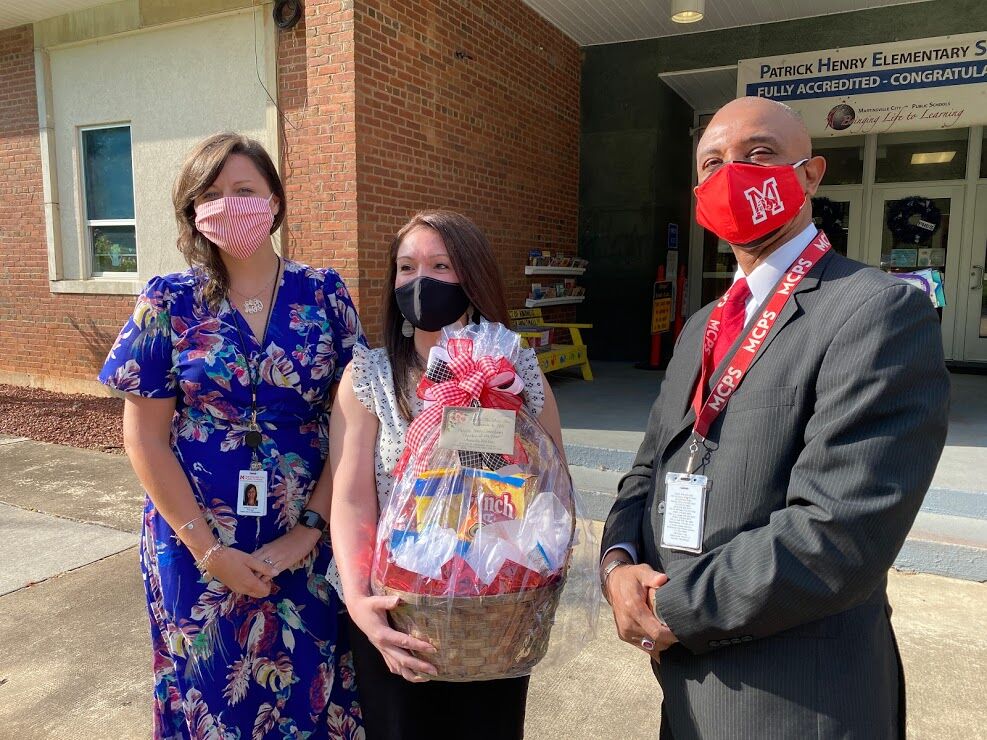 She was caught off-guard Tuesday when Martinsville Superintendent Zeb Talley arrived for a planned award presentation.

Overcome with excitement and emotion, Judkins accepted the keys to a new car from Barry Nelson with Nelson Auto Group. She will have use of the car for the summer.

“She’s a Martinsville product,” Talley said. “She came through Martinsville High School, and if you ever get a chance to go in her classroom, you’ll see the passion and the tears some days, because she wants students to learn.”

The morning started at Patrick Henry Elementary School, where Amanda Keesee, a kindergarten teacher, received her award for being named teacher of the year for her school. Keesee has been an educator for six years.

Then Talley presented Rebecca Vernon with an award for being the teacher of the year at Martinsville Middle School. Vernon teaches the sixth grade and has been an educator for 16 years.

At Albert Harris Elementary School, Anita Byrd was honored for her work as a fourth-grade teacher. Byrd has been an educator for six years.

Teresa Pendry is a math teacher at Martinsville High School and has been an educator for three years. Pendry received an award for being this year’s high school teacher of the year.

“It’s one of the most exciting things of the year for me every year,” Talley said. “We get a chance to highlight the individuals that really make education great—the teachers.

“The work hard, they worked through the pandemic, and we see the effect of students not being able to get to school across the nation because we are all facing learning loss.”

Talley said regardless of the advantages or disadvantages a given school district may have, ultimately its success or failure will be determined by the quality of its teachers.

“Without teachers we can’t do this job, so every success that a division has, you have to attribute it to teachers,” Talley said. “This is really where the rubber meets the road.”

Ala. youth ranch mourns death of 8 kids in crash

Ala. youth ranch mourns death of 8 kids in crash

WATCH NOW: Henry County School Board member asks if local businesses are getting their fair share of contracts

"There are misconceptions of spending and not supporting local businesses."

His term could take him beyond when reversion merges his district with Henry County Public Schools.

All lists are provided by the schools. The honor roll requires students have at least one A or E with the rest B or S (depending on grade leve…

Laura Judkins (left) about the receive the keys to a new car from Barry Nelson (right). Clearview Early Learning Center Director Sheilah Williams is in the middle.