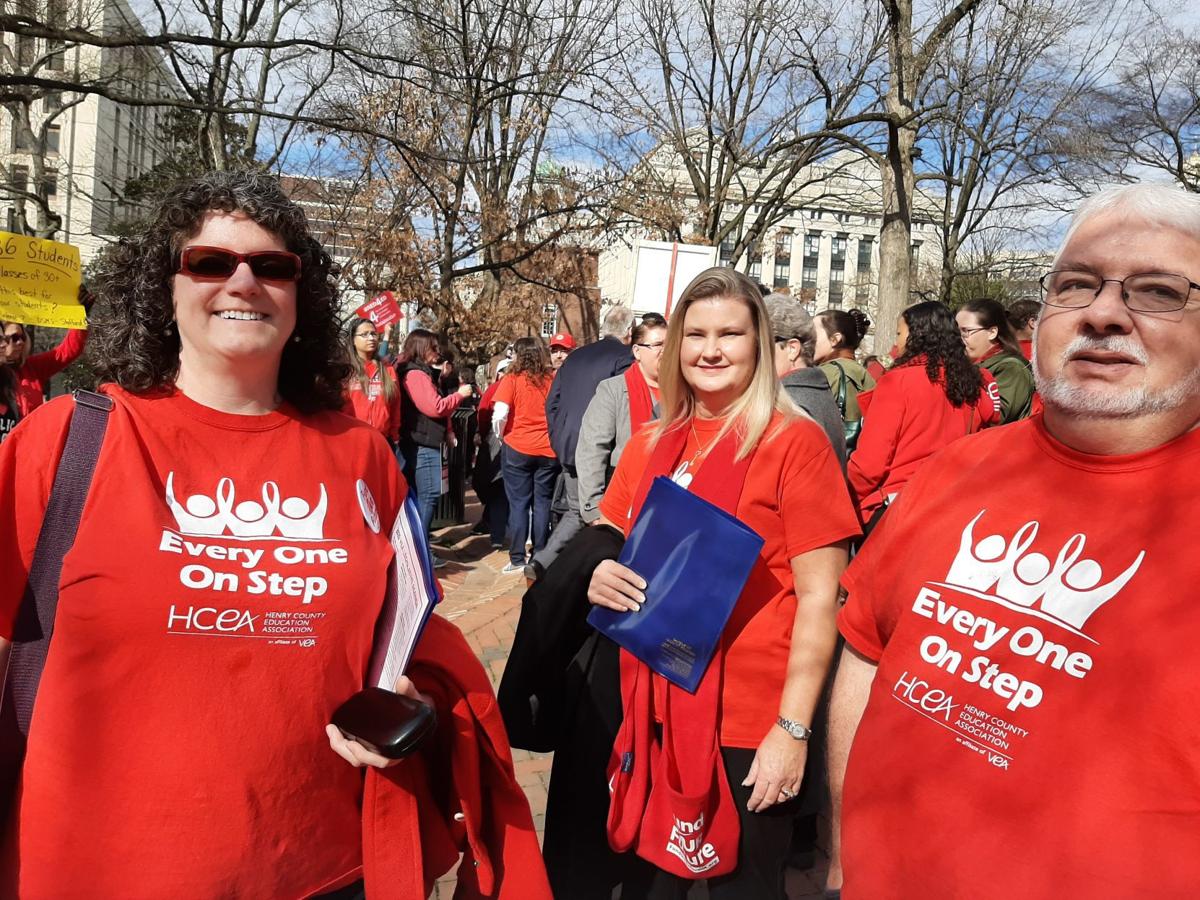 Henry County teachers Heather Byrd, Lisa Eanes, and Jerry Byrd wait for the Virginia Education Association Fund Our Future Rally to begin by the bell tower at the Capitol in Richmond on Monday. 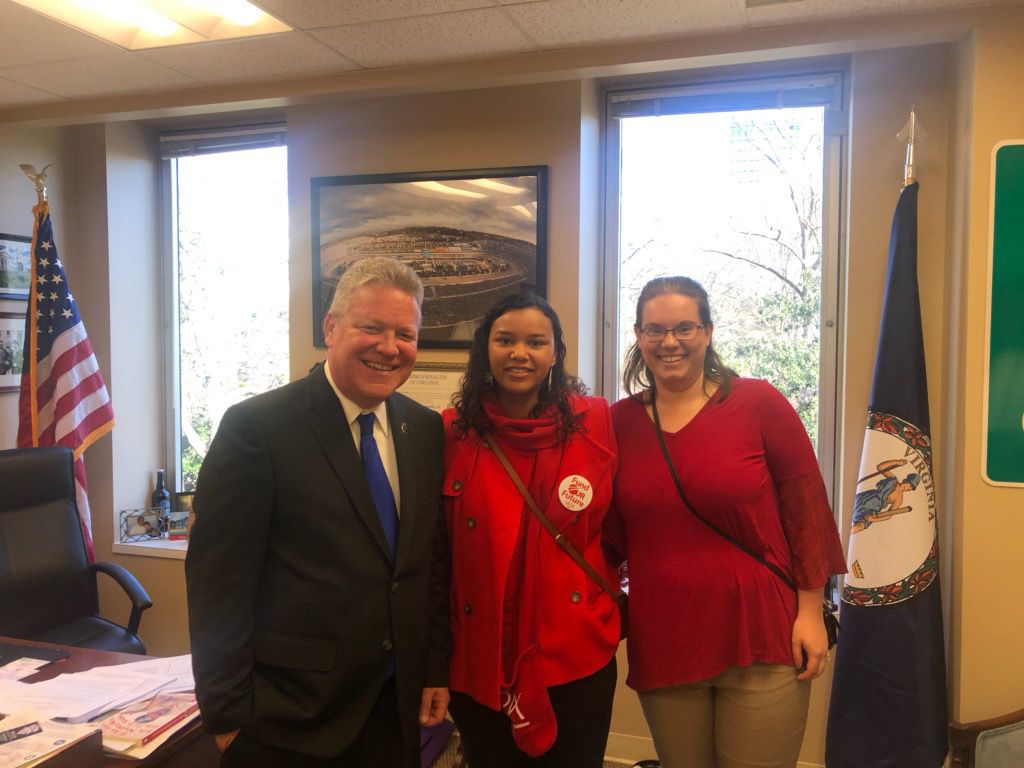 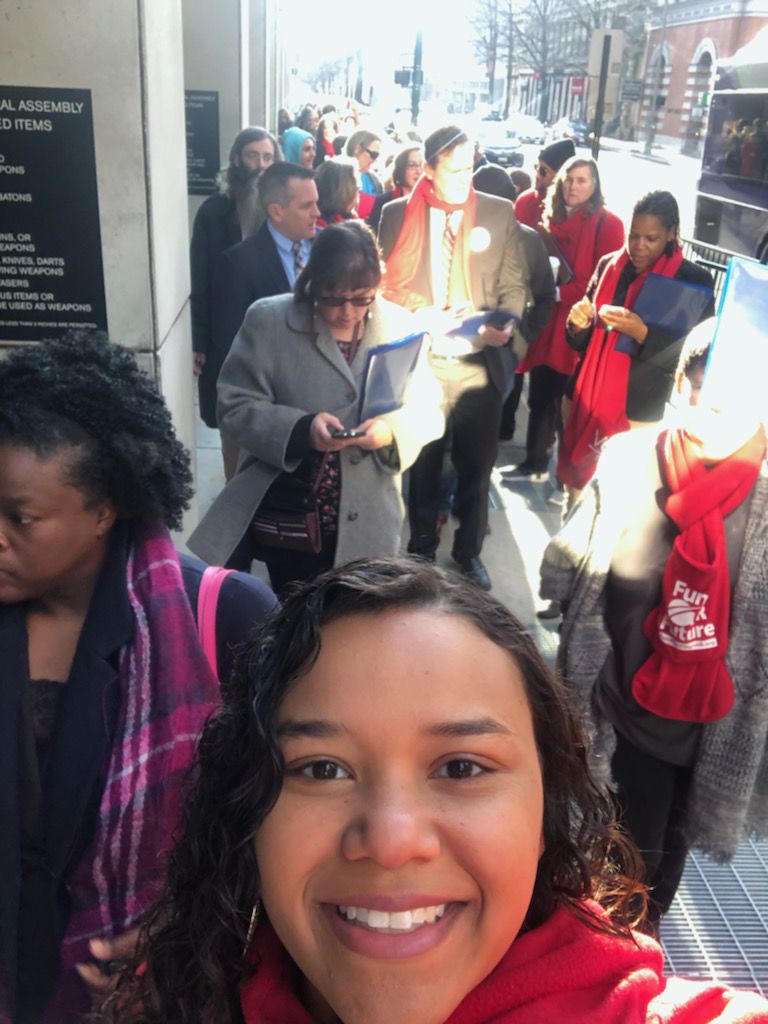 Martinsville teacher Brittany Scott took this selfie heading in to the VEA Fund Our Future Rally in Richmond on Monday. 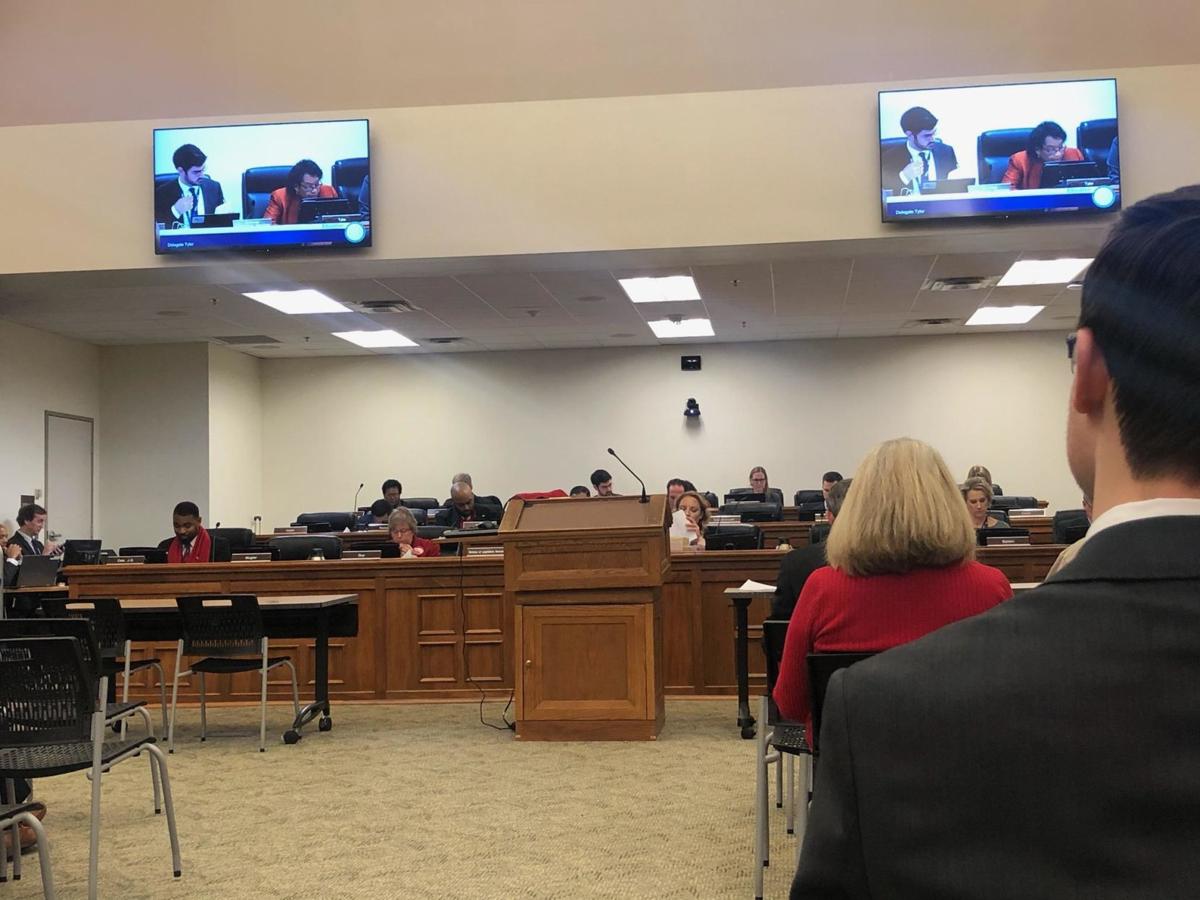 Martinsville teacher Brittany Scott sat in on part of the House Education subcommittee proceedings while in Richmond for the VEA rally. 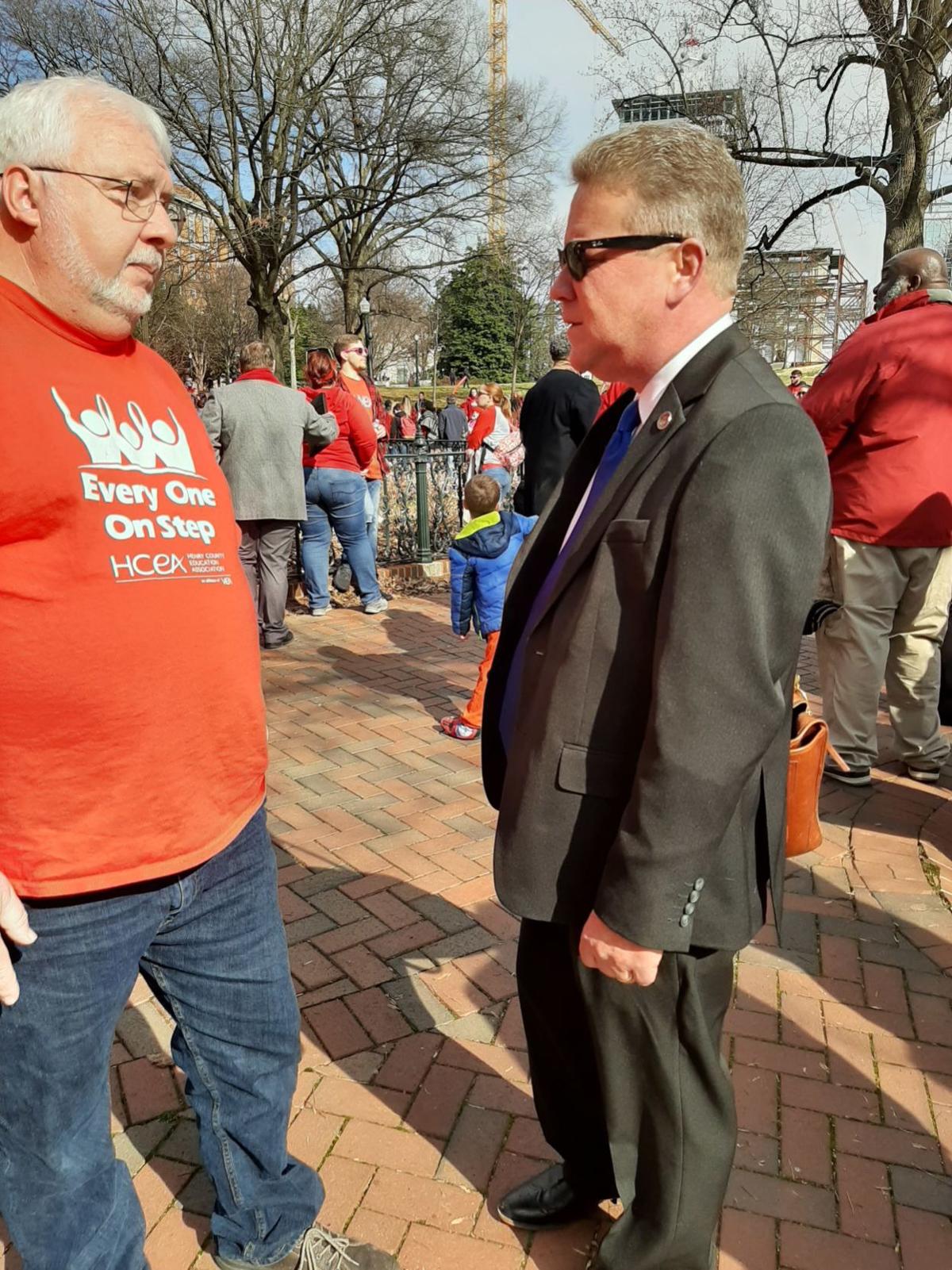 Six local teachers joined thousands from across Virginia in Richmond on Monday to rally for more public education funding.

Gov. Ralph Northam’s proposed state budget for the next two fiscal years, now in the hands of the General Assembly, includes $1.2 billion for K-12 education in Virginia. However, the Virginia Education Association says this does not go far enough to make up for funding cuts the schools sustained during the recession 10 years ago.

The six met with state Sen. Bill Stanley (R-Franklin) in his office and shared their opinions with aides for Del. Les Adams (R-Chatham) and Del. Charles Poindexter (R-Frankllin), who were unable to meet in person because of the legislative committee schedule.

Among the talking points the teachers shared were concerns that Virginia only ranks 40th in per-pupil state funding. Also, according to VEA figures, Virginia teachers currently earn $8,483 less than the national average, ranking the state 32nd in the country.

Northam’s budget would give a 3% pay raise to state-funded school employees, but it does not take effect until the second year of the biennium, which starts July 2021. Along with pay raises for teachers, the VEA supports increasing the minimum wage in Virginia to $15 an hour, “which would really benefit our bus drivers” and other school wage employees, Scott said.

The rally day was about “just getting the lawmakers to hear us and know we were standing together for public education,” Scott said. “As a whole, Virginia needs more funding for our schools.”

Carter, who is president of the Henry County Education Association, said she has attended this rally for the past several years. With Democrats in control of both the General Assembly and the governorship for the first time in many years, she said she feels this year that “there has been more support for some of the bills that we have put out.”

However, she went on, “Education is not a partisan issue. I truly believe it doesn’t matter if you’re Republican or Democrat. We should all care about funding public education.”

While Republican legislators do not always agree with the VEA’s talking points, Carter said they had “a very good conversation” with Stanley. “He’s usually good to talk to and good to give input. We don’t always agree, but he listens,” she said. “He also understands the issues with needing repairs to school buildings. Last year he championed a bill for building repair.”

This year, Stanley has sponsored three bills that would give more funding for school construction. They had been considered in the finance and appropriations committee, legislative documents show, but one of them was killed on Thursday.

Said Carter, “He does understand that a lot of our communities don’t have the money to put into capital improvements.” With Democrats in power, she added, “Maybe there’ll be a more receptive audience this year.”

Scott, who is a fourth-year teacher in Martinsville City Schools, said this is her second year participating in this rally. She also expressed optimism about the legislature’s support of education funding.

“The VEA has a lobbyist who sends out email updates daily,” Scott said. “It seems like we’re getting a lot more votes than we did in the past. Because we have a majority of Democrats who are pro-education, it seems like we’re going to get more passed this time.”

In the meeting with Stanley, Scott said some of their conversation was “let’s agree to disagree,” especially on points such as allowing teachers to engage in collective bargaining. The VEA says Virginia is one of three states that explicitly ban public-sector workers from collectively bargaining.

However, she said, “I think he’s for education. His kids go to public schools.”

In between meetings, Scott said she found herself with a little bit of free time. “I went down and sat in on the House Education subcommittee meeting,” she said.

After teaching students about the legislative process in the classroom, “it was interesting to see it actually in action. They were moving so fast, it was hard to keep track. A lot of bills passed.”

Teachers also gathered at the capital for a rally, with speakers that included former Martinsville Superintendent Scott Kizner, who now leads Stafford County Public Schools. People wore red shirts and carried signs with slogans such as “Lordy lordy, Virginia is 40,” a reference to where the state ranks in education spending nationally, Scott said.

“We had different chants we were saying, like ‘Fund our future,’ to pump the audience up,” Scott said.

In addition to urging legislators to support bills that benefit the schools, Scott said all are welcome to attend the annual VEA event in Richmond. Jan. 25, 2021, is the next rally day, she said.

“Teachers, staff, city council, parents and students are all welcome to go,” Scott said. “The more people we have come out, and the more we show that we’re standing together, I think the more the government will see that they need to do something to support public education.”

A $25,000 donation in memory of Bobby Scruggs, a long-serving NASCAR official, will endow a scholarship at P&HCC.

Henry County teachers Heather Byrd, Lisa Eanes, and Jerry Byrd wait for the Virginia Education Association Fund Our Future Rally to begin by the bell tower at the Capitol in Richmond on Monday.

Martinsville teacher Brittany Scott took this selfie heading in to the VEA Fund Our Future Rally in Richmond on Monday.

Martinsville teacher Brittany Scott sat in on part of the House Education subcommittee proceedings while in Richmond for the VEA rally.