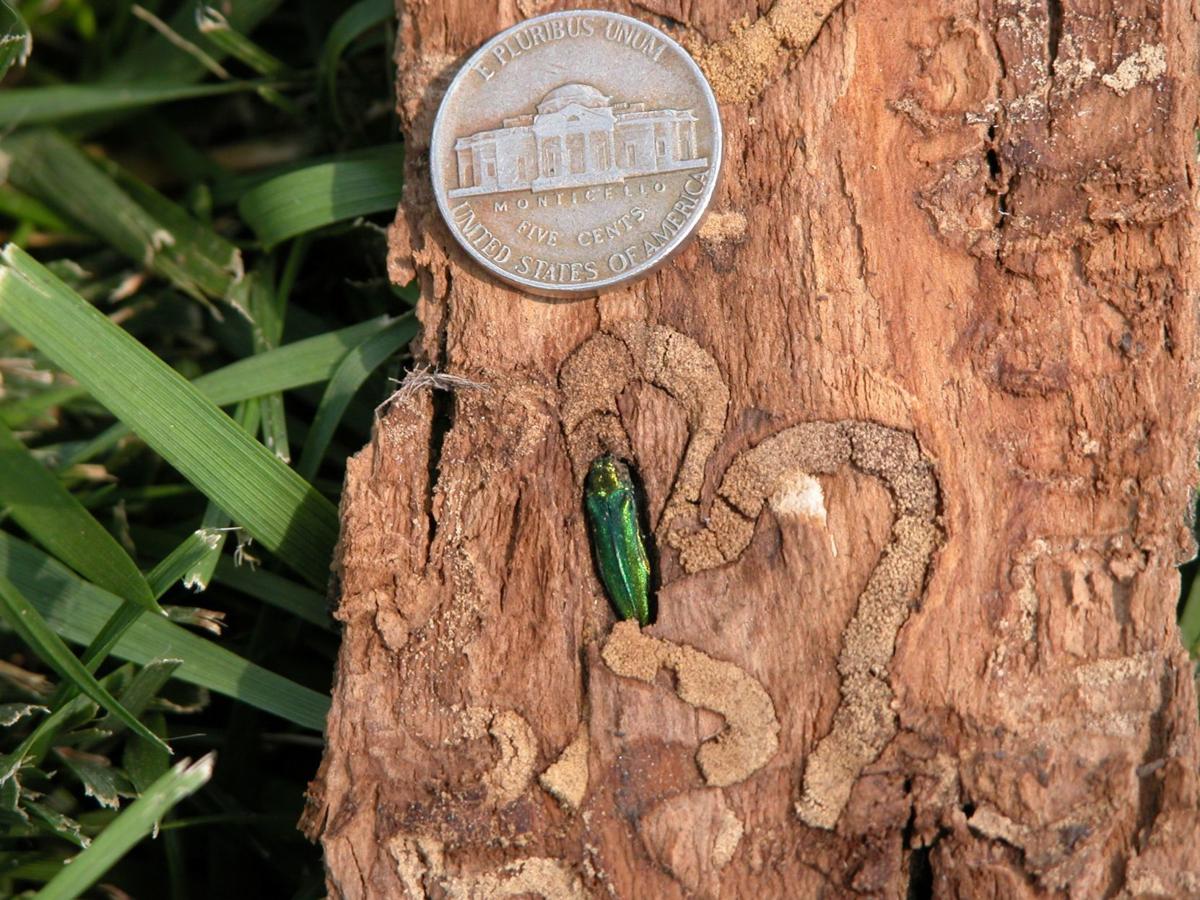 The emerald ash borer, an infestation of which can kill an ash tree in 2 years, has been found in 88 Virginia counties -- locally, in 2017. 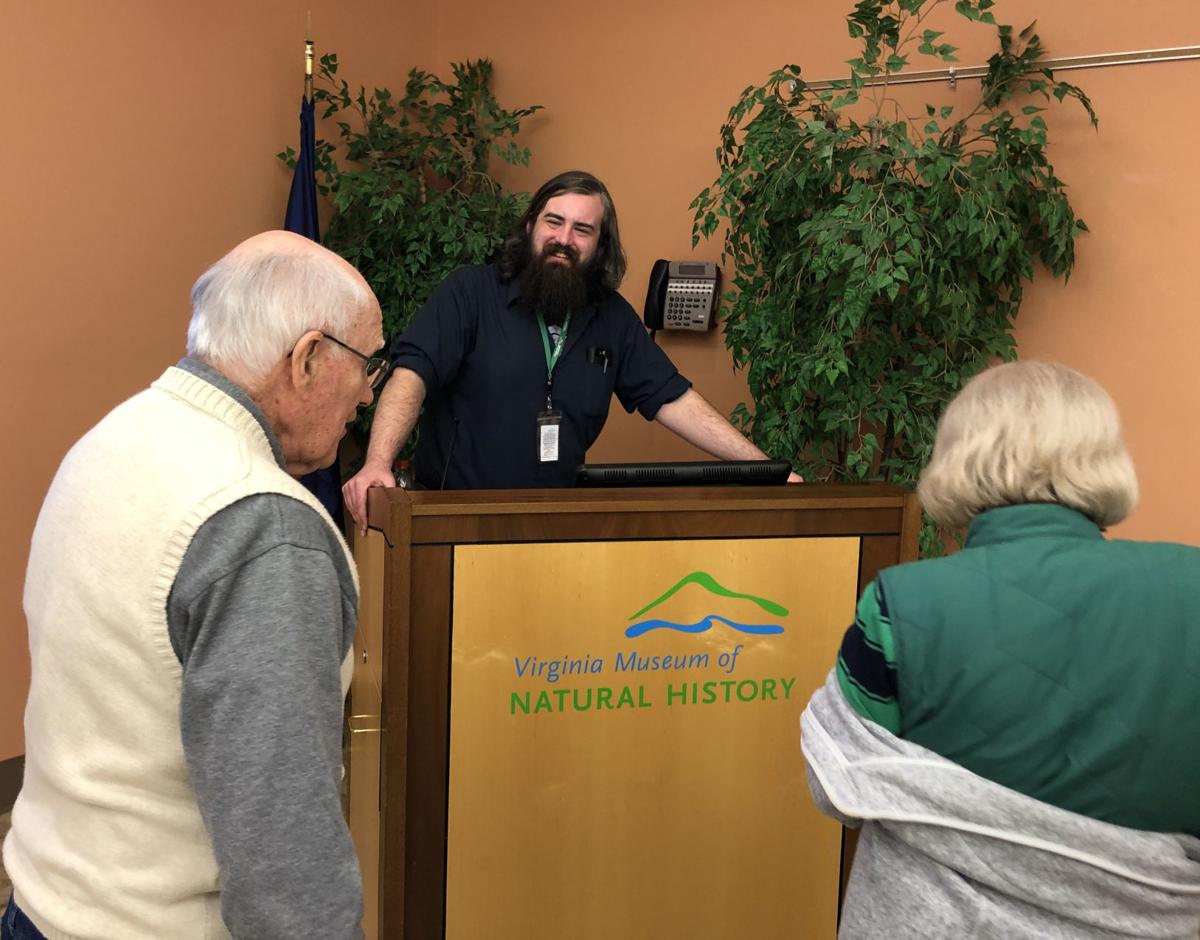 Virginia Museum of Natural History Science Administrator Ben Williams talks with people from the audience at the end of his program about invasive species. 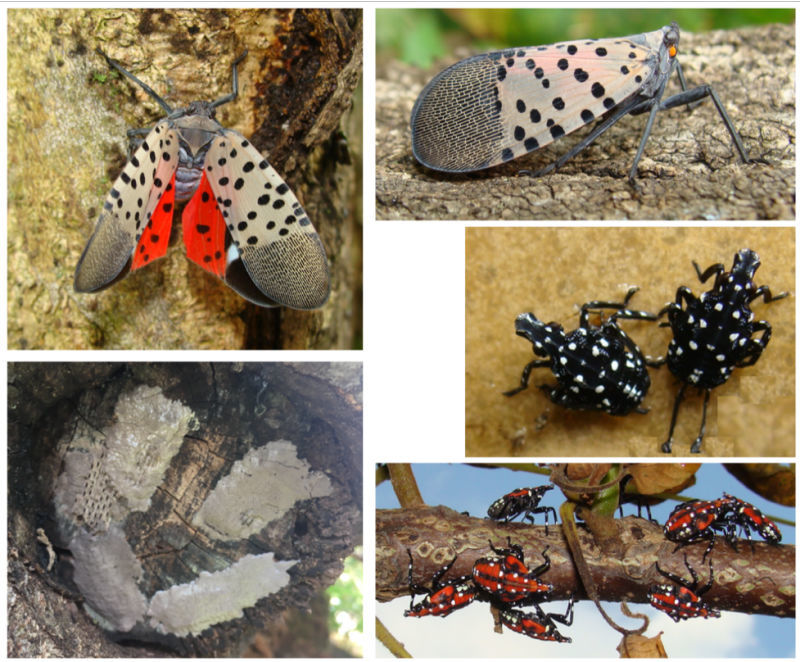 The spotted lanternfly has been spotted in Northern Virginia. The Virginia Cooperative Extension is on the lookout for it, because it destroys fruit crops. 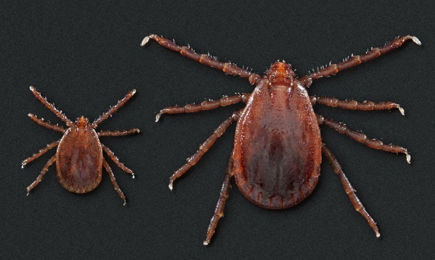 The Asian Longhorn Tick was first spotted in the US in 2017.

The fight is on against the emerald ash borer — enough that the Virginia Department of Forestry has hired a coordinator to lead the charge.

But the emerald ash borer is just one of the invasive species that are wreaking havoc on the environment that Virginia Museum of Natural History Administrator of Science Ben Williams discussed in a recent program.

“So far, emerald ash borers have killed tens of thousands of ash trees, and they threaten to kill most of the 8.7 billion ash trees in North America,” Williams said.

A native of Asia, the emerald ash borer first was seen in the U.S. in 2002, in some imported packing materials in Michigan. In 2018 it reached Martinsville and the counties of Henry and Patrick, and by now it has been confirmed in 88 counties of Virginia, according to the Department of Forestry.

Adult emerald ash borers lay their eggs in crevices and cracks on the bark of ash trees, and when the eggs hatch, the beetle grubs bore through the bark and eat the tree’s xylem, which is part of the trunk that transports water up the tree. They dig small galleries before they chew a new hole through the bark to emerge as full-grown beetles.

An early sign of an infestation is cracks in high branches, followed by canopy dieback, according to the Virginia Cooperative Extension Office Publication “Emerald Ash Borer” by Eric R. Day and Scott Salom. Eventually, the tree starts to thin out, and top branches begin to die.

Other signs of an infestation are shoots at the base of the trunk; woodpecker damage (flecking) indicating the birds looking for the borers; D-shaped exit holes; and S-shaped larval galleries.

Climate does not limit the spread of the beetles, which can live in temperatures ranging from 36 degrees below zero to 127 degrees Fahrenheit, Williams said.

However, “it’s not all doom and gloom,” Virginia Cooperative Extension Forester Jason Fisher said. “Ash is not going to become extinct.”

Plus, he added, ash trees make up only 2.5% of all trees in Virginia.

Yet once a tree has been hit, it will be dead in about two years, Fisher said. Because of that, the VCE is “telling the public now: If you own timber and have acres and acres, there really is no remedy or prevention for EAB. You can’t treat every tree in the forest, plus environmentally it would not be responsible. If timber harvesting is in your plan — if you have ash and don’t want to lose them — you need to harvest them.”

Martinsville-Henry County Virginia Cooperative Extension Agent Melanie Barrow said a tract of more than 800 acres in Brosville was logged this past summer just because the EAB “had destroyed every one of” the ash trees on it.

In urban areas, “if you’re not going to treat the tree, the tree needs to be removed. When ash starts dying, it gets real brittle. The breakage is bad,” Fisher said.

On the bright side, there are products that work to prevent tree damage by the EAB, he said. Roughly speaking, treating a single tree as big around as a 5-gallon bucket costs about $100 per year.

The state is taking measures with biological control, with the release of tiny parasitic wasps (not the kind that sting). They have been released west of Patrick County, “but close enough to have an impact,” Fisher said.

Additionally, “woodpeckers are having a ball. They eat and kill up to 40% of EAB larvae.”

Fisher said he welcomes questions, including about how to save your ash trees; he can be reached at 434-476-2147 and jasonf@vt.edu .

For more information, look up “Virginia Department of Forestry – Forest Health; Emerald Ash Borer” online. Meredith Bean, the EAB coordinator, can be reached at 434-220-9034 and meredith.bean@dof.virginia.gov.

Williams said the VMNH does not have any emerald ash borers in its collections but would like some. He asked that anyone who finds one bring it to the museum.

Melanie Barrow and Travis Bunn, the VCE agent for Patrick County, both said the Spotted Lanternfly is a concern. It’s not here yet, they said, but it has been spotted in Northern Virginia.

“We’re really watching,” Barrow said. “We thought it would be great — that it attacks Ailanthus, the tree of heaven, but it also damages grapes and other commercial commodities.”

“The SL [Spotted Lanternfly] is particularly of interest to our fruit growers, while the ATL [Asian Longhorned Tick] is of particular concern to everyone,” Bunn said. The ALT gets on livestock, poultry, wildlife and people.

The Centers for Disease Control reports that the ALT first was found in the U.S. in 2017. The female ticks can lay eggs and reproduce without mating.

“Both of these invasives are masters at camouflaging themselves, which makes it increasingly difficult to detect,” Bunn said.

Williams also talked about other invasive species in his program, “Place Invaders: Invasive Species and the Dangers They Pose.” They included:

» Kudzu, known as “the vine that ate the south.” Kudzu was introduced to the U.S. at the Centennial Exposition in Philadelphia in 1876. “It was billed as a high-protein cattle fodder, an ornamental to provide shade over your porch and a solution for erosion,” Williams said. In the first half of the 20th century, the Soil Conservation Service distributed 85 million kudzu seedlings and paid famers $19.25 per hectare to plant kudzu, he added. Kudzu can grow by up to a foot a day, and it spreads by about 120,000 acres a year, destroying anything in its path.

» Brown marmorated stink bugs, native to Southeast Asia and first discovered in the U.S. in 1998 in Pennsylvania. They feed “on everything,” destroying crops, he said. “The terrible smell that stink bugs release, which has prevented me from ever enjoying cilantro again, is a combination of two aldehydes … actually used in the food industry.” One is supposed to smell like “waxy oranges,” and the other is supposed to have a nutty flavor and smell like cucumbers, he said. The compounds deter predators but also have anti-fungal and anti-bacterial effects. The samurai wasp, also native to Southeast Asia, have been brought in to control the stink bugs. They are thought not to target the other types of stink bugs that are native to the U.S.

» The northern snakehead, native to China, Russia and the Koreas. These resilient freshwater fish can breathe air and live outside water for several days. They first were seen in the U.S. in 2002, and “there is particular concern that snakeheads will eventually wind up in the Great Lakes, and because they both eat and outcompete our native fish, that would be an absolute disaster,” Williams said.

» The European starling, which was introduced by the president of the American Acclimatization Society, a “group founded in 1871 with the goal of introducing ‘superior’ European animals and plants into North America,” Williams said. The 200 million European starlings in North America, all descended from the 60 birds the society’s president let loose in New York.

» Sebra and quagga mussels, which threaten the ecology of the Great Lakes and other lakes. Since they arrived in the 1980s, they outcompete native species for food and clog up the works at water treatment and power plants. “It is believed that the cost of mussel management in the Great Lakes is as high as half a billion dollars per year,” Williams said.

Williams also looked beyond the U.S. to Australia, the environment of which is being destroyed by the cane toad, which is from Central and South America.

Cane toads can get up to 9½ inches long and live for 10 to 15 years in the wild. Females lay between 8,000 to 25,000 eggs at a time, and the tadpoles hatch in two days and can survive even brackish water.

At most of their stages of life, cane toads are toxic: If an animal (or person) bites the toad, poison from the glad behind both eyes stops a heart from functioning properly.

Cane toads can eat rodents, reptiles, bats, plants, garbage and more. It’s estimated that there are more than 200 million cane toads in Australia, and they are ruining populations of native creatures, such as northern quolls, monitor lizards, snakes and birds.

Cane toads were introduced into Australia from Hawaii in 1935 in efforts to control the sugar cane beetle, which was ruining sugar cane crops. However, the cane toads couldn’t reach the adult beetles that lived in the high leaves, nor the beetle grubs that reached underground — so they went after any other kind of food.

The emerald ash borer, an infestation of which can kill an ash tree in 2 years, has been found in 88 Virginia counties -- locally, in 2017.

Virginia Museum of Natural History Science Administrator Ben Williams talks with people from the audience at the end of his program about invasive species.

The spotted lanternfly has been spotted in Northern Virginia. The Virginia Cooperative Extension is on the lookout for it, because it destroys fruit crops.

The Asian Longhorn Tick was first spotted in the US in 2017.