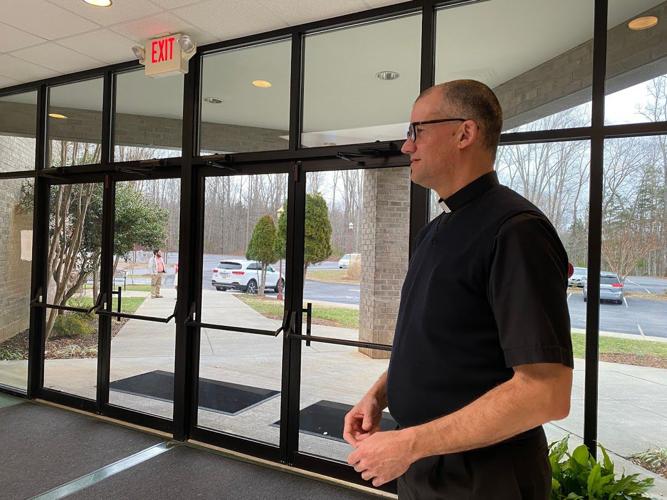 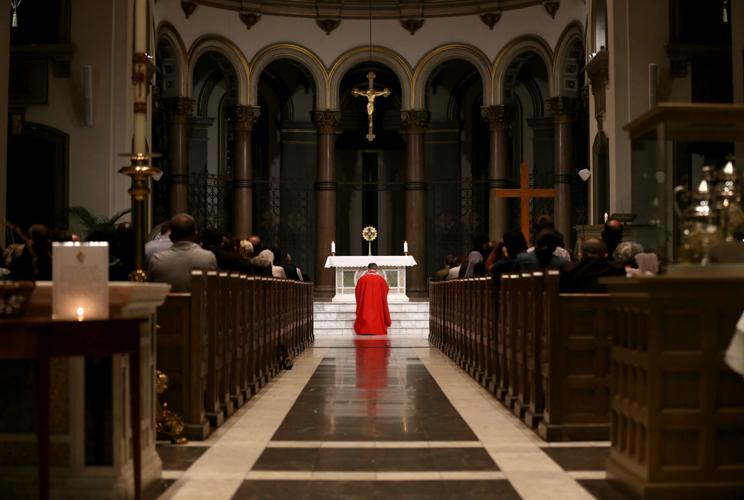 Bishop Barry C. Knestout kneels during the Mass of Atonement at Cathedral of the Sacred Heart on Friday Sept. 14, 2018.

On Monday night, after Bishop of the Diocese of Richmond Barry Knestout had notified him and his parishioners in an emailed letter that White had been removed as pastor of St. Joseph Catholic Church in Martinsville and St. Francis of Assisi in Rocky Mount, White said he would remain as priest and is seeking legal counsel to defend his right to do so.

White and Knestout have had a monthslong dispute about a popular blog White writes that sometimes includes strong criticism of how the Catholic church has handled cases about sex abuse by priests.

Knestout said in the letter that White would be reassigned as “chaplain to various prisons, state and federal, within the diocesan bounds” effective immediately and would be leaving the area within the week.

“I don’t intend to go anywhere until the canonical process has run its full course,” White said Monday evening. “As a sitting pastor, I have the right to recourse before being removed.”

J.D. Flynn is the editor in chief for the Catholic News Agency, and Ed Condon is its Washington editor. Both are canon lawyers and wrote a joint article that relates to White’s case.

A bishop cannot remove or transfer a pastor “without following a detailed and nonnegotiable process defined by cannon law,” they wrote.” This procedure can only be initiated if a priest has met one or more conditions for removal outlined in that law.”

Those conditions include actions deemed “gravely detrimental or disturbing” and if met, the bishop must consult with a priests’ council where the pastor is allowed to see the evidence against him and make a defense.

“During this whole process, the bishop can neither remove the pastor nor appoint a replacement,” the article said.

Bishop Knestout said in his letter on Monday that Father Kevin Segerblom, pastor of St. Andrew’s Catholic Church in Roanoke Episcopal Vicar for the Western Vicariate, would be White’s immediate replacement “until such time as a new pastor can be named.”

White’s blog has been seen by more than 1 million. Late last year, Knestout threatened to remove White unless he took down the blog and refrained from communicating publicly online.

White complied, but when the coronavirus pandemic hit, he asked for Knestout’s permission to resume his blog.

Knestout ignored the request, so White decided to go against the order and resume publishing his posts online.

Within hours of receiving the emailed letter from Knestout, White was on his blog with a video of himself reading a letter he had penned in response.

“I regret the wording that the bishop used in his letter to you of earlier today,” White said. “In the church, we have the norm of law. According to the legal norms, I enjoy the right to take recourse against the bishop’s decision.

“I have a canon lawyer, and he is helping me deal with this situation in the proper legal way.

“In the meantime … I remain your pastor until the full legal procedure has run its course.”

Flynn and Condon wrote that if a bishop removed a priest in violation of canon law procedure and the priest appealed to Rome, “it is likely the Vatican would order the pastor to be reinstated.”

“You are handling this situation very poorly,” Piazza wrote. “The souls of your parishioners are under your care and I fear your current actions will cause many to turn away from God and His church, and that is a grave sin for you to bear.”

“The only actions that may cause people to turn away from God and His church are those of this bishop,” Rogers wrote. “I will not pretend for the sake of ‘peace’ that I think what the bishop is doing is morally right.”

White said in his video post on Monday that he had planned some time ago to be away the next few days, and his schedule would not change.

“I will spend the next few days in quiet reflection,” White said. “Then I intend to celebrate the upcoming Easter-season Masses with you, as planned.”

Bishop Barry C. Knestout kneels during the Mass of Atonement at Cathedral of the Sacred Heart on Friday Sept. 14, 2018.