February is now the deadliest month of the pandemic in the West Piedmont Health District.

COVID-19 has claimed eight more residents – four each in Henry County and Martinsville – and 45 this month, three more than the record set in January.

That’s also the second-highest single-data total for deaths in the district, with the record 10 being hit twice (on Jan. 28 and Sept. 15).

Reasons for the deadly spike? Officials say it’s both following the post-holiday surge in cases from January and the continual data updates as records are checked.

The Virginia Department of Health included these deaths in its data report from Tuesday morning for information collected by 5 p.m. Monday, but deaths could’ve occurred just about any time.

VDH clears cause through death certificates, and backlogs could take weeks to catch up. In fact, officials say continued search of vital records has linked more deaths to the virus. We only know for sure that VDH tracks all data by a person’s place of residence.

“These reported deaths were identified as a result of the ongoing review of Vital Records death certificate data by VDH central office,” District Epidemiologist Sharon Ortiz-Garcia said in an email forwarded by spokesperson Nancy Bell.

But she also said that, “Yes, most associated with the surge of cases in January.”

There were a record 2,723 cases in the district last month, and although the case count has slowed to its lowest point in months – there were 30 reported Tuesday – the death toll now has climbed to 220, with now 92 of those victims from Henry County and 50 from Martinsville

We know scant info about those eight deaths, but we can tell you that one of them was between the ages of 40 and 49 years old, only the eighth victim in that age bracket.

Six of them were men and two women. Five were white, one was Black and one race was reported as “Other,” which means also not either Asian or Latino.

An automatic question relative to this surge is the impact of the three ongoing outbreaks at long-term-care facilities in Martinsville and Henry County.

Responding to a question about Mulberry Creek Nursing & Rehab, where 11 people had been reported dead as of Friday, Ortiz-Garcia said that “one more for this specific facility who has five or more reported deaths associated with COVID-19.”

That means she wasn’t talking about outbreaks at Martinsville Health & Rehab and the King’s Grant Retirement Facility in Henry County. Each has had deaths, but VDH does not disclose how many until the figure has reached five.

“Health departments are not authorized to disclose the number of deaths that are 5 or less,” Ortiz-Garcia said.

There are 225 cases associated with those three outbreaks as of Friday, with 151 of them from Mulberry Creek, 39 from King’s Grant and 35 for Martinsville Health & Rehab.

Tuesday’s overall data report from VDH was a particularly bad one for Henry County. In addition to four deaths, the county had 22 new cases and three more hospitalizations.

That was the majority of 30 new cases in the district, where the rolling 7-day average is down to 22 and 16 per 100,000 population (dramatic decreases from January’s record highs).

Martinsville had five new cases, and Franklin County had four. Patrick County’s total actually decreased by one, which sometimes happens in statistical review.

The positivity rate among tests in the district – a forerunner of surges and outbreaks – has declined to 8.4%, which is barely higher than the state average (8.3%), on 59,000-plus tests.

Ashleigh Pritchard was featured for her oil work of people's animals.

PATHS' new mobile unit will take vaccinations on the road.

The unit will travel around the region to provide COVID-19 vaccines to people who have difficulty getting access.

Dewey and Juanita Shelton both survived COVID-19 and have pre-existing medical conditions. They want to be vaccinated. Their patience is being tested. 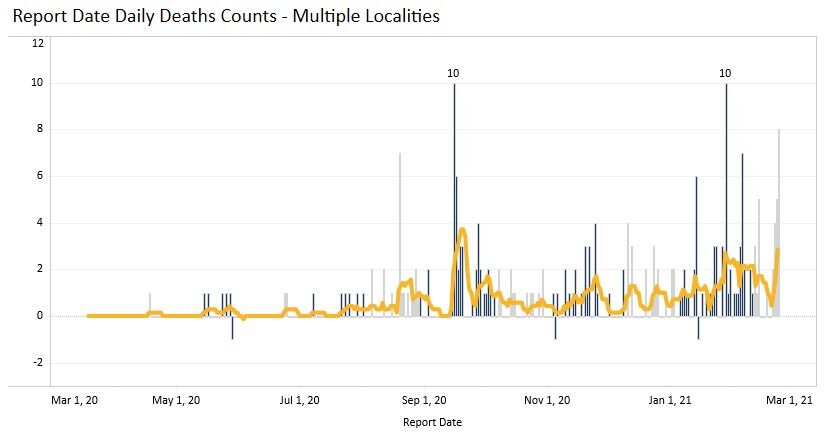 How the daily death rates have rolled in West Piedmont Health District. 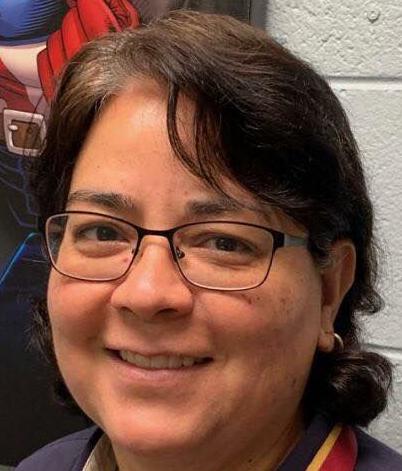