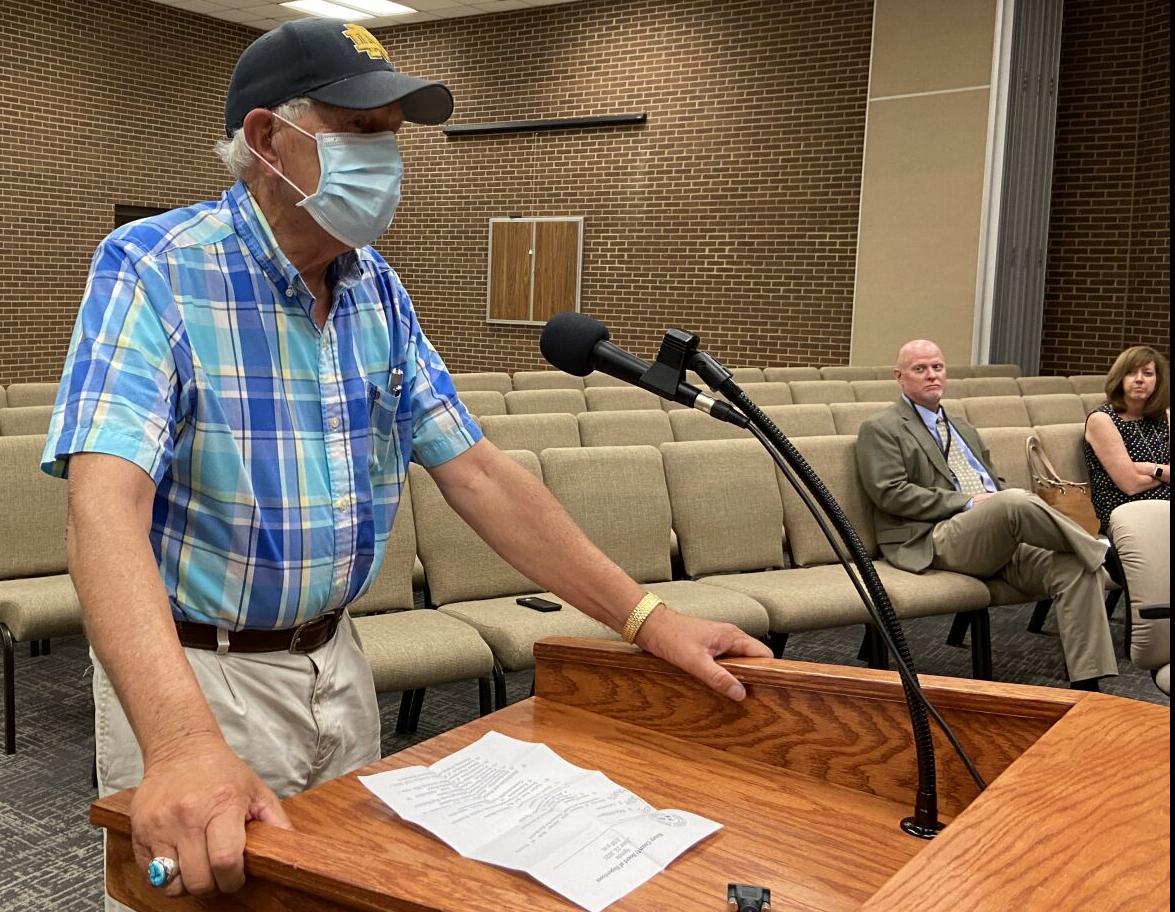 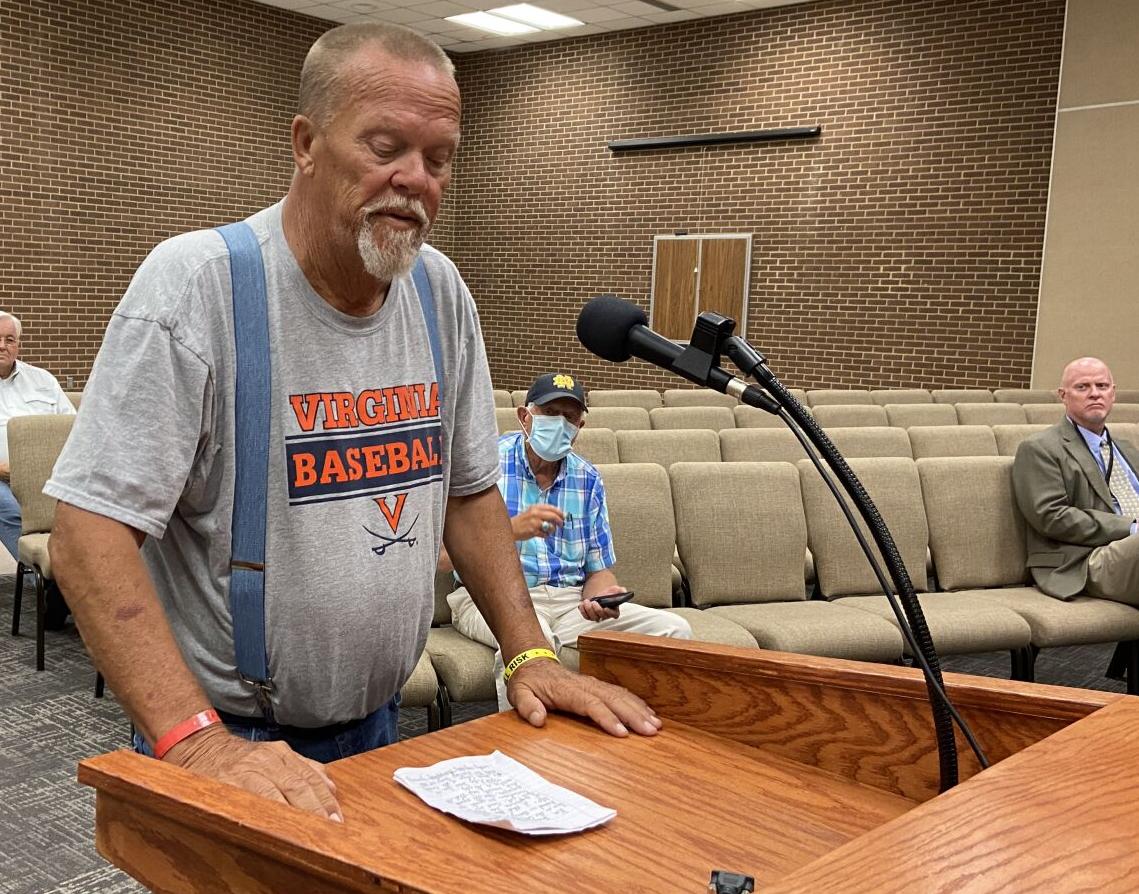 Collinsville District resident Tommy Wyatt reads from prepared remarks during meeting of the Henry County Board of Supervisors.

Two residents of the Collinsville district complained Tuesday night at a regular meeting of the Henry County Board of Supervisors about bonuses for the school board, real estate taxes and reversion as the six members on the board sat in silence and listened.

“These bonuses our elected school board voted to give themselves, I don’t agree with elected officials getting bonuses, and some are already getting free health insurance,” Doug Stegall said. “How do we know what they [school board members] do when we don’t know how many hours they are working?”

At a meeting last month the Henry County School Board asked the Board of Supervisors for permission to shuffle some money around in order to pay cafeteria workers a $1,400 bonus for working through the pandemic.

Iriswood District Supervisor David Martin, who is also a former Henry County school superintendent, pointed out that the $1.8 million transfer was split among three accounts and would provide a bonus to “all eligible full-time and part-time employees.”

Martin questioned if school board members should be qualified to receive the bonus when they had already been paid a $1,000 bonus in the same year. A Henry County school board member is not only an elected official but also considered an employee of the school system.

The request was approved with Martin’s vote because the request had to be voted either up or down and could not be amended.

“I’m voting for it because of the other employees [who deserve the bonus],” Martin said at the meeting.

Tommy Wyatt, also a resident of the Collinsville District, had complained directly to the school board at a recent meeting about including themselves for the additional bonus money and made that same complaint known to the Board of Supervisors on Tuesday night and took it into another hot topic — reversion.

“I am the new poor person,” Wyatt said. “Why can’t we get a break on our real estate tax?

“I’m worried about those 10 years that are going to go by fast on the reversion.”

He referred to 10 years because that was the time period stipulated in a memorandum of understanding approved last month by supervisors and the Martinsville City Council to allow the city to revert to a town in Henry County.

City Council agreed that, if Henry County would approve the MOU, Martinsville would forfeit its right to annex property for 10 years after reversion went into effect.

“With reversion, the taxpayers didn’t have any say on that,” Stegall said. “It’s going to get harder and harder on taxpayers to pay their bills in the future.”

Both Stegall and Wyatt are represented by Collinsville District Supervisor Joe Bryant, who has scheduled what he describes as a town hall meeting with himself, Deputy County Administrator Dale Wagoner, Sheriff Lane Perry, VDOT Resident Engineer Lisa Hughes and County Attorney George Lyle for an opportunity to “come and meet your local officials to ask questions and/or learn about issues affecting your neighborhood,” an advertisement in the Martinsville Bulletin reads.

That meeting is scheduled for 7 p.m. Thursday in the Summerlin Meeting Room of the Henry County Administration Building, the same room where the Board of Supervisors meetings are held. It’s unclear why Bryant’s fellow supervisors aren’t scheduled to attend.

“I was kind of shocked to see Joe holding a town hall meeting at re-election time with county officials as special speakers,” said Andrew Palmer, who is running against Bryant in November. “Are they endorsing Joe Bryant for re-election?

“One of the biggest comments I have received from Collinsville taxpayers [is] they feel like their voice is not being heard and the officials such as the county administrator are making all of the decisions and not the supervisors, and I would say with Joe holding this town meeting with them present, that is true.”

Federal law prohibits public facilities, funds and time to be used for a campaign by a government official.

Del. Danny Marshall (R-Danville) and Sen. Bill Stanley (R-Moneta) have filed companion bills in the House and Senate that would put the issue …

Martinsville residents and businesses have been affected more frequently recently by power outages and to make matters worse, the system in us…

Drug recovery facility in Bassett gets approval from BZA

Plans to convert an elegant two-story home in Bassett into a halfway house for women were approved Thursday morning by the Henry County Board of Zoning Appeals.

Meeting agendas: Henry County Board of Supervisors and Board of Zoning Appeals; Martinsville on reversion

Henry County Board of Zoning Appeals

Yacht squeezes under bridge with less than 5 inches of clearance

Powering your home or business with green energy

Powering your home or business with green energy

This sea toad has fins that act like feet

This sea toad has fins that act like feet

Car tires recycled as mobile shelters for cats in Cairo

Car tires recycled as mobile shelters for cats in Cairo

Collinsville District resident Tommy Wyatt reads from prepared remarks during meeting of the Henry County Board of Supervisors.