The reversion process has hit a snag.

The lack of a vote effectively tabled the matter, allowing the board the possibility of reviving it at a later time.

“Following the public hearing the chairman solicited a motion to adopt the ordinance and there was no motion,” said County Attorney George Lyle by email. “I believe the chairman said the matter was ‘tabled’ for the time being, which means there was no action taken.”

But Lyle said that doesn’t mean the board can’t vote for it at a future meeting.

“The matter can be considered at a subsequent meeting,” said Lyle. “The next scheduled meeting of the board is Dec. 14. No agenda has been set for that meeting at this time.”

Asked about the procedure for possibly voting on the ordinance at a future meeting, Chairman Jim Adams said it would first take a consensus of the board members to request that it be added, and he didn’t expect that to happen.

“You heard what was said here tonight,” Adams said. “I’m not an expert on Robert’s Rules of Order, but I don’t see that happening.”

At the meeting, all board members spoke about Martinsville reverting from a city to a town in Henry County but subsequently failed to respond to a request from Adams for a motion to approve the ordinance.

“My big concern: There is no way we can merge schools in a year and a half,” said Ridgeway District Supervisor Ryan Zehr. “It’s a lot to take in.”

Iriswood District Supervisor David Martin did not seek re-election, and unless a special meeting is called, Dec. 14 will be his last meeting on the board.

“I never thought that five individuals could take a vote and change the course of history for an entire community,” said Martin, speaking of the five city council members who voted unanimously almost two years ago to pursue reversion. “This process ... was not a collaborative process.”

Collinsville District Supervisor Joe Bryant had voted against the approval of the agreement that was presented to the Commission on Local Government (COLG) in August and approved by the commission in September.

“It’s not all about reversion; it’s about annexation,” said Bryant. “I don’t think it’s fair for a city to come in and take over property in the county.”

Horsepasture District Supervisor Debra Buchanan also voted with Bryant against approval of the agreement that went before the COLG in September.

“Five city council people not allowing the community to vote on this is wrong,” said Buchanan. “There are good professional people that will lose their jobs. It’s a process that’s not fair.”

Said Reed Creek District Supervisor T.J. “Tommy” Slaughter: “Do we fight and spend a lot of money or do we try to get the best we can and go for it? I”m not for it, but I know it’s going to have to happen.”

Adams was the last to speak, and he said reversion was a “tremendously unfair deal” and the “county had little or no input.”

“But if we vote against this we will lose everything we’ve negotiated,” Adams said.

“What is the desire of this board: Is there any motion?” Adams asked, three times.

After a brief silence, Adams said: “This matter is tabled for lack of a motion.”

After the meeting, the Bulletin asked for a comment from city officials. Mayor Kathy Lawson and City Attorney and Assistant City Manager Eric Monday were out of the office for the Thanksgiving holidays, but City Manager Leon Towarnicki relayed a brief comment from Lawson and added both he and Monday agreed with the statement.

“Of course I am very disappointed that the board of supervisors chose not to vote as had been given the indication from their prior meeting,” Towarnicki’s relay of Lawson’s comment stated. “While I cannot personally speak for all the members of council, I believe reversion is the right path for our community.”

Council member Danny Turner said they had been told by their reversion legal team that the county was permitted to take up to 180 days to vote on the ordinance.

“I don’t blame the county at all. They’ve got 180 days, so I guess they’ve got about 140 left before they have to make a decision,” Turner said. “The General Assembly will have gotten their business done, so Henry County, I guess, is seizing the opportunity to go to the General Assembly and try and get better terms.”

Four people spoke at the public hearing on the ordinance Tuesday night, and among them was Eric Phillips, who campaigned unsuccessfully for Martin’s seat representing the Iriswood District.

“Delegate Danny Marshall and [State Senator Bill] Stanley could bring up new legislation allowing people to have a voice,” Phillips told the board. “There is also the opportunity for the city to have candidates [to run in November] who are opposed to it.”

Asked what the county intends to do next and whether consideration would be given to mount a legal fight against reversion, Lyle wouldn’t say.

“I cannot discuss legal strategies of the county, but the last vote of the board in this matter was to pursue the voluntary settlement agreement in August,” said Lyle. “The county continues to believe the best implementation date of any reversion would be July 1, 2024.”

The city had requested an effective date of July 1, 2023.

Regardless of what course the county takes, current law provides for Martinsville to pursue reversion with or without an agreement with the county.

In other matters, the board: 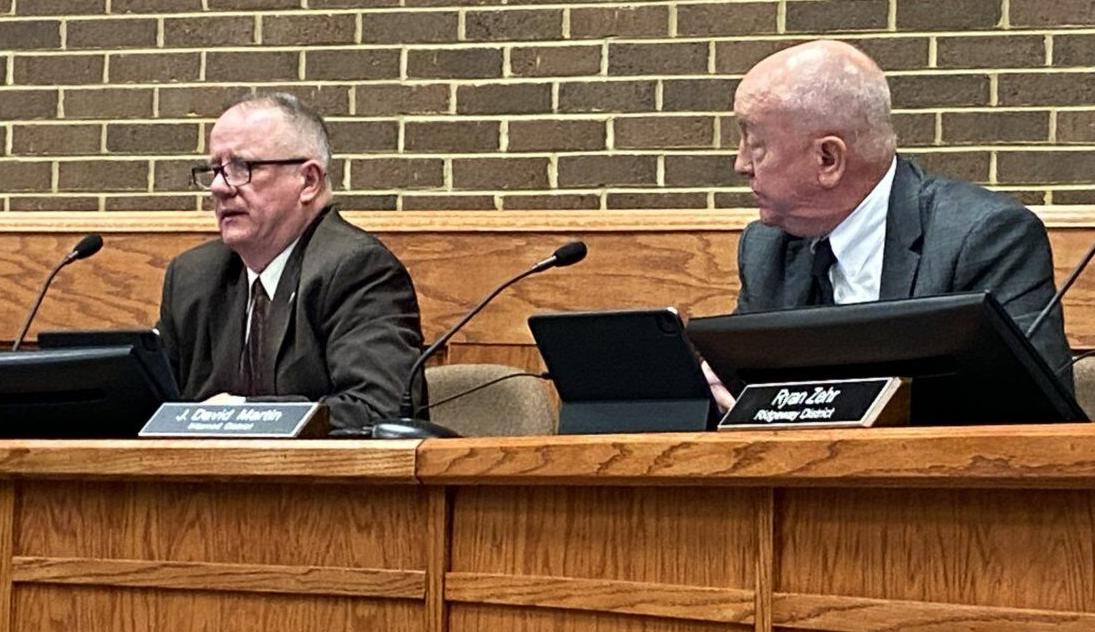 Board members Joe Bryant (left) and David Martin talk about the reversion process.

Henry County Board of Supervisors fail to approve reversion ordinance. 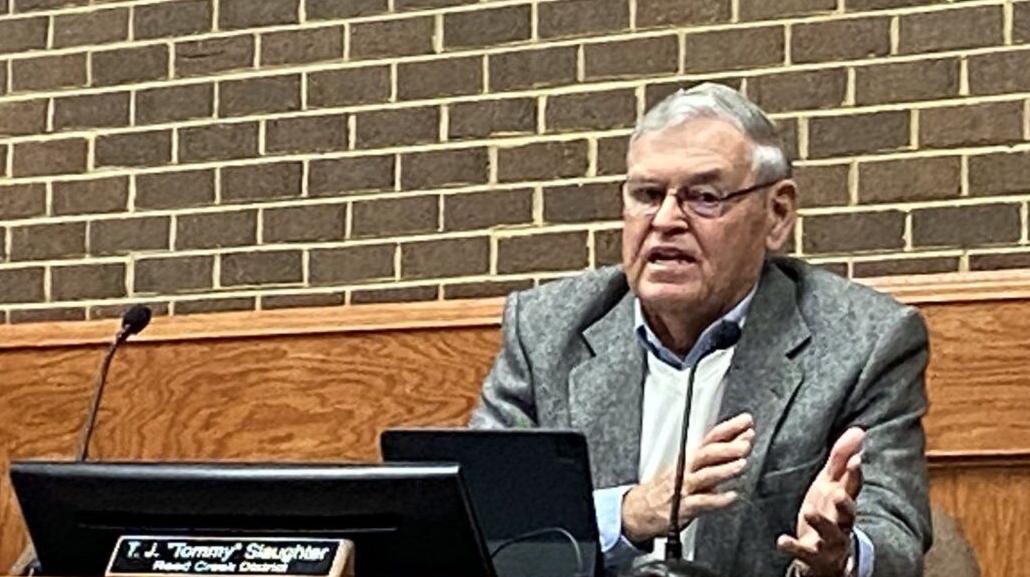 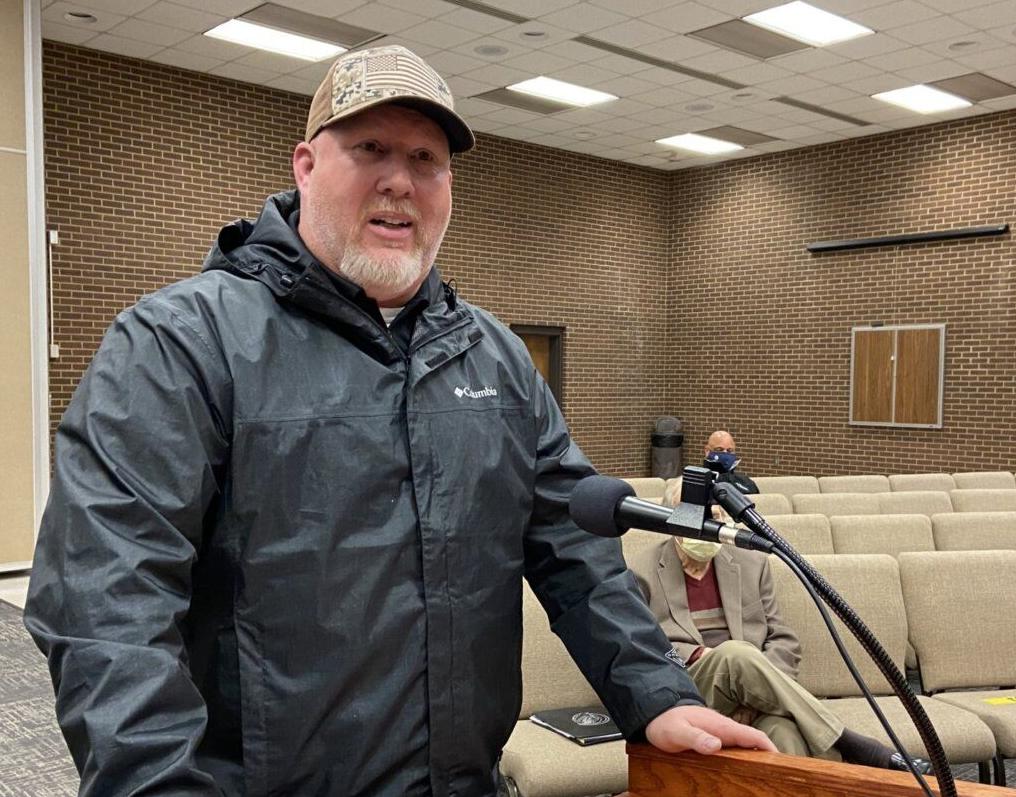