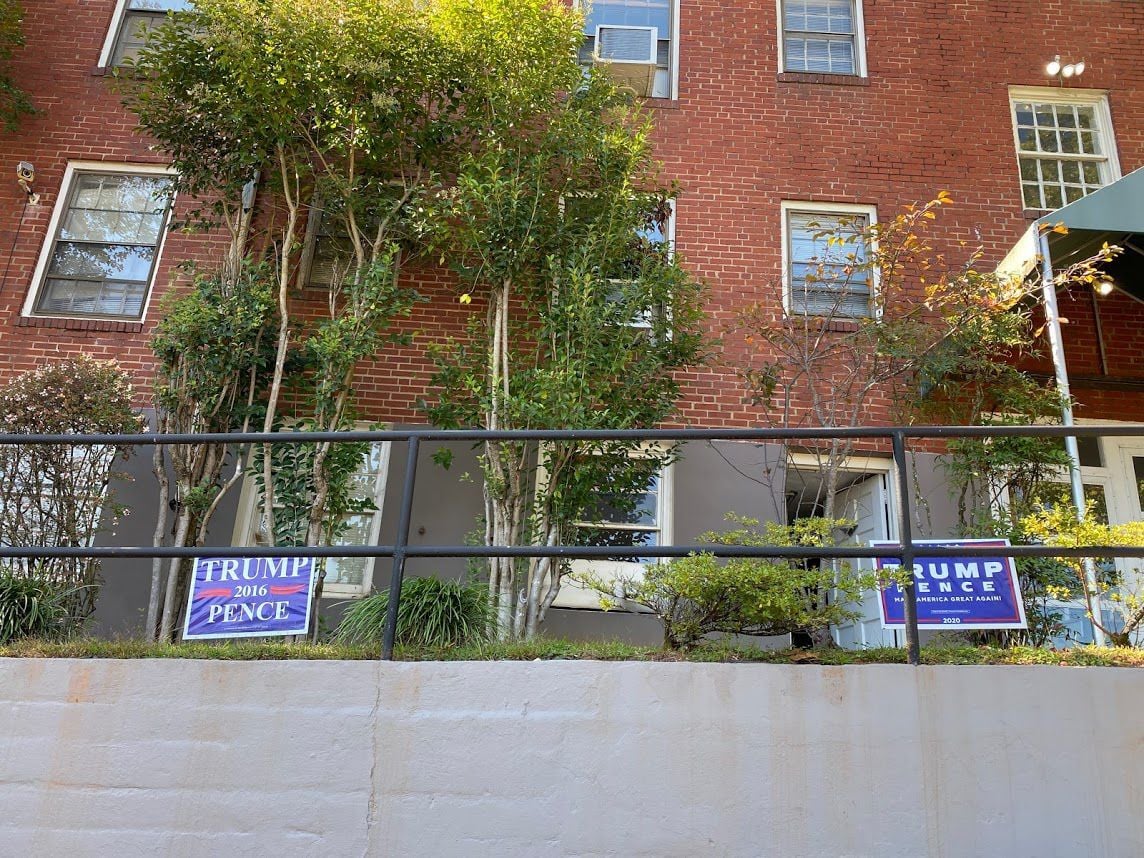 These signs were stolen at Jefferson Apartments at Jefferson Street and Rives Road Tuesday evening, but they were found discarded a short distance away. 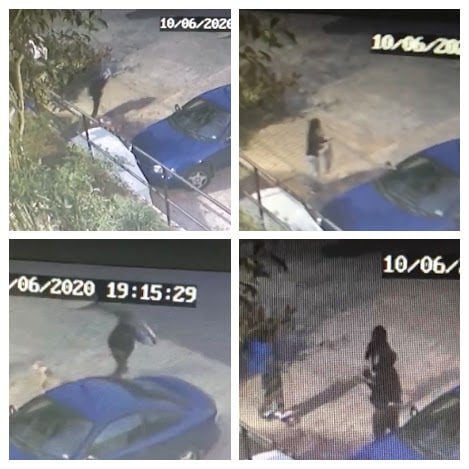 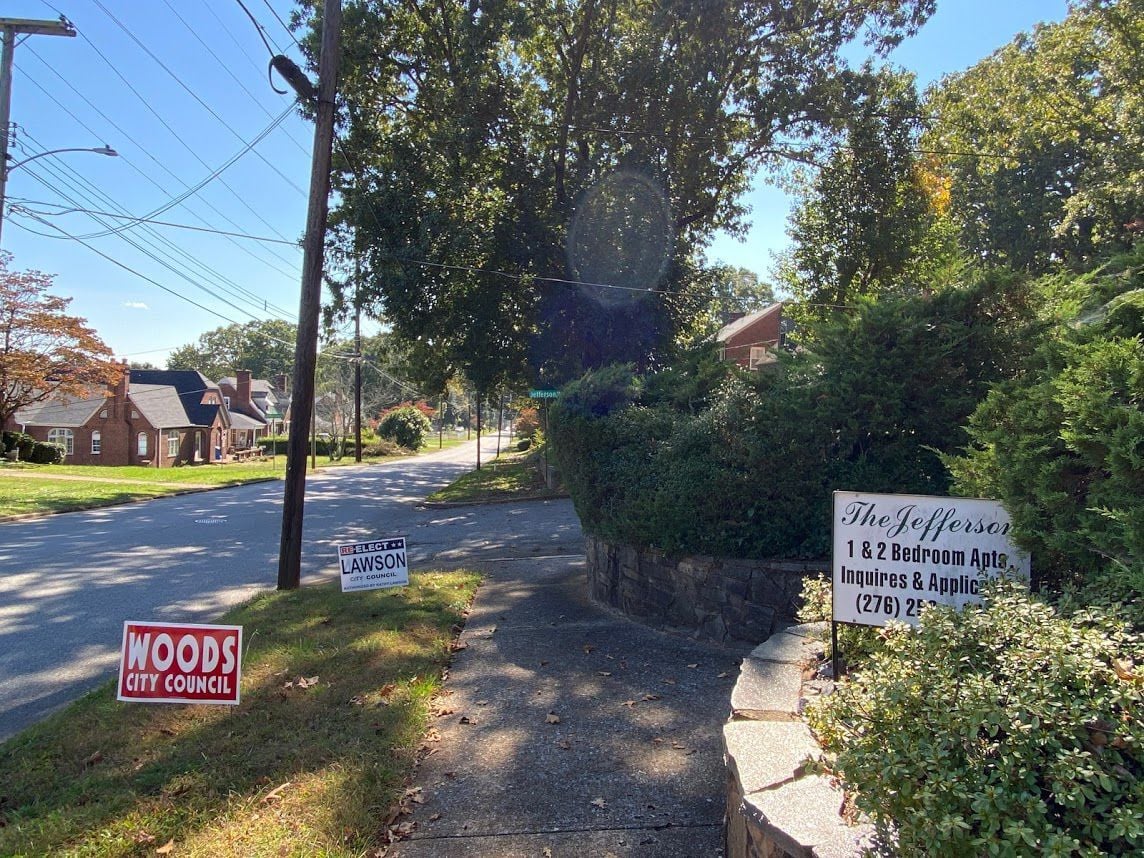 Jefferson Apartments at Jefferson Street and Rives Road in Martinsville have plenty of political signs on the property.

“The call we just received is the first report we have had this year of stolen signs,” Fincher said. “The officer is still working on the report, and I have not read the details, so you probably know more about this particular case than I do.”

Nelson Evans is the property owner of Jefferson Apartments at the corner of Rives Road and Jefferson Street.

“The signs were placed off of the road up on the parking lot wall,” Evans said. “I received a message from a friend driving by that saw the individuals taking the signs.

“I looked back on our security cameras of that property and located the three individuals at just past 7 p.m. removing the signs.”

Evans said he reported the incident to the Martinsville Police on Wednesday morning.

“It is a larceny to steal a political sign, so like other larcenies, it is a Class 1 misdemeanor, which carries up to 12 months in jail and up to a $2,500 fine,” Fincher said.

Theft of political signs is actually a crime in all 50 states.

Just last week The Washington Post reported tens of thousands of yard signs in the rural communities across Pennsylvania were vanishing almost as fast as supporters put them up.

“It usually happens in the dark of night, local Democrats say, but sometimes in daylight. Sometimes entire streets or neighborhoods are cleared,” the report stated.

There also have been a few reports of signs being removed in Henry County.

In mid-September, people in the northern end of Henry County, near the Franklin County line, said several Trump signs had been removed from yards.

One of them was in his yard, one was in his son’s yard and two were on property a little down the road. His son “heard the car at 10 o’clock at night,” he said – and the sign was gone.

His sign was “legitimate, nothing vulgar,” Carter said. “I’m looking to get a 4-by-8 planted out there in the middle of my field.”

Larry and Susanne Bryant, who live right at the county line, wrote by Facebook Messenger that they had put up two Trump signs – a white one and a blue one – at each side of their driveway on a Monday afternoon, and by 7 p.m. the blue one had been taken but the white one remained.

In other cases when people think political signs are stolen, they have been removed by the Virginia Department of Transportation for mowing or other purposes. Those signs are then stored in VDOT’s building until they are retrieved.

Signs placed within the public right-of way are subject to being removed, but both Carter and the Bryants said their signs were well within private property.

Although illegal, the sign-stealing case at Rives Road and Jefferson Street did not appear to be part of an organized operation.

A security camera captured three people approaching the parking lot of the Jefferson Apartments. One of the individuals was on roller skates, and the other had a small dog on a leash.

One of the individuals appeared to remove both signs, and the person with the dog crossed Rives Road with one of the signs and headed south on foot, with the person on roller skates following.

The other person had crossed the street and then returned and left with the other sign heading north on Rives Road.

The images were captured on video with a timestamp of 7:15 p.m. Tuesday.

Fincher said there was no quick way to determine the number of sign-stealing incidents in Martinsville during the election season four years ago, so a comparison between the two presidential elections can’t be made.

“But what I will say is that we have great citizens in Martinsville that recognize people may have different political views from one another, but it is still important to be respectful to everyone,” Fincher said. “And that the best way to get a message to others is through dialogue and not juvenile acts such as stealing or defacing signs.”

Nelson said the signs were discarded a short distance away and reinstalled Thursday morning.

Holly Kozelsky of the Bulletin staff contributed to this report. Bill Wyatt is a reporter for the Martinsville Bulletin. He can be reached at 276-638-8801, Ext. 236. Follow him @billdwyatt

Holly Kozelsky of the Bulletin staff contributed to this report.

These signs were stolen at Jefferson Apartments at Jefferson Street and Rives Road Tuesday evening, but they were found discarded a short distance away.

Jefferson Apartments at Jefferson Street and Rives Road in Martinsville have plenty of political signs on the property.