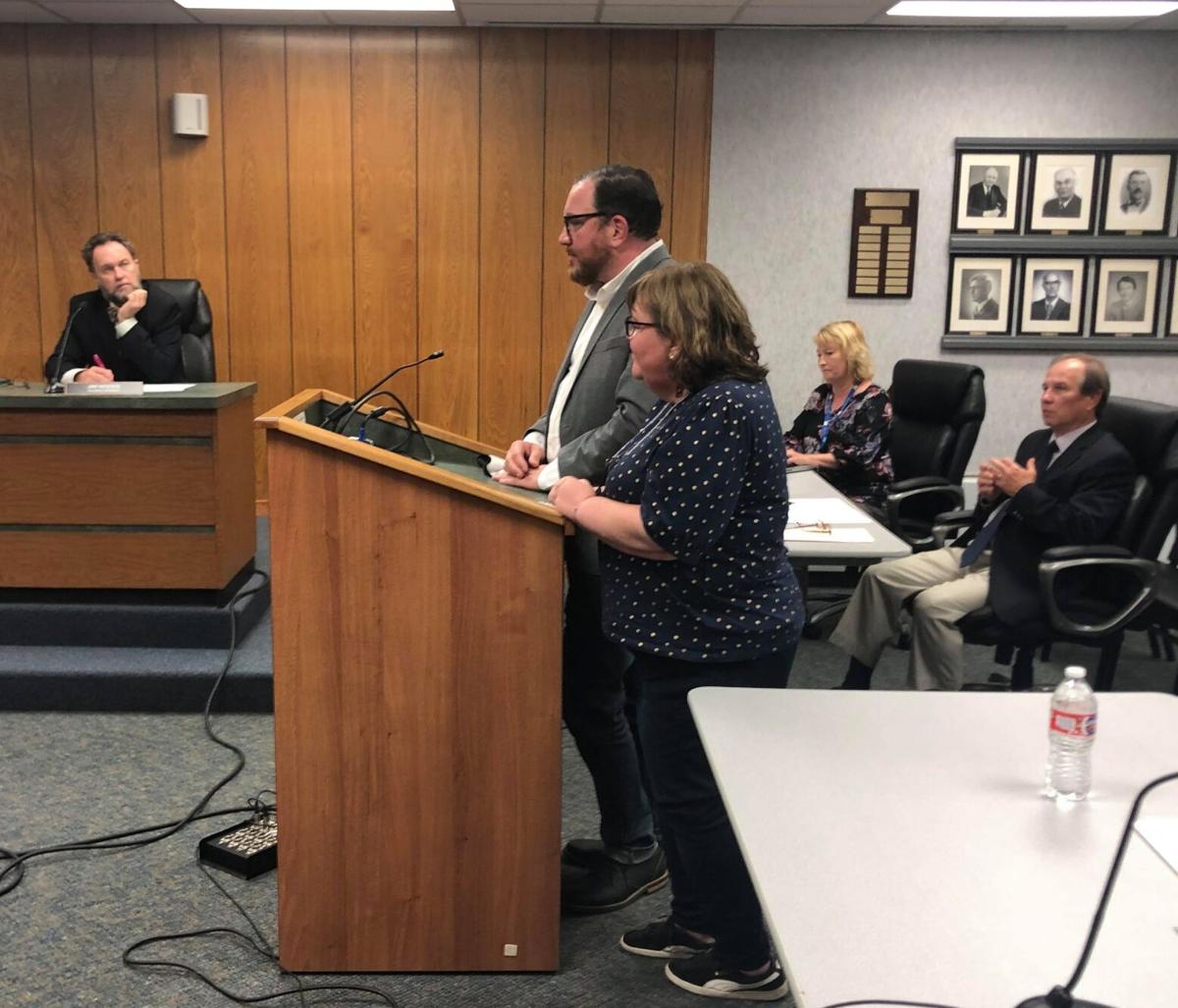 Martinsville City Council member Jim Woods (left) listens to a description Jason Alley (center) and Michele Jones give of the brewery, restaurant and entertainment center they are considering putting in the building which once was supposed to the the home of the Henricopolis School of Medicine, during Tuesday’s city council meeting. 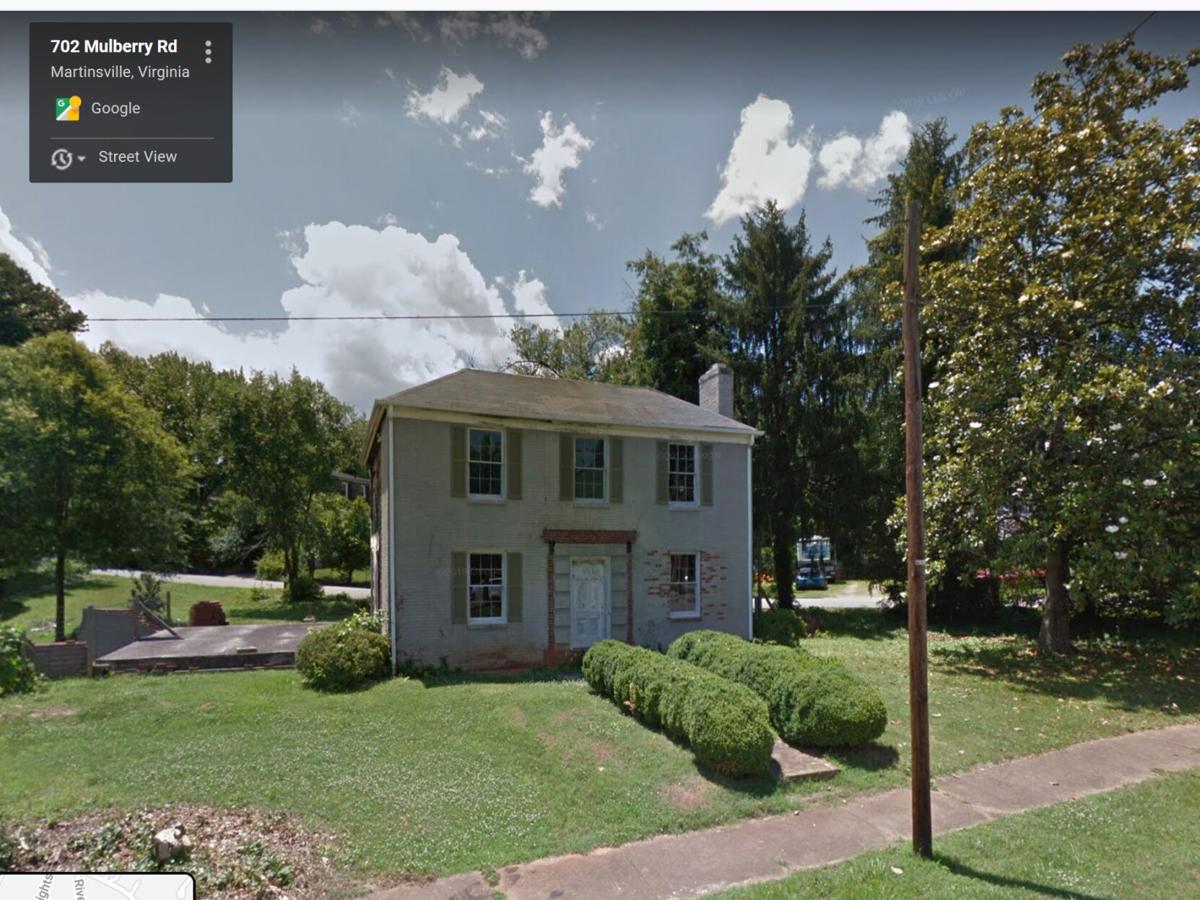 This Google Maps image from 2016 shows the house at 702 Mulberry Road before repair and renovations began this year. City Manager Leon Towarnicki said the house, once on the city's list of nuisance properties, now is ready to be lived in. 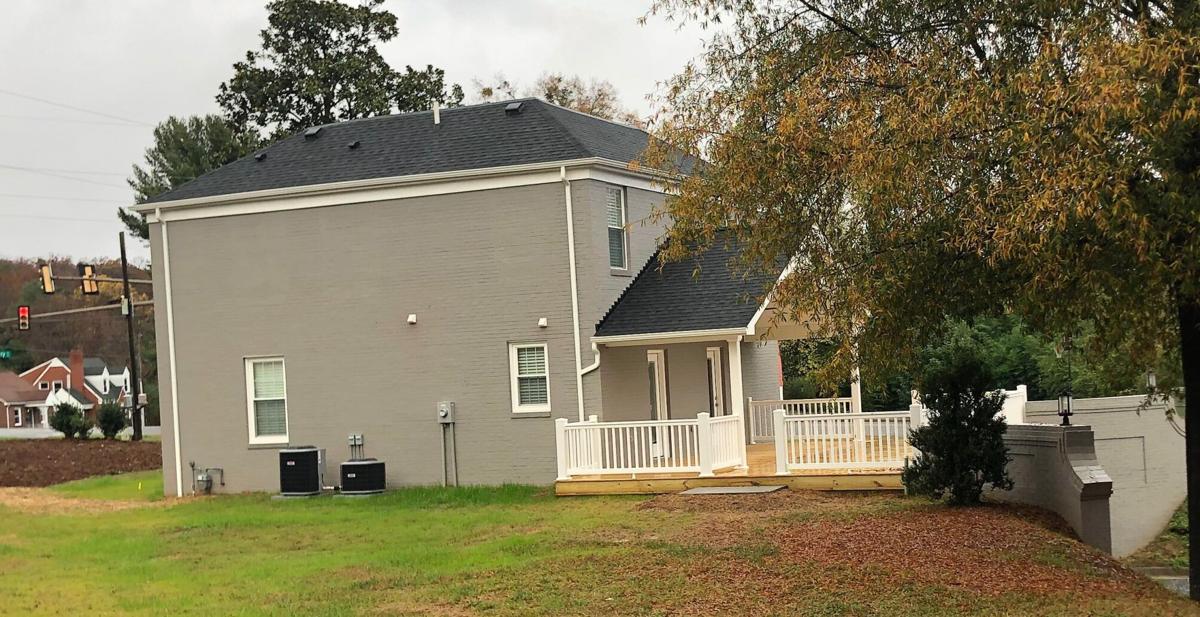 This is the back of the house at 702 Mulberry Road, which once was on the city's list of nuisance properties. 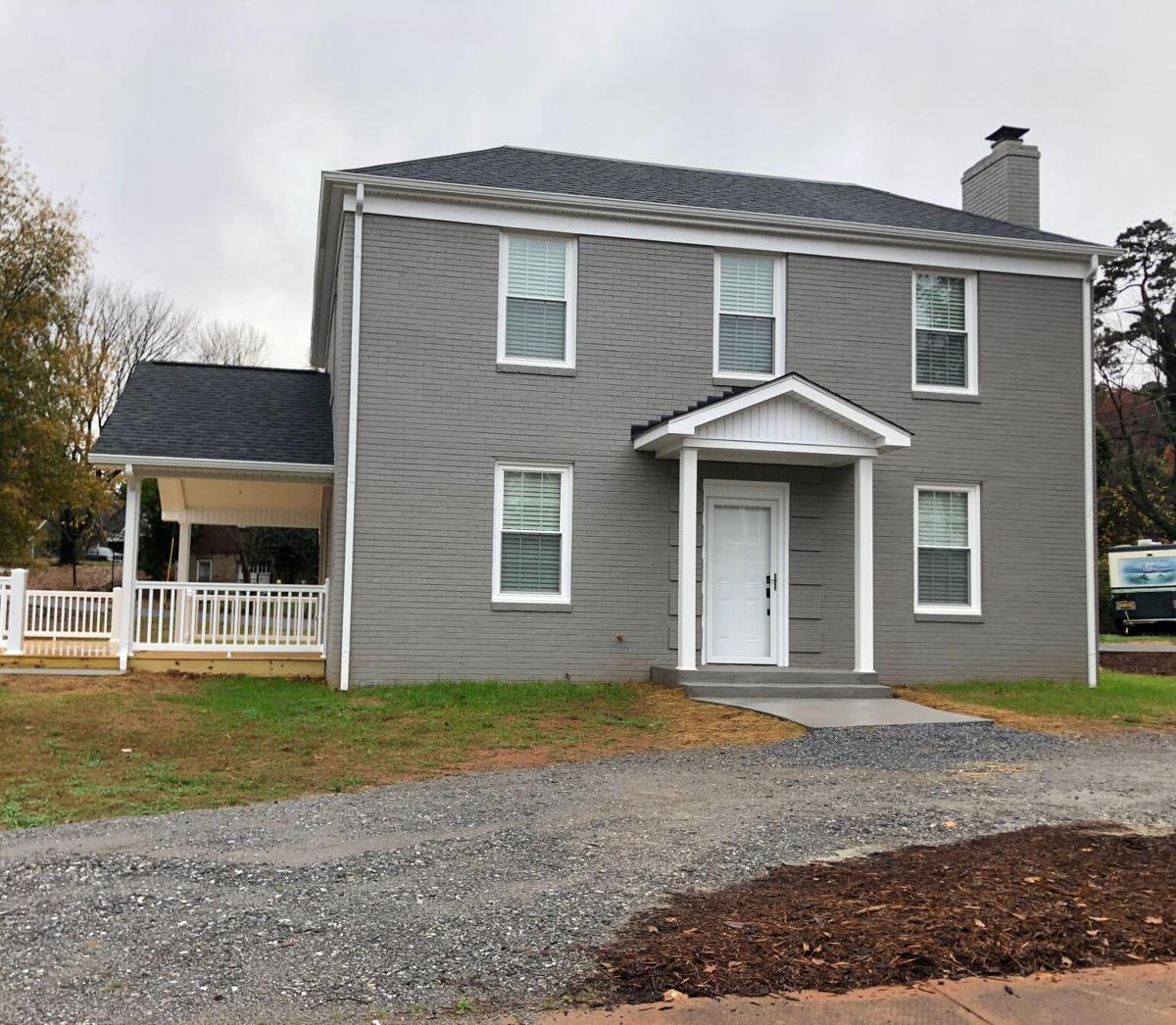 Once an eyesore on the city's nuisance properties list, the house at 702 Mulberry Road has been fixed up and is ready for occupancy.

Out-of-town entertainment and restaurant consultants are considering opening a brewery, restaurant and entertainment center in the building where the Henricoplis School of Medicine originally had been planned.

Martinsville City Council voted during its meeting Tuesday night to give Alley Jones Hospitality Consulting a 120-day option on the building, which is located at 62 Fayette St. The city now owns the building after the failure of Henricopolis.

Council acted as the Martinsville Land Bank Authority to approve the 120-day option. The option would give Alley and Jones time to “see if they can develop the project,” Martinsville-Henry County Economic Development Corporation Housing & Revitalization Coordinator Jeff Sadler said.

Chef Jason Alley and restaurateur Michele Jones said eventually they would like to use the basement for making and canning beer, the first floor for a restaurant and the upper floor for a tasting room, games and entertainment.

City Council member Danny Turner said it sounded like the place would be Martinsville’s equivalent to The Harvester in Rocky Mount. Pus, it would fill a void left after the Rives Theatre was destroyed by fire.

The “little white building” also on the property one day could be made into an apartment for visiting performers, Alley said.

“The best way to be part of the community is to embrace what is there” instead of building new structures, Jones said.

“We in the city are very big on repurposing buildings that have been abandoned or have served their use,” Mayor Kathy Lawson said.

Children have Santa Claus, and governments have legislation – and it’s time for City Council to make its Christmas wish list for legislation it hopes the General Assembly will address when it convenes in January.

That wish list is the 2021 legislative agenda, talked about briefly during Tuesday’s meeting, which would include:

Transportation: The city wants the state to upgrade those portions of U.S. 220 overlaying I-73 to interstate standards and make a priority improvements on Va. 58 improvements, especially between Stuart and Hillsville.

Education: The nine separate items basically advocate for the state to maintain school funding and not impose more rules unless it provides the finances to pay for carrying them out.

Governance: This category had 20 items, including to allow constitutional employees whose jobs are canceled because of reversion to take early VRS retirement without penalty and requesting the elimination of “local aid to the Commonwealth” in the stage budget.

At the Congressional level, the city supports requesting $3.72 million for the redevelopment of brownfields extending from the former American Furniture and Sara Lee sites along Aaron Street to Rives Road, $6.25 million to eliminate and redevelop blighted areas; and legislation for special federal incentives to businesses locating in regions with more than 5% job loss or declines in median income because of the adoption of NAFTA, WTO or GATT, among the 10 items on the list.

Council member Jennifer Bowles said that the city should add that if the commonwealth does away with funding for school resource officers, it still should allow school districts to decide to continue to employ them, and the other council members expressed agreement. “I just want to keep the funding,” she said.

City Attorney and Assistant City Manager Eric Monday said advocating for legislation is for everyone to do, not just municipalities.

“If you have something you feel very strongly about, you are fully entitled to contact your legislative officials,” he said. For Martinsville, they are state Del. Les Adams (804-698-1016, DelLAdams@house.virginia.gov) and state Sen. Bill Stanley (804-698-7520, district20@senate.virginia.gov).

“Both of those gentlemen are very responsive to their constituents,” he said.

City Manager Leon Towarnicki told council there were 34 water-service disconnections last week for non-payment, those owing the city $23,338, and 30 the week before. He said 225 customers through the Department of Social Services used $88,000 in funding the city had provided DSS to pay late bills.

Demolition on the former American of Martinsville building on Aaron Street is expected to begin after Thanksgiving. The demolition contract was awarded to S.B. Cox of Richmond.

A house that had been listed as a problem property at 702 Mulberry Road, on the corner with Jefferson, has been fixed up, and the owners have gotten its certificate of occupancy. According to Henry County GIS, Homtek LLC & Serenity Builders LLC bought the property in January from the A.C. Wilson Company for $36,100. “It’s beautiful, absolutely stunning what can be done with an older home,” he said. The house has been sold, and the contractors are giving it its finishing touches to the buyer’s specifications, he said.

Also during the meeting, council members:

Voted to include the Juvenile Domestic Relations Court to the courts’ charging fee of $20. When the ordinance providing for a security fee as part of costs in criminal and traffic cases was passed more than 20 years ago, JD was left out of it. Now, with the new Ordinance 2020-6, it also can benefit from this fee.

Discussed briefly the annual Regional Comprehensive Economic Development Strategy report from the U.S. Department of Commerce. That report is submitted by March 31 to align with a planning grant. Each jurisdiction is requested to determine a priority list of projects. Approval of the 2021 CEDS will occur at the council’s meeting on Dec. 8. That wish list may be seen at https://www.martinsville-va.gov . “It can set a vision of economic development,” Martinsville-Henry County Economic Development Corporation CEO Mark Heath said, adding that to have such a list is helpful when applying for grants.

Heard from Monday that he had been appointed by the General Assembly to the commission for the 250th anniversary of the American Revolution. The role will last for seven years. “It’s a pretty big deal for Virginia,” he said. “This will literally mean hundreds of millions of dollars to the commonwealth of Virginia.”

Voted to cancel the Nov. 24 meeting, because it falls right before Thanksgiving. There is no time-sensitive business to handle by then, members said, but should anything needing attention come up, they could reinstate Nov. 24 as a meeting date or City Council could chose another Tuesday night to meet. Barring any special called meeting, the last city council meeting of the year will be Dec. 8.

Marketing executive Pete Snyder, 48, was back in Martinsville on Tuesday to talk about his candidacy for governor at a meeting of Republicans …

ELECTION 2021: Rasoul campaigns in Martinsville: 'I'm the only candidate running from the western half of the state'

State Del. Sam Rasoul (D-Roanoke) is one of eight candidates seeking the Democratic nomination for lieutenant governor, but no one is close to…

The event was primarily in response to Griffith's support of former President Donald Trump's unproven allegations of massive voter fraud, claims that led to the storming of the Capitol last month.

Pete Snyder has been in Martinsville and Henry County five times to dole out $3,000 checks to businesses hurt by the pandemic.

Martinsville City Council member Jim Woods (left) listens to a description Jason Alley (center) and Michele Jones give of the brewery, restaurant and entertainment center they are considering putting in the building which once was supposed to the the home of the Henricopolis School of Medicine, during Tuesday’s city council meeting.

This Google Maps image from 2016 shows the house at 702 Mulberry Road before repair and renovations began this year. City Manager Leon Towarnicki said the house, once on the city's list of nuisance properties, now is ready to be lived in.

This is the back of the house at 702 Mulberry Road, which once was on the city's list of nuisance properties.

Once an eyesore on the city's nuisance properties list, the house at 702 Mulberry Road has been fixed up and is ready for occupancy.