How cases in the West Piedmont Health District compare. 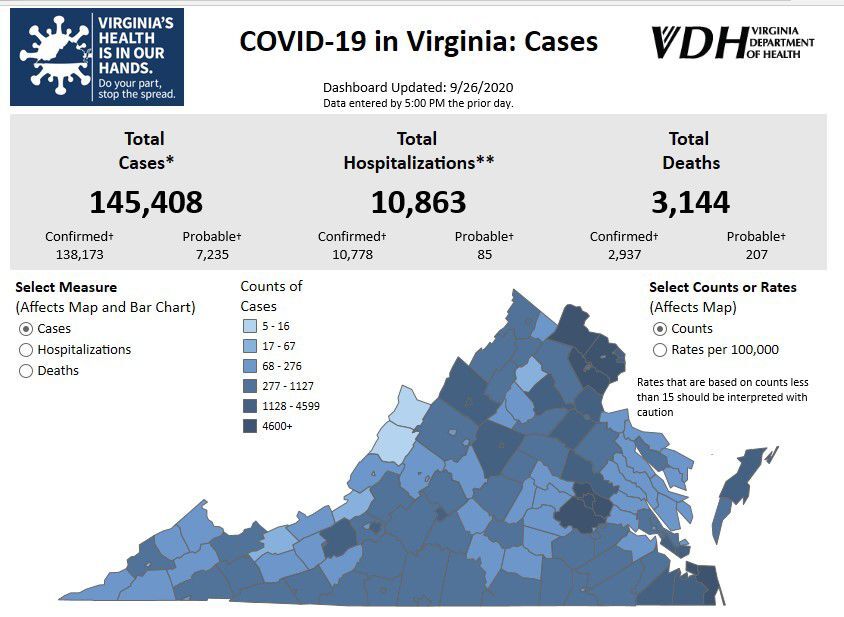 There were eight new deaths of COVID-19 reported Saturday by the Virginia Department of Health, and two of them are our neighbors.

Two more residents of Henry County and Patrick County have now died from the disease caused by the novel coronavirus.

The VDH does not disclose information about deaths but tracks data based on a person’s residence.

There also were 23 more cases reported Friday and Saturday, bringing the total to 2,040 in the district, the vast majority of them being white, female and between the ages of 40 and 60.

Most of the deaths, though, are ages 70 and older (53 of them), and the past five deaths have all been women, creating a plurality of 35. About 67% of those who have died are white.

Across the state, about half the deaths have been citizens older than 80, about half of them white and slightly more of them male.

Both Patrick County and Henry County have been hit by significant and deadly outbreaks in senior-care facilities, which across Virginia has accounted for most of the deaths.

Both Martinsville (124) and Patrick County (141) have much higher per capita death rates than Henry County (41).

The cumulative totals since the pandemic began:

Three injured when car flips and catches fire in Collinsville

Three people were transported to Sovah-Martinsville with minor injuries after the car in which they were traveling veered off the road, flippe…

Martinsville man shot in the legs at Collinsville convenience store

A Martinsville man was shot Saturday night while in the parking lot of Circle K Convenience Store at 1560 Virginia Ave. in Collinsville.

The sale of the Baldwin Building, home of New College Institute, to the state has been completed.

The rig overturned in the median in the 9000 block of Virginia Avenue.

How cases in the West Piedmont Health District compare.