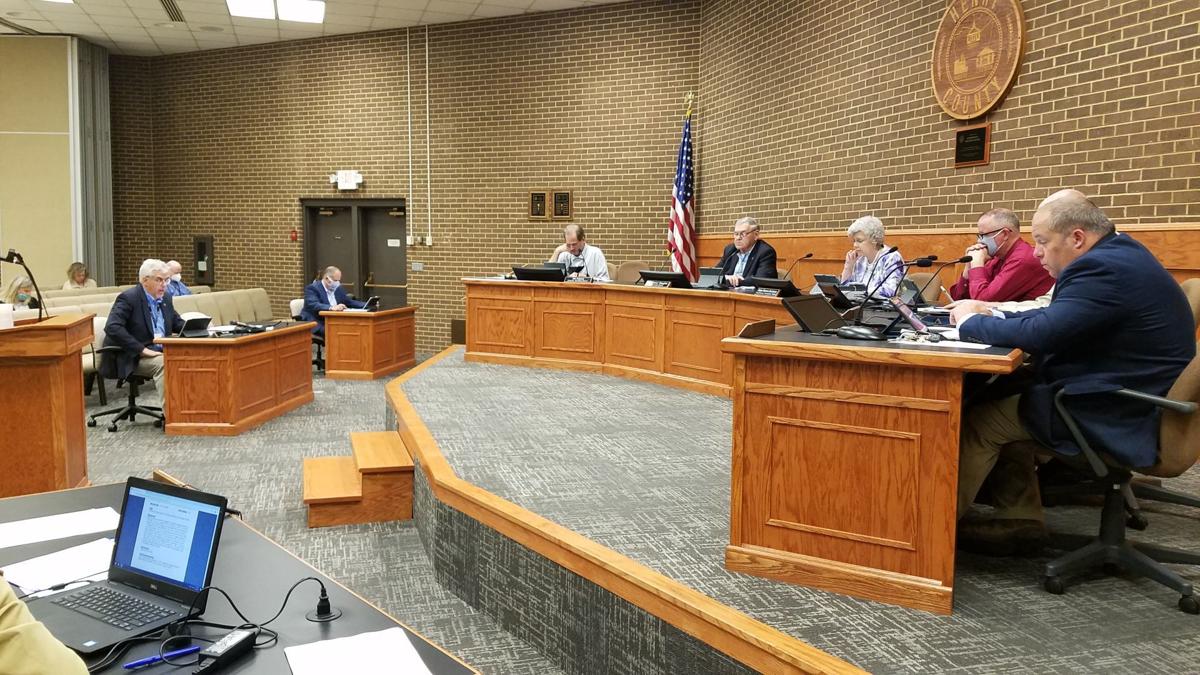 Henry County Administrator Tim Hall (seated, far left) describes how the county plans to allocate part of the $4.4 million in federal COVID-19 relief funds during the Board of Supervisors meeting Tuesday afternoon. 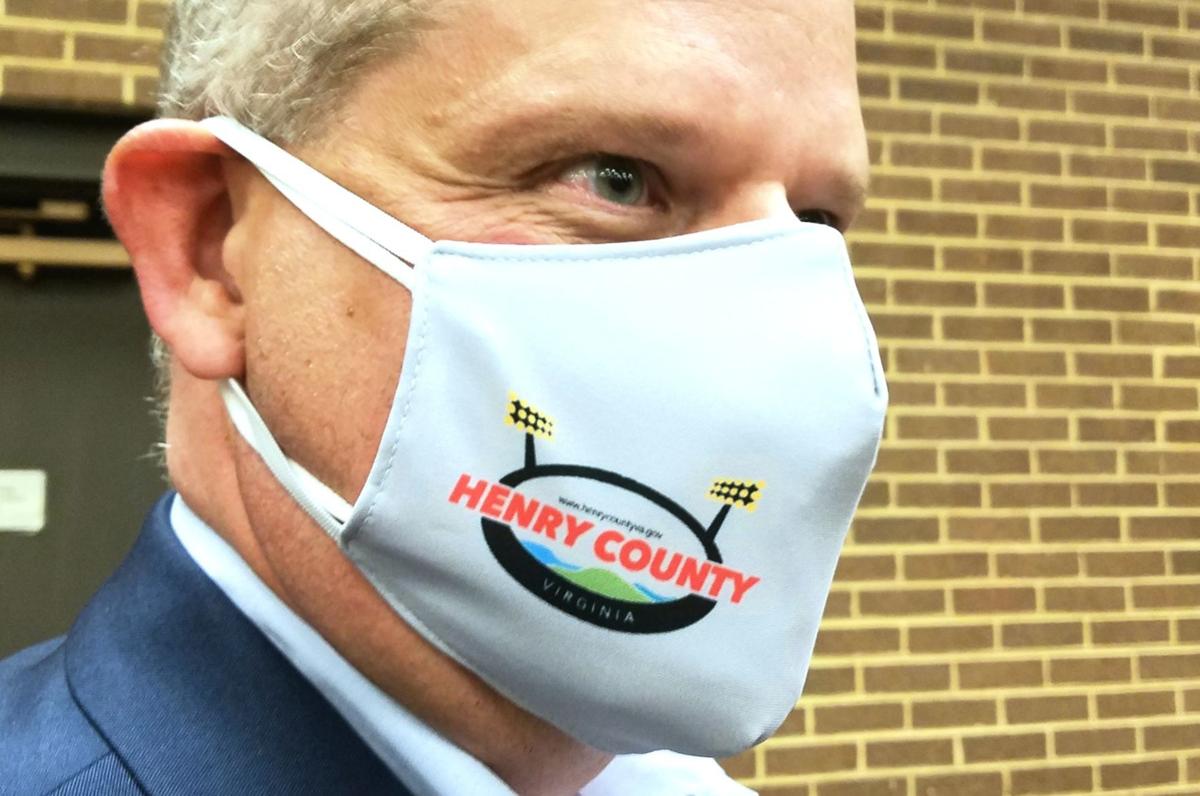 Deputy County Administrator Dale Wagoner models a new mask emblazoned with a Henry County logo during the Board of Supervisors meeting on Tuesday. The county used a portion of its pandemic relief funds from the federal government to purchase masks and other gear to protect county employees from the spread of COVID-19.

More help is on the way for Henry County small businesses affected by COVID-19.

The Board of Supervisors on Tuesday approved using a portion of the county's $4.4 million in federal pandemic relief funds to start the Henry County CARES Act Small Business Grant program.

Other funds will go to volunteer fire and rescue agencies, residents who need help paying utility bills, purchasing protective gear and buying technology to aid county employees with telecommuting during the pandemic.

Still, this only accounts for some $2 million of the $4,410,903 in Coronavirus Aid, Relief, and Economic Security (CARES) Act of 2020 allocated to Henry County to deal with the extra costs of responding to the public health emergency.

The problem, County Administrator Tim Hall told the board, is figuring out how localities are allowed to spend the money in the absence of clear guidance from the federal government.

The board voted to appropriate the federal funds to the current fiscal year budget during its 6 p.m. session after holding a required public hearing at which no one spoke. A public hearing is required whenever a budget is altered by more than 1% of the total, board documents show.

CARES Act funds are to be used for “necessary expenditures” related to COVID-19 between March 1 and Dec. 30. They cannot be spent on items already in the county’s budget before the pandemic, nor can they be used to make up for lost tax revenue, Hall said. Beyond that, the government has not been specific about what kind of expenses are eligible.

Hall said county staffers have spent a great deal of time and research just trying to figure out what strings are attached to the money.

“We’re going to try really hard not to do this, but if we spend CARES Act money on something that is determined not to be eligible ... it will be taken from the next state allocation that we get. So we are being very careful with this,” Hall said.

In talking to his counterparts across the state, Hall likened it to “being in a dark room and not knowing where the furniture is. We’re all going to stub our toes at some point.”

Whatever funds are not spent by year’s end must be returned, he said.

“Whatever we’re going to spend, has to be spent and the product in place by December 30. Not just appropriated, not just a contract, but in place,” Hall said. “So, clearly this is a very small window of opportunity.”

During the supervisors’ session at 3 p.m., Hall shared several recommendations from staff of how to spend some of the federal money, noting, “This is a fluid list. Hopefully we will have several more ideas of how to tap into that money moving forward.”

The county will devote $250,000 to set up the grant program, which is meant to help businesses continue to be viable and serve Henry County residents, board documents state. It's similar to grant programs announced recently by The Harvest Foundation and the city of Martinsville.

Grants of up to $5,000, depending on the size of the company, are available to businesses located in the county with 30 or fewer full-time employees. Businesses must hold a current county business license, be up to date on county taxes and must have experienced direct impact from COVID-19.

These grants can be used for COVID-related expenses, including marketing, e-commerce activities such as software, website updates, technology purchases, rent and utilities, physical enhancements such as Plexiglas separations or outdoor seating for restaurants, replacement of spoiled food, accounting or some legal expenses (except for bankruptcy proceedings).

Businesses can apply at www.henrycountyva.gov, or print and mail in the form. There is a 2-page application, and applicants must provide a current W-9 form. Applications will be reviewed by a panel including the county administrator, deputy county administrator, county finance director, deputy finance director and a representative from the Martinsville-Henry County Economic Development Corp.

Part of the remaining CARES Act funding will be used for computers and equipment to enhance the telework capabilities of county staff. Hall said the county faced challenges supplying the necessary technology for employees to work from home. Supervisors approved awarding contracts to Dell Computer for $302,003, Daly Computer for $233,648 and Software House International for $76,271 using CARES Act funds.

The board also appropriated $65,113 to Henry County Registrar Elizabeth Stone to buy personal protective equipment and sanitizing supplies for use by poll workers in the November election.

Hall said they are looking at the possibility of what he called “combat pay,” or stipends for first responders and those “on the front lines” of responding to COVID-19 in the county.

In addition, Hall said, “We want to do things to this building,” such as installing touchless systems in restrooms to help prevent the spread of germs.

“We don’t want to spend the money frivolously, but we don’t want to leave it on the table either. We should never lose sight of the fact that it is taxpayer money, and we should spend it judiciously.”

Other planned uses of the CARES Act funding include:

Henry County Administrator Tim Hall (seated, far left) describes how the county plans to allocate part of the $4.4 million in federal COVID-19 relief funds during the Board of Supervisors meeting Tuesday afternoon.

Deputy County Administrator Dale Wagoner models a new mask emblazoned with a Henry County logo during the Board of Supervisors meeting on Tuesday. The county used a portion of its pandemic relief funds from the federal government to purchase masks and other gear to protect county employees from the spread of COVID-19.