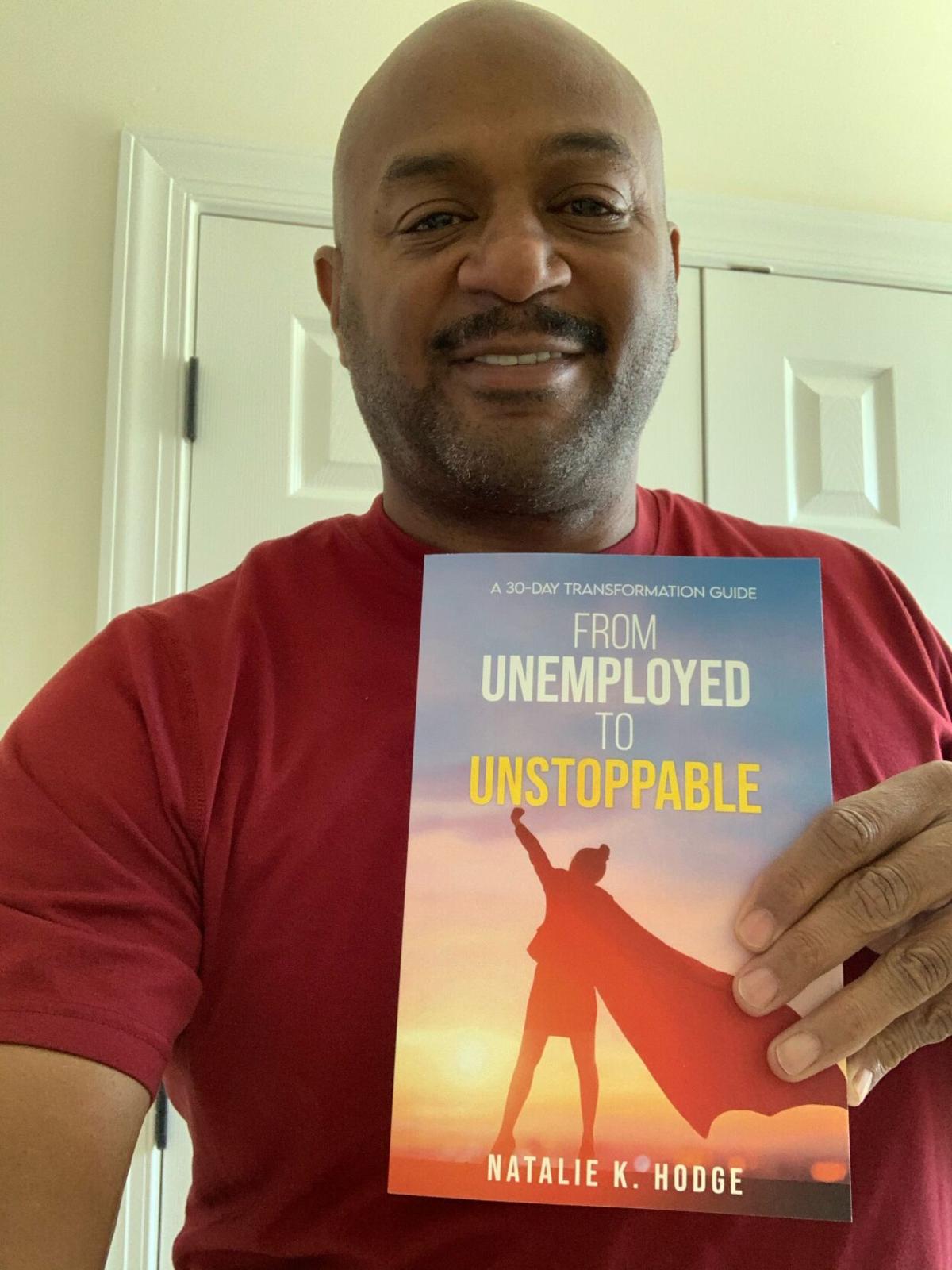 Darrell Dalton was the first person to buy Natalie Hodge's  latest book, "From Unemployed to Unstoppable." 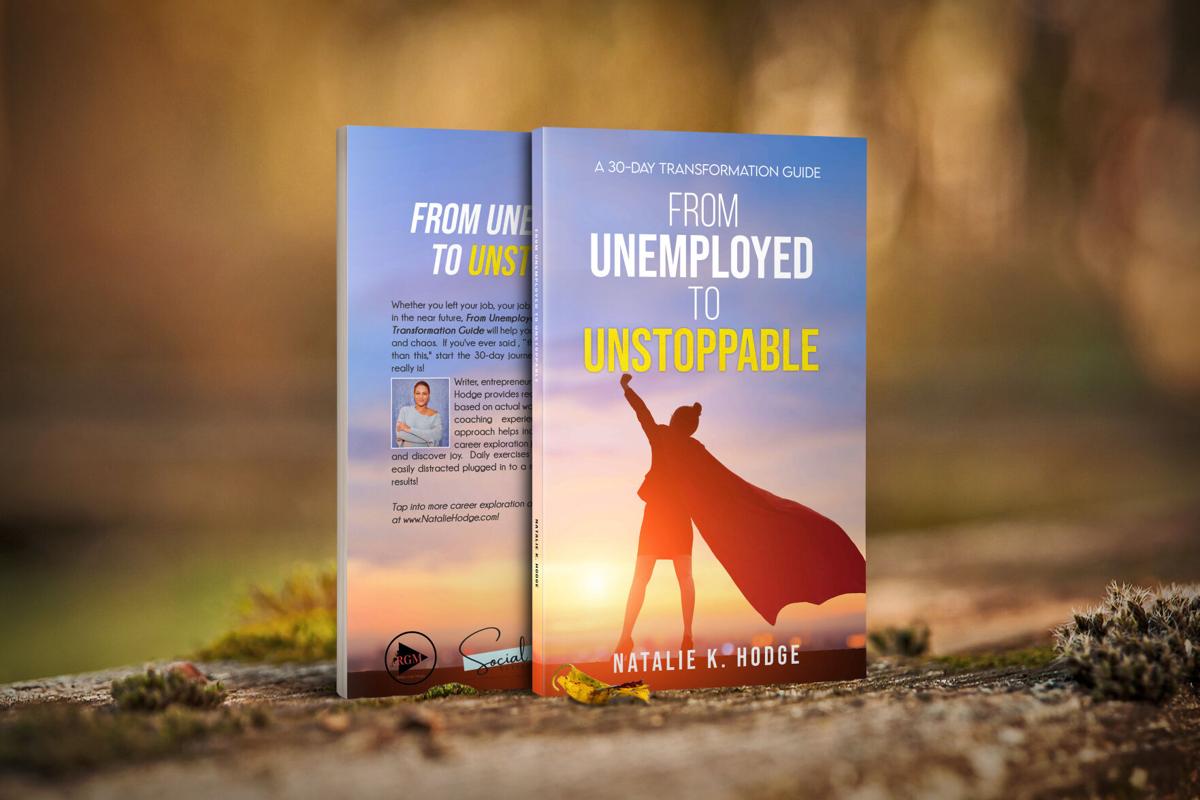 “From Unemployed to Unstoppable: A 30-Day Transformation Guide” by Natalie Hodge is for sale at Books & Crannies as well Amazon.com.

There’s more to getting a job than the resume-and-interview package – and it involves preparing your whole self.

That’s the message of Natalie Hodge, whose latest book, “From Unemployed to Unstoppable: A 30-Day Transformation Guide,” spells out the behind-the-scenes aspects of making a job or career change.

The book was born during the pandemic, which affected the jobs and livelihoods of millions in America. As the project director of the West Piedmont Workforce Development Program and after a long line of other jobs involving coaching people on careers, Hodge was right there in the trenches with them.

“All these conversations started – ‘What do I do now?’” she said. “There was a segment of the population that could not go to work, and also a large contingency of people still employed but working in the new reality.”

Through new hobbies at home or changes in the nature of their work, people “discovered new things they might want to explore. … They had more time to think about what they want to do. This book popped into my mind” to address those issues.

The 30 brief chapters of “From Unemployed to Unstoppable” gives one theme each day, with related tasks, to get readers primed for positive change.

Its daily topics include taking inventory of your strengths (ask a few friends to list your top five skills) – get rid of old ideas and old actual clutter – research potential jobs – list people, even the most unlikely, who could be good for networking – have brief but meaningful communications with people with connections to your career of interest.

Each day’s section features a topic that has to do with “life readiness,“ she said, with “a few nuggets about job strategies and best practices.” All of those improvements add up to compel an employer into recognizing a person as a good candidate.

It’s so easy to get distracted by the resume and interview side that “people are missing the big picture kinds of checkpoints to help them think about career in a new way that can carry them on forever,” she said.

As a side effect of other jobs she has had, Hodge has done a great deal of career counseling over the past 15 years, she said.

Plus, “people reached out to me because I had moved so many times and been able to always find employment some way, somehow. I learned some strategies along the way to help me do that.”

However, she said, there just aren’t a lot of jobs out there related to her major, so her work took off in other directions. She has worked in property management and investment and university residence life in the San Francisco Bay area, Detroit, Ithaca, N.Y., and New York City.

In those jobs, not only did she help people with housing but also with the occasional support on job searches. That became her entire focus over a summer spent in career development for Stoneybrook University in Long Island, where she also worked a school year as the assistant director of residential services.

Throughout her years of living away from her hometown, Hodge also delved into the worlds of television and film in New York City and Los Angeles.

She found her way back to Henry County, where in 2017 she became the project director of the West Piedmont Workforce Development Program as an employee of Ross Innovative Employment Solutions.

Her role has included overseeing the program that has a staff of 20 covering Martinsville and Danville and the counties of Henry, Patrick and Pittsylvania, “all people who are supporting people to find resources to become employed.

“Every aspect of it has been so absolutely rewarding to know that my work every day has an impact on people in our community, meeting people who were unemployed and then transition into something that allows for them to support their families … people who completely changed their lives and the lives of generations to come,” she said.

This year, she became the special project coordinator, which changes the way the organization operates in light of pandemic safety measures.

In seeing the effects the pandemic had on people’s employment, “I had this lightbulb that went off,” she said: “’How do I help people understand that they are not their jobs?’ You can have a job that is incredible and enhances your life and that’s great, but that job can go away and you have to remain, so what tools and insights can I give people … to feel confident that they can make a transition?’”

There are plenty of resources that tell people how to write a resume or prepare for a job interview, she said. Her book focuses on the less obvious but just as crucial.

That includes creating a network, even if you’re new to a community; how to communicate skills and experience; how to purge your home and office of too much stuff;

“Unstoppable” is available locally at Books & Crannies and also can be ordered off Amazon.com.

Darrell Dalton was the first person to buy Natalie Hodge's  latest book, "From Unemployed to Unstoppable."

“From Unemployed to Unstoppable: A 30-Day Transformation Guide” by Natalie Hodge is for sale at Books & Crannies as well Amazon.com.