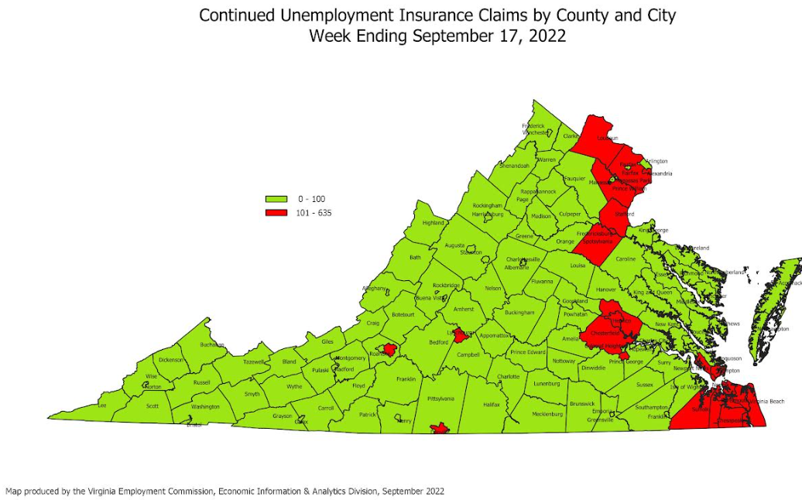 Unemployment rates in the city of Martinsville and Henry and Patrick counties declined slightly in the most recent reporting period.

The local region mirrored the unemployment averages statewide, while the national average remained unchanged. All rates were down dramatically from the prior year.

The city of Martinsville is at 4.8%, sixth highest rate in the state, but below Buchanan County at 5%, the cities of Emporia and Hopewell at 5.2%, Danville at 5.3% and Petersburg with the state’s highest unemployment rate at 6.9%.

Numbers for July, published Aug. 31 by the Virginia Employment Commission, show Martinsville’s rate of 4.8% is down from 4.9% in June and down from 7.7% last year.

The unemployment rate in Henry County was 3.1%, down from 3.2% the month before and down from 5% the prior year.

In Patrick County, the unemployment rate stood at 3.4% in July, down from 3.6% in June and down from 4.9% in the same period the year before.

The Martinsville Micropolitan Statistical area includes Martinsville and Henry County and shows a combined unemployment rate of 3.4% in July, down from 3.5% in June and down from 5.5% last year.

Nationally, the rate is at 3.8%, unchanged from the month prior and down from 5.7% last year.

Patrick County has a labor force of 7,497 with 7,245 employed. There are 252 people without jobs in Patrick County.

In the region, the City of Danville’s unemployment rate in July was 5.3%, Pittsylvania County was 3.2% and Franklin County is at 2.9%.

Out of 133 localities, Martinsville is at 128, Patrick County at 100, tied with the cities of Bristol, Colonial Heights, Fredericksburg and Roanoke, and the counties of Dinwiddie and Prince George. Henry County is even with Suffolk, Waynesboro and Galax cities, and the counties of Northampton, Northumberland, Pulaski, Craig, Carroll, Charles City Greensville, Appomattox, Alleghany and Campbell counties, at 77.

The lowest rate in the state for June goes to Arlington, Highland and Madison counties at 2.1%; followed by Falls Church City at 2.2%; New Kent, Floyd, Grayson and Richmond counties at 2.3%; and Loudoun, King George, Greene, Frederick and Fauquier counties; and the cities of Alexandria, Fairfax and Poquoson all at 2.4%.

The Virginia Employment Commission (VEC) announced on Thursday that the number of initial claims fell again in the latest filing week to 1,382, reaching their lowest level since the early summer. Administrative and support and waste management, health care and social assistance, manufacturing and retail trade were the leading industry clusters for the filed initial claims.

Over half of initial claims with a self-reported industry were in administrative support and waste management, health care and social assistance, manufacturing and retail trade. Continued weeks claimed totaled 9,484, which was a decrease of 802 claims the previous week and 75% lower than the 37,569 continued claims from the comparable week last year.

Eligibility for benefits is determined on a weekly basis, and so not all weekly claims filed result in a benefit payment. This is because the initial claims number represent claim applications; claims are then reviewed for eligibility and legitimacy.

“While jobs added since January and unemployment levels continue to be strong, I am focused on labor participation amidst this slight pull back in job numbers,” said Gov. Glenn Youngkin in a release. “Virginia is battling hard against the economic headwinds coming from Washington, and our mission to generate economic growth and investment continues to be a top priority for the Commonwealth.”

Despite the decline in employment in the month, employment growth throughout the year remains strong, averaging 14,000 a month, over three times the 2021 average, and nearly double the pre-pandemic average in 2019. The Commonwealth’s seasonally adjusted unemployment rate of 2.6% is 1 percentage point below the rate from a year ago.

“While employment levels contracted in the month, the unemployment level continued to improve,” said Secretary of Labor Bryan Slater in the release. “The unemployment rate has returned to pre-pandemic levels, and we see job openings still exceeding the number of those unemployed. We continue to pursue efforts to get more Virginians back in the labor market to satisfy the current employment opportunities.”

“On a year-to—date basis, we have seen employment pick up substantially compared to 2021,” said Secretary of Commerce and Trade Caren Merrick in the release. “We remain on pace to achieve the highest level of annual job growth in the last five years.”

Unemployment rates for city and counties in Virginia.