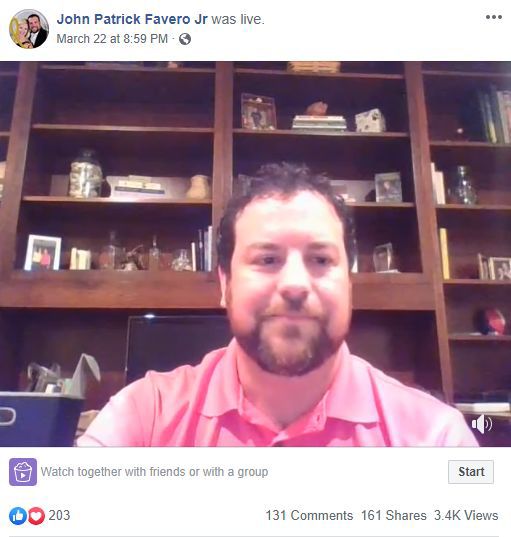 Dr. John Favero of Martinsville Family Medicine sits down for a live chat via Facebook about COVID-19 in Martinsville and Henry County. 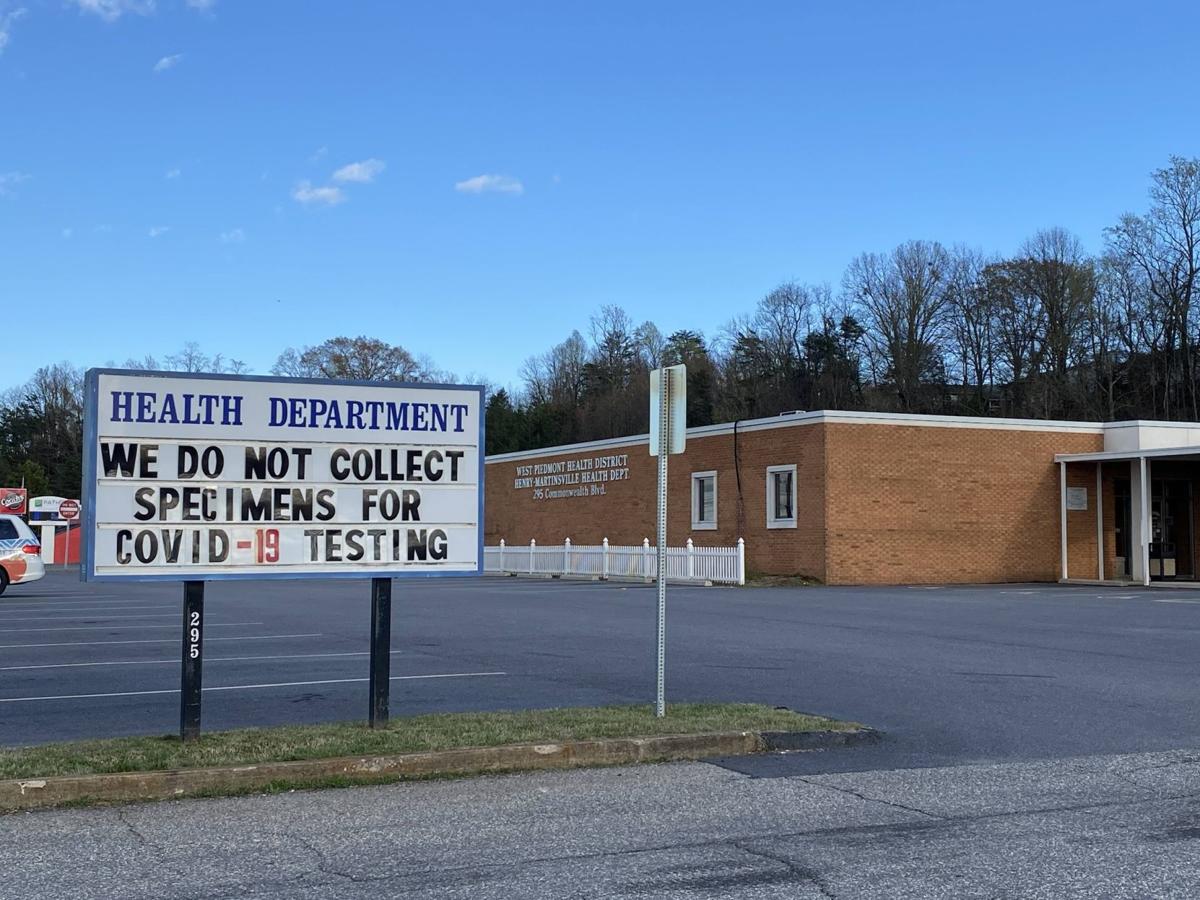 Henry-Martinsville Health Department does not collect specimens for COVID-19 testing.

So you think you might have the coronavirus. What do you do? The answer is not what you might think.

One doctor in Martinsville is wading into the public discussion to provide insights and guidance on social media and try to clarify exactly what the picture is here and how the spread of COVID-19 might be handled.

“Unfortunately, most physician’s offices, urgent cares, even the emergency room at this point, they don’t have a very good plan with how to deal with patients that suspect they have COVID-19, and so at this point the best thing to do is call ahead, and if you’re going to an urgent care or you’re going to your primary care doctor — call them and give them the opportunity to tell you upfront what needs to be done,” said Dr. John Favero, owner of Martinsville Family Medicine on Greensboro Road.

For instance, there’s a sign in front of the Henry-Martinsville Health Department on Commonwealth Boulevard that makes it clear employees “do not collect specimens for COVID-19 testing.”

Martinsville and Henry County officials have stated “calling 911 may result in a recommendation for self-care at home,” and if EMS personnel do respond “not all patients who are exhibiting COVID-19 like symptoms will require transport to the hospital.”

There might be a reason no one has tested positive for COVID-19 in Martinsville and Henry County — similar to the reason why West Virginia was, for a while, the only state in the country that was supposedly coronavirus free.

An article in USA Today that described how James Vigil, 53, became the first COVID-19 case in West Virginia is disconcerting. His wife knew he was sick with the right list of symptoms.

She took her sick husband to the emergency room, where finally he was swabbed for COVID-19 only after she persisted through layers of hospital personnel who initially had refused to treat him.

If she had not persisted, her husband would have eventually gotten better, or died and no one would have known it was COVID-19.

Favero went live on Facebook earlier this week to answer questions from his patients and people in the community who have not been able to find answers to basic questions about the virus.

“The tests seem to be taking quite some time,” Favero said. “The first test we [Martinsville Family Medicine] did was last Monday, and we are still waiting for those results. So we don’t know if they are positive yet at this point.”

Martinsville and Henry County have no confirmed cases of COVID-19 because the results of the first tests have not come back.

“I would expect testing numbers and results to greatly increase here in the near future, over the next couple of days, as the first round of testing starts to return,” Favero said.

So you’ve got the symptoms — primarily fever, tiredness and dry cough. The Centers for Disease Control and Prevention says you could have been sick for as long as two weeks before you started showing the symptoms. What next?

“If you think you have COVID-19, it does not automatically require hospitalization,” Favero said. “If your symptoms are mild, you’ll be requested to stay at home under quarantine, and there are different ranges when you look at the potential for that quarantine. Some are saying up to 14 days, some say 3 to 5 days after symptoms subside and you go without a fever.

“So you need to make sure that you’re following along with someone’s recommendations, and if you have a mild illness, if you have a mild cold, even if you think it’s COVID-19, you may just want to shelter in place at your house — take cough and cold medicines — not ibuprofen [there’s some link between it and worsening kidney disease], so take something Tylenol-based and a cough suppressant.

“If you have shortness of breath, your respiratory system is compromised, you need to call 911, go to the emergency room and make sure you alert them ahead of time that you think you could have COVID-19, so that way they can treat you appropriately and not contaminate themselves or any other space in the emergency room.”

Favero said everyone in the health care field does things a little bit differently. At Martinsville Family Practice staffers will ask you to drive your car around to the back of the building and remain in your car.

“We will triage you over the phone” while you are in your car, Favero said. “We ask if you have any travel history, any upper respiratory symptoms and if you do need to be seen and have testing done, then we are actually seeing them [patients] in their car, so that way they don’t come in the office.

“If at that point we deem that they’re safe to come into the office, we will allow them in, but one of our primary goals is to not have someone with potentially COVID-19 walking in the office and contaminating space as well as the personnel in the office — so we’re being very vigilant about that.

“When we see those [potentially COVID-19] patients, we wear protective equipment — a specialized mask, goggles, gown — to make sure that we don’t become contaminated and end up with COVID-19 ourselves.

“If we get sick, then we’re not going to be able to take care of you guys.”

The chances of Martinsville and Henry County escaping the pandemic without any confirmed cases of the coronavirus is slim. There are two diagnosed cases in Danville and one in Franklin County as of Thursday, based on information released by the Virginia Department of Health.

“We have no confirmed cases, though I suspect we have the illness in town,” Favero said. “We are surrounded by confirmed cases to our north and south.”

Favero predicts the next two months could be difficult for Martinsville and Henry County.

“The lag in the curve is going to be several weeks — those potentially exposed last week are just starting to get symptoms, and then it will take them five to seven days to get a positive test, so you’re talking about a lag of two to three weeks,” Favero said. “So this social distancing, isolation, school closures is probably going to have to continue for four to six weeks at a minimum.”

Favero said Italy was estimated to be etymologically 11 days ahead of the U.S., and “they have just now started to see a slight decrease based on them basically shutting the country down two weeks ago.”

“We are very quickly approaching the number of patients infected that Italy has, and with the lag in testing and finding out results and people getting sick — they estimate that there are a lot more patients that will get sick with COVID-19.”

Meanwhile, Favero encouraged everyone to make the necessary changes to stay safe.

“My family typically gets together on the weekend, but this past weekend, we got together on a chat service and played a trivia game,” Favero said. “There was a family in New Jersey that got together, and one was exposed [to COVID-19]. The matriarch passed away as well as three out of four siblings — so don’t get together at this point — it’s not a good idea.”

WATCH NOW: Leaders at troubled nursing home in Stuart appear to be gone

Blue Ridge Therapy Connection's administrator, director of nursing appear to have left the long-term care facilty -- which cannot be reached either phone or email.

Those charged in death of former investigators wife are indicted.

Henry County will discuss return to classrooms at meet in Thursday.

Patrick County has the most deaths of the municipalities in the West Piedmont Health District.

Two men sentenced in guns, drugs cases, and another pleads guilty on an alcohol charge in Martinsville Circuit Court

Virginia Breeze Bus Lines picks up every morning and drops off every night.

Wrong kind of drive-thru: SUV crashes through back wall of historic restauran

Vehicle plows into Chicken in the Basket in Fieldale on Thursday morning.

Meet the Pickerals, whose newly built home is an example of growth in the housing market.

He had pleaded no contest to rape charges in Henry County and now has pleaded to similar charges with same girl in Martinsville.

Descriptions of the suspect differ wildly.

Dr. John Favero of Martinsville Family Medicine sits down for a live chat via Facebook about COVID-19 in Martinsville and Henry County.

Henry-Martinsville Health Department does not collect specimens for COVID-19 testing.