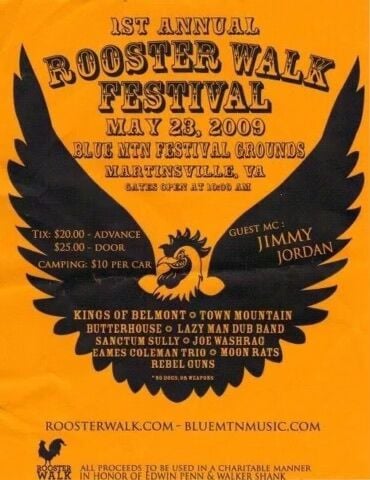 Jimmy Jordan was so well respected in the local music scene that his name was listed prominently on the poster for the first Rooster Walk festival, said festival organizer Johnny Buck. 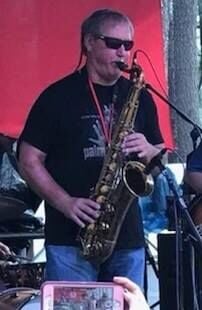 Martinsville dentist Dr. Jimmy Jordan, who died Wednesday at the age of 61, was renowned as a saxophone player and for his ability to organize successful music events. 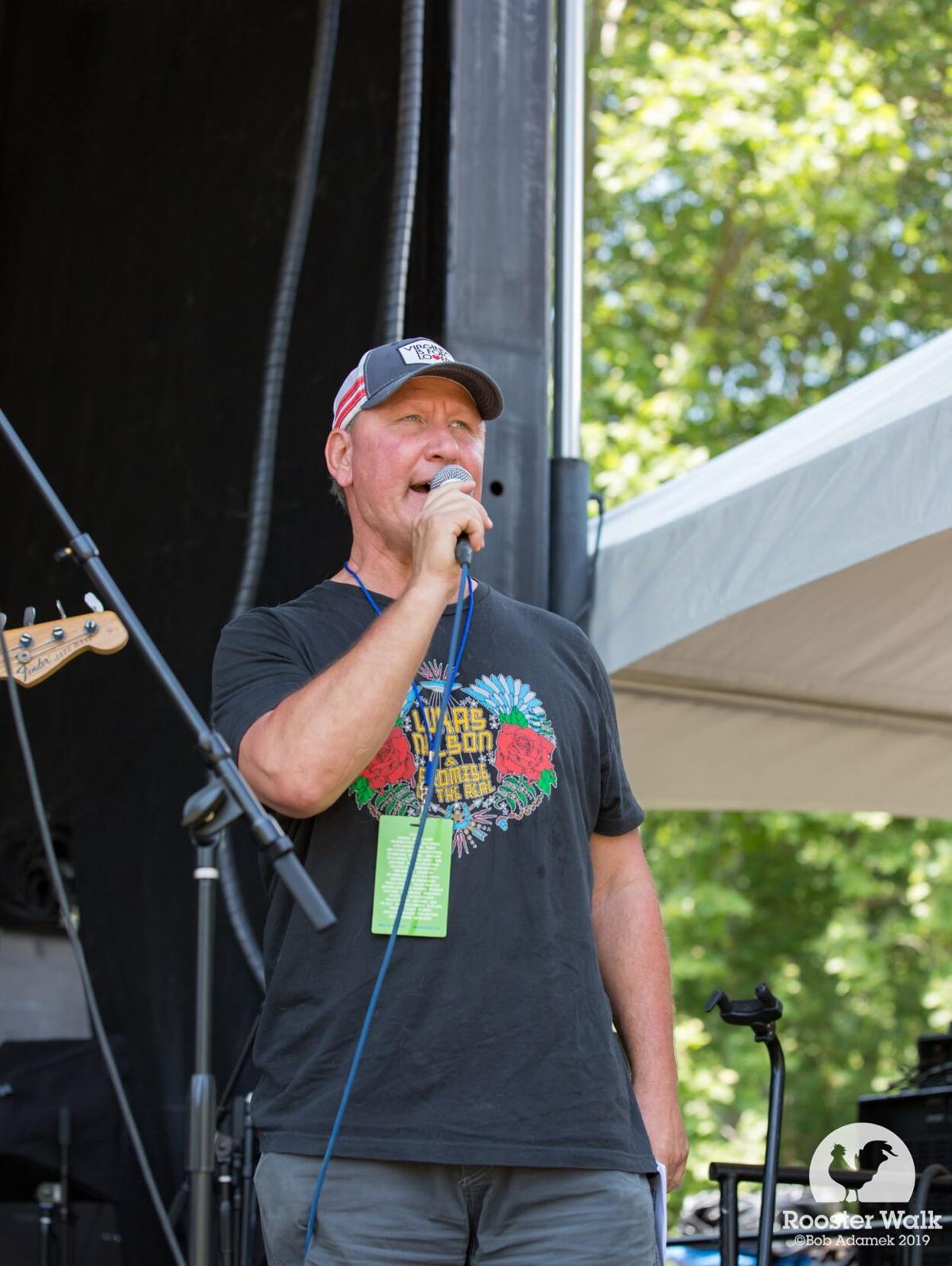 Martinsville dentist Jimmy Jordan, who died June 9 at the age of 61, was a talented saxophone player who was popular in the local music scene. Here he emcees for the Rooster Walk Music and Arts Festival.

The Martinsville dentist whose name was so synonymous with good music that it was used to promote the first Rooster Walk died Wednesday night at the age of 61 after battling COVID-19.

Dr. James A. “Jimmy” Jordan had a practice on Brookdale Street and also was active in local music. He had been sick for six or seven years before contracting the novel coronavirus.

“Jimmy’s commitment was always to his family, his friends and the community,” said Dean Johnston, a Martinsville High School classmate and supporter of Rooster Walk. “He was proud to set up a dental practice in his hometown.

“Needless to say, with the evolution of a music scene here in the area, and as a great musician, it was natural that he got involved with Rooster Walk and the Rives Theatre. I don’t know if anything made him happier, other than his family, than his time standing on stage and making music.”

He was an emcee at the Rooster Walk Music and Arts Festival for many years, said Rooster Walk founder Johnny Buck – “including that very first Rooster Walk. Back then, we were hoping that the community would embrace what we were trying to create, and Jimmy was on board from the get-go. We put him on the poster along with the bands, thinking maybe if folks saw that Jimmy was supporting it maybe they’d give it a chance.”

A “tremendous community leader and supporter of the arts,” Jordan had been a board member of Arts at the Rives and Piedmont Arts, Buck said. He had been a staff member of Rooster Walk for many years.

In the 1990s, Jordan helped Piedmont Arts select and bring in bands, Buck said. “He was a big part of revitalizing the live music scene in MHC back in the mid and late 2000s.”

In 1995, Jordan was instrumental in bringing the Acoustic Giants to Martinsville, through Piedmont Arts, Buck said. They were Bela Fleck, Tony Rice, Sam Bush, Jerry Douglas and Ronnie and Rickie Simpkins, playing music described as “new grass” and “farm jazz.”

The Acoustic Giants normally played only the large market and were expensive to bring to town, so Jordan and other community leaders pledge to cover any shortfall should one arise, Buck said. That show ended up selling out.

Jordan also hosted a number of public concerts at his Shining Star Farm in Henry County, including for Missy Raines, Buck said.

He has emceed for Floyd Fest, his brother, Carter Jordan of Texas and Meadows of Dan, said.

“If you asked him who, what, when or where about music, he knew everything about it,” Johnston said. “He turned me on to new grass revival in the ‘’70s and we ultimately have followed that genre of music and the musicians in that for 40 years. As important as music is to him, the type of music that is played traditionally at Rooster Walk and we had at the Rives was very much his genre of music.”

Jordan was a musician who could play anything after hearing it, Buck and Johnston said.

That “made him a very unique musician, to where it always seemed like he either was on the record or had been playing with the band forever,” Johnston said. “Jimmy had the ability to play in any band and fit in.”

Among his many bands, an early band he was in, “made of community leaders,” Johnston said, was The Secret Band. In recent year, Jordan has performed with Slick Jr. and the Reactors.

Jordan was a 1978 graduate of Martinsville High School, where he was the all-state linebacker and all-district running back, his brother said. He blocked for the first-team high school All-American Dennis Mahan, also of MHS’s Class of 1978.

When Jordan was playing football for the University of Richmond, he was the blocking fullback for Barry Redden, who was drafted for the L.A. Rams in 1982, he said.

Jimmy Jordan went to dental school at the Medical College of the University of Virginia.

In 1985, he went to work under Dr. Leon Lackey in the brick building on Church Street next to the present Papa’s Pizza, his brother said.

After at least a year working together, Jordan bought the practice from Lackey, his brother said.

“What a pure joy it has been to be one of his dental patients,” Mary Ann Wall said.

“He truly bubbled over with joy and enthusiasm as he did his dentistry. He replaced a crown and did a new one for me. These crowns are works of art! As he worked, it was like a musical performance. He hummed beautiful music as he worked.”

Virus in his system

Last year, Jordan sold his practice to a dental group, “which probably is a very good blessing,” his brother said. “If he hadn’t sold the practice, he would be in a world of hurt.”

He really enjoyed working as part of that group of 15 or 16 dentists, even though he wasn’t his own boss anymore, Jordan said.

Jimmy Jordan had been battling a type of non-Hodgkins lymphoma for more than six or seven years, his brother said, but “the downfall was the COVID.

“He had had this thing since February” but recuperated – or so he had thought, Carter Jordan said.

At the end of March, Jimmy Jordan wasn’t feeling well, and Carter Jordan took him to the hospital on April 1, he said – and there he had remained.

“They tested him even a week ago, and he still had remnants of the coronavirus in his system,” Jordan said. Even though he had tested negative after he had had it in February, “I don’t think he every got rid of it.”

In the day since his death, Carter Jordan said, countless people have called to tell him how much his brother had helped them on personal levels to overcome problems.

“He was one of the best human beings that I’ve ever known,” Buck said. “He was always optimistic and a shining – a bright, vibrant light, the kind that filled the room when he walked in.”

Editor's note: Date of the Acoustic Giants concert has been corrected.

An earlier version of this article stated incorrectly the date of a concert by the Acoustic Giants. The concert was staged on Oct. 15, 1995.

Jimmy Jordan was so well respected in the local music scene that his name was listed prominently on the poster for the first Rooster Walk festival, said festival organizer Johnny Buck.

Martinsville dentist Dr. Jimmy Jordan, who died Wednesday at the age of 61, was renowned as a saxophone player and for his ability to organize successful music events.

Martinsville dentist Jimmy Jordan, who died June 9 at the age of 61, was a talented saxophone player who was popular in the local music scene. Here he emcees for the Rooster Walk Music and Arts Festival.