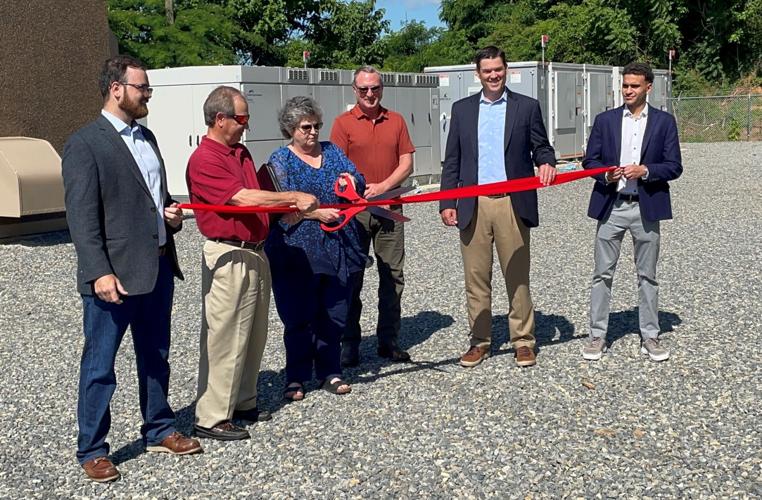 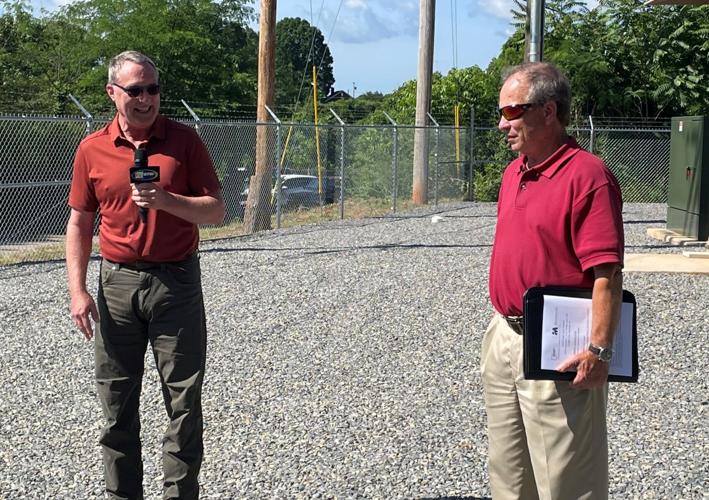 Durwin Joyce, left, and Leon Towarnicki both spoke to the amount of money that this project would make for the city and save for their utility customers. 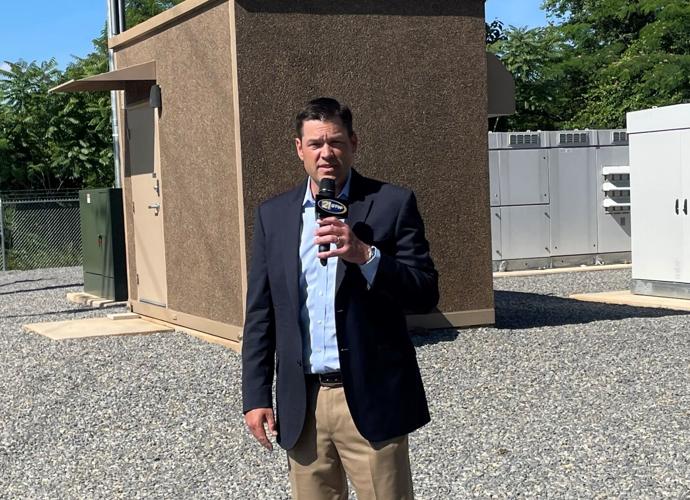 AEP Vice President of Asset Development and Origination Brian Whitlach said that the battery facility could power “the average U.S. household for a year and a half” or “about 12,000 homes for one hour.”

The City of Martinsville, partnered with American Electric Power (AEP), held a ribbon cutting ceremony at the site of the newly opened commercial battery storage facility at 132 Maple St.

“It’s such a unique project for the city and for AEP,” Martinsville City Manager Leon Towarnicki said. He added that this energy storage project was “put in kind of quietly” and has been operating for a couple weeks now.

Towarnicki said that this is a project that has been in development for years now and the plant site contains about $10 million worth of equipment.

“It’s a wonderful day today to recognize the partnership that the City of Martinsville has with AEP,” Mayor of Martinsville Kathy Lawson said. “We are very thankful that they have chosen us for this project because we have the perfect location to put it.”

“This will be a project that will help us in serving our utility customers in reducing their cost,” Lawson added. “Anything that we can do to utilize resources that cuts down the cost of that service, we’re going to do it … We’re very thankful for this partnership.”

The Bulletin was previously told that for the use of the property, Martinsville will receive 10% of the savings until the cost of the capital and investment have been recovered, and then the split will be half and half.

When the project plan was first completed, Wärtsilä Corporation Vice President of Energy Storage Optimization Andy Tang estimated that the project would create around a million dollars of savings for the city. However, GDS Associates Engineer and Consultant Garrett Cole gave a more conservative estimate.

Cole said that “revenue [to the city] is estimated to be $200,000 for a number of those years … The benefit over the life of the project should be $3.6 million.”

“We started on this in 2018,” Director of Martinsville City Electric Department Durwin Joyce said. “As the mayor said, anything that we can do to serve our customers and improve our rates as much as we can, we always have our eyes open.”

“We’re extremely honored to be partnered with this project,” AEP Vice President of Asset Development and Origination Brian Whitlach said. “Everybody in this community should be proud because there’s a lot of cities and towns and electric co-ops across the country that talk about doing projects like this, but Martinsville actually saw it to completion.”

Whitlach said that the project would be possible without their partners like Martinsville Utilities, GDS Associates and Wärtsilä Corporation who he said built the project.

Whitlach gave a brief rundown of the capacity of the batteries to put it into perspective, saying that on a single charge this facility could power “the average U.S. household for a year and a half” or “about 12,000 homes for one hour.”

“There’s a lot of power packed in what you see behind me,” he said about the facility. He also reference the powerful battery that powers Tesla cars, saying that to be equivalent to this facility there would need to be over 300 Model 3 Tesla cars.

“This is going to save the city money by reducing its peaks when the electric grid needs that power the most,” Whitlach added.

Towarnicki then explained further how the facility works. He said that at the core, the project is a big set of batteries that will charge at night when the cost is down and then during the day in peak periods the power goes into the grid as needed.

He said that through this facility and the expected improvements to charging and discharging of power through the batteries, there could be potential revenue of $3 to $6 million to the City of Martinsville over a 10 year period.

The battery facility is expected to have a life of at least 10 years, Towarnicki said, and then the city will reevaluate the energy storage project.

Martinsville and Wärtsilä Corporation made a deal for a commercial battery storage facility that is estimated to result in significant savings.

Drought causes French river to be crossable by foot

Durwin Joyce, left, and Leon Towarnicki both spoke to the amount of money that this project would make for the city and save for their utility customers.

AEP Vice President of Asset Development and Origination Brian Whitlach said that the battery facility could power “the average U.S. household for a year and a half” or “about 12,000 homes for one hour.”