The family of Evan (from left) and Gonzalo Vargas of Stuart hosted PHCC soccer players Igor Gonzalez, Jorge Mussi and Lucas Campos of Brazil for Christmas, since they could not be home with their families. 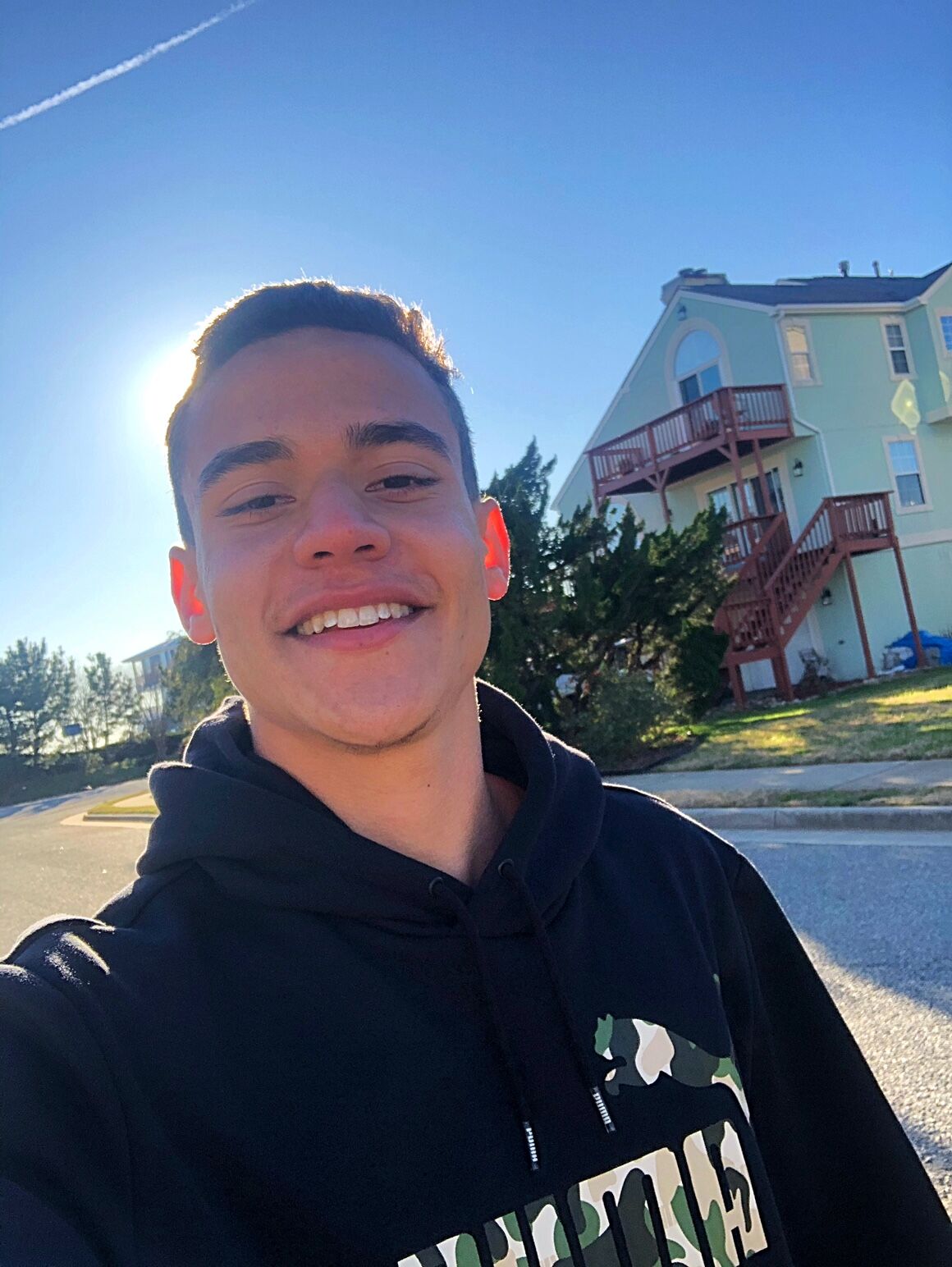 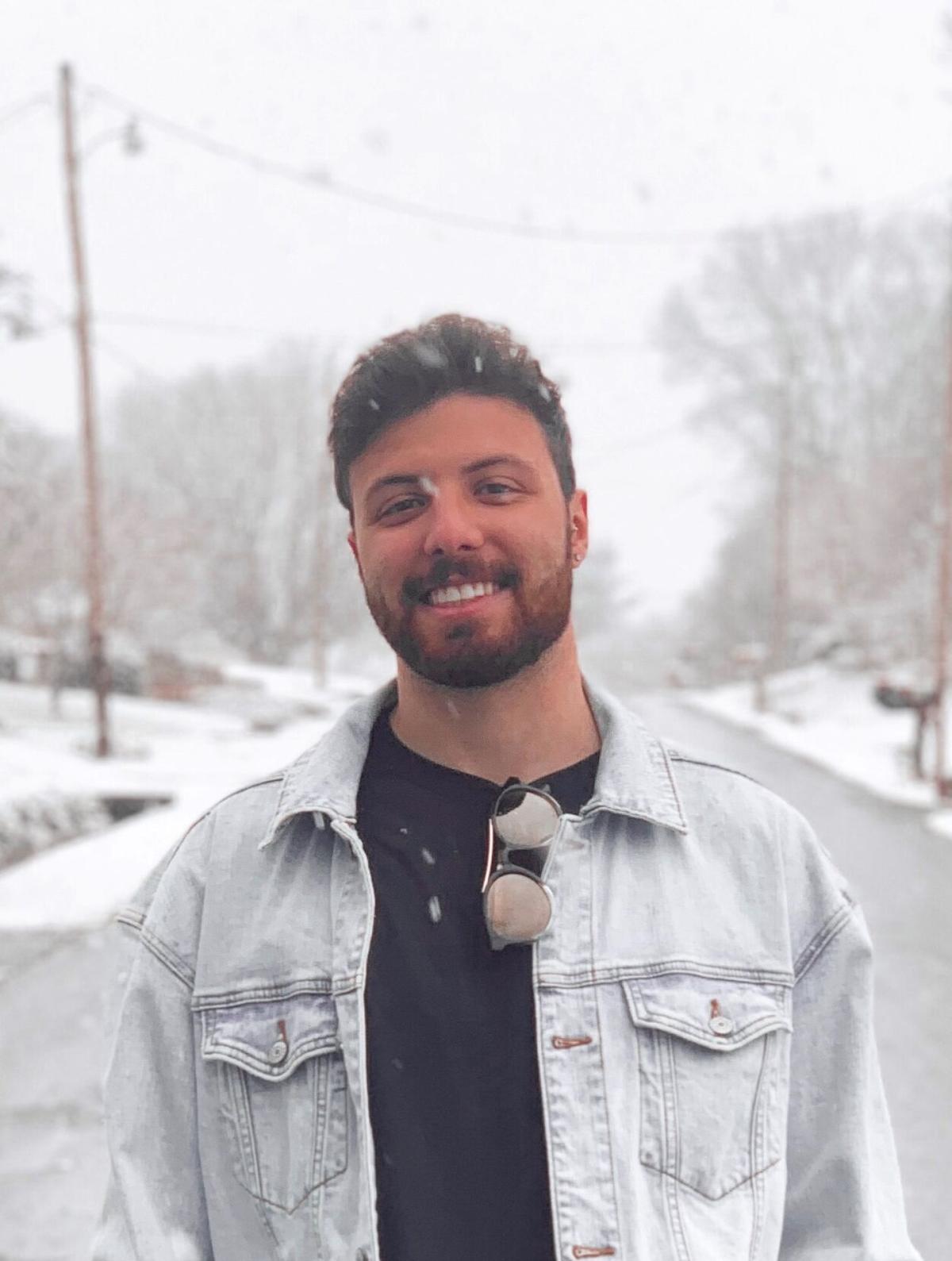 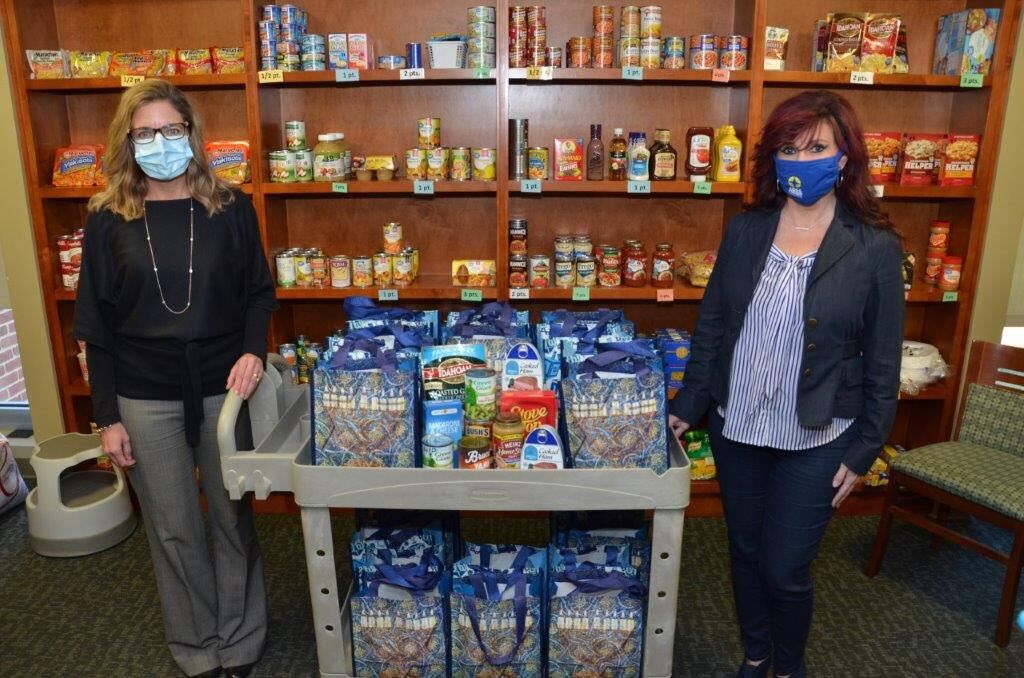 With PHCC Patriot Pantry donations to be given to to international students who did not get to go home over the holidays are Director of Development Tiffani Underwood and Student Success Director Christy Tilley.

International students at Patrick Henry Community College are starting back with classes, after getting through the holidays away from home with the help of friends and supporters.

Igor Gonzales and Jorge Mussi, both 20 and natives of Brazil, are finishing their sophomore years and final semesters at PHCC. They couldn’t travel because of the pandemic, so they spent Christmas with the family of their friend, Gonzalo Vargas of Stuart, and also received some provisions from the Patriot Pantry, supported with donations from the Henry County Rotary Club.

“They knew it would be hard for us” to spend the holidays away from home, he said, “so they thought they could do something to help us,” said Mussi, who plans to study civil engineering at university.

The Patriot Pantry, supported by Henry County Rotary, “helped us with a lot of food, a lot of gifts, a lot of hoodies” and PHCC-related items, he said.

Mussi said he came to PHCC in August 2019, recruited by Coach Brennan Murphy. He thought being a PHCC student would “combine things I love, studying and the soccer,” he said.

He returned to his family’s home in Brazil in early spring, when PHCC classes went online. It was great to be home with his family, he said, but “also really hard to come back here because Brazil had a lot of [coronavirus] cases, so the U.S. closed the border.”

On Aug. 1 he left Brazil to return to PHCC, but he had to quarantine in Mexico for 15 days first. He and a friend rode out their quarantine in Cancun.

It wasn’t the fun beach adventure everyone thinks when they hear Cancun, he said, because that would have been too expensive: He and the friend split “the cheapest” hotel room downtown that they could get.

For the winter break, he said was hoping to go home to spend Christmas with his family, “but because the borders didn’t open, I would have to quarantine again in Mexico. That would be expensive, so I decided to stay here, because otherwise I probably would not be able to come back here,” he said.

“That was the first time that I didn’t celebrate Christmas and New Year’s with my family.”

He missed the big celebration “with a lot of food and all the family getting together,” he said. The Christmas table in Brazil always has ham, sometimes has turkey and often has chicken, and there’s always rice, he said: “Remembering just now, I want to eat.”

They always have a Christmas tree, but it’s artificial, because the standard type of tree used for Christmas doesn’t grow in Brazil, he said.

Instead, “the first American that became my friend here,” Gonzalo Vargas, invited Mussi, Gonzalez and their roommate Lucas Campos to celebrate Christmas with his family in Stuart, he said.

“We celebrated Mexican-style, so it was very different for us, also very nice,” Gonzalez said. He said he talked with his family back home in Brazil regularly over the holidays.

On New Year’s Eve, Mussi said, the family would all dress in white, then go light firecrackers on the beach. He was able to use FaceTime to talk with his family, who are in a time zone 2 hours ahead of Virginia, so “midnight there was 10 p.m. here.”

Gonzalez, who also is in on PHCC’s soccer team and in his final semester as a student, plans to study business administration at university level.

The food package from the Patriot Pantry “was very helpful, because at the time we couldn’t be able to buy a lot of things … we received food, a hoodie, some basic stuff to help us,” Gonzalez said.

‘Just think of the blessing’

“I have heard that sometimes our international students do have a hard time making ends meet, and we do everything we can to help,” PHCC Student Success Center Director Christy Tilley wrote in an email.

It all started with an idea from Rotarian Jim Buckner, said Crystal Caldwell of the Henry County Rotary Club.

Bucknerread in the November issue of The Rotarian that a club in Scotland “made a large donation to several charities by using the money saved from what normally would be spent on club meals,” Caldwell said.

Thus inspired, “Rotary Club of Henry County decied to maek a generous donation to the food/supplies pantry at PHCC.

“COVID changed how we are meeting, thus reducing our spending on meals each week, and we are excited to use the effects of the pandemic for something good.”

It was Tilley who suggested helping tide the international students over during the break, Caldwell said.

The club donated $500 to the Patriots Pantry and also made a $500 donation to the Salvation Army, she said.

The club continues collecting donations for the cause. Checks can be mailed to P.O. Box 906, Collinsville, 24078.

“Most of us would normally spend a great deal of money on meals while dining out,” Caldwell said. “The club continues to challenge each member, and beyond, to make a donation in the amount of monthly meal charges. Just think of the blessing that we can all be if we continue to buy meals but direct them towards those in our community who may have a stronger need. Please consider your donation and continue to be a blessing.”

Harbor Freight tools up for a spring opening in Martinsville

It takes over former OfficeMax space on Commonwealth Boulevard.

Despite the pandemic, the 2021 Historic Garden Week tour will go on -- with adaptations.

The family of Evan (from left) and Gonzalo Vargas of Stuart hosted PHCC soccer players Igor Gonzalez, Jorge Mussi and Lucas Campos of Brazil for Christmas, since they could not be home with their families.

With PHCC Patriot Pantry donations to be given to to international students who did not get to go home over the holidays are Director of Development Tiffani Underwood and Student Success Director Christy Tilley.