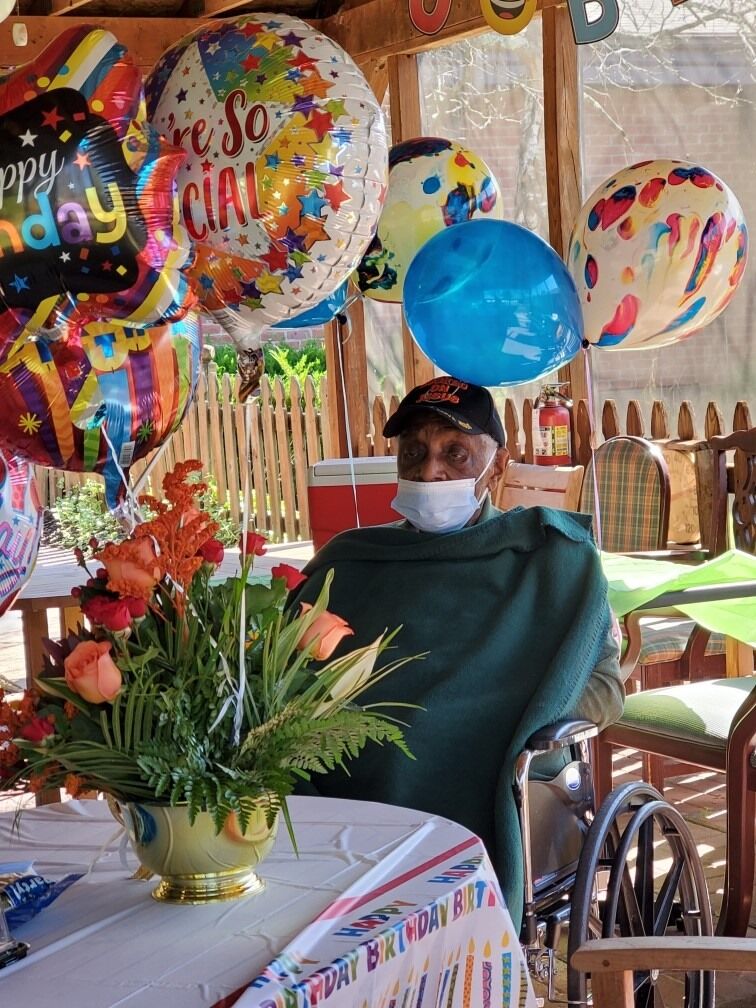 Raymond Ross of Stanleytown Health and Rehab on his 108th birthday. He died Sunday at the age of 109, the oldest known resident of the area. 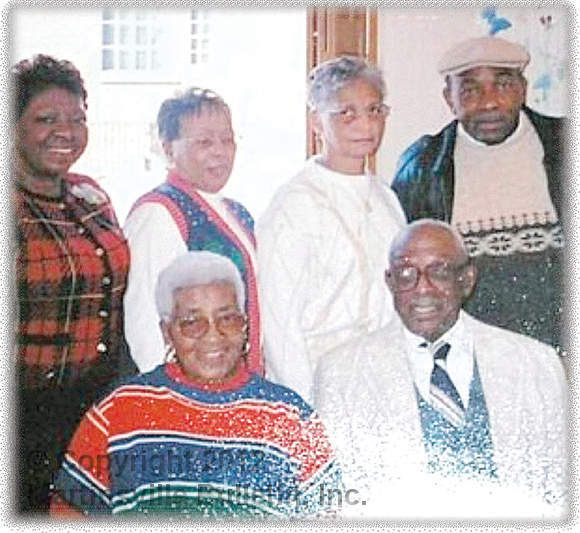 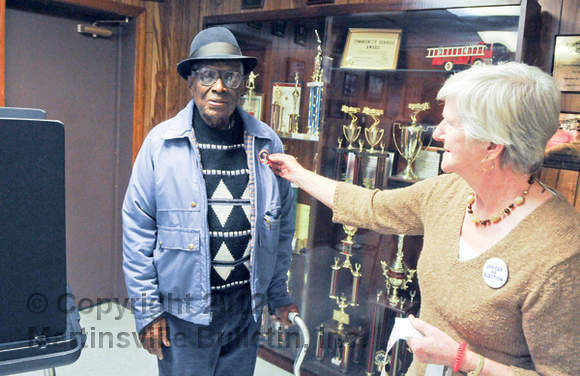 At the vote he cast when he was 100 years old, Belva Mays gives him an “I Voted” sticker. Ross voted for only the second time in his life that day. 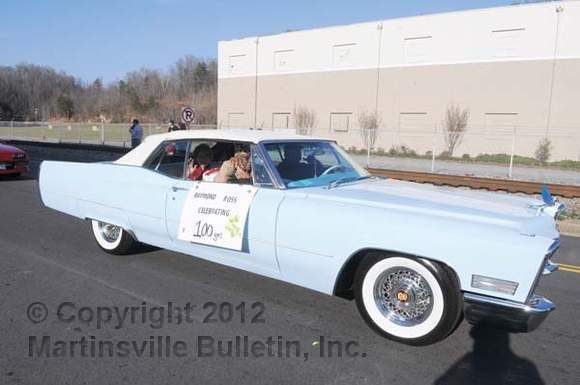 During a Bassett parade, Raymond Ross, then 100, rode in a restored 1967 Cadillac owned by Herman Moore. 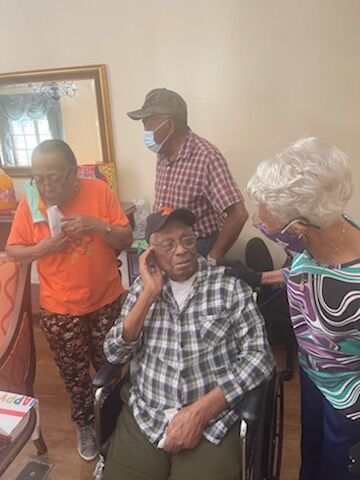 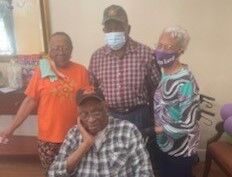 His 109th birthday had been celebrated with a party last month with a few family members and friends at Stanleytown Health and Rehab, where he lived.

George Raymond Ross was born on Oct. 10, 1912, to Harden and Mattie Ross in Philpott. He was the fourth in a family of seven girls and four boys.

“Granddaddy was a quite man, but he enjoyed watching television shows like Hee Haw, Sanford and Son and Wheel of Fortune,” said his granddaughter Pamela Griffin by email. “He enjoyed listening to the radio” and “he loved to travel and driving was never an issue through any weather.

“Numerous times we’d have to stop in the snow for him to get the snow chains out of the trunk of the vehicle and put them on the tires.”

Ross went to work at Philpott Brothers sawmill when he was 14 and, his daughter, said he was paid 10 cents an hour.

Before Ross retired at age 62 he had helped build the Philpott Dam and worked at the J.D. Bassett Furniture factory for more than 30 years.

“Some of the family nicknamed him MacGyver because he would work on anything; the pump house, cars, helping to build the shed and additions to the house,” Griffin said. “He would get upset with us children, but never used profanity.

“Without a doubt he loved his family.”

Ross was married to his wife, Flossie, for 72 years until she passed away in 2006.

Jones had said Ross loved to take them on vacation to visit his sisters in West Virginia and New York.

“I have had many dear friends,” said Ross on his 102nd birthday, but acknowledged he had outlived most of them.

William Howard Taft was the president when he was born.

On his 100th birthday, his daughter, the late Helen Jones, told the Bulletin that it wasn’t her father’s style to argue about politics.

He “is very active, but he’s a man of few words,” said Jones, adding that his conservative nature that might have been a key to his longevity.

In the last few years before his death he told the family he would like to have a cellphone.

“He was amazed by the new technology and was really interested in the concept of how it works,” Griffin said. “On several of my visits he’d joke that he wanted to keep the phone, but I would need to show him how to use it.”

His advice to young people was simple: accept Christ as their savior, live by the Ten Commandments and respect the elderly.

“I never heard him say ‘I love you,’ he would always respond with ‘you too.’” said Griffin. “Those were the last words I heard from him.

Funeral arrangements are pending and will be announced by Hairston Funeral Home.

Police and rescue were called to the scene of a vehicle crash Sunday morning shortly before 10 a.m. on the Dye Plant Road in Martinsville.

A Fieldale man has died of a gunshot wound, and police are looking for a Martinsville man in relation to the Saturday night shooting.

The Bulletin has moved to the heart of uptown Martinsville, and longtime newsroom employee Holly Kozelsky is now the newspaper's editor.

Raymond Ross of Stanleytown Health and Rehab on his 108th birthday. He died Sunday at the age of 109, the oldest known resident of the area.

At the vote he cast when he was 100 years old, Belva Mays gives him an “I Voted” sticker. Ross voted for only the second time in his life that day.

During a Bassett parade, Raymond Ross, then 100, rode in a restored 1967 Cadillac owned by Herman Moore.