Problems at Blue Ridge Rehab Center, Blue Ridge Manor are more than unpaid bills
0 comments
Share this
Only $5 for 5 months

The financial problems that have forced Blue Ridge Manor Nursing Home and Blue Ridge Rehab into receivership are far from the only concerns being addressed at the two facilities.

The state has cited dozens of deficiencies and violations during recent years, ranging from tending to patients’ specific needs, to levels of staffing, to maintenance of the facilities, to making sure that temperatures aren’t too hot for the hundreds of aging, fragile and infirmed who live there or visit there for treatment.

The number of health violations cited at the facilities slightly outpaces state averages for nursing homes.

And some who have been inside the doors of these facilities describe horrible scenes of neglect and disregard that paint an even more troubling picture of care for those who require assisted living and rehab.

Kissito has an agreement to manage those facilities during the receivership, and, McClintic said, Kissito is seeking to become the permanent licensed operator of the two facilities in a lease arrangement with Omega. The court must approve that.

On Feb. 25, the plaintiffs, among others, terminated the master lease for Blue Ridge, and the defendants have said they do not have the financial ability to continue operating and could not meet their obligation for the payroll that was due on June 2.

Greer will hear from the receiver about next steps in a court hearing scheduled for Tuesday.

Blue Ridge Rehab Center originally was licensed as Commonwealth Health Center, but in 1987 Blue Ridge Nursing Center of Martinsville and Henry County was licensed with 182 beds.

The state’s inspection reports that were reviewed, dating back to 2017, detail issues that ranged from condition of facilities, to resident care, record-keeping and required documentation, medication issues, level of staffing, safety, violation of residents’ privacy and financial solvency, among others.

The facilities then submitted required plans on how they had or would promptly correct the issues and prevent them from happening again.

Cletisha Lovelace, a spokesperson for the Virginia Department of Social Services, said conditions at Blue Ridge Manor “have not deteriorated.

“The physical plant and overall conditions for the residents residing in the assisted-living facility have not been cited with any severity in recent inspections,” she wrote in an email.

There is much to be examined about the services provided by these facilities. Some reports are more recent, and the data at times is broad-brushed. Still there are specifics that provide insight about Blue Ridge Rehab Center:

‘The place is nasty’

Some who have been inside the doors of Blue Ridge Manor and Blue Ride Rehab describe ugly and “awful” conditions under which residents are cared.

Two people spoke to the Bulletin about what they had witnessed. The Bulletin has verified their identities, but those names are being withheld because of feared repercussions.

One resident even said she feared the possibility of lease termination after an administrator indicated to her she would get in big trouble if she told her name publicly in expressing her concerns. Other residents contacted directly by the Bulletin or through an intermediary did not respond.

One woman told the Bulletin said she has lived at Blue Ridge Manor for several years. She said her monthly rent/fee is $4,300.

“It’s awful,” she said. “We have people in Blue Ridge Manor that have severe dementia and some have severe Alzheimer’s. They are supposed to be in a nursing home, not in an assisted-living facility. They require one hundred percent care. She said a number of residents need direct care of two employees at times, and when that happens, there’s not enough staff available to help other residents who may need help.

“The place is nasty. My bathroom has never been cleaned. ... My toilet has yet to see Clorox,” she said. “They do spray deodorizer in rooms and bathrooms and halls.”

She said things have broken and they were not fixed or not fixed in a timely manner. “The refrigerator in the kitchen is broken again. … Two exhaust fans on the roof, one has been broken for three years. That’s ridiculous,” she said.

“I have shed tears here. I allowed myself to be hoodwinked,” she said. “It’s a nightmare I could never have imagined.”

Said Lovelace: “Based on the most recent inspections, staff-to-resident ratio has not been reduced, and payroll for all employees of the assisted living facility is up to date.”

An Axton man who said he has visited Blue Grass Rehab Center on an ongoing basis for years to bring cheer to the residents said he has seen people still in wet clothes, smelly, with stains where they used the bathroom on themselves. “It’s horrible,” he said.

In some areas of the facility, he said, “the smell would about knock you down.”

Those descriptions match details in some violations noted in state inspection reports, but Kim Beazley, deputy director of the Virginia Department of Health’s Office of Licensure and Certification, wrote in an email that survey [inspection] reports for Blue Ridge Rehab Center indicate “the facility has not been cited for any substandard quality of care or quality of life issues in the last five years.

“The facility is required to maintain compliance with all local, state and federal regulations. At this time, we anticipate the facility continuing operations.

“Services are continuing to be provided under the management of the appointed receiver and operator.”

The issues faced by the facilities are both immediate and long-term. Court documents reveal that the skilled nursing facility is at risk of losing its local business license. Because of a broken walk-in refrigerator required renting a refrigerator outside the building, Medicare regulations were violated. Vendors placed the facility on a cash-on-a delivery payment system because of defaults on accounts.

McClintic said that his company is working to make improvements, for example making sure vendors are paid timely and that they are providing supplies, establishing relationships.

He said Kissito has increased the staff at Blue Ridge Rehab Center to make sure residents are being cared for, but he couldn’t say how many employees have been hired.

He said he feels “the biggest need is at Blue Ridge Rehab Center. We want to improve staffing, improve care … [do] physical plant improvements. We’re in this for the long run.”

He also said Kissito is focusing on improving air conditioning so that it will work more efficiently. A walk-in freezer will be replaced. It is on order and will be replaced in a couple of weeks. Painting, furniture and carpet are some of the other improvements planned, he said.

“It needs some TLC [tender loving care],” he said. “We want to provide great quality care.”

Court-appointed receiver wants a judge to fine owners of Blue Ridge Rehab and Blue Ridge Manor in Martinsville for not providing requested information.

A judge went even further than requested on Tuesday in holding the owners of a troubled nursing home and rehab facility in contempt of court.

Blue Ridge Rehab’s temporary manager, Kissito, soon will take over on a permanent basis – and give the facility a $3 million upgrade.

Blue Ridge Rehab in Martinsville was put under the court's control. 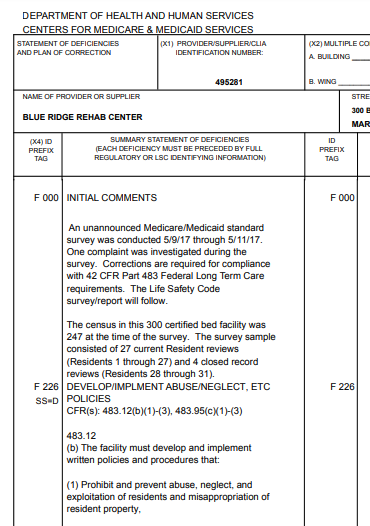 A review of inspection reports about Blue Ridge Rehab and Blue Ridge Manor for the past few years show numerous violations. Page A10