COVID-19 has equaled its deadliest day in the West Piedmont Health District.

There were 10 deaths revealed on Thursday, matching the record set on Sept. 15. The next highest total is seven, from August.

There also were 109 new cases, the second consecutive day of a spike in the district, and four new hospitalizations as the virus re-emerged from some quieter days earlier this week.

The Virginia Department of Health included the deaths – five in Henry County, four in Martinsville and one in Franklin County – in its report Thursday morning.

But those deaths could’ve occurred any time in the past few weeks, because VDH typically waits for death certificates to confirm cause of death.

But that means that 73 residents of Henry County, 36 from Martinsville and 33 from Franklin County have succumbed to the novel coronavirus, and there have been 170 when Patrick County is included.

We also don’t have much information about these victims, although VDH tracks all statistics by a person’s residence.

Kelly Fitzgerald, spokesperson for Sovah-Martinsville, said that there were limits on the information she could share because of patient confidentiality rules.

“We can share that the acuity of patients we have been diagnosing and treating with COVID-19 in recent weeks has been more severe,” she said in an email. “According to our Chief Medical Officer (CMO) Dr. Sheranda Gunn-Nolan, this local trend is consistent with other areas of the country and state.”

Nancy Bell, spokesperson for the health district, said Thursday, after consulting with epidemiology staff, that there were a couple of reasons for the surge.

“Three of the deaths are the result of vital record updates, which is part of the ongoing review of vital records death certificate data by the VDH central offices,” Bell wrote in an email late Thursday.

“Seven of the cases are associated with three recently identified outbreaks in long-term care facilities during the months of December and January.”

The most recent such outbreak is at the Mulberry Creek Nursing & Rehab, where 119 associated cases have been cited among residents and staff. The VDH database that tracks outbreaks in such facilities noted there had been deaths, but that count has been undisclosed because the VDH does not post a number until the total surpassed two or three because of concerns for privacy.

Martinsville Health & Rehab has 19 cases and an undisclosed few deaths, too. There were two other outbreaks in the district in December that were closed earlier this month.

The 109 new cases made 234 in the past two days in the district, and there were four new hospitalizations.

Positivity in the district also has crept up. There have been about 600 new tests conducted since Tuesday, and the positive rate is 17.8% on 54,299 tests, up from 16.6% on Tuesday.

By comparison, the Pittsylvania-Danville Health District – which has had 7,566 cases and 110 deaths, has a 17.5% positivity rate.

How to get info on signing up for the vaccine

INFORMATION ON PAPER: At the health departments, public libraries, municipal buildings and chambers of commerce in Martinsville, Stuart and Rocky Mount.

WHO IS COVERED: Phase 1b applies to all citizens who are 65 or older, those who are 18-64 with specific health conditions and those in fields of employment that require public interaction, such as law enforcement, firefighters, teachers, restaurant workers and others. Detailed definitions of phases and priorities are at www.vdh.virginia.gov/covid-19-vaccine/ 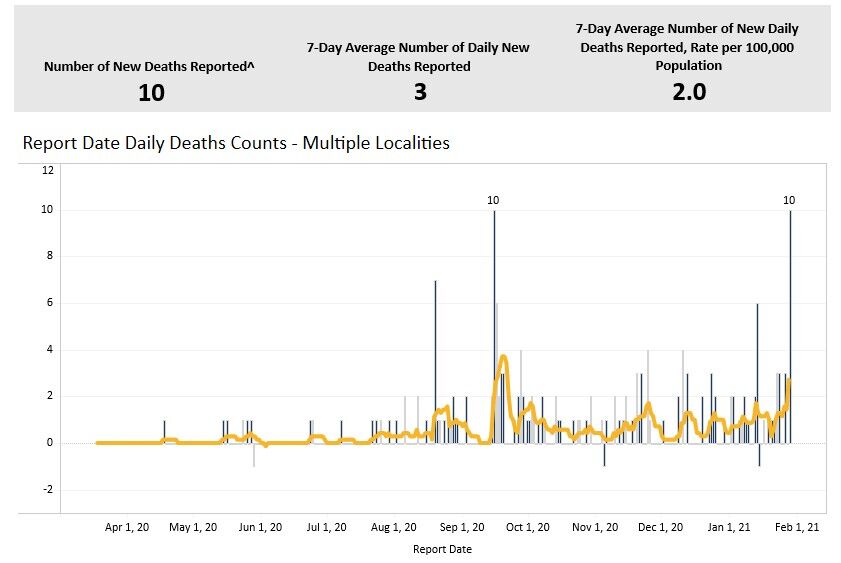 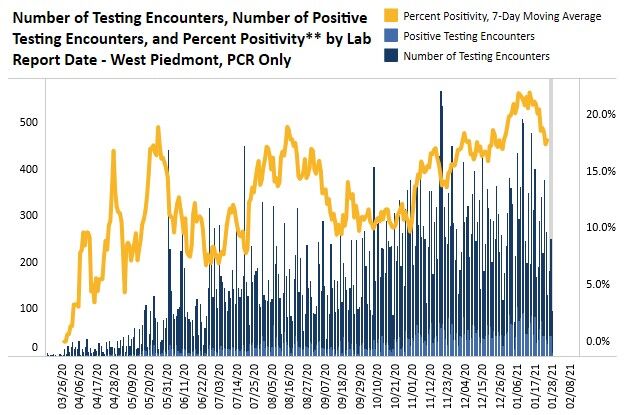 How testing has risen and fallen.