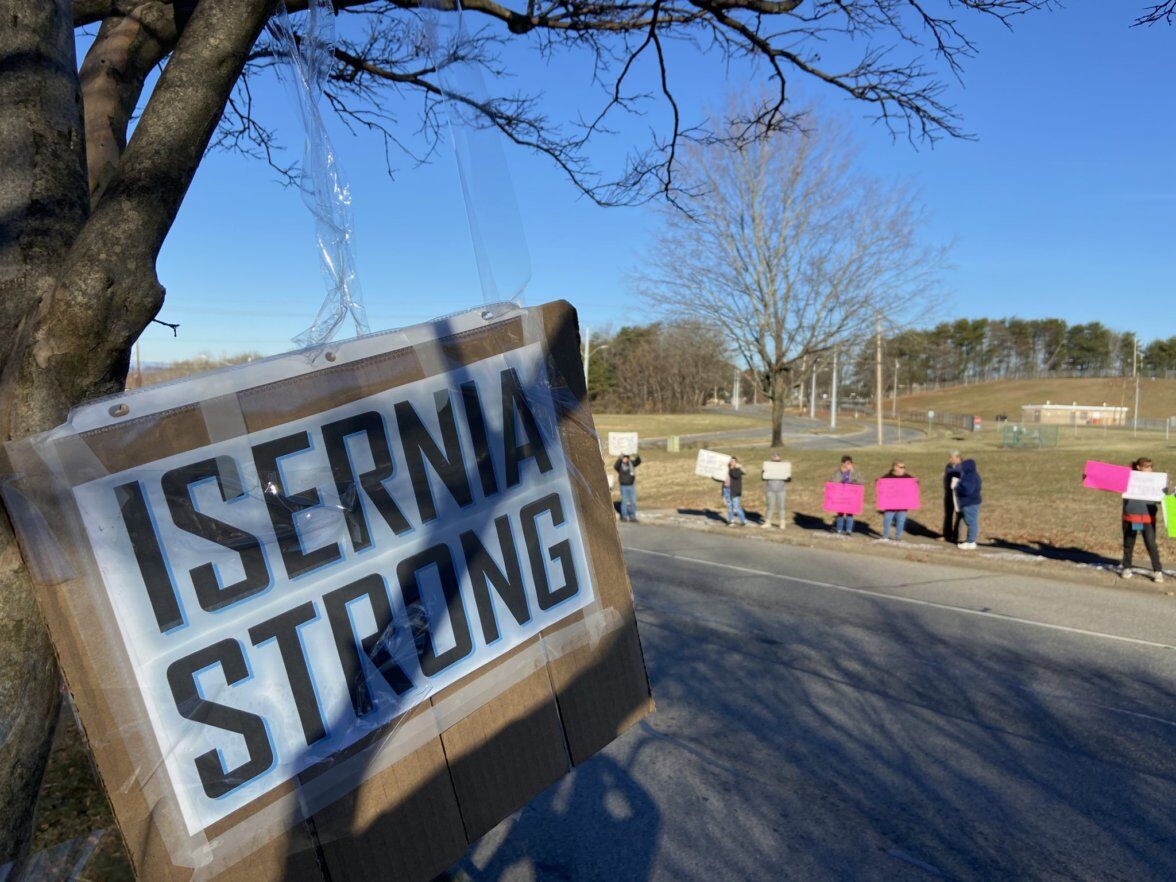 A sign in the median on Commonwealth Boulevard reads “Isernia Strong” in support of Dr. Isernia who was recently dismissed by Sovah Health. 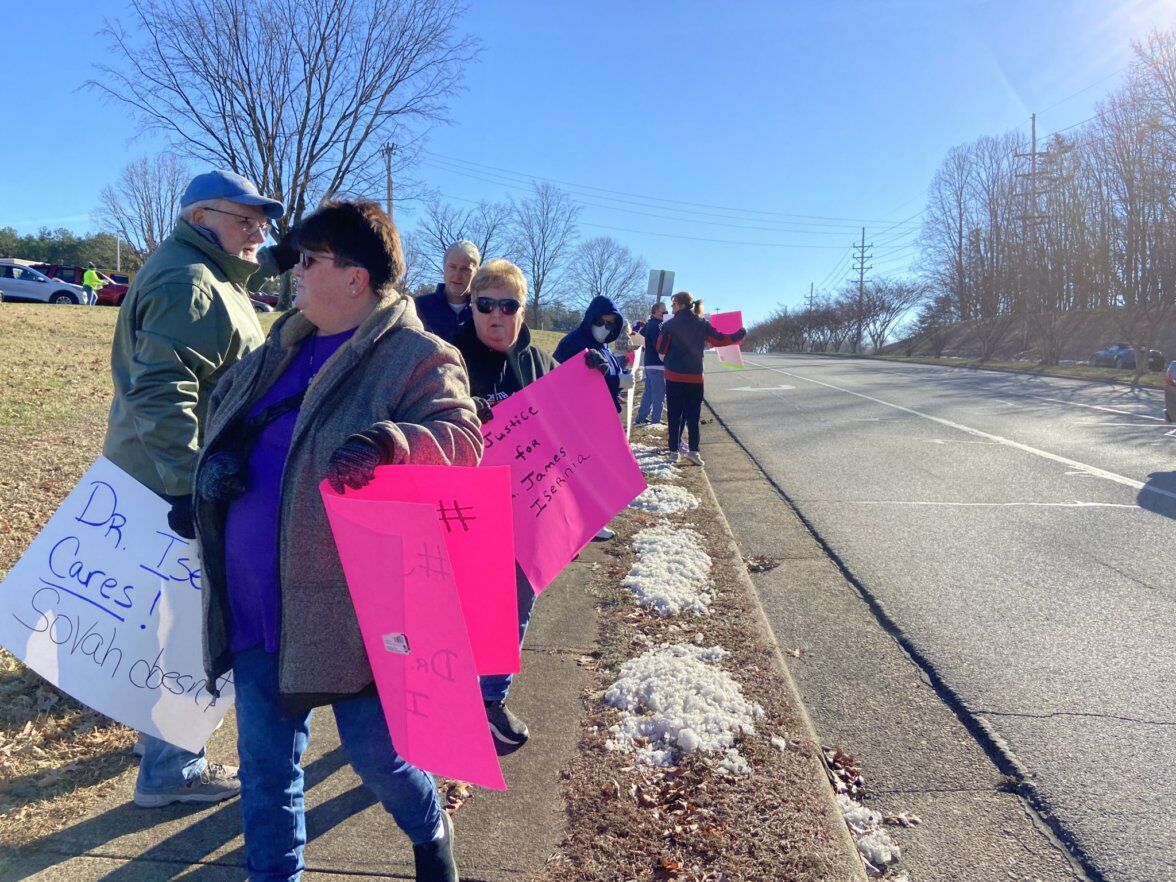 Supporters of Dr. James Isernia rally together along Commonwealth Boulevard near Hospital Drive. 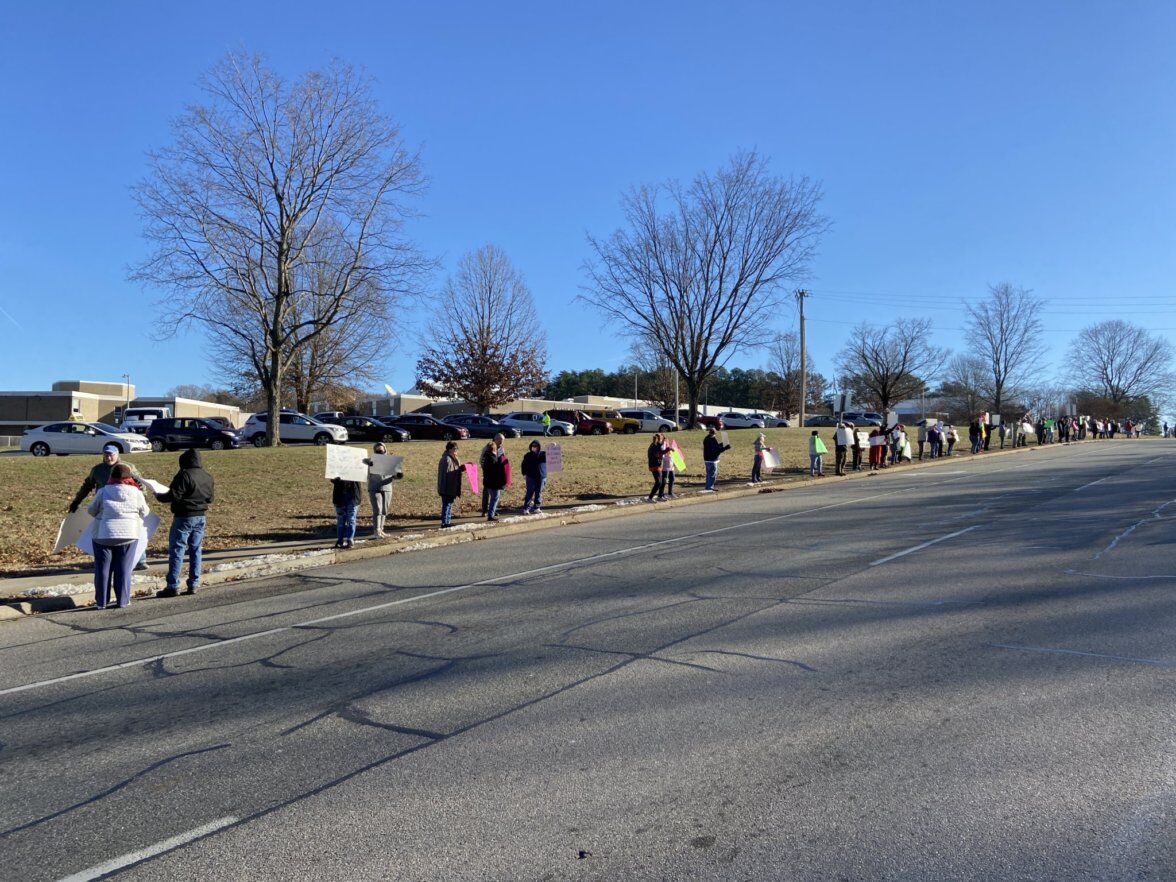 About 60 people participated in a rally for Dr. James Isernia Saturday morning on Commonwealth Boulevard. 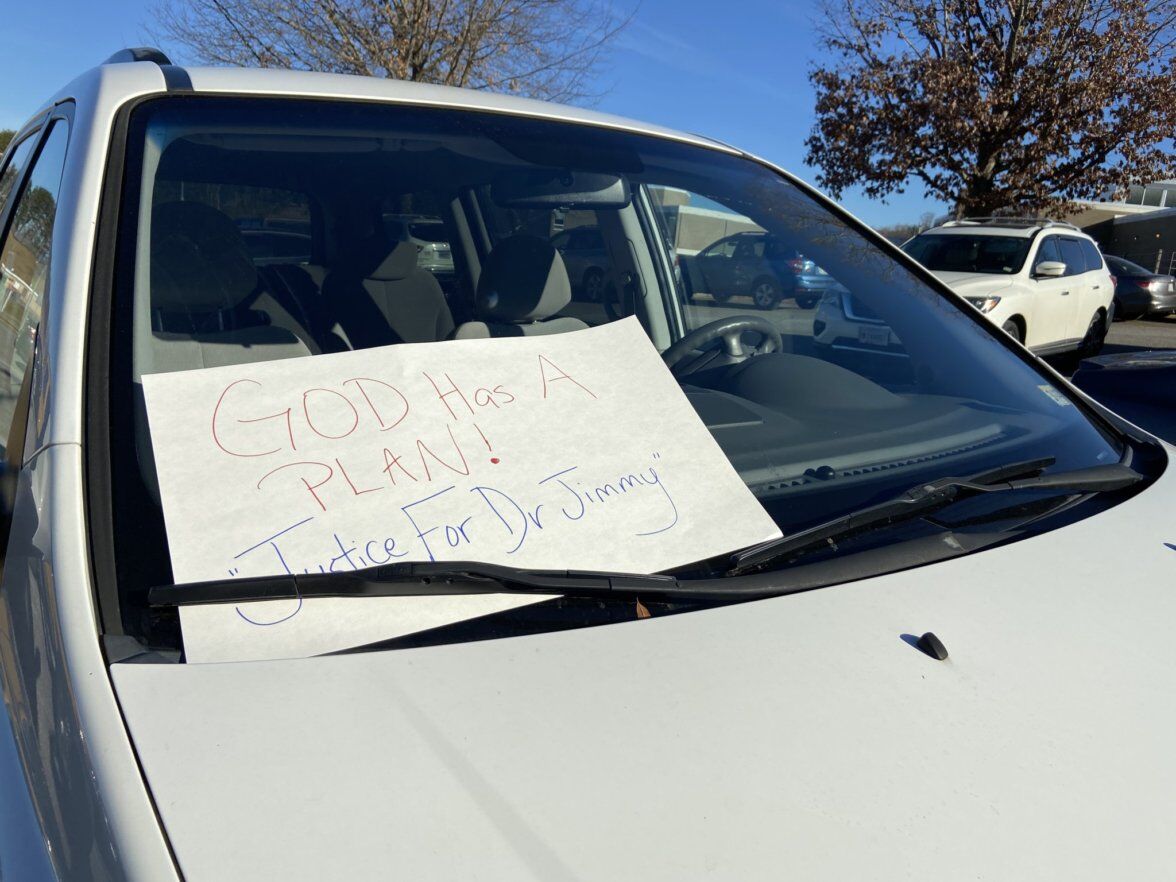 Some of the vehicles in the Martinsville high school parking lot sported signs in support of Dr. James Isernia. 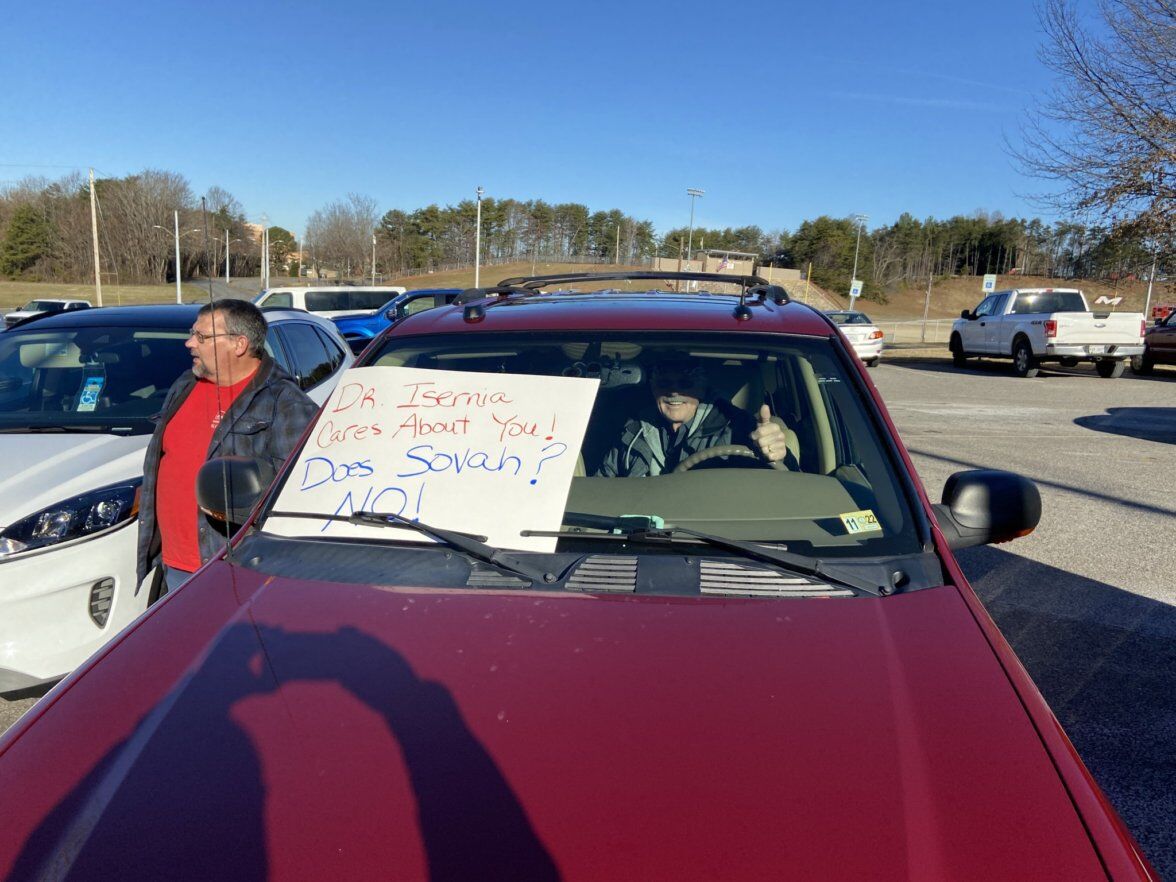 Some people attended the rally, but remained in their cars with signs supporting Dr. James Isernia.

Little is known about the apparent dismissal of Dr. James Isernia by Sovah Health, but on a frigid Saturday morning with the temperature in the 20’s, about 60 people with signs supporting the Martinsville doctor rallied along Commonwealth Boulevard near Hospital Drive.

As well as expressing concern for his welfare, his patients say they have not been able to get prescriptions for medicines they need refilled and are worried about being set adrift in terms of health care.

“I’ve lived in Martinsville since 1968,” said Woody McCain, a retired educator. “Dr. Scouras was my doctor until he retired and after that I’ve been seeing Dr. Isernia, so basically I’ve only had two doctors in all that time.”

Another of Isernia’s patients, Trina Wells, created a private Facebook group called “JusticeForDrJimmy,” which has more than 1,300 members.

“Our goal today was to get Sovah’s attention,” said Wells. “They terminated our doctor without a plan in place, and now you have over 1,000 people without a physician and without being able to get refills for blood pressure meds or diabetic medications.

“You have no idea how many people are reaching out to me personally crying and not knowing what to do for themselves or family members that are in need.”

Trina’s husband, Roger Wells, waived a flag behind the line of people with signs.

“We really don’t know what the hospital claims he has done wrong,” Wells said.

Hospital officials would not comment to the Bulletin about Isernia, but Sovah Marketing Coordinator Hailey Fowlkes did issue a statement:

“Dr. Isernia is no longer practicing at Sovah Internal Medicine. We appreciate Dr. Isernia’s many years of service to our organization and community and we wish him the best going forward.

“Due to the confidential nature of our relationships with physicians and as this is a personnel matter, we will not be discussing the specifics of his departure.”

Isernia declined to comment when first approached by the Bulletin, but around 5 p.m. Saturday he sent a statement thanking patients and friends for their support. He wrote that he and his wife had driven by the rally and were touched by what they saw.

At the rally, McCain walked along the line of people along Commonwealth Boulevard Saturday morning and encouraged them to spread out a little.

“Let’s make this line reach from Hospital Drive all the way to Fairy Street,” McCain said. “We want to make it look as big as possible.”

“This hospital has separated these patients from their doctor without any notice and did so without making any provisions for their care,” McCain said. “It’s just not right.”

More than a dozen people told the Bulletin that they were left in the lurch without being able to get needed medications continued, but they did not want their names to be used in an article out of concerns for their medical privacy. Several told the Bulletin that the hospital had told them a replacement physician would get in touch with them to make plans for continued care, but they had not received any calls or messages from any other doctors.

Debra Nunley of Bassett said her husband went to the rally. She talked with the Bulletin by phone Saturday afternoon.

“I have no doctor” now, she said. “I can’t get refills on my medications. My whole family is Dr. Isernia’s patients.” She said she takes blood pressure medications and anti-depressants, and “my husband is basically the same, except he gets a narcotic.”

She said she is worried how she would be able to continue a medication that runs out on Jan. 22. Another one has four refills, but she doubts now that any pharmacy would refill it.

Meanwhile, Nunley said, she is searching for answers to no avail.

“We can’t get anyone to call us back” to give information on how they can get their health care continued, she said.

“I’ve called Sovah headquarters in Tennessee and I was told my calls would not be returned and to call Dr. Isernia’s office and somebody would answer your calls and help you out. That’s not true.”

Nunley also called around to several local doctors, with no success: Either “there’s a waiting list, or some doctors are not taking new patients.”

She said she thinks the hospital took action “without thinking it through. They left patients basically on their own without the support of another doctor where they could get their medications. Some people are going through withdrawal symptoms. Others cannot get their basic diabetes or blood pressure medications. It’s just an absolute nightmare.”

In May 2020, a Consent Order was filed by the Virginia Board of Medicine stating Isernia “violated Virginia Code ... and the Board’s Regulations Governing the Prescribing of Opioids and Buprenorphine” from March 2017 through January 2019, regarding prescriptions of oxycodone, methadone and alprazolam to “Patient A.”

It also listed violations “with regard to his care, treatment, and continuous prescribing of opioids and benzodiazepines to Patients B, C, and D, while failing to satisfy provisions of the Board’s Prescribing Regulations.”

The document stated that Isernia was reprimanded and ordered to submit an assertion that he agrees to comply with regulations and to complete continuing medical education on “proper prescribing of controlled substances, pain management, and opioid addiction.”

A letter from Virginia Board of Medicine Dr. William L. Harp, dated July 31, 2020, filed with the Board, stated that the Board had received verification of Isernia’s compliance with the Consent Order and that the board terminated terms and conditions placed on his medical license.

James Isernia, 53, is a 1993 graduate of State University of New York Downstate Medical Center College of Medicine 1993 and has over 29 years of experience in the medical field.

In addition to having been a Sovah Health hospitalist, he also serves as the jail physician for the Martinsville and Henry County jails.

“We want to thank our patients, friends and family and every single patient falls under each of these categories,” Isernia wrote in his Saturday statement. “Being blessed to have served this community for more than 25 years, it’s more than just a patient/doctor relationship to us ... we have been completely overwhelmed by the love, prayers and support. Patients have called to pray with us, send devotions, send out love and prayers.

“We were traveling to see a patient and good friend in hospice on Saturday. We had to ride past the support rally. We were able to slow down, actually see each face, hear their shouts and as my wife and I drove past, tears streaming down our faces with gratitude as we tried to say thank you. Words wouldn’t form. They wouldn’t come. Only tears.

“Please know that we are fighting hard to get back on our feet, to get back to the patients, to try to pick up the pieces for both them and ourselves.

“Our silence has been out of legality, nothing more. We understand the difficulty in not knowing and understanding. Honestly, we don’t quite understand it.

“Thank you for supporting us even through everyone’s silence. Praying to see each of you soon. Love and such heartfelt gratitude to each and every one of you.”

Michelle Isernia had told the Bulletin before the statement was issued that her husband’s side of the story would be told soon enough.

“We will as soon as legal approves us to do so,” she said. “Right now all I can say is our patients have and always will come first and our silence is as much to protect them as it is us.

“Just don’t believe everything you hear.”

U.S. athletes told to use burner phones at Winter Olympics in Beijing

U.S. athletes told to use burner phones at Winter Olympics in Beijing 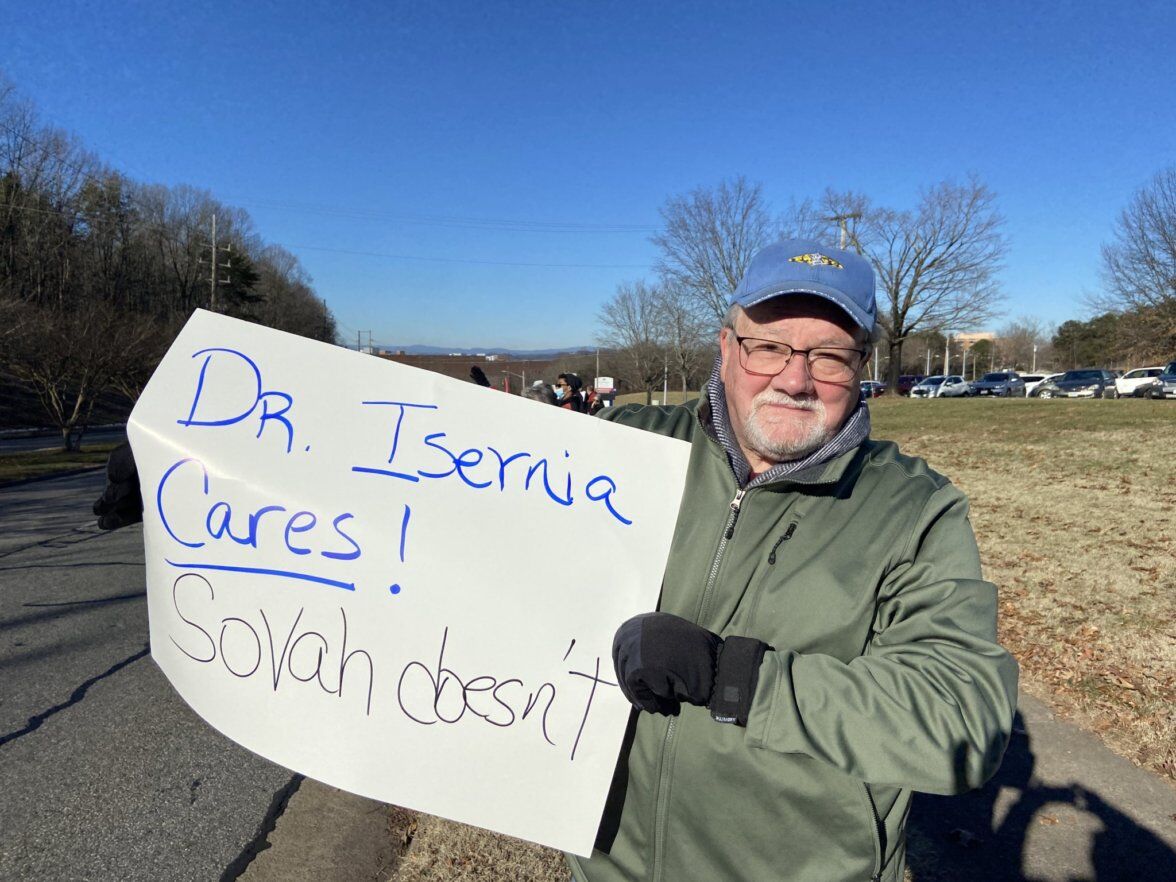 Woody McCain takes part in a rally of support for Dr. Isernia.

A sign in the median on Commonwealth Boulevard reads “Isernia Strong” in support of Dr. Isernia who was recently dismissed by Sovah Health. 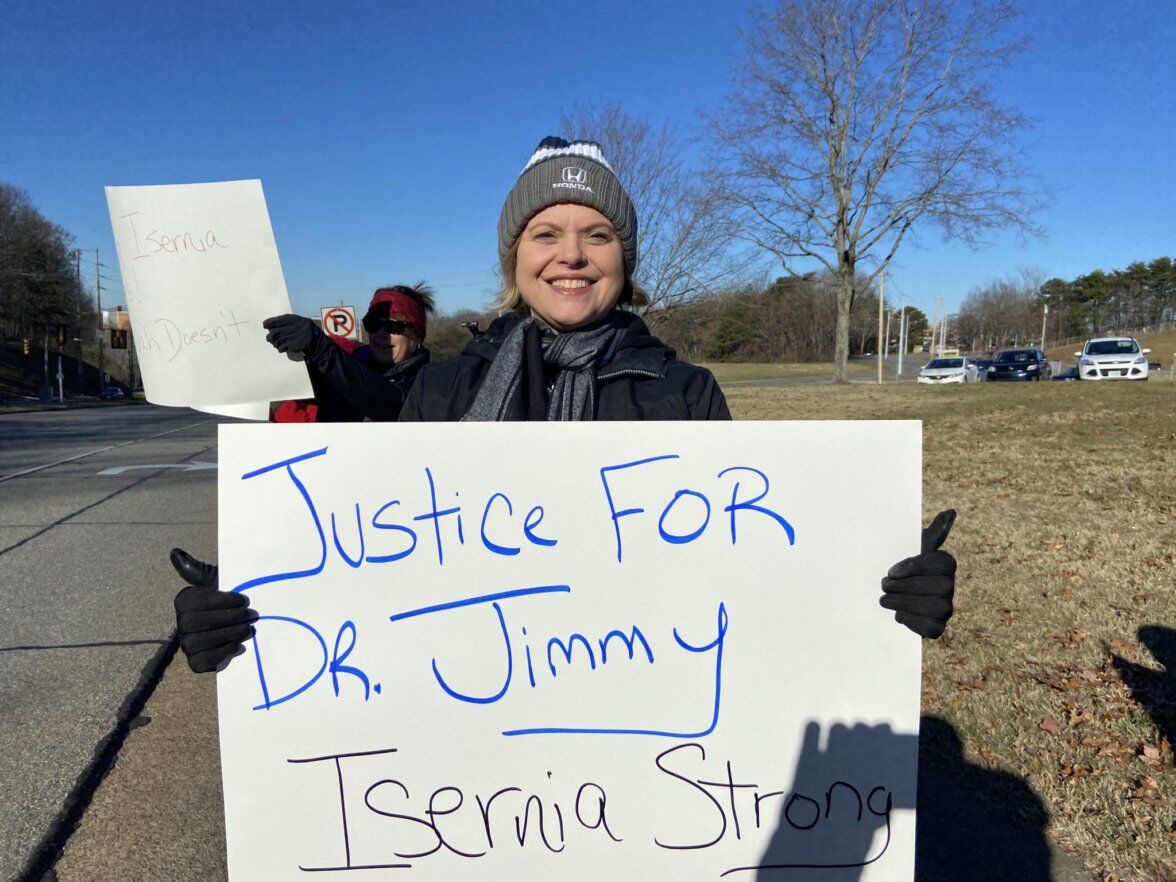 Trina Well, a patient of Dr. Isernia, attends rally in support of the doctor who was recently dismissed by Sovah Health.

Supporters of Dr. James Isernia rally together along Commonwealth Boulevard near Hospital Drive.

About 60 people participated in a rally for Dr. James Isernia Saturday morning on Commonwealth Boulevard.

Some of the vehicles in the Martinsville high school parking lot sported signs in support of Dr. James Isernia.

Some people attended the rally, but remained in their cars with signs supporting Dr. James Isernia. 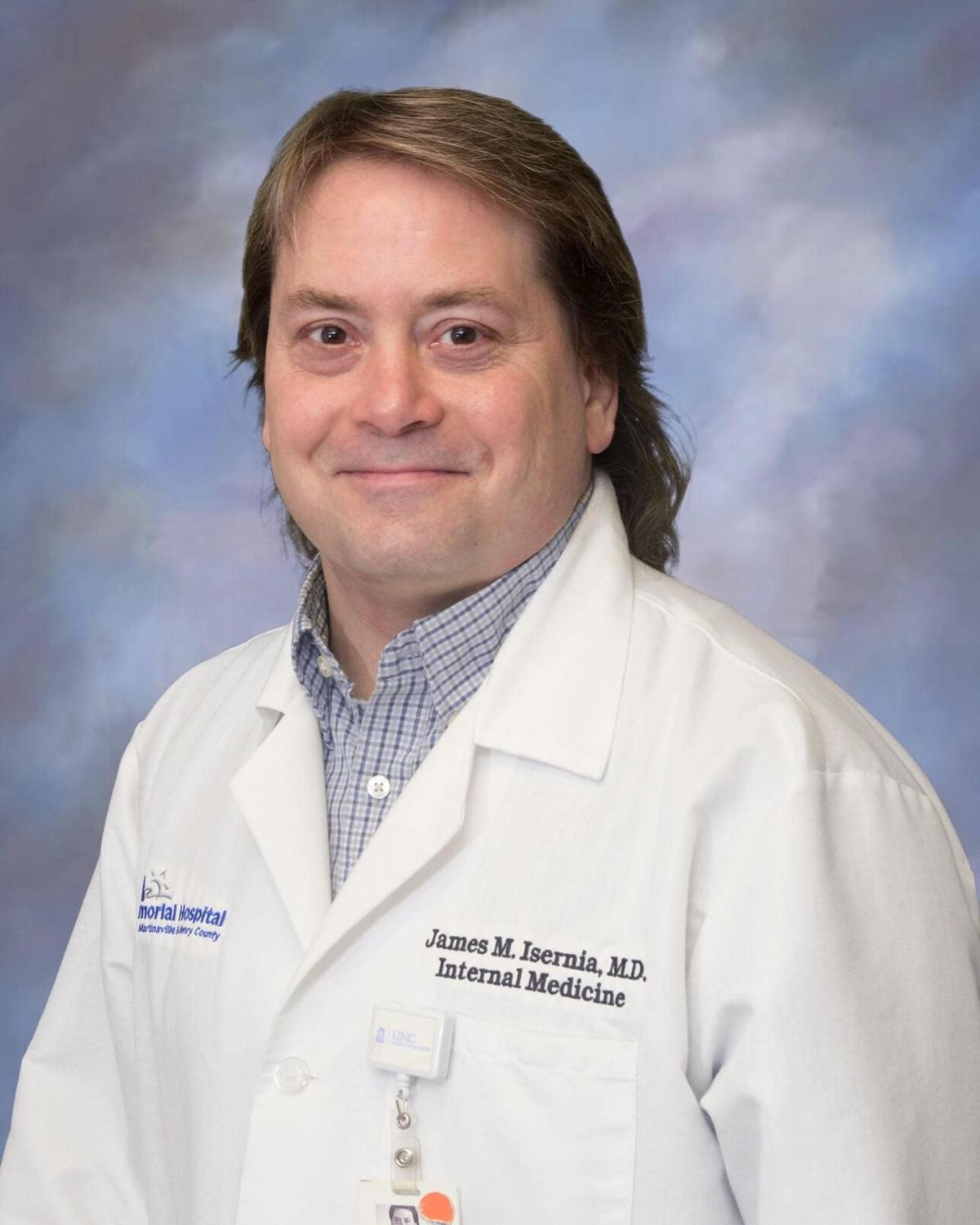