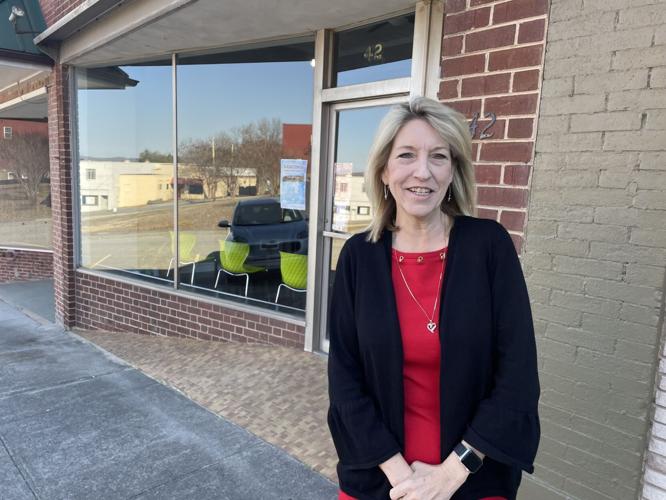 Halfway into its 2-year funding from the Harvest Foundation, Uptown Partnership (UP) moved into an office suite at 42 Franklin St., next to the Black Box Theatre. On Friday UP’s board of directors announced that UP Executive Director Kathy Deacon will leave the organization in September. She joined UP in May 2021. 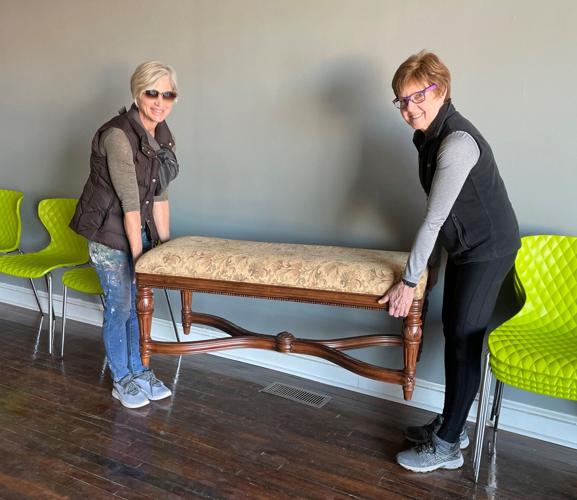 Volunteers are important in the functioning of Martinsville Uptown Partnership, said Executive Director Kathy Deacon. Two of them are Tara Compton (left) and Barbara Parker, who recently helped arrange furniture in the office lobby.

Uptown Partnership (UP) has settled into a new office at 42 Franklin St., next to the Black Box Theatre.

Though Uptown Partnership was created with 2-year funding from the Harvest Foundation, “we are figuring out ways that this organization can last forever,” said Kathy Deacon.

Deacon came on board in May 2021 as the executive director of the recently formed uptown revitalization organization, which is operating with a 2-year, $350,200 grant from the Harvest Foundation.

In its aim to bring more businesses and consumers to the uptown area, UP has various projects going on, including turning an old back alley into a fun place to spend time; meetings with merchants to plan promotions; training and funding for new businesses; and community input.

UP also has an advisory board “made up of key stakeholders,” as Deacon described them: Lisa Watkins of the MHC Chamber of Commerce, Brandon Martin of the County, Mark McCaskill of the City, Sarah Hodges of the Economic Development Commission and Kathleen McEvoy of the West Piedmont Planning District Commission. That board’s role is advisory; it does not have voting rights, she said.

The two boards meet separately once a month.

“All of the work gets done through the board and the committees,” Deacon said. “I just help steer the ship.”

UP also will have two interns through Career Works, Jacovia Hairston and Lauren Carter.

A roster of volunteers is on call to help with tasks such as setting up the new headquarters, setting up for and manning events and running errands. “It’s all community-driven,” Deacon said. “I’m here running the organization, but the work is done through community volunteers.

The “first big project” is the Wall Street alleyway, which runs between Walnut and Bridge streets. In the summer, volunteers and city workers got it cleaned up. Next will be Frazier and Associates paving it in a curvy path design. Community vote chose the design from among four options UP had posted on its Facebook page.

After paving, outdoor furniture and lighting will be installed, to turn the area into a place for people to spend time socializing, perhaps over meals purchased from area restaurants. It will have tables in blue, green and perhaps yellow, she said, with umbrellas to provide shade.

Just a few blocks away, at 53 Fayette St., UP will unveil new banners along the Fayette Street corridor at 11 a.m. Monday.

UP holds a monthly meeting of uptown merchants. They talk about matters involved in having businesses uptown and plan promotional events.

On the weekend before Valentine’s Day they held a pop-up shop in a building on Walnut Street, where local artisans had exhibits of their products for sale. The building is owned by Dr. Mervyn and Virginia King and rented by Liam Kearny, who lives in an apartment behind the retail space.

Forty “Uptown Bucks,” gift certificates worth $5 each to use uptown, were given away to the first visitors. UP reimbursed businesses for each of those gift certificates they received as payment. With the “Come Feel the Love in Uptown” gift basket giveaway, merchants contributed more than $1,000 of merchandise and services. The lucky winner was LaDonna Hearn Varner.

UP is exploring ways to host a pop-up shop once a month, Deacon said: “It would not only give our fabulously talented artisans it the community” a place to sell their crafts but also “create some life and vibrancy in some of the empty spaces that we still have uptown, with the ultimate goal of getting people uptown again.”

The next promotion will be “Uptown Madness.” Its details are still being hammered out, but basically, in a play on basketball tournament March Madness, anyone who wears sports team attire would get a discount with participating businesses.

“The Chamber/C-PEG is already doing a fabulous job with having lots of promotions and working” to foster interest uptown, Deacon said. “We through this merchants’ meeting group want to enhance any events or promotions that are already going on and create new ones where there are gaps to fill.”

The goal would be to have “something going on” uptown every month, she said. “We’re here to enhance what’s already happening and fill in the gaps.”

UP received a $90,000 grant from the Department of Housing and Community Development (DHCD) and $30,000 from the City of Martinsville. Of that, $75,000 will be split between three to five people who plan to establish businesses uptown and $45,000 goes toward administrative costs such as marketing and running the program.

The program, called The Gauntlet, is administered through the Advancement Foundation of Vinton as a Community Business Launch program of the DHCD. The Gauntlet provides a 10-week online class “that takes folks all the way from ideation to a pitch that will happen after class.”

The class has participants from 13 communities; those who are participating locally must be willing to open their businesses in uptown Martinsville. Twenty-eight local people are enrolled, competing against each other to be one of the winners to split the $75,000 to help open their businesses.

The participants will give their business pitches in June; winners will be announced shortly after that; and the businesses aided by that funding must be established uptown by the end of September.

The Community Vision Plan is handled with the help of Downtown Economics consultants from Richmond.

The goal is to create a vision and implementation plan for uptown. The consultants conducted surveys in the summer and early fall. Two hundred ninety-eight people responded to the survey, said Deacon, and focus groups were conducted with faith community leaders, business owners, West End residents and non-profit organizations.

“Part of the process is we asked the consultants also to take a look at the other studies that have been done in the last 20 years to use those recommendations that were repeated throughout each of those studies, to see what’s still viable now,” Deacon said.

“Many of those studies recommended that the same things get done and they just didn’t get done for a myriad of reasons.” Those earlier aims will be revisited and “put on priority lists as well as merging it with what the community wants to see right now.”

The consultant firm is in the final stages of review of the previous studies as well as the one it did. The results of its findings are expected to be released on Friday.

For more information on UP, contact Deacon at kathydeacon@martinsvilleup.com or call 276-212-2060.

Holly Kozelsky writes for the Martinsville Bulletin. She can be reached at hkozelsky@martinsvillebulletin.com and 638-8801 ext. 2430.

Halfway into its 2-year funding from the Harvest Foundation, Uptown Partnership (UP) moved into an office suite at 42 Franklin St., next to the Black Box Theatre. On Friday UP’s board of directors announced that UP Executive Director Kathy Deacon will leave the organization in September. She joined UP in May 2021.

Volunteers are important in the functioning of Martinsville Uptown Partnership, said Executive Director Kathy Deacon. Two of them are Tara Compton (left) and Barbara Parker, who recently helped arrange furniture in the office lobby.