WATCH NOW: Father Mark White is a priest without a church after Vatican, bishop reject pleas
0 comments
Share this
{{featured_button_text}}

Father Mark White still wears his clerical collar — he is still a Catholic priest after all — but without a church to serve and apparently grim prospects for being assigned a new one.

On April 2 White received a document written in Latin from the Apostolic Signatura, the Supreme Court of the Vatican.

“I struggled to translate it, but it reaffirmed the decision rendered by the Congregation of the Clergy in June 2020, that is: My appeal of the bishop’s decision to remove me as pastor of Rocky Mount and Martinsville did not come from the right source, a procurator,” White said. “Since then the clock has run out.”

White’s case before the court was dismissed the first time on a technicality, for White’s failing to refer to his canon lawyer as a “procurator,” the second time because the Vatican’s imposed statute of limitations had expired.

White’s final appeal also was dismissed because of the statute of limitations had expired.

White, 51, was ousted as priest of St. Joseph’s Catholic Church in Martinsville and St. Francis of Assisi in Rocky Mount because of a protracted conflict with his superior, Richmond Bishop Barry Knestout, about posts on his popular blog that were critical of the church hierarchy’s handling of sexual abuse in the church.

Knestout told White if he didn’t cease publishing his blog, he would lose his job, and White stopped for a few months, but when the pandemic hit, he resumed his blog after seeking permission from Knestout without reply.

In his blog, White has blamed the church’s hierarchy of keeping sexual abuse within the church hushed as “the fundamental source of scandal,” and an “inexplicable reticence to share information.”

“The Signatura decree did not address the blog at all,” White said.

So a few days after receiving a response from the Vatican, White wrote a conciliatory letter to Knestout, accepting the outcome of the process and admitting his appeals had been duly dismissed.

White said in his letter that he was eager to do what he could to have his suspension from public ministry lifted, including accepting the offer Knestout had previously made for White to be reassigned as a prison chaplain for the diocese.

Knestout responded, referring to White’s adamant stance of having a blog as his “persistent resistance to correction,” and showed not only a lack of respect but was a violation of his “solemn promise of obedience.”

Knestout encouraged White to consider requesting laicization, which is to ask to have his rights and responsibilities as a priest removed.

A laicized or defrocked priest is still a priest in the Catholic Church, but he may no longer wear the clerical collar, perform the sacraments or hear confession.

“He did not give me much time to think over whether or not I wanted to request laicization myself,” White said. “Three weeks later he wrote to inform me that he had written to the Vatican, asking that I be removed from the priesthood.”

White said he was stunned by Knestout’s latest actions.

“Every priest I know, and I know quite a few, is utterly flabbergasted by what the bishop has done,” White said. “The bishop is obliged to discuss the matter in person with me before petitioning Rome, and he never did that.”

White says there is no precedent to his case before the Vatican to be found, but history is rife with examples of priests who have committed despicable acts and were never laicized, remaining priests until they died.

“These days, very few Catholics believe there is a due process in the church’s legal system; it’s all about favors and who you know,” White said. “To be realistic about my prospects at this point, I have to accept that I could receive a letter from the Vatican any day now, telling me I’m out. That will immediately leave me with no income, no health insurance and no pension.

“If it happens, I know that the Lord will provide.”

WATCH NOW: Father Mark White brings in a sexual-abuse victim to tell his story of 'all the worst stuff'

A victim of a priest and a man from Martinsville ousted for writing about the topic take a speakers' series on the road to talk about the church and its handling of abuse.

They took their appeal for justice to Apostolic Nuncio Christopher Pierre in Washington, D.C., where they staged a peaceful demonstration.

WATCH NOW: Dispute between Father Mark White of Martinsville and Bishop of Richmond Barry Knestout will be decided by a Catholic court 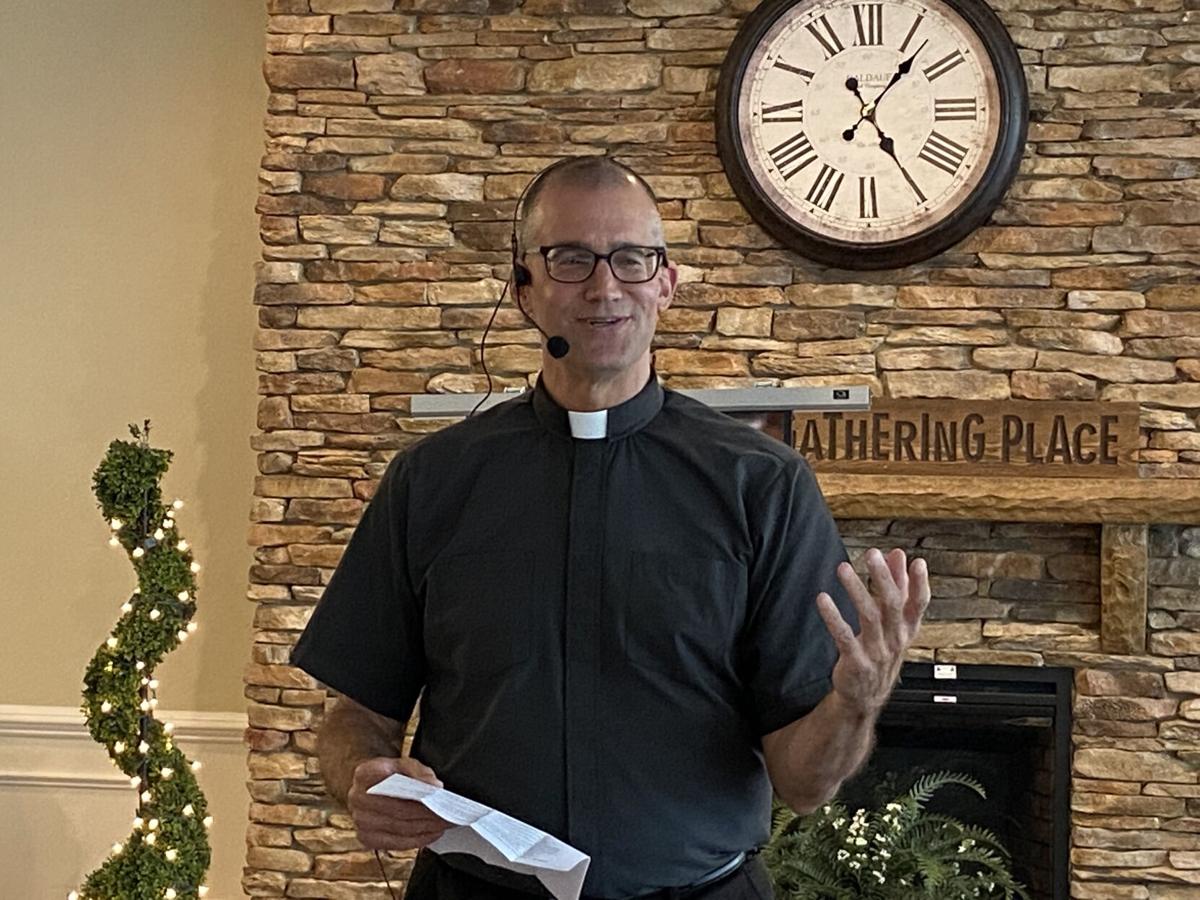 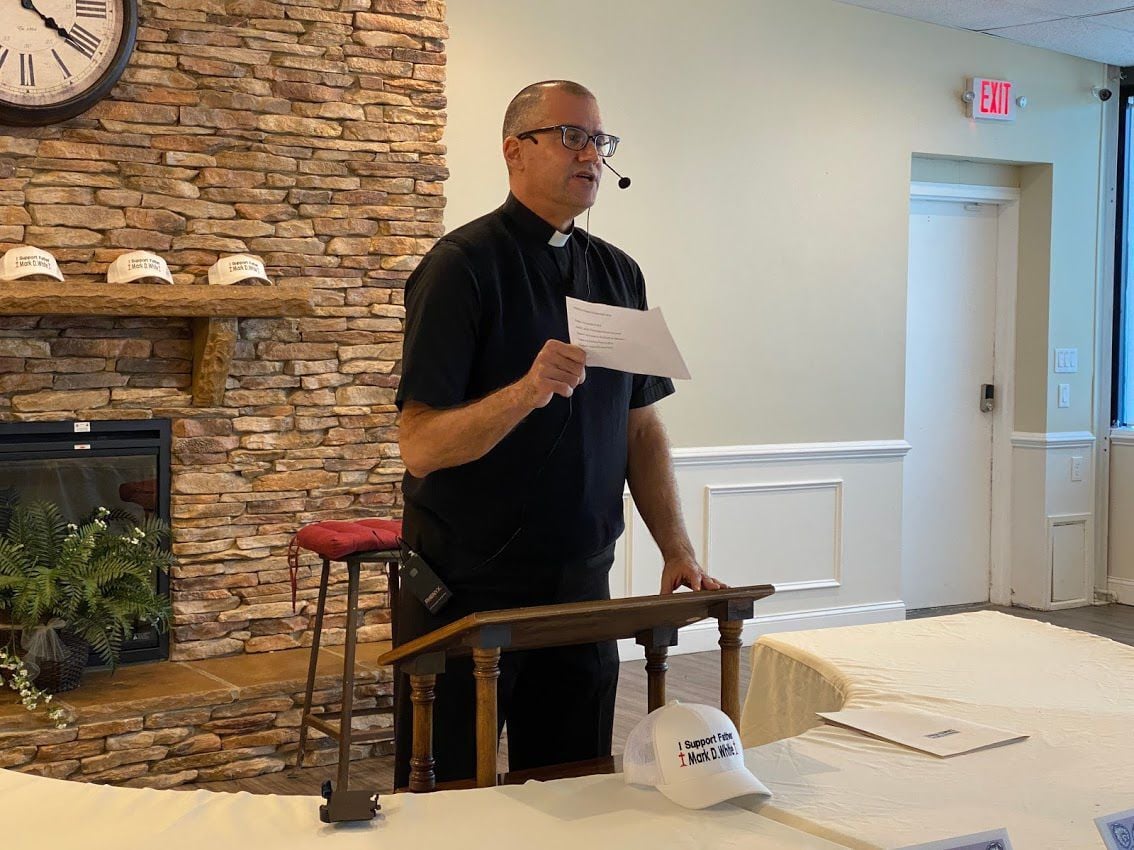 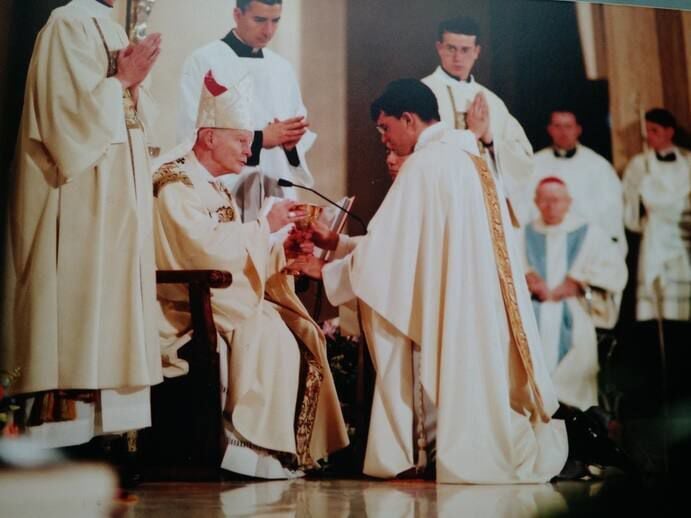 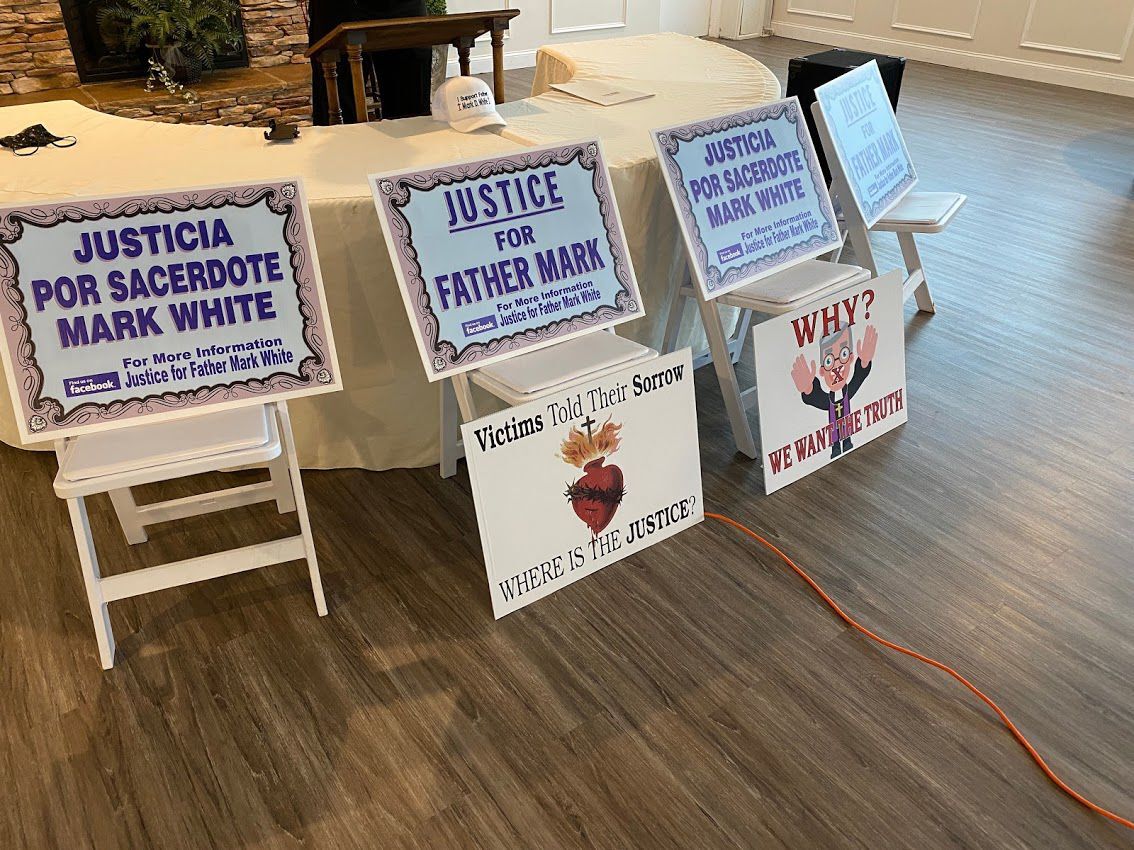 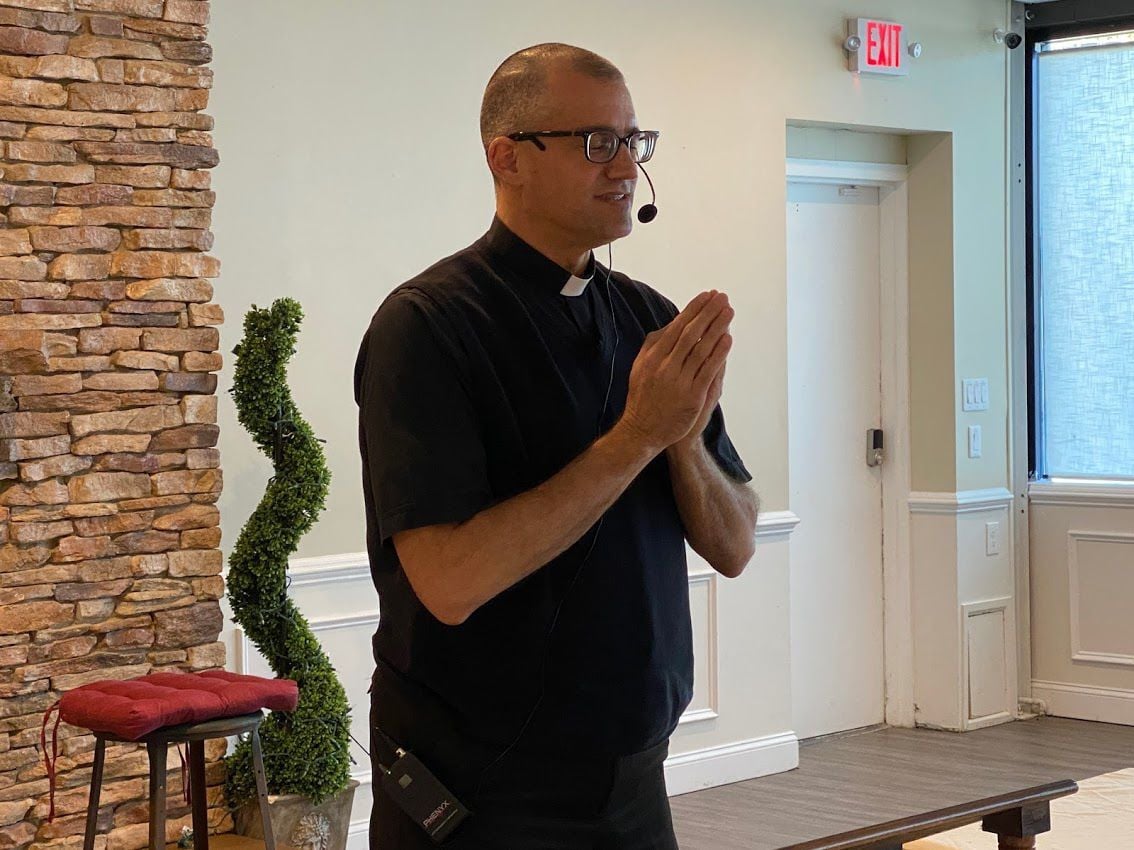 Father Mark White prays at the beginning and at the end of his book discussion. 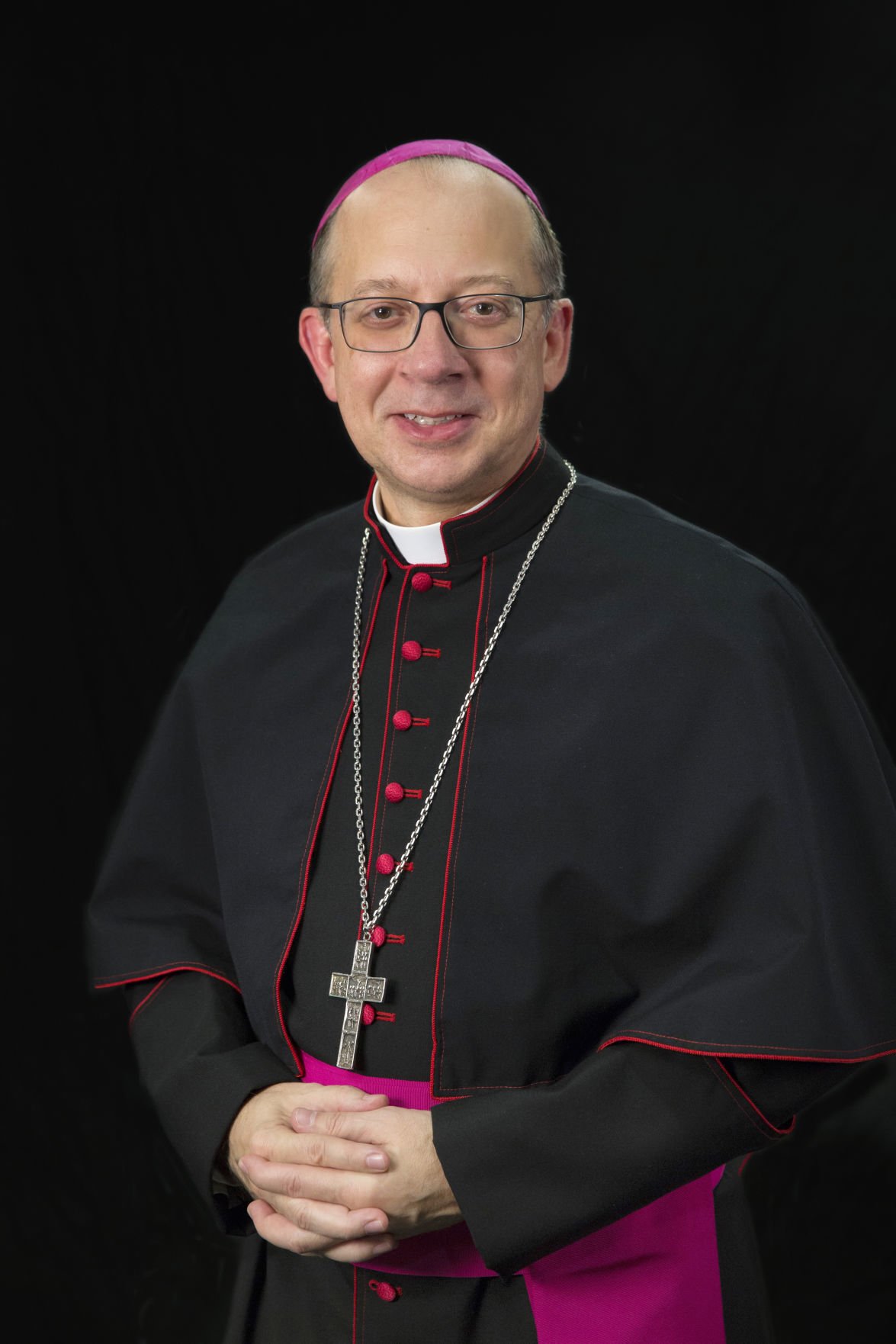