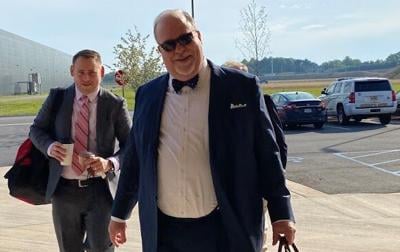 The city of Martinsville’s march to reversion continued Wednesday morning at a building closer to the North Carolina line than the city limits as a designated contingent of representatives from Henry County and the city met at the Commonwealth Crossing Business Centre to try to settle their differences.

Although it had been announced that the mediation would occur on Wednesday and Thursday, the location and time had not been revealed, and officials with the city and Henry County refused to disclose either.

The person serving as mediator has not been identified, but a city official has said that it could be a retired state Supreme Court justice.

At stake, though, are the fundamental issues that have emerged after Martinsville City Council voted in December 2019 to revert from a city to a town in Henry County, a transition that is allowed by state law without the approval from the county. A formal process underway is designed to reach that conclusion, and both governments asked the Virginia Commission on Local Government for a delay to enter into formal mediation.

The exclusion of public observation from this process is allowed by state code and repeatedly has been described by Martinsville City Attorney Eric Monday as “of a legal nature.”

Two members of the media, including the Martinsville Bulletin, though, waited at the entrance to the Commonwealth Centre for Advanced Training as Board of Supervisors Chair Jim Adams remained in his car in the parking lot with the windows rolled up, talking on his cellphone.

A woman came to the two front entrances and explained she was locking the doors, apparently to prevent any unauthorized entrance.

“I’m going to go inside and see what they tell me,” the deputy said. “Then I’ll come back out and tell you what they want me to do.”

After a few minutes the deputy came back outside and announced the media was welcome to take all the pictures they wanted to, “but you’re not going inside this building,” he said.

The first participant to arrive was a man dressed in a suit carrying a briefcase strapped over his shoulder and a box of files under his arm. He identified himself as being with Henry County, but he was neither a member of the Board of Supervisors nor a county employee.

Adams was next to walk up and attempt to open the by-then locked doors. After a couple of minutes, the woman inside opened the door for Adams.

“Good morning is all I can tell you right now,” Adams said as he went inside.

Henry County Attorney George Lyle was then seen through a front window to be inside the building for a few moments before someone closed the blinds.

Martinsville Vice Mayor Jennifer Bowles declined to comment as she walked into the building.

City Manager Leon Towarnicki followed behind a man who appeared to be the city’s hired attorney, who was led by Monday.

We “just hope it’s a good day,” Monday said when asked if he had any comments before the process began.

Neither officials from Martinsville nor Henry County will say what issues -- if any -- they might have agreed upon. Lyle only has described the cost of reversion to the county as “a major sticking point.”

Some of the key elements involve schools, courts, utilities and taxation.

The Commission on Local Government granted that requested 84-day pause in its process to allow the two localities to attempt to iron out their differences and come to some agreement that will reduce the work required by the commission to complete the approval process.

The commission has commented that, if progress is made, the delay could be extended.

Either way, the only thing the public will know about what is discussed on Wednesday and Thursday is what those behind the closed blinds and locked doors choose to disclose.

Martinsville Mayor Kathy Lawson was the last to arrive after she “hit every red light” driving to the Commonwealth Business Centre, more than 13 miles from city hall.

“I’m hoping for a productive day of mediation with Henry County,” Lawson said. “Level heads should be able to compromise and negotiate." 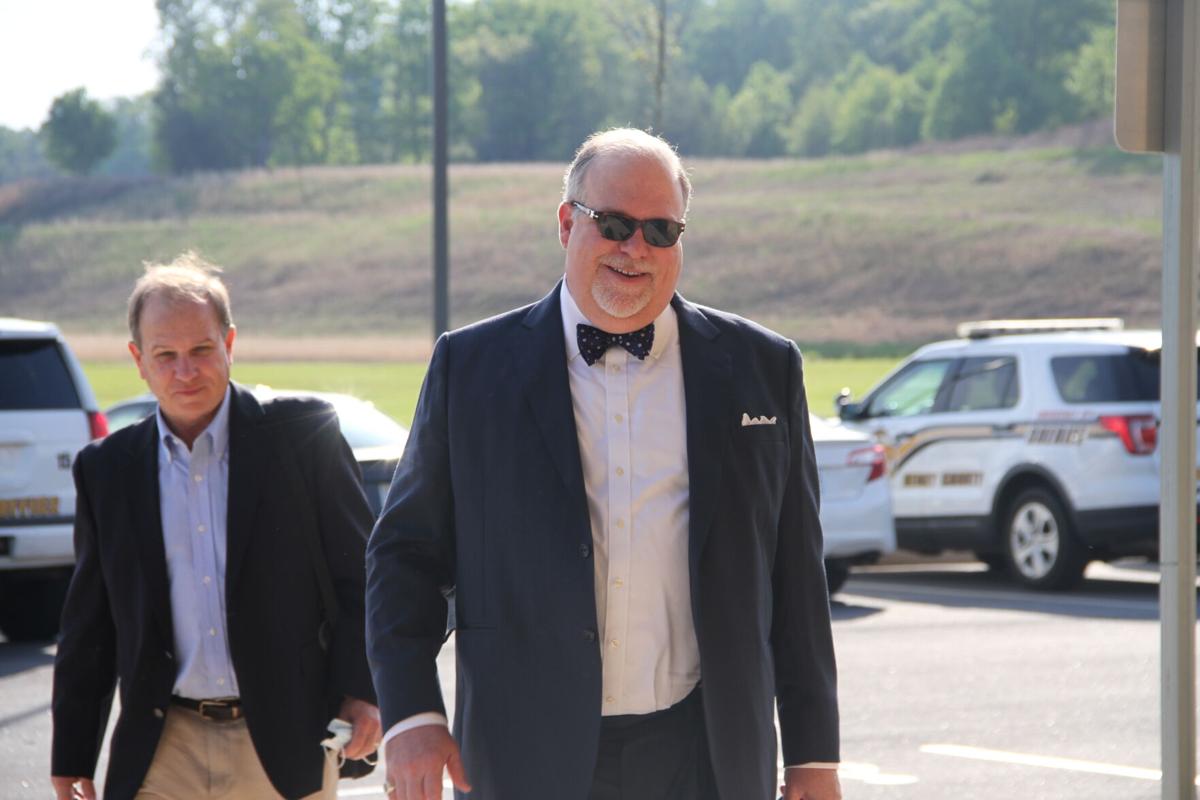 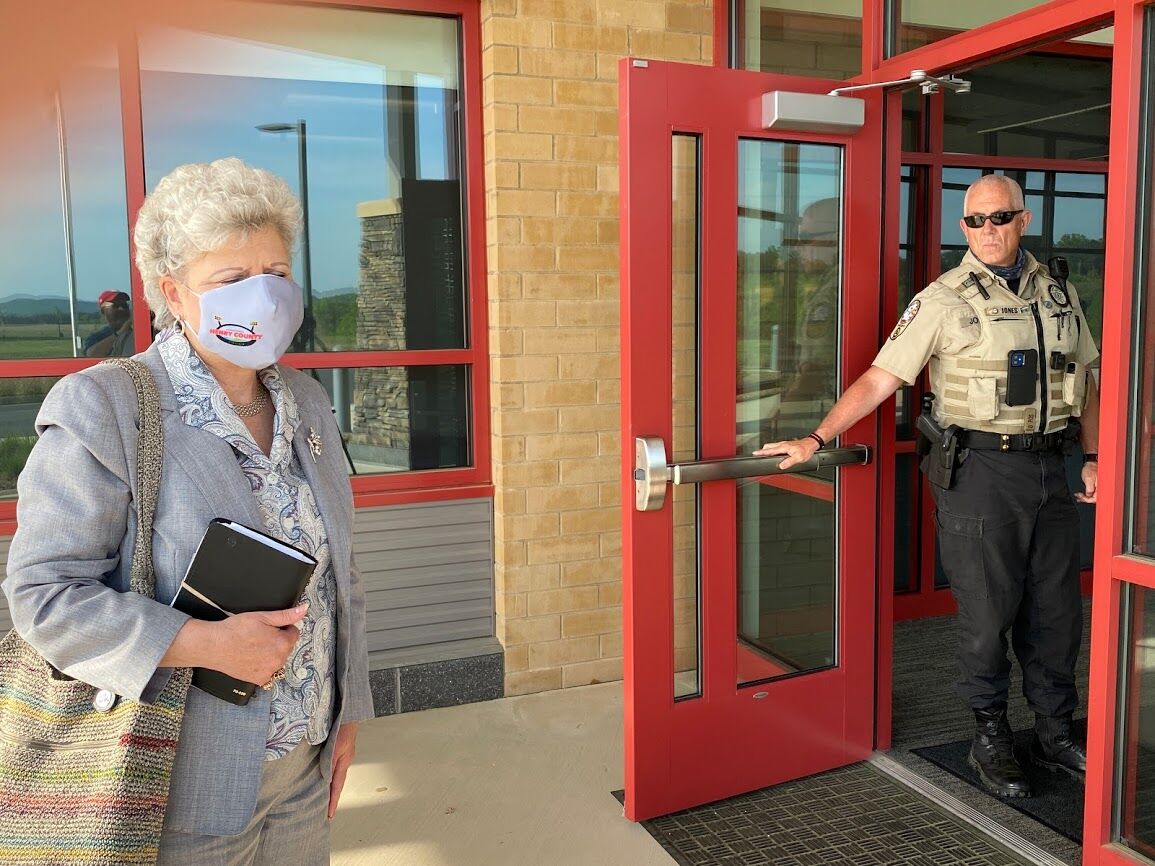 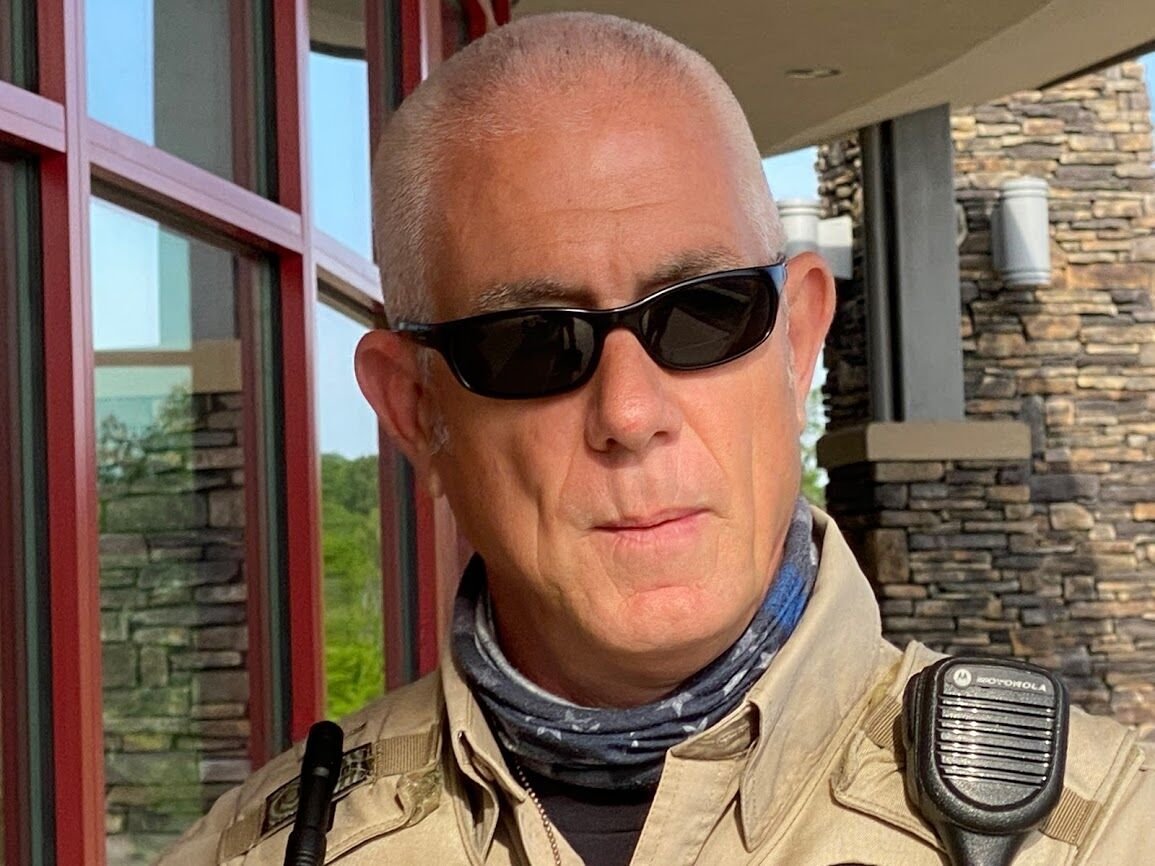 Henry County Sheriff's Deputy announces media would not be allowed inside. 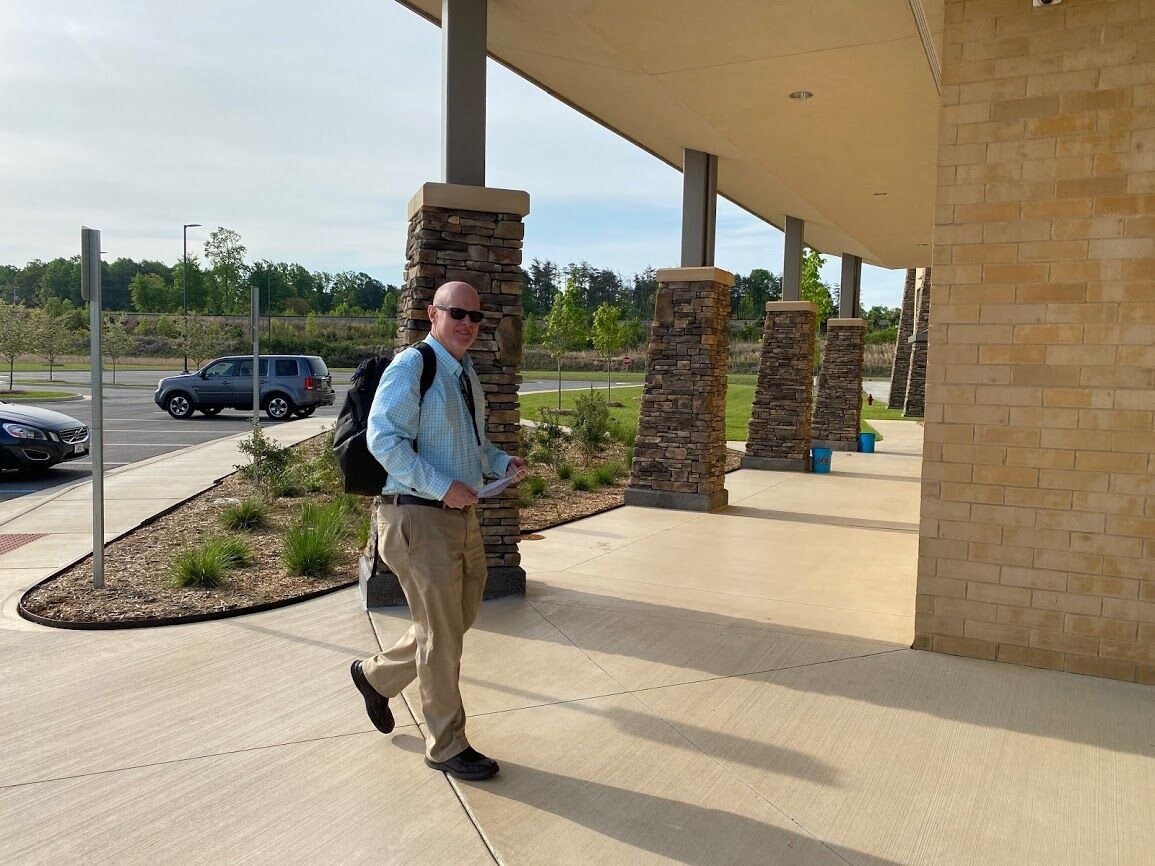 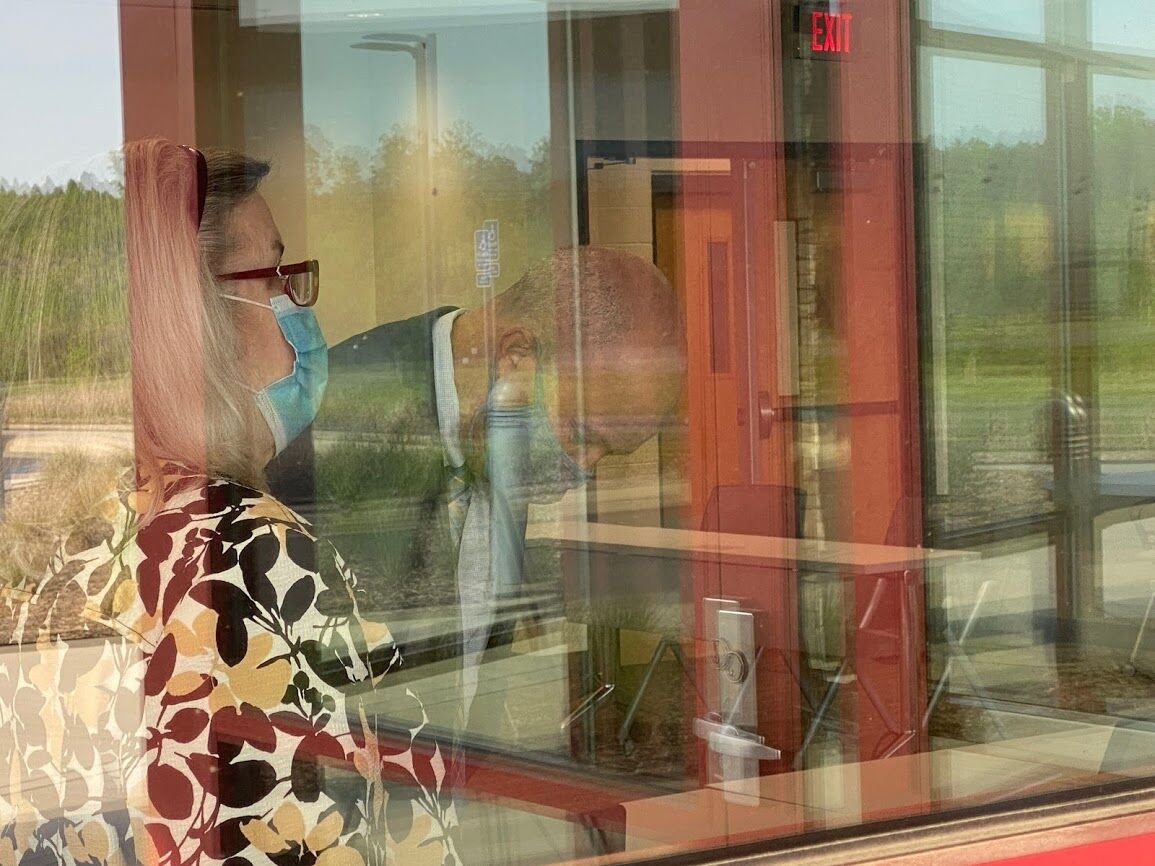 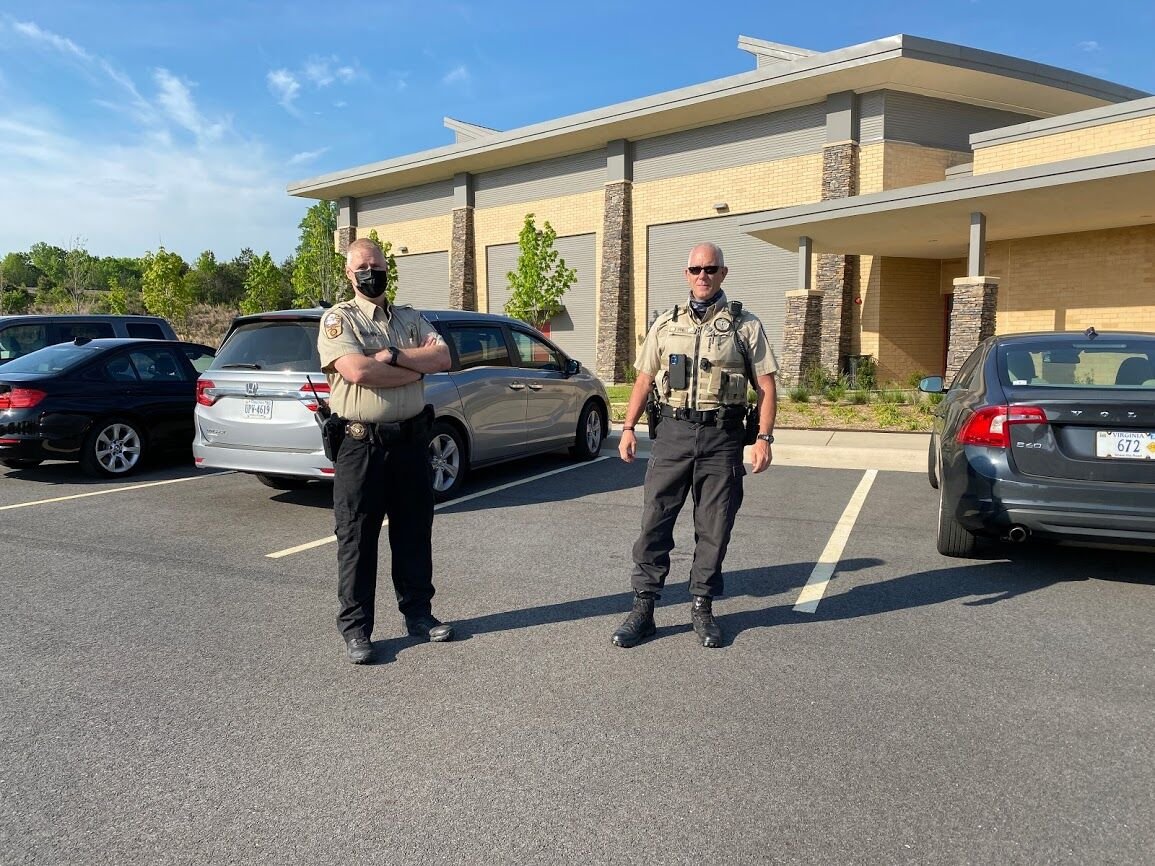 More deputies arrive to secure the parking lot of the building where mediation meeting is set to begin. 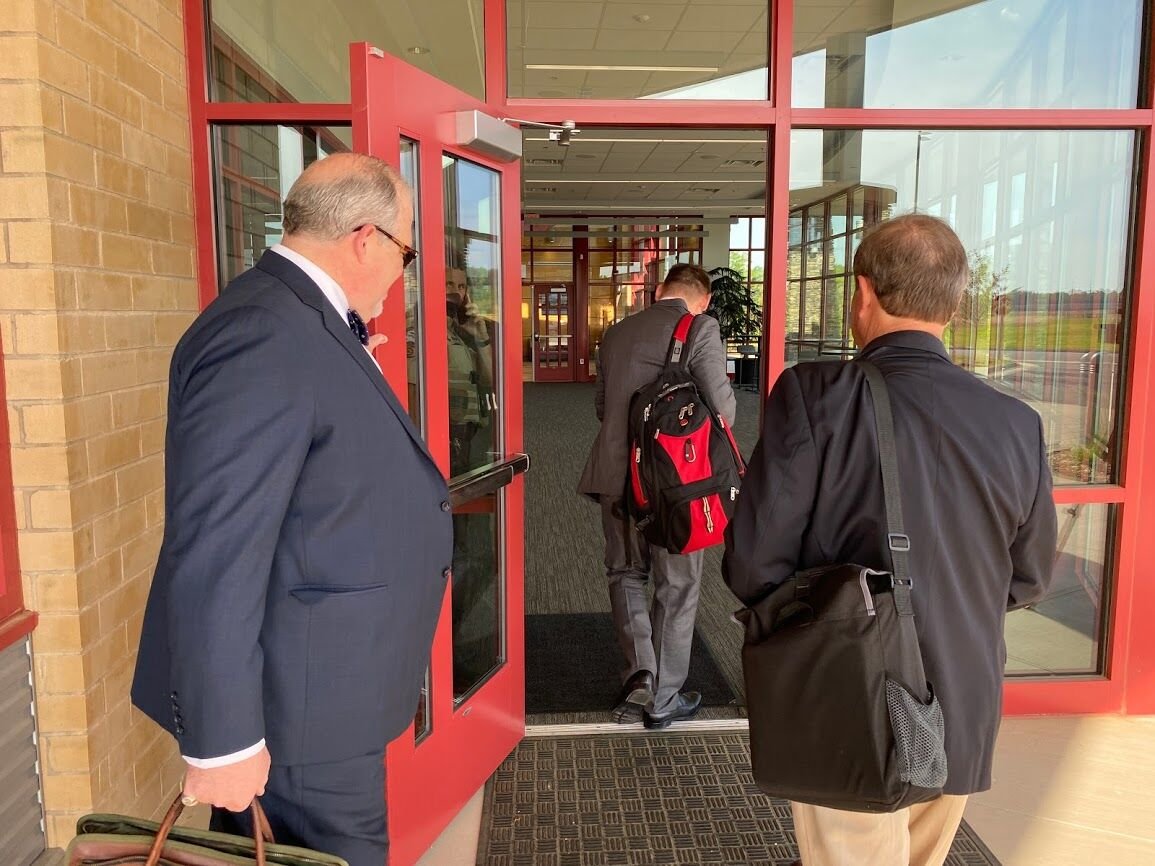 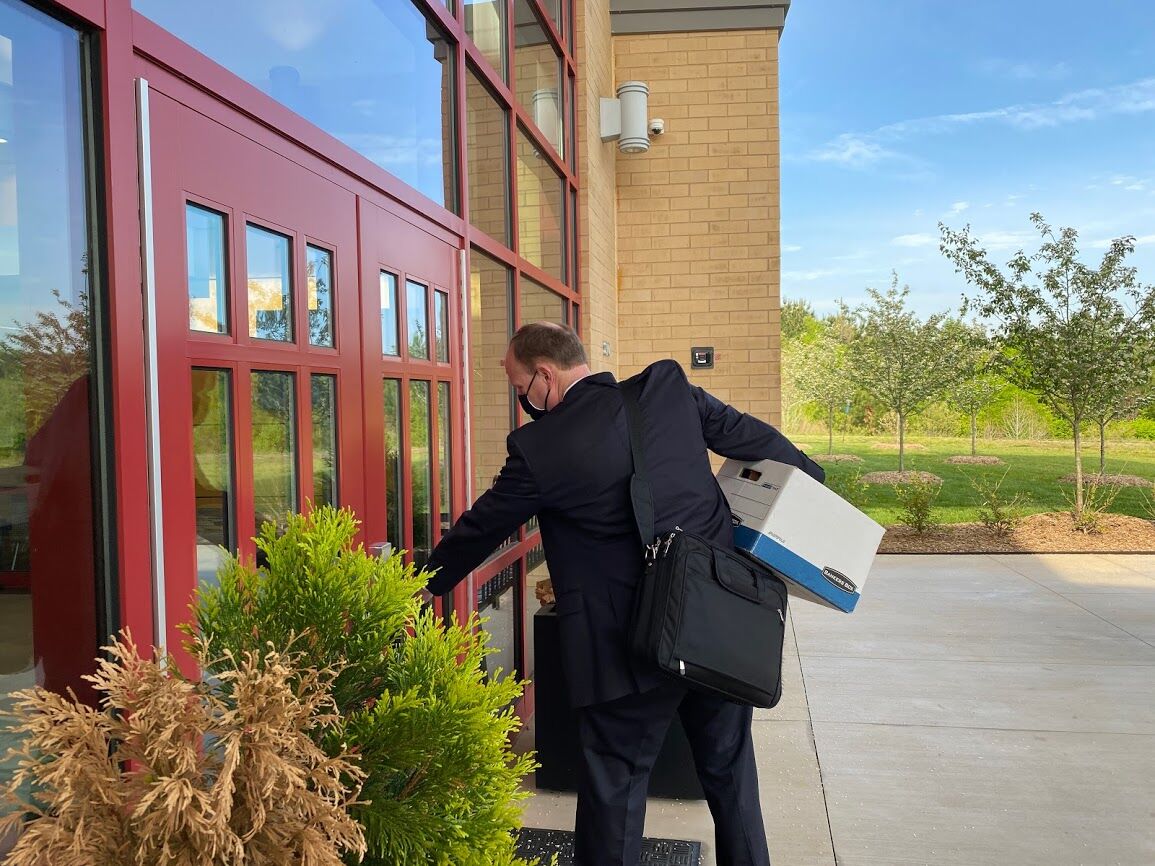 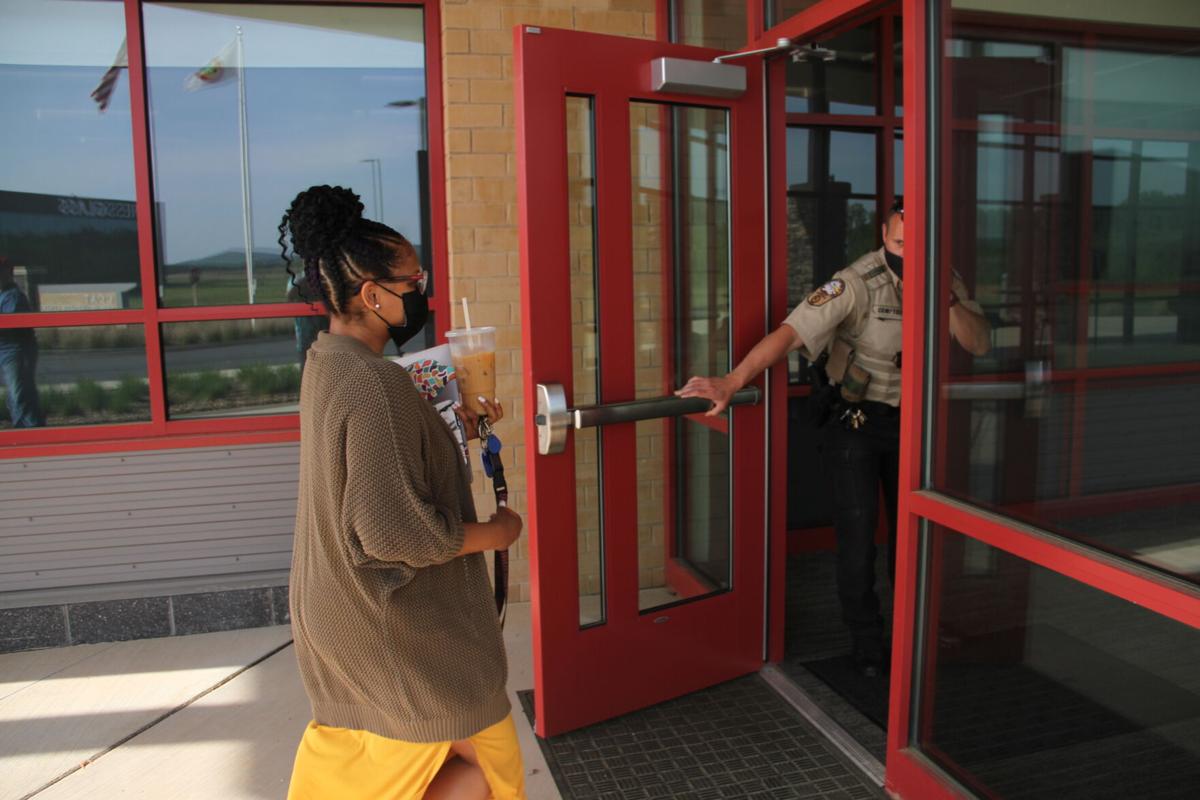 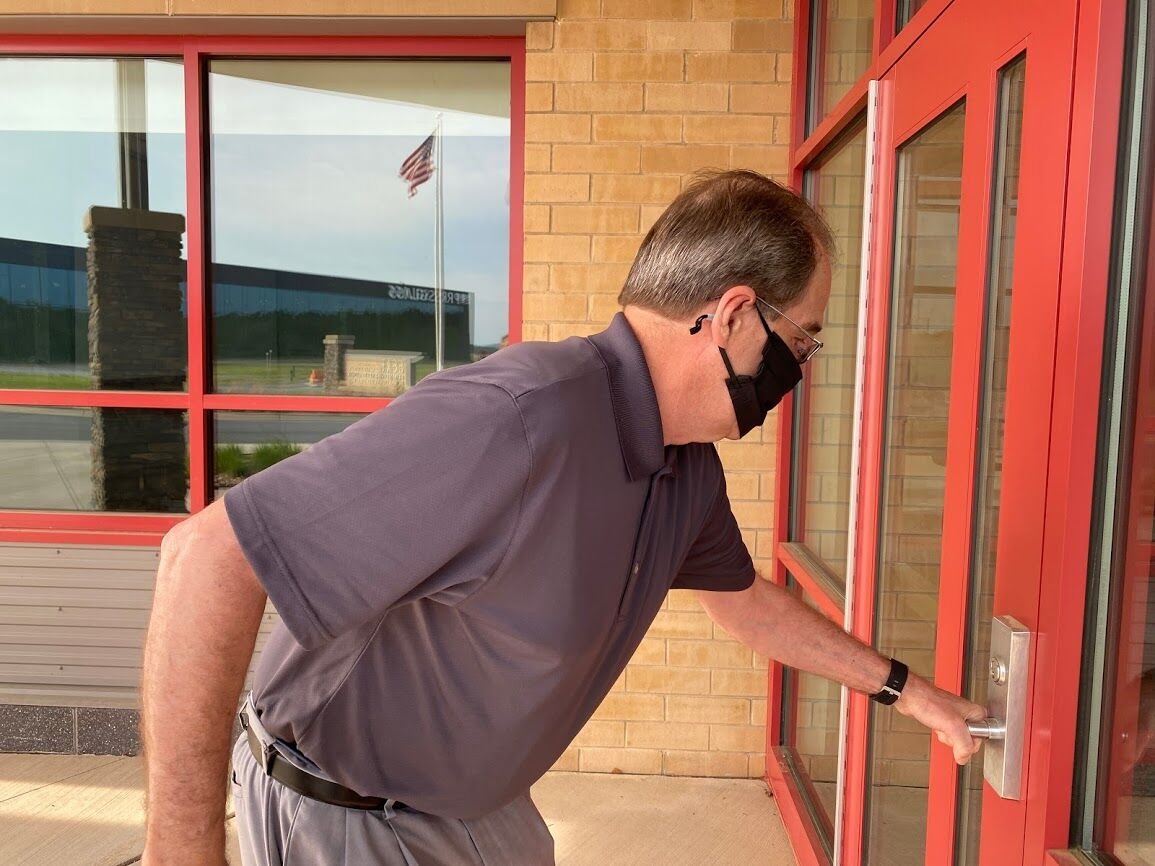 Henry County Board of Supervisors Chairman Jim Adams attempts to enter, but discovers the door is locked. 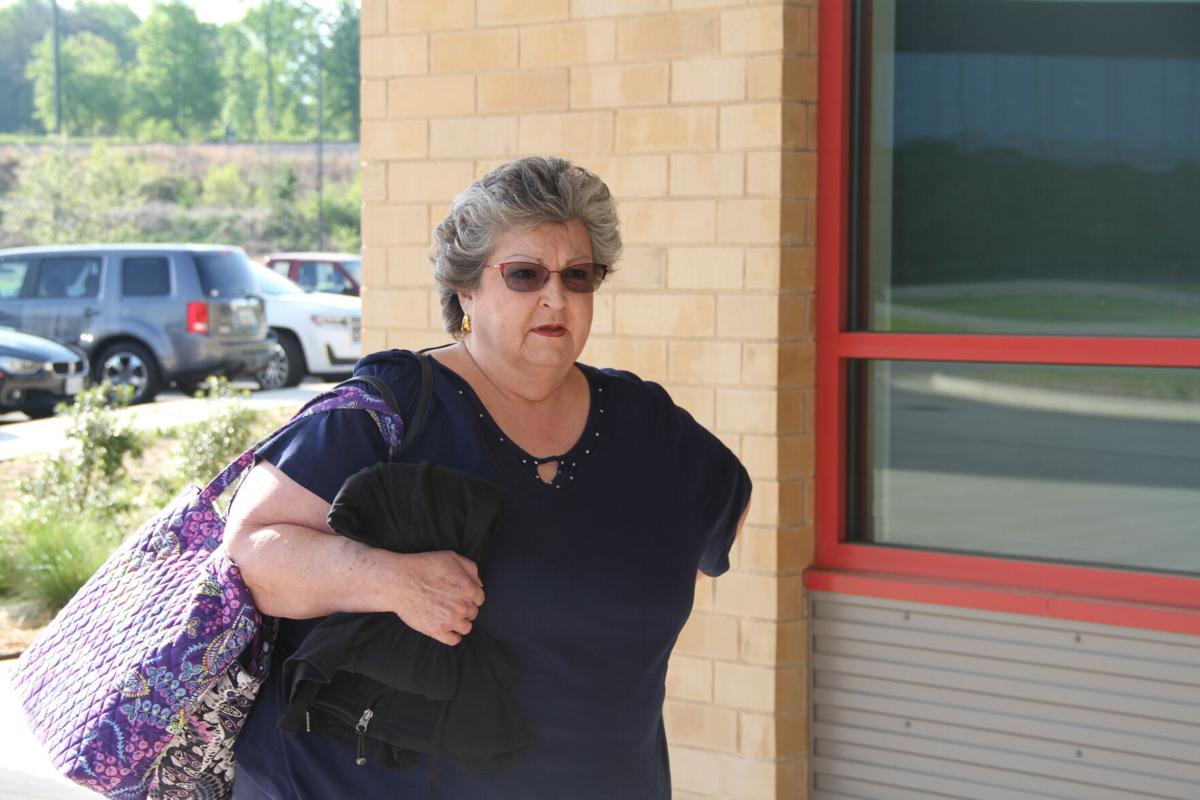 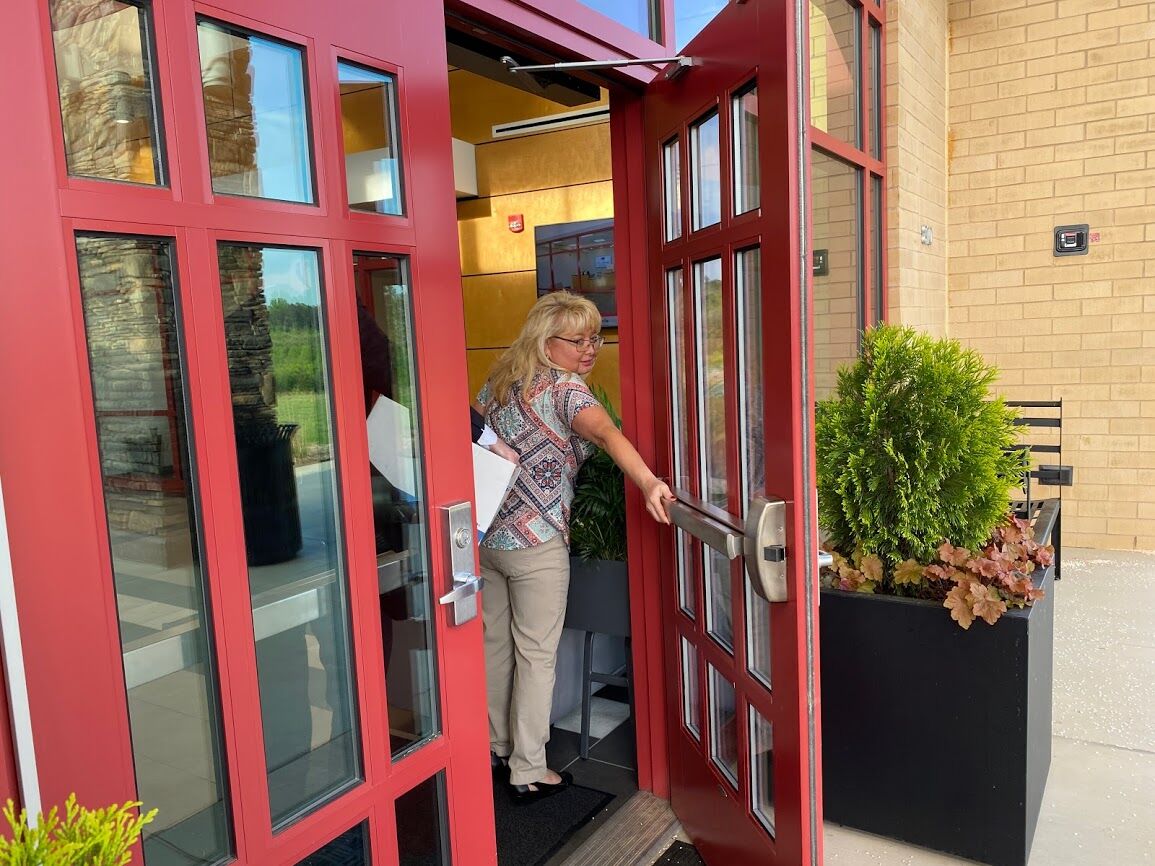 Doors are locked at entrance to building where mediation is being held. 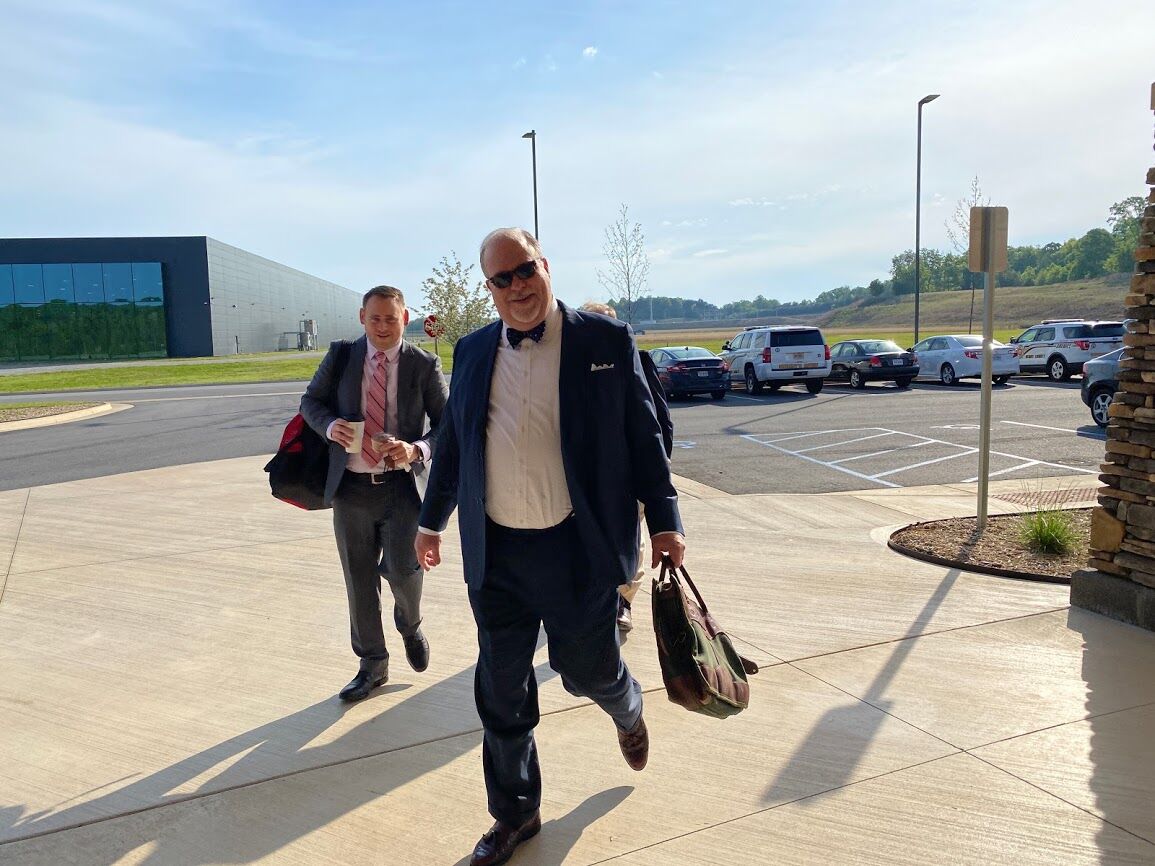 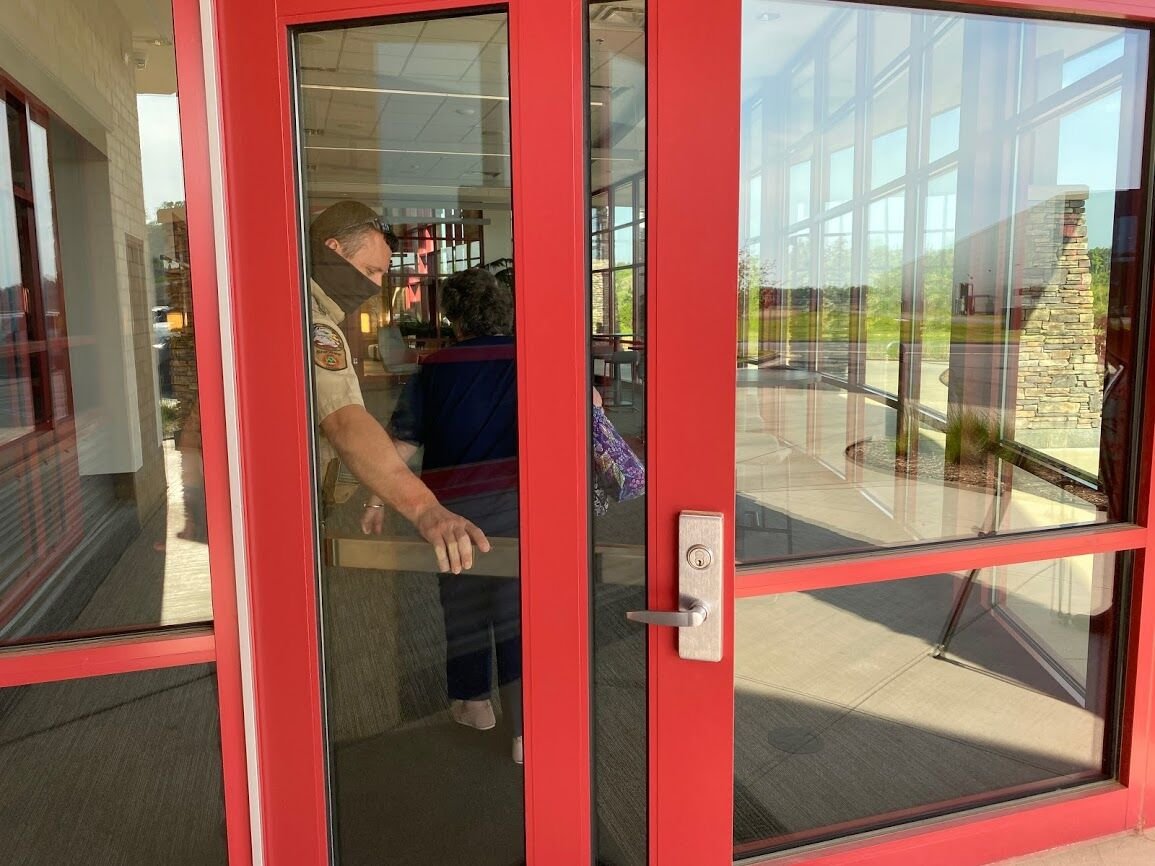 A Henry County deputy guards entrance to the door where mediation is scheduled to begin. 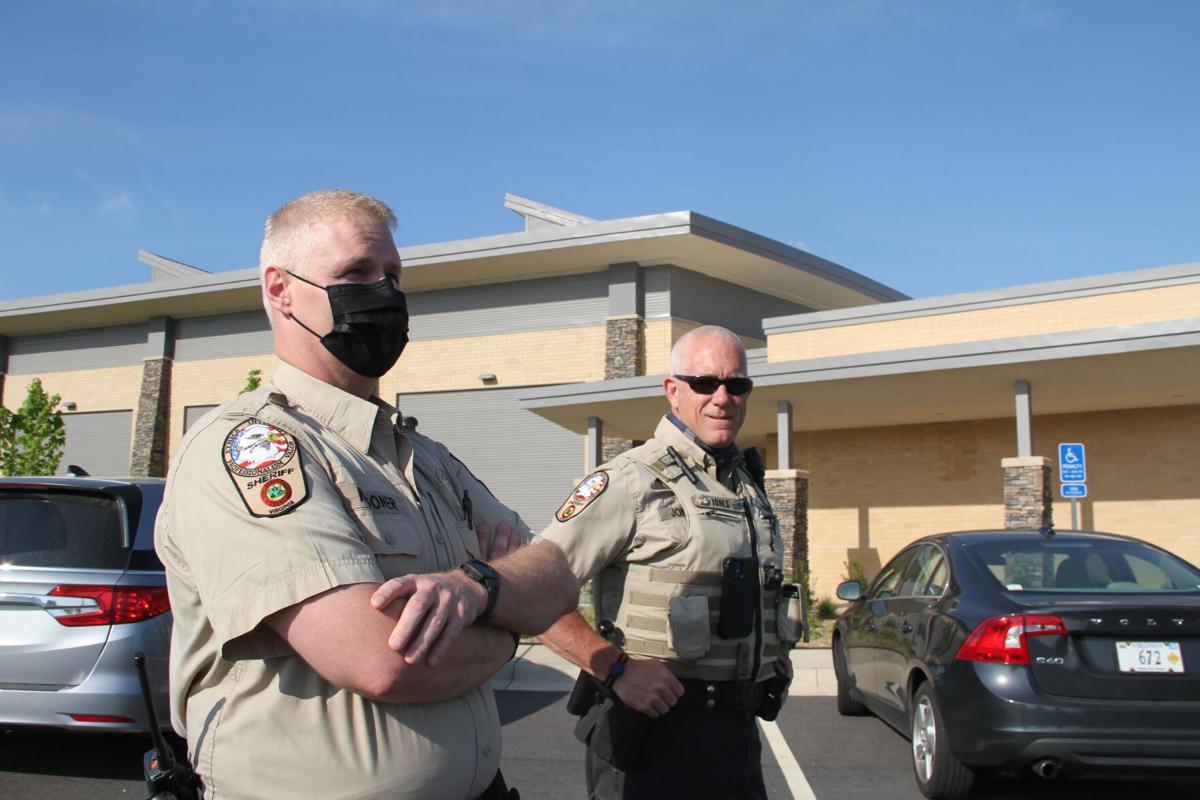