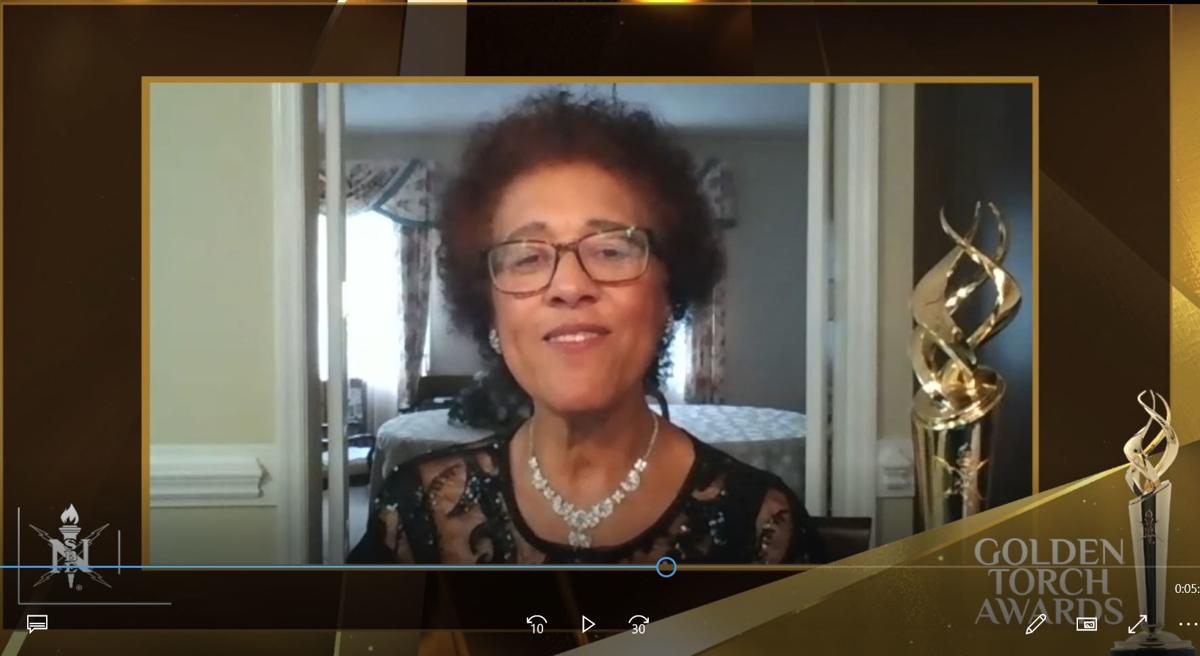 Helen Howell of Martinsville, at home dressed in formal attire, gives her acceptance speech for NSBE's Golden Torch Award -- done over video, and presented at NSBE's national convention, which was held online, because of the pandemic. The chapter also won for Program of the Year. 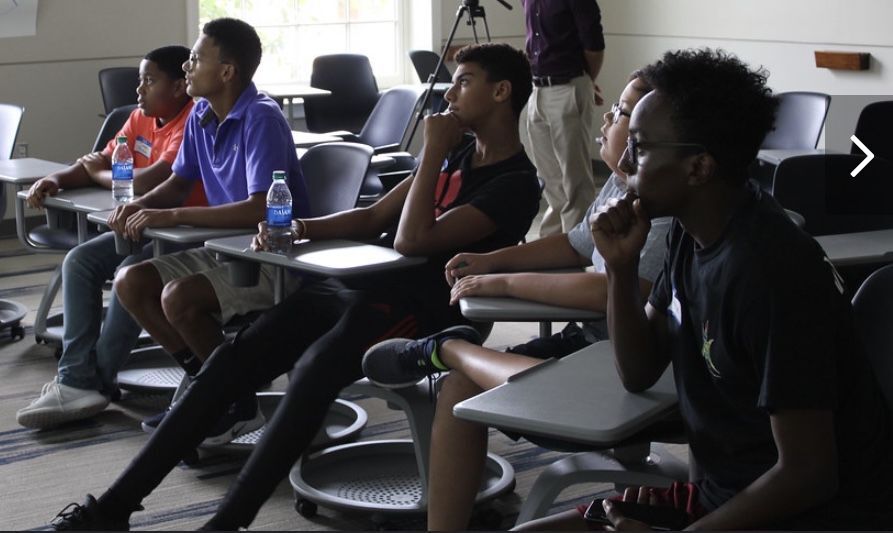 Members of the Martinsville-Henry County chapter of the National Society of Black Engineers Jr. listen to presentation at NCI last fall. 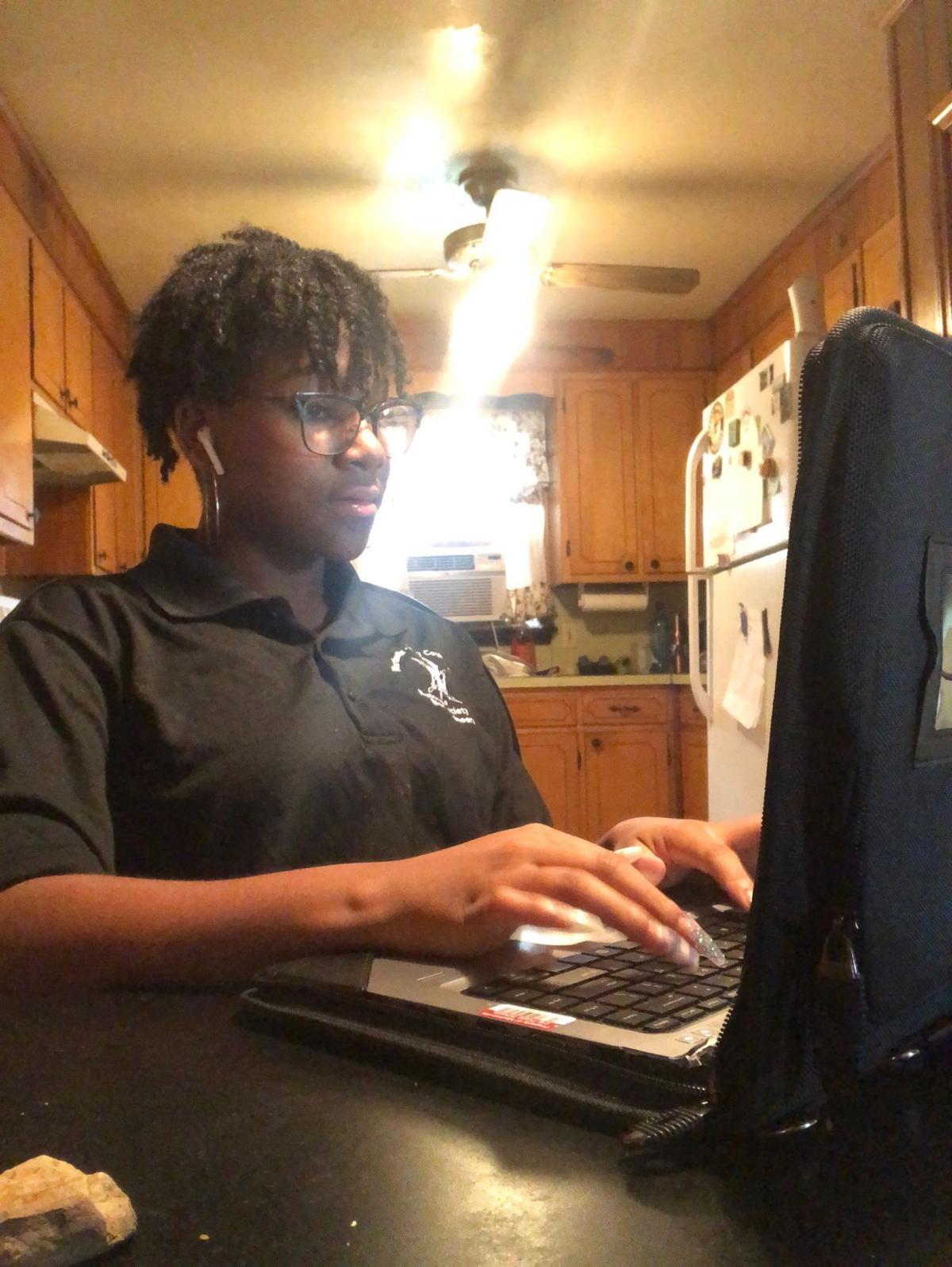 MHC NSBE Jr. Chapter President Symphanie Collins has attended three or four NSBE national conventions, she said -- and then this year's, held virtually because of the pandemic. Chapter Director Helen Howell won the Golden Torch Award for Director of the Year, and the chapter won for Program of the Year.

The way they received the top-level awards was different, because of the pandemic, but the local chapter of the National Society of Black Engineers still brought home top honors.

The Martinsville-Henry County National Society of Black Engineers Jr. chapter won two Golden Torch Awards, NSBE’s highest honor, one for Director of the Year for Helen Howell and one for Program of the Year.

The convention had been scheduled for March, and because of the pandemic, it was canceled at the last minute. NSBE regrouped and had the convention virtually in the third week of August.

The winners received their trophies by mail and gave their acceptance speeches, dressed in formal attire, by video. Those speeches were displayed on the screen at the virtual national convention for all registered participants to see.

Martinsville High School junior Symphanie Collins, daughter of Arlinda Suggs of Martinsville, is the chapter president. She has been to three or four NSBE national conventions, she said, and had been looking forward to the one in San Antonio.

The group was all set to go to the NSBE national convention in San Antonio, Texas, on March 26, when the cancellation was announced. Plane tickets had been purchased for 52 people, and another half-dozen were planning to go by car, Howell said. About half that number were students, and the rest were chaperones and leaders.

“We had eight competitions. We were ready to go,” Howell said.

The group was refunded all their money except for the convention registration, she said. “We were given the choice to move that registration to next year,” when the conference might be in person in Orlando, Fla., but the group chose to continue with this year’s convention, which was online.

They chose to participate in the virtual competition.

“It was amazing how they did” the convention online, Howell said.

Though some virtual meetings were held beginning that Monday, most participants took part from Wednesday through Saturday. Each local member participated from home over the internet.

Each registered participant received a code to use to sign into the offerings. Various workshops were presented throughout the days. A career fair was convened. Entertainment at night included the showing of the movies “Black Panther” and “Superman,” plus a game night, a comedy show and music by violinist Dominique Hammons.

Virtual meetings were even staged for the chaperones, just as they would have been at the convention center – “It was almost like we were really there,” Howell said.

Workshops and meetings were via Zoom, so everyone in the same group could see and talk with each other. They didn’t get to see each other during the evening events, because there were far too many viewers to be shown onscreen.

The only part of the convention that couldn’t be done was the slate of competitions, because they required materials and involvement of other organizations, Howell said. However, NSBE promised the students who had prepared for the competitions that they would receive recognition for them.

Normally, at an NSBE convention, “The amount of people attending that conference is crazy, and you learn a lot attending the conference,” Symphanie said.

At this year’s virtual conference, “everything still happens how it’s supposed to, as far as the sessions that we had,” Symphanie said. “It was just hard” juggling all the sessions she wanted to take.

This was the first NSBE convention for Carlisle School eighth-grader Destiny Johnson, daughter of Anishia Johnson of Spencer.

Hearing that the March convention in San Antonio was canceled “was pretty disappointing, since we had spent all that time trying to raise money” for the trip and convention, she said.

However, the online convention was good, she said. She joined in on sessions for trivia, math and body language.

Howell’s daughter, Erika Howell, is practically a lifelong member. She was a charter member of NSBE when she was in seventh grade, the year her mother started the local chapter. She remained with NSBE through her time at Martinsville High School – she’s a 2004 graduate – and has had her career with NSBE.

Erika Howell received her bachelor’s degree from Hope College in Michigan in 2008 and her master’s degree from Wilmington University in Delaware in 2019.

She will complete her first year as the director of operations and project management for NSBE in October. She has worked for NSBE in various other capacities and is stationed at NSBE’s world headquarters in Alexandria.

“It’s very much a growth experience,” she said. “It’s definitely something to where you never get bored. It’s always challenging.”

Erika Howell said she worked long and hard to help convert the originally planned convention to the very first online one, and it was “very rewarding to pull it together,” she said. Her role included working with sponsors Chevron and Dell Technologies, as well as the host, writer and comedian Lanie Love and “the Amanda Fields team for some entertainment.”

Even during the pandemic, “we have not stopped at all” with NSBE, Helen Howell said. “We are still having our meetings, everything’s going as planned, still going to do programs we have. We’re being very creative stepping outside the box. We’ve come up with some great ideas.”

The chapter met at MHS, where Howell was a teacher. Now it meets at New College Institute, and most of its equipment and materials are stored at Patrick Henry Community College’s IDEA Center, she said.

The 2021 NSBE convention is being planned, but because it’s not known yet whether life will be back to normal by then or the pandemic will still cause restrictions to be in place, NSBE “is preparing for both ways” – in person and online – Howell said.

Helen Howell of Martinsville, at home dressed in formal attire, gives her acceptance speech for NSBE's Golden Torch Award -- done over video, and presented at NSBE's national convention, which was held online, because of the pandemic. The chapter also won for Program of the Year.

Members of the Martinsville-Henry County chapter of the National Society of Black Engineers Jr. listen to presentation at NCI last fall.

MHC NSBE Jr. Chapter President Symphanie Collins has attended three or four NSBE national conventions, she said -- and then this year's, held virtually because of the pandemic. Chapter Director Helen Howell won the Golden Torch Award for Director of the Year, and the chapter won for Program of the Year.