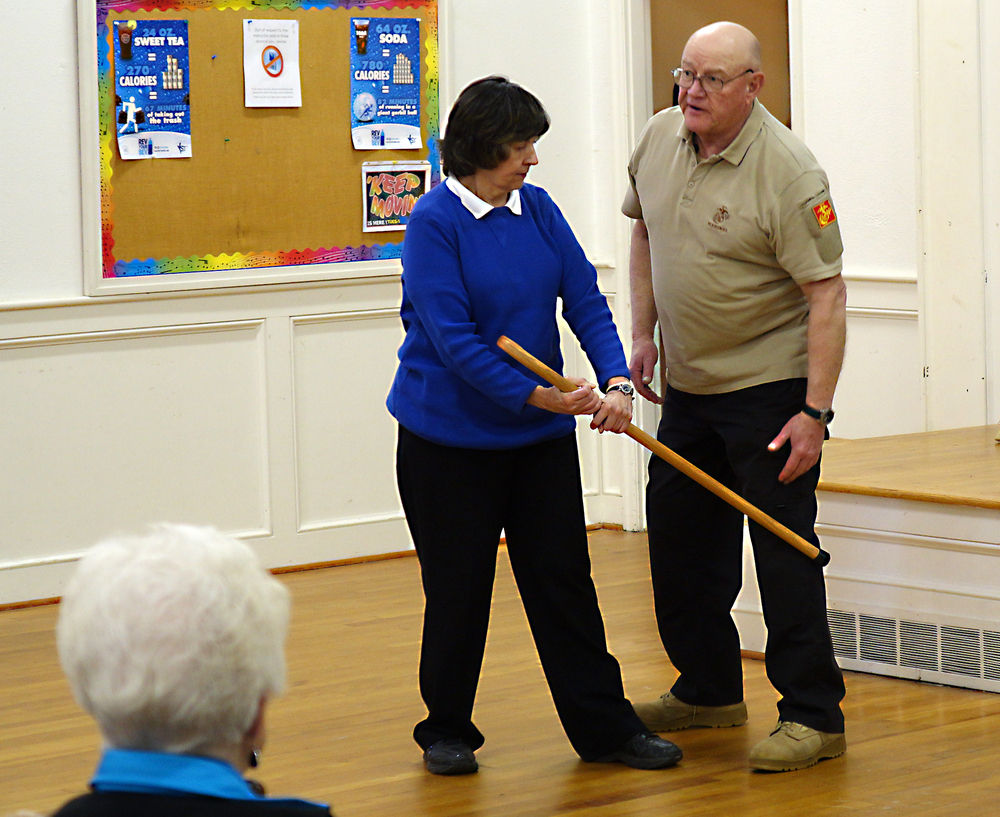 Cane Fu instructors Tom and Betty Ashmore demonstrate how to use a cane to strike someone in the peroneal nerve – which runs beside the knee – in order to incapacitate their leg. 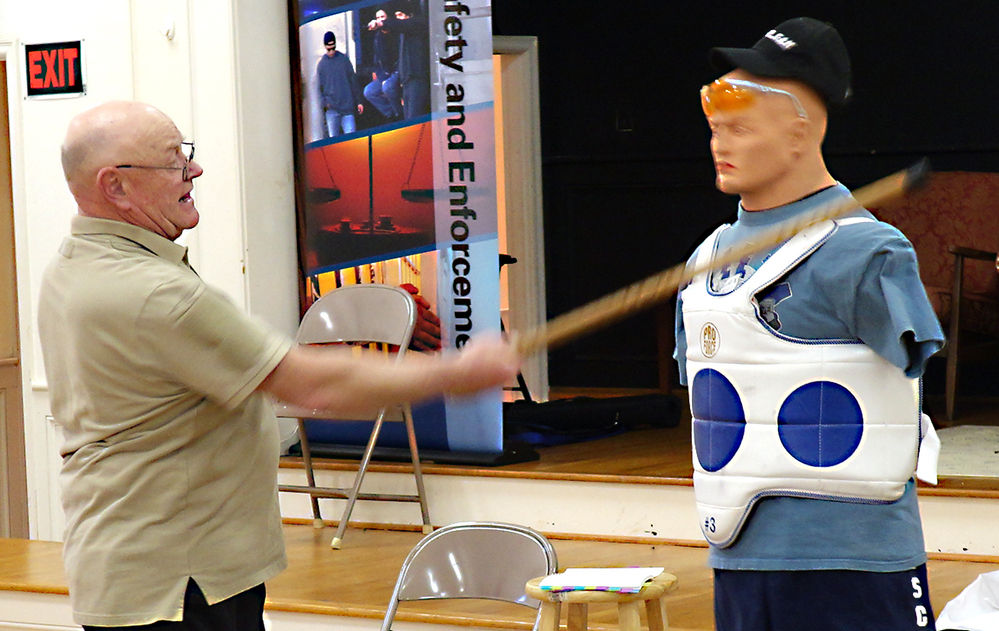 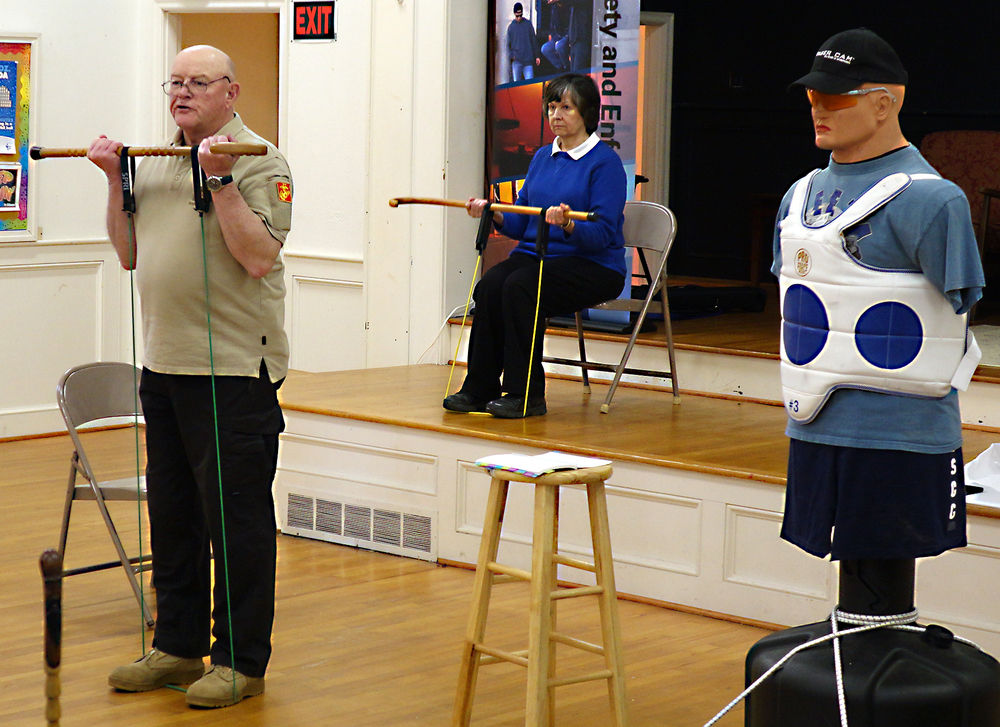 Cane Fu instructors Tom Ashmore and Betty Ashmore demonstrate how a cane and resistance bands can be used to perform a variety of beneficial stretches. (Bulletin photo by Ben R. Williams) 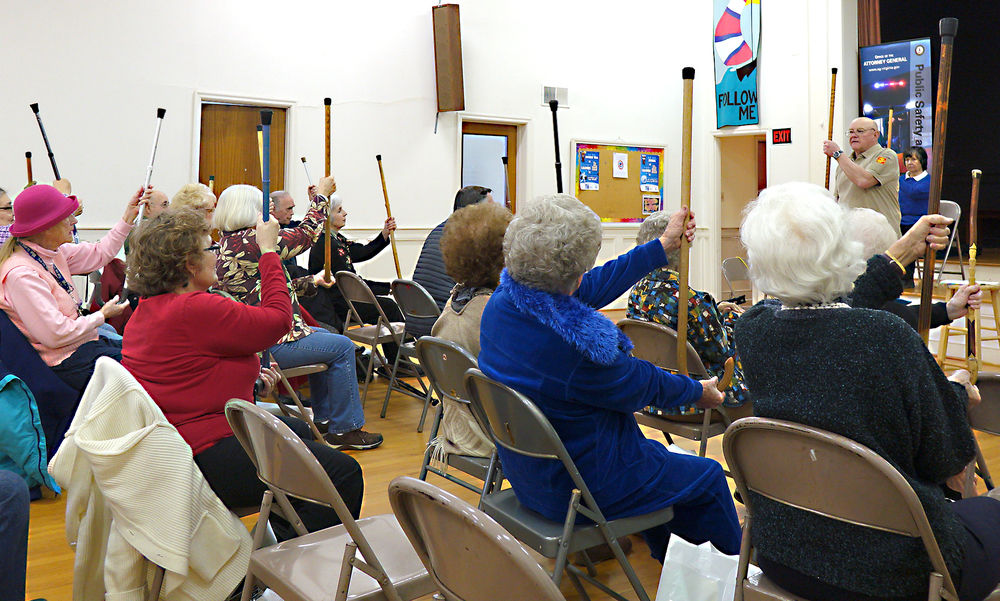 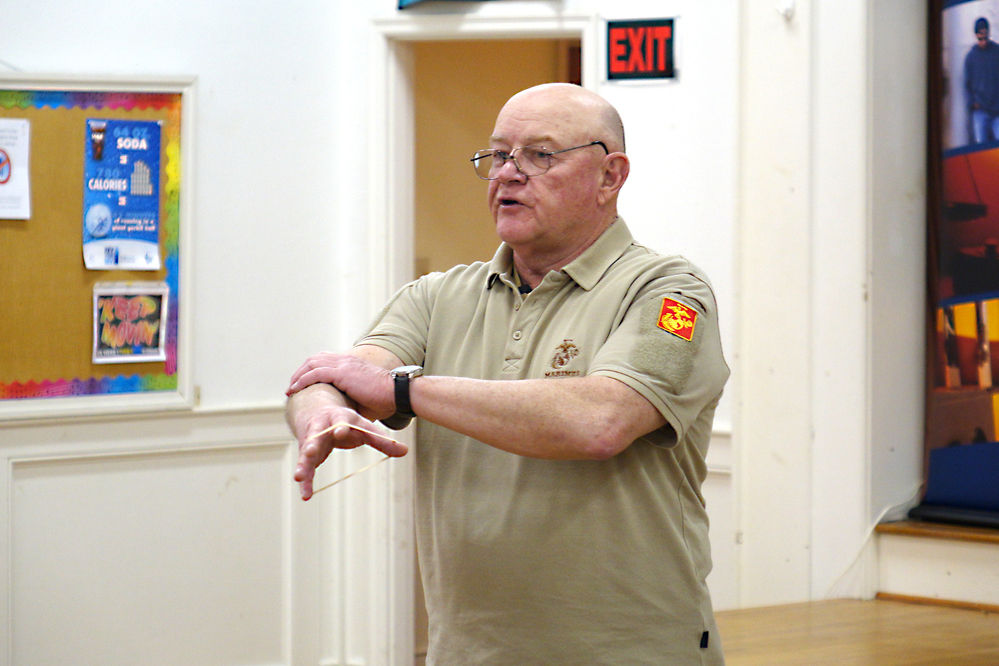 Cane Fu instructor Tom Ashmore demonstrates a simple finger stretching exercise that can be performed with a rubber band.

At a “Cane Fu” program Thursday, about 30 area residents learned the value of speaking softly and carrying a big stick.

During the program, Tom and Betty Ashmore of Powhatan guided the class through Cane Fu, an American martial art designed to give an advantage to those who must carry a cane due to age or disability.

Tom Ashmore is a disabled Vietnam veteran with more than 40 years of experience in various martial arts, and also is a professional tactical instructor and certified Cane Fu instructor. Betty, his wife of 48 years, is a certified massage therapist with a vast knowledge of body mechanics.

Cane Fu is about more than self-defense, Tom Ashmore explained: It is about building situational awareness, strength training, stretching and regaining lost balance.

The Ashmores led the group through several different stretching and strength training exercises that can be performed with a cane. With the combination of a cane, a resistance band and ingenuity, Tom Ashmore said, anyone can have a complete gym that can be carried and used anywhere.

One of the advantages of the cane for self-defense, he said, is that it is always close at hand, unlike a can of pepper spray or a concealed pistol.

Ashmore cited the “21-foot rule,” which states that a healthy attacker can cross 21 feet in just one and a half seconds, which is too fast for the average person to draw a concealed weapon.

A cane, however, is right in a person’s hand and can be quickly drawn up to provide a defense.

Unlike traditional weapons, he said, the cane is a medical support device, and because of the Americans with Disabilities Act, can be carried anywhere.

Ashmore stressed the importance of defense, rather than offense.

“The best block in any fight is not to be there,” he said, adding that it’s up to the individual whether to decide to defend themselves or not.

“But if you have to fight, fight to win,” he added.

At the end of the program, Ashmore demonstrated several different strikes on a dummy, showing the attendees different places to hit an attacker in order to incapacitate them as quickly as possible.

Many view their canes as a sign of weakness, Ashmore said, but with Cane Fu, a cane can be transformed into a badge of courage.

After all, he said, quoting the old proverb, “Old age and treachery will always defeat youth and skill.”

WATCH NOW: Body found in car confirmed to be Janeen Valentine of Ridgeway

The car she had been driving was found in a ravine on Nov. 8. She had been missing since July 3.

He could have died from a drug overdose.

There were 176 sealed indictments, and about half of those charged remain at large.

Cause of death of a woman accused of helping kill her lover's wife awaits toxicology report.

The Henry County Sheriff's Office is searching for a 15-year-old boy that is missing from the area and asking the public for help in finding him.

A female passenger was injured and transported to the hospital.

A Ridgeway man is hospitalized, and his brother from Axton is in jail.

Raising our voices in thanks: During the tragedy of COVID-19, we found voices of true belief in the spirit of Thanksgiving Day.

These stories are told by four people from the Southside who shove aside the virus and share their spirit.

Cane Fu instructors Tom and Betty Ashmore demonstrate how to use a cane to strike someone in the peroneal nerve – which runs beside the knee – in order to incapacitate their leg.

Cane Fu instructors Tom Ashmore and Betty Ashmore demonstrate how a cane and resistance bands can be used to perform a variety of beneficial stretches. (Bulletin photo by Ben R. Williams)

Cane Fu instructor Tom Ashmore demonstrates a simple finger stretching exercise that can be performed with a rubber band.