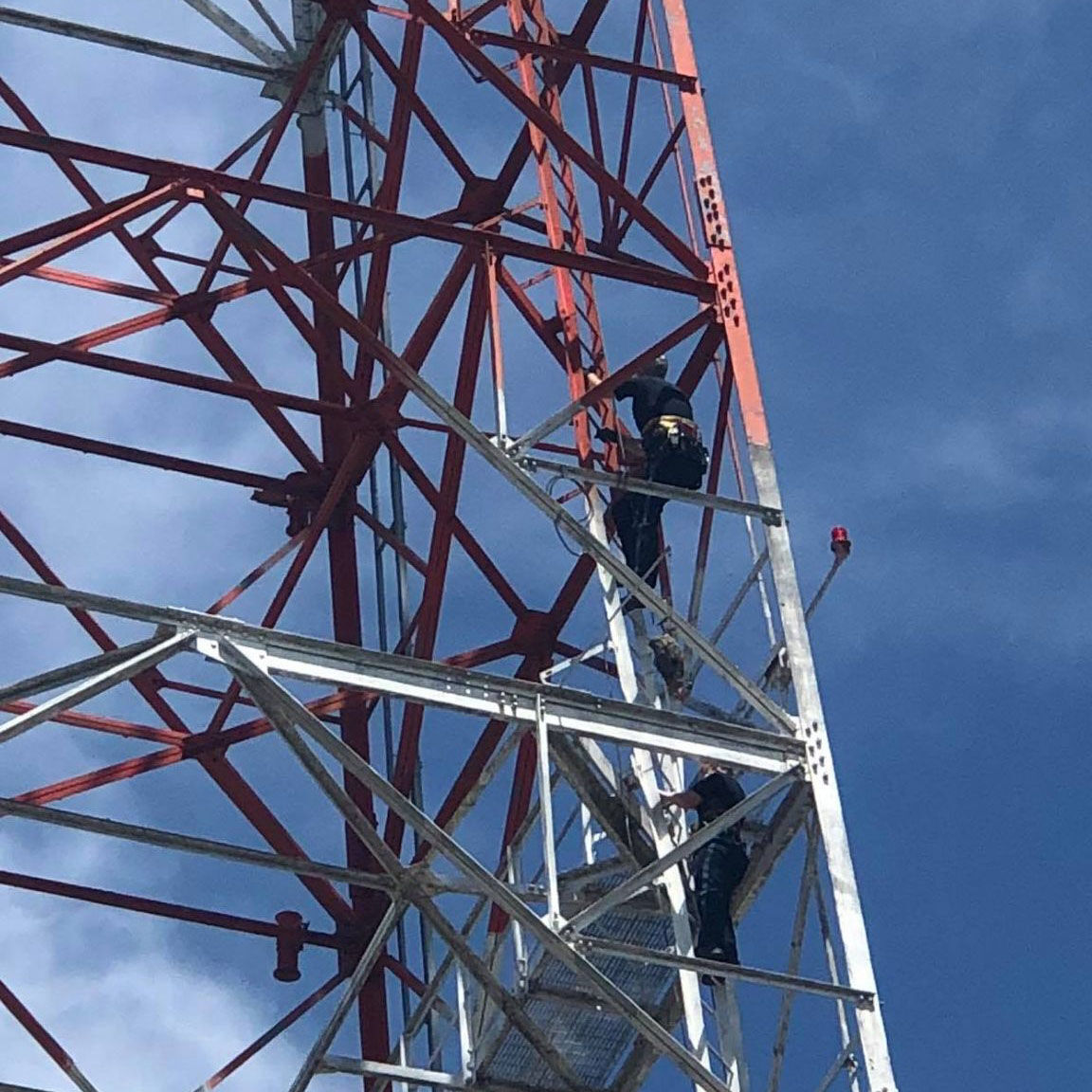 Culpeper Police officers Brittany Jenkins and Al Cooper climb a 250-feet tower at the Verizon headquarters to rescue a suicidal subject at the top. 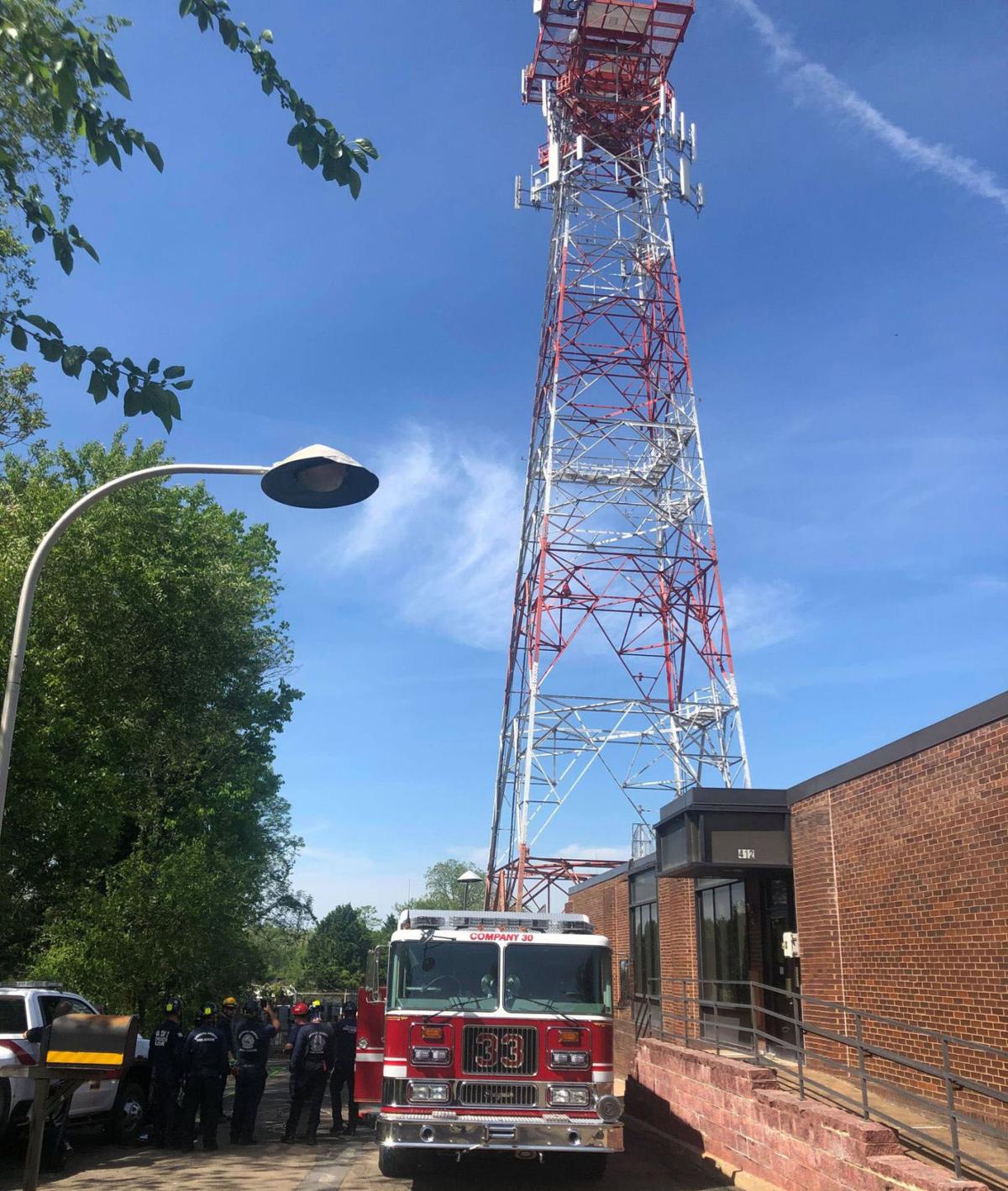 An ongoing rescue is taking place at the Verizon tower in town of Culpeper.

In a high stress matter of life and death, many came together Sunday afternoon in downtown Culpeper to save a suicidal, 50-year-old man who climbed to the top of a 250-feet-tall cell tower to end his life.

Multiple calls came into Culpeper County E911 starting around 12:18 p.m. on May 2 about a male subject climbing a cellphone tower at the Verizon building in the 600-block of Old Brandy Road at East Piedmont Street.

The man was yelling suicidal statements as he climbed the tower, according to a news release Monday morning from Culpeper Police Department spokeswoman Officer Julia Cole.

Officers quickly responded to the area and set up a safety perimeter. Shortly after their arrival, the male subject reached the top platform of the tower with upper platforms only accessible by ladder.

"It is a major incident," Chilton said Sunday from the scene. He noted Monday morning there were several times he thought the man, unsteady on his feet. was going to jump or fall when he got very close to the edge of the tall structure, and no safety fence to prevent it.

"This is going to be bad," Chilton said of a potential fatal outcome.

Drones were deployed for surveillance as Jenkins and Cooper began the rescue attempt, which was filmed from start to finish, Chilton said. All along, the male subject continued to exhibit self-harming behaviors and armed himself with a pair of improvised weapons, Cole said.

From the second platform, Jenkins and Cooper successfully, verbally de-escalated the male subject to the point that they could safely join him on the top platform of the tower.

After further negotiation, he agreed to climb down to the second platform, with higher railings, making it the safest staging point for all involved. At that location, the male was detained for his safety.

Due to the totality of circumstances, it was determined that the male could not safely descend further on his own without a safety harness, Cole said.

Responding to assist with this operation on a Sunday afternoon were members of Division 2 Heavy Technical Rescue team comprised of firefighters from Augusta County, Harrisonburg, Rockingham County, Staunton, and Waynesboro. With their assistance and equipment, the male and both officers safely descended the tower.

Once on the ground, the man was taken into custody on an officer-initiated Emergency Custody Order and transported to Novant Health UVA Culpeper Medical Center for a mental health evaluation and treatment of self-inflicted injuries.

“This was the best possible resolution,” said Culpeper PD Chief Chris Jenkins, “and an excellent example of officer bravery during a high risk situation. Even though Lt. Jenkins and Ofc. Cooper were wearing safety harnesses, there was nothing for them to hook on to.

“They walked into a mental health crisis at 250-feet in the air with no safety net and no backup on the platforms. No one is calm during the early stages of a crisis. It was only due to the officers’ training, experience, and empathy that they were able to deescalate him and get the man to safety.”

Mutual aid agencies that responded allowed the incident to be quickly and safely resolved, the chief said.

“I am grateful that this man is still alive and we hope he receives all of the support and services needed to make a full recovery,” Jenkins said.

The Culpeper Police Department reminded anyone considering self-harm that they are not alone and help is waiting. The National Suicide Prevention Hotline is 800-273- 8255 and the SAMHSA (Substance Abuse and Mental Health Services Administration) Hotline is 1-800-662-HELP (4357). Both are confidential, free, and available 24/7 in English or Spanish.

Israel strike in Gaza destroys building with AP, other media

A man who allegedly romanced at least eight women in three states that he met through dating websites out of $267,361 has been charged with mail fraud.

UPDATE: Glenn Youngkin is the GOP nominee for governor

Glenn Youngkin, the multimillionaire businessman who sought to cast himself as a political outsider with the best chance to challenge Democratic power, will represent Republicans in the race to become Virginia’s next governor.

Citing legislative and sovereign immunity, a federal judge Thursday tossed out a suit against the Virginia Senate and its clerk filed by Sen. Amanda Chase, R-Chesterfield, in response to her January censure.

A federal judge on Tuesday sentenced the former Rockbridge Regional Jail superintendent to more than four years in prison for taking bribes in exchange for special treatment for one inmate, and for failing to provide adequate care for two others who were in custody.

CVS and Walgreens locations in Virginia will start vaccinating the 12-to-15 age group on Thursday.

The latest victims of supply shortages? Sauce-loving customers at Chick-fil-A.

FDA authorized Pfizer vaccine for 12-to-15 age group but Va. still needs to wait for CDC before starting vaccinations

Virginia parents wanting to vaccinate their kids in the 12-to-15 age group with Pfizer's coronavirus shots still need to wait before they can make an appointment or head to a vaccination clinic.

Culpeper Police officers Brittany Jenkins and Al Cooper climb a 250-feet tower at the Verizon headquarters to rescue a suicidal subject at the top.

An ongoing rescue is taking place at the Verizon tower in town of Culpeper.