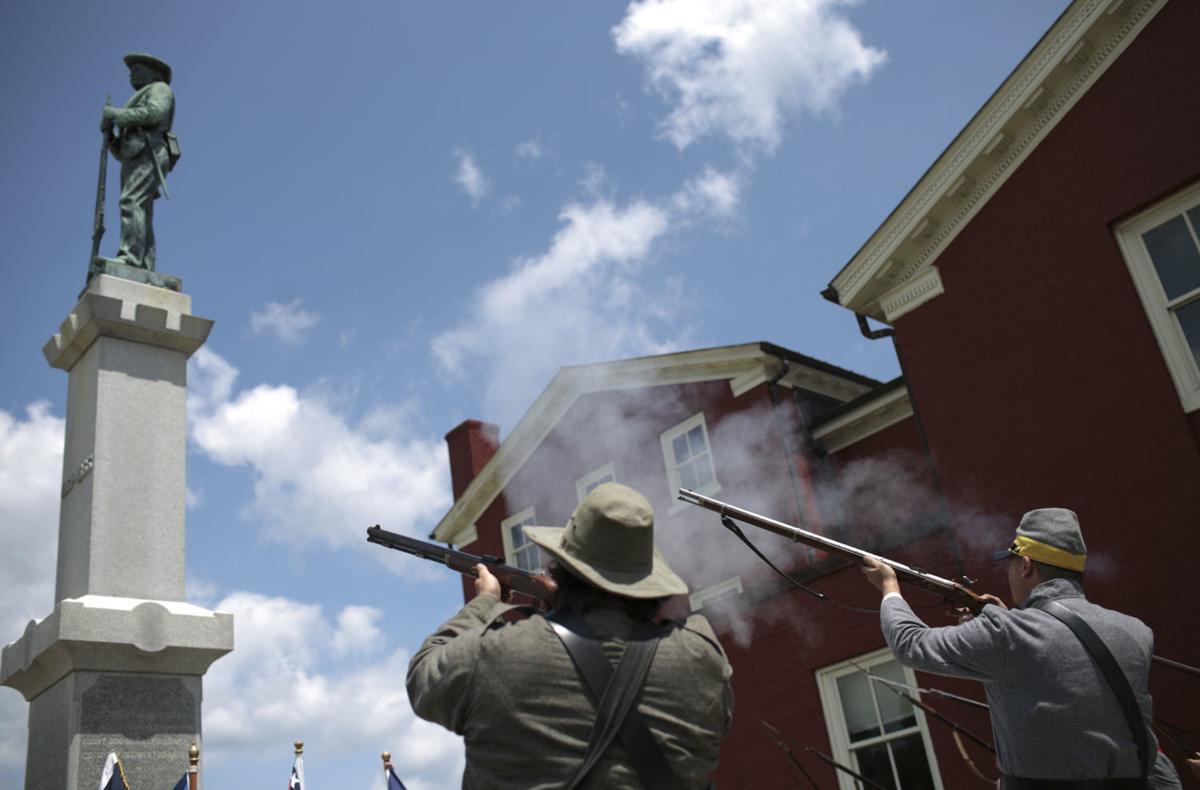 Members of the Sons of Confederate Veterans fire a salute in Pearisburg below the Giles County Courthouse’s Confederate monument. 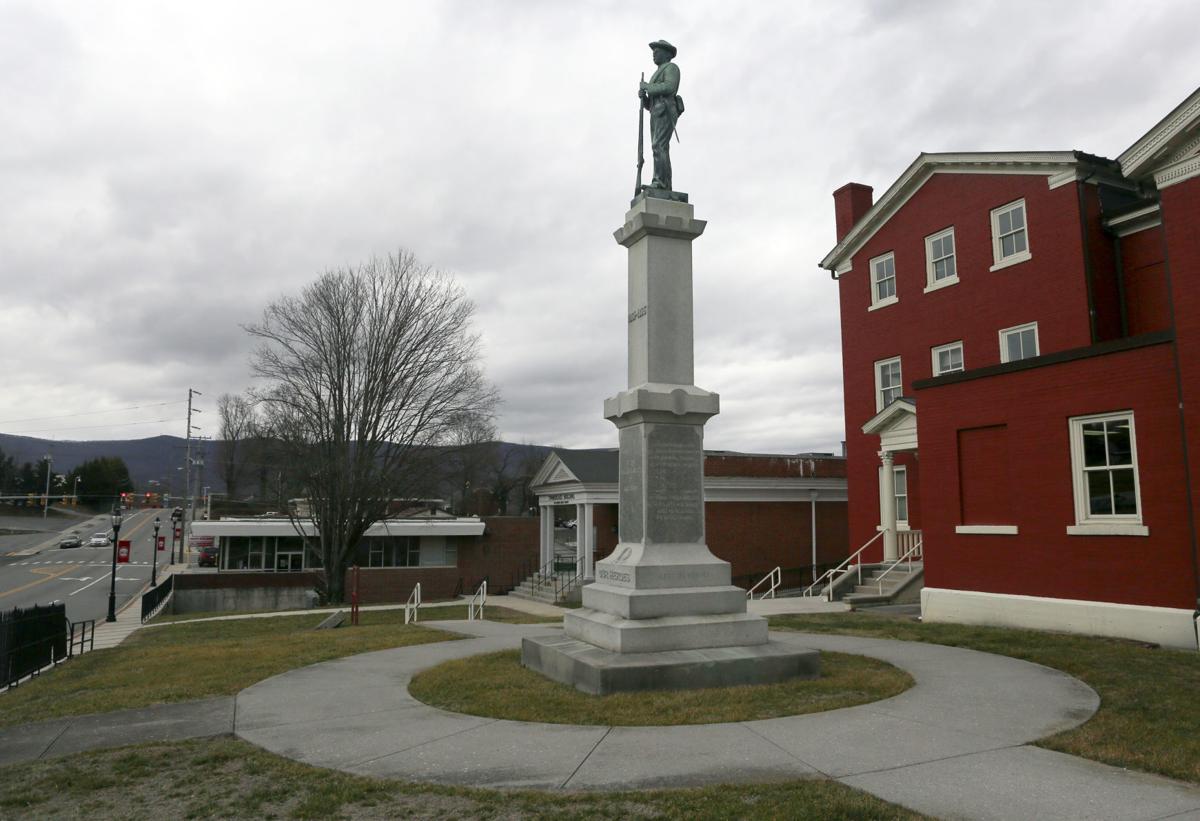 A monument dedicated to Confederate soldiers of Giles County has stood at the courthouse lawn for more than 100 years. 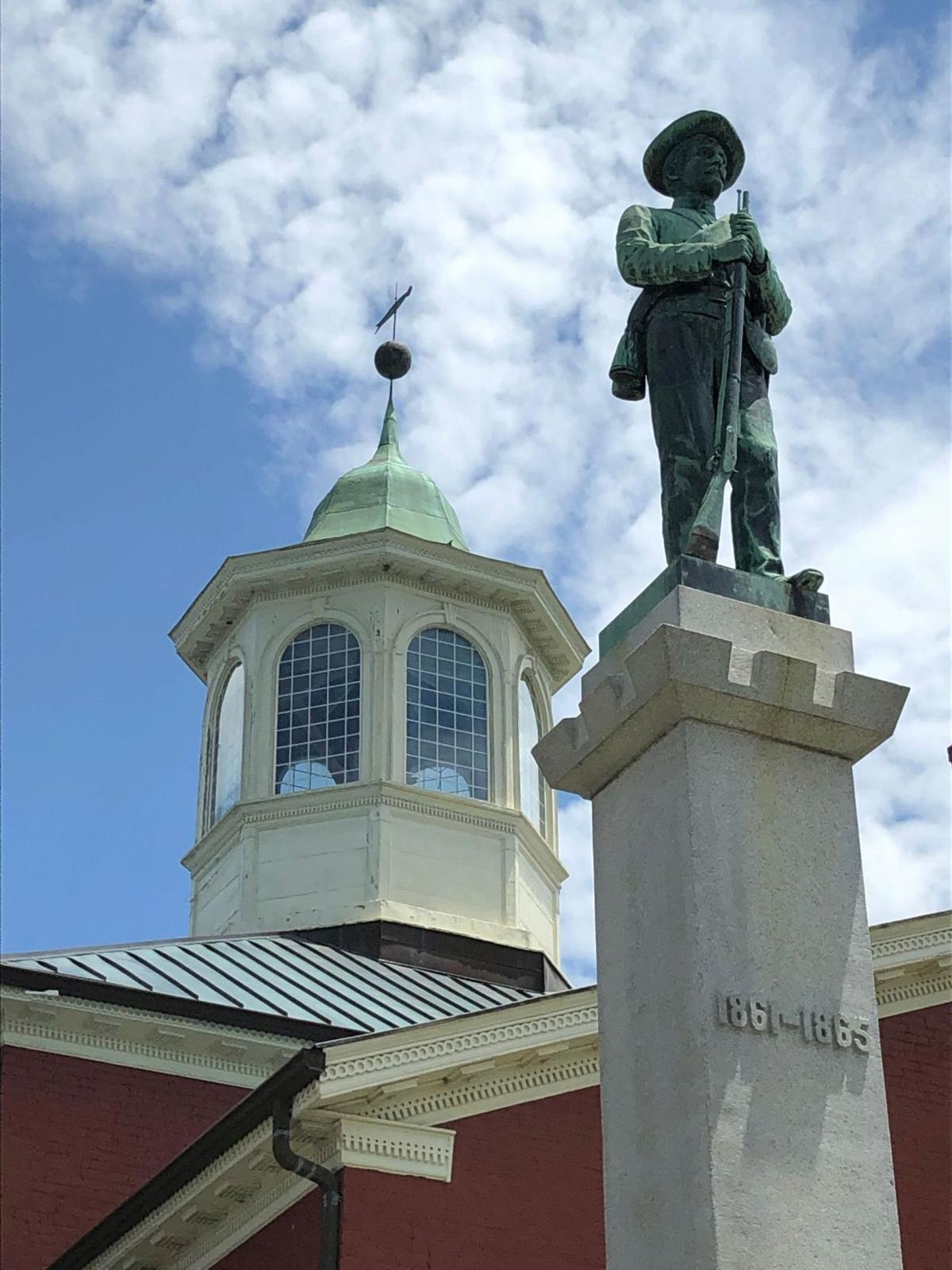 The Confederate memorial statue at the Giles County Courthouse in Pearisburg has now become part of an argument about fairness in an ongoing drug case. 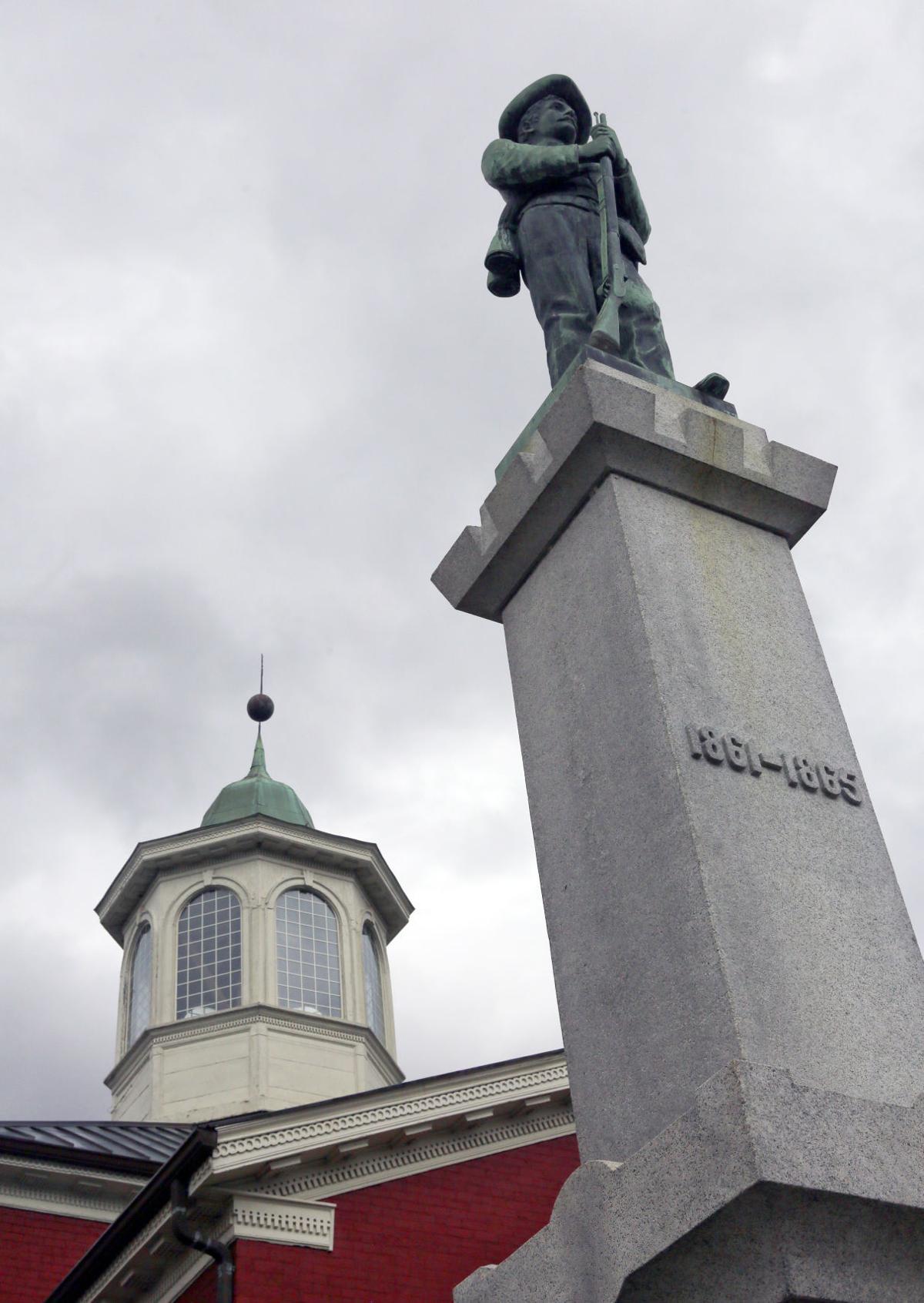 The Confederate monument at the Giles County Courthouse in Pearisburg has become part of an ongoing court case.

PEARISBURG — How can a Black defendant get a fair trial in the shadow of a Confederate monument?

That was part of an argument made this week in a drug case in Giles County, in a courthouse where a statue of a Confederate soldier has stood guard outside for 111 years.

Defense attorney Dennis Nagel of Christiansburg, representing a Black man convicted in February of methamphetamine distribution and now up for sentencing, said Tuesday that he wanted to emphasize that he was not accusing the prosecutor or jurors of racism.

But in a written motion and in arguments at a Monday hearing, Nagel told a judge his client was being treated differently than a white co-defendant. He questioned if the monument that jurors saw each day as they entered the courthouse for his client’s trial — a statue labeled “Our Heroes” in large letters — created an inherently unfair atmosphere for their deliberations.

“We should recognize things that do not treat people equally,” Nagel said Tuesday. “The Confederate legacy is one of unequal treatment.”

Anne Coughlin and Richard Schragger, professors at the University of Virginia School of Law who have written about Confederate symbols on public property, said Wednesday that a statue at a courthouse involves different issues than one in a park or other location.

Schragger called Nagel’s argument “fairly novel” — “that a monument outside the courtroom somehow infected the jury or introduced a bias.” But he predicted questions about monuments’ placement would be raised again — both by attorneys and by communities struggling with what to do with Confederate memorials.

Coughlin said that the cases she was familiar with related to Confederate symbols actually inside of courthouses, including a portrait of Gen. Robert E. Lee hanging in a Fluvanna County courtroom. From what she recalled, judges had turned down motions related to those symbols, Coughlin said — but that might be changing, she added.

“This is a new era. People are becoming much more sympathetic and having their eyes opened,” Coughlin said.

Giles County Commonwealth’s Attorney Bobby Lilly said Wednesday that he thought everyone involved in the county’s legal system “does everything humanly possible” to act without regard to race.

However, Lilly said he could not comment on most of Nagel’s argument because Circuit Court Judge Lee Harrell addressed only part of it on Monday, agreeing to move the sentencing of Nagel’s client back to September after the scheduled sentencing of the white co-defendant.

Until Harrell ruled on the unequal treatment portions of Nagel’s motion, Lilly said, he felt bound not to discuss its details.

Lilly did note, however, that Nagel did not raise any race-related issues earlier in the case, and called it inappropriate that the attorney was doing so now when Nagel’s client is facing a jury recommendation for a severe sentence.

Nagel said that he would have brought up the monument earlier but though he’d walked by it many times in years of practice, had not thought much about it.

He said that his realization about the statue’s significance came after the February trial from seeing what was happening with statues in Richmond and elsewhere, and when another attorney told him about a different Black defendant looking out from the Giles County Courthouse, seeing the monument and exclaiming that he would never get a fair trial.

“How am I ignoring something that is as plain as day to that defendant?” Nagel said he asked himself.

The Giles County case began with two arrests in October 2018 in a Narrows motel room.

Melvin Cecil Chapman Jr., 51, of Lindside, West Virginia, not far over the state line from Giles County, and Chyanne Nicole Neely, 34, of Rich Creek, were in the motel room, along with a quantity of methamphetamine. Chapman is Black and Neely, white. Both had at least one prior drug conviction. Neely was granted a bond, Chapman was not.

Nagel said in his motion that the motel room was rented in Neely’s name, that Neely was seen trying to hide the meth, and that it was only her testimony that implicated Chapman in distributing it.

Lilly said he disagreed and that the statements of other witnesses, the location of the drug near Chapman’s belongings, and the amount of meth present also pointed to Chapman’s involvement.

Neely agreed to cooperate with investigators and a plea hearing was scheduled for her, then rescheduled 10 times as Chapman took his case to a jury.

At Chapman’s two-day trial in February, Neely testified against him and Chapman was convicted of distributing a Schedule II drug, third or subsequent offense. The jury recommended a sentence of 30 years in prison and a fine of $20,000.

In Virginia, sentencing hearings are held separately from jury trials. Judges usually follow a jury’s recommendation in sentencing. But Nagel argued that in this case, Judge Harrell should give greater consideration to sentencing guidelines that would call for something less than 30 years, and also should take into account whatever sentence Neely was given for what Nagel argued was a greater offense.

It is not uncommon for defendants who cooperate with investigators to be sentenced last, with prosecutors basing their sentencing recommendations on how much aid a defendant gave. But Nagel argued that Neely’s case was being “artificially delayed” with its many reschedulings.

“This is an issue of fundamental fairness, of the equal protection of an opportunity to present the evidence about the co-defendant,” Nagel said in his motion.

In his motion, Nagel described Neely as “implicating an innocent person who has the misfortune of being readily available as her stooge.”

Nagel said in his motion that the delays of Neely’s plea and sentencing could be reason to ask for a new trial.

On Tuesday, Nagel said that the next time he represents a minority defendant in Giles County — or any other jurisdiction with a symbol of the Confederacy next to the courthouse — he would seek a change of venue.

“The thing is, we all hold biases and sometimes we’re unconscious of our biases,” Nagel said. And how a community handles Confederate memorials may indicate those biases, Nagel added.

The new date for Chapman’s sentencing is Sept. 21.

Neely’s plea hearing, on a charge of distributing a Schedule II drug after a prior distribution conviction, is set for July 22.

Lilly said he would have to talk to Neely’s attorney about whether that date would change.

Bills raise questions about some of Southwest Virginia's own Confederate symbols

PEARISBURG — “Lest We Forget” is one of the messages inscribed on the marble base of the copper soldier overlooking Main Street and the grounds of the Giles County courthouse.

Members of the Sons of Confederate Veterans fire a salute in Pearisburg below the Giles County Courthouse’s Confederate monument.

A monument dedicated to Confederate soldiers of Giles County has stood at the courthouse lawn for more than 100 years.

The Confederate memorial statue at the Giles County Courthouse in Pearisburg has now become part of an argument about fairness in an ongoing drug case.

The Confederate monument at the Giles County Courthouse in Pearisburg has become part of an ongoing court case. 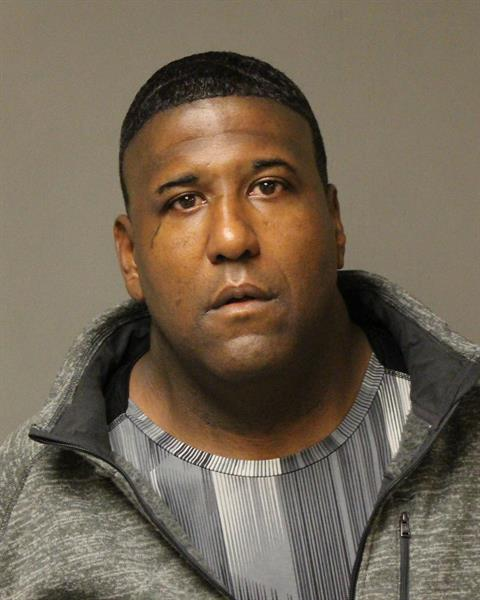 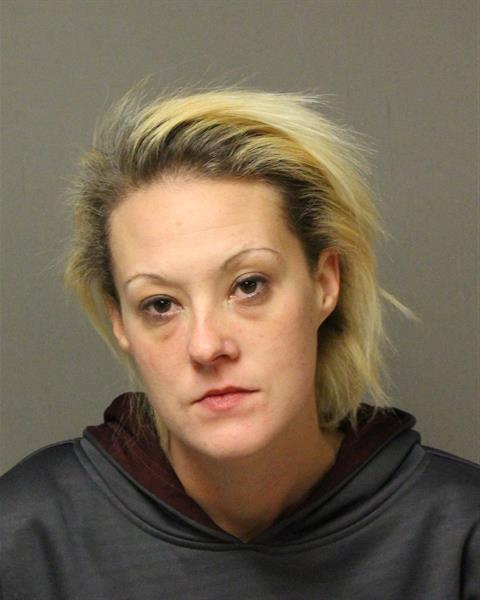