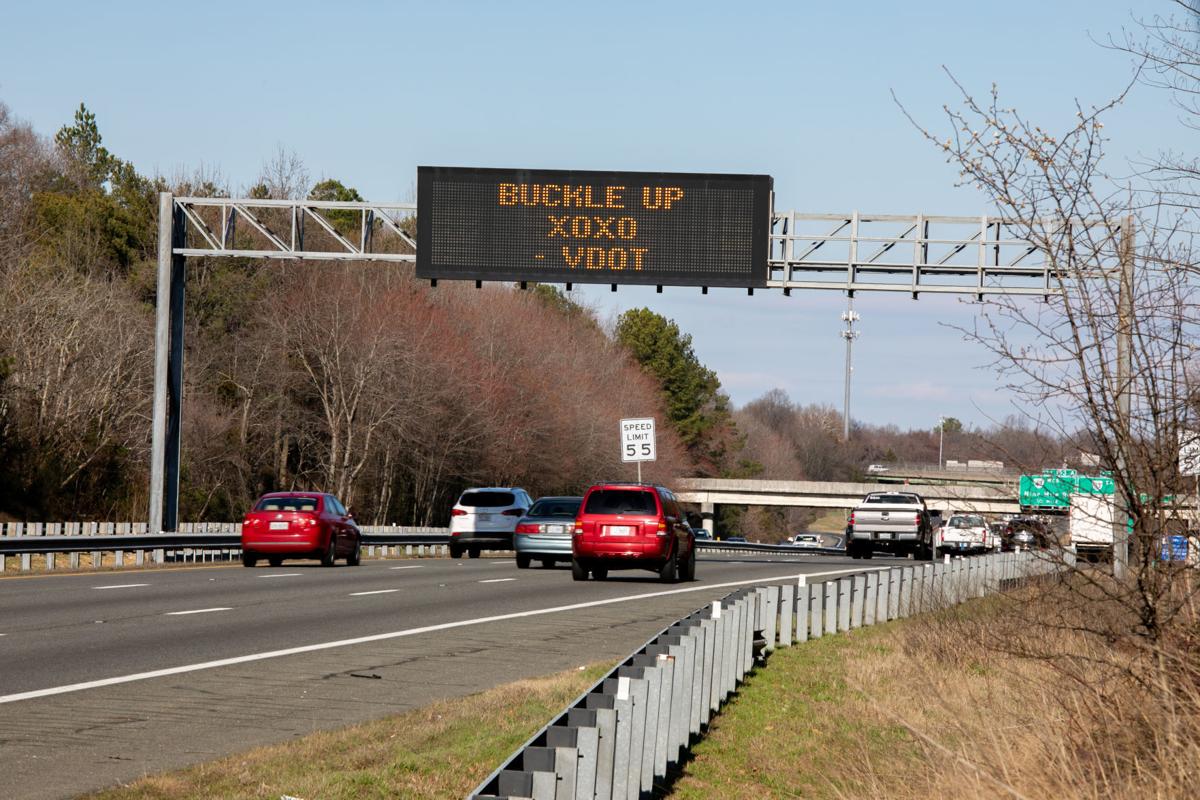 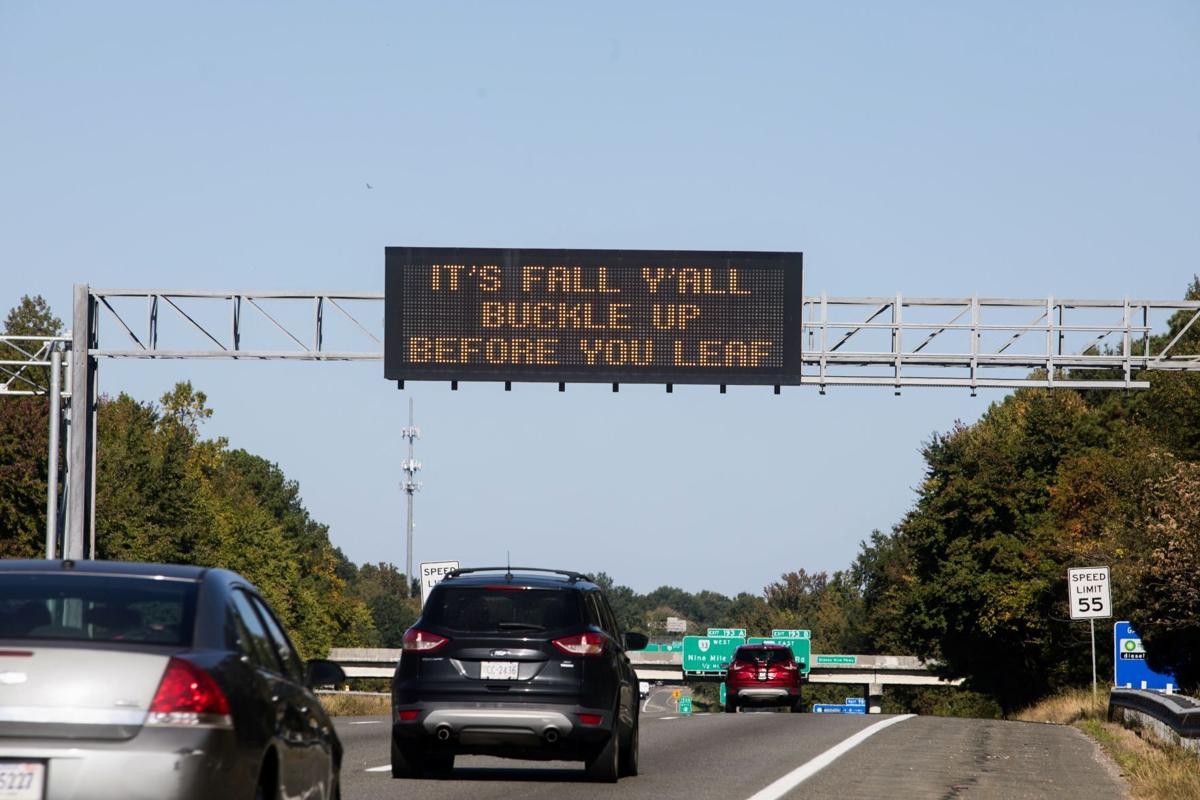 BY SCOTT SHENK The Free Lance-Star

Anyone who’s traveled Interstate 95 has seen the overhead digital signs, which change to provide a range of messages on traffic conditions, crashes and the like.

The Virginia Department of Transportation has taken that digital sign use to another level with a “themed messaging” approach that started as a pilot project in 2017 during National Work Zone Awareness Week.

VDOT works with the Virginia State Police, the Virginia Department of Motor Vehicles and the Governor’s Executive Leadership Team on Highway Safety in developing the messages that appear on the interstate signs across the state.

Rob Cary, VDOT’s chief deputy commissioner, told the Commonwealth Transportation Board about the program during a meeting last week in Richmond.

He repeated some of the messages, including one holiday-themed message that drew some laughter: “Visiting your in-laws? Slow down. Get there late.”

The messages often focus on things like speeding, impaired driving, seat-belt use and distracted driving, all concerns on state roads, Cary said.

Cary told the CTB that the messages aren’t gimmicks.

“The messaging for these signs is based on scientific research,” he said.

VDOT partnered with Virginia Tech researchers to conduct a study of 300 drivers to determine the impact of the messages VDOT uses.

The participants wore magnetic imaging helmets while looking at the messages. The helmets detected the blood flow in the brain based on study participants’ reactions to the messages. The study measured neurocognitive responses, comprehension, recall and the likelihood of “perceived behavioral changes.”

The study found that the messaging worked, with Cary noting that information focused on distracted driving, humor and word play “were effective techniques.”

He noted one message that went viral on social media not long ago: “Driving Fast And Furious? That’s Ludacris!”

That message was liked by the rapper Ludacris and drew media coverage, which helped VDOT’s messaging spread from road signs to social media.

On the downside, Cary noted the grim driving statistics from 2020, when deadly crashes spiked even though fewer vehicles were on the roads during the pandemic.

There were 22,479 total speed-related crashes in the state in 2020, a slight decrease compared with 2019. But there were 406 speed-related fatal crashes on state roads last year, a 16.9 percent increase over the previous year. Among those crashes were 182 deaths on urban roads, such as I–95, a 46.8 percent increase.

Deaths of unbuckled drivers and passengers also spiked in 2020, increasing by 12.83 percent to 343 fatalities, according to VDOT.

Those numbers aren’t a ringing endorsement for the overhead messaging approach.

But it’s tough to trust any transportation numbers from 2020, the mother of outliers when it comes to traffic data.

VDOT is confident in the digital messaging approach—through the overhead signs and social media presence.

“It’s fun, it’s catchy, but it’s way more than that,” Cary told the CTB members, several of whom spoke approvingly of the approach. “We can take it to the bank that we’re making a difference.”

At the very least, the messaging program is getting the word out to more people and has created more conversation about safety.

30 Richmond employees are on unpaid leave for not complying with vaccine mandate; 360 applied for exemption

About 10% of Richmond city employees will not be required to get a COVID-19 vaccine after applying for an exemption to the city’s shot mandate.

Sovah Health was treating 49 patients across both the Danville and Martinsville facilities on Wednesday.

Virginia Beach woman gets 12 years for what could be biggest coupon scheme in U.S. history

It was described in court papers as possibly the biggest counterfeit coupon scheme in history, costing about 100 retailers and manufacturers more than $31 million in losses. And the mastermind behind it all? A Virginia Beach entrepreneur and mother of three who’d been designing and printing the highly realistic coupons from her home computer for years. On Tuesday, Lori Ann Villanueva Talens ...

UNC Rockingham Health Care and Annie Penn Hospital are seeing unprecedented numbers of people coming to emergency departments, most of whom are unvaccinated.

The first gubernatorial debate between Democrat Terry McAuliffe and Republican Glenn Youngkin on Thursday was a combative standoff over political differences as much as personal jabs.

'This is the new Danville.' Architectural design of casino — featuring iconic smokestacks — revealed in ceremony

The $500 million resort is expected to break ground by the end of the year.

Leader of massive robocall scam with 4,000 victims in the U.S. gets 22-year prison term

Among the victims of the India-based scam, which raked in more than $10 million, was an elderly Virginia woman who lost $445,000.

More Virginia children are hospitalized for COVID than ever before

The pandemic's silver lining, that children were spared from severe illness, no longer appears to be true.

Jason Lail was healthy before he got COVID-19. He loved to hunt and fish. He played with his children. He had no medical conditions.

Jenkins, 68, had been battling COVID-19-induced double pneumonia that ultimately led to kidney failure.