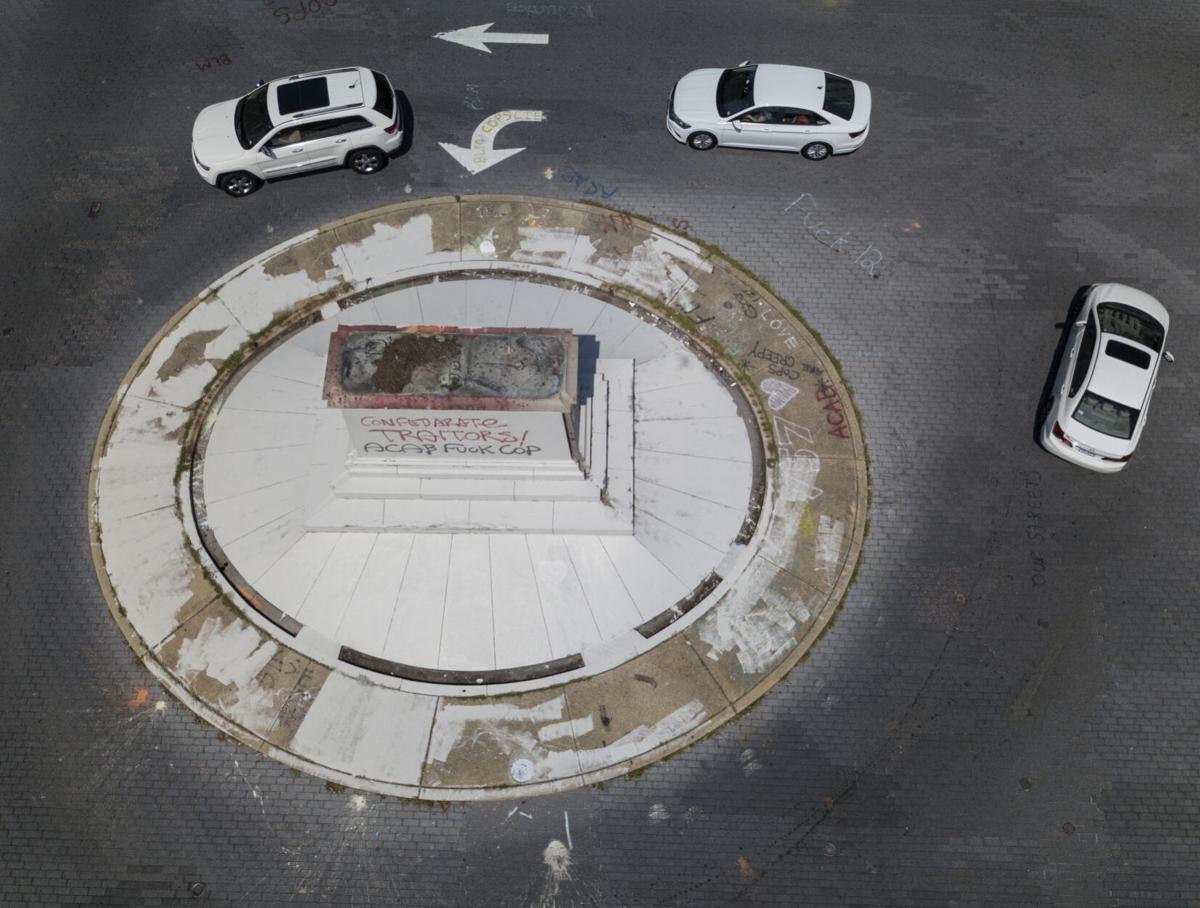 Aerial photo of a pedestal, where the J.E.B. Stuart statue was taken down, on Monument Avenue in Richmond on Tuesday, July 11, 2020. 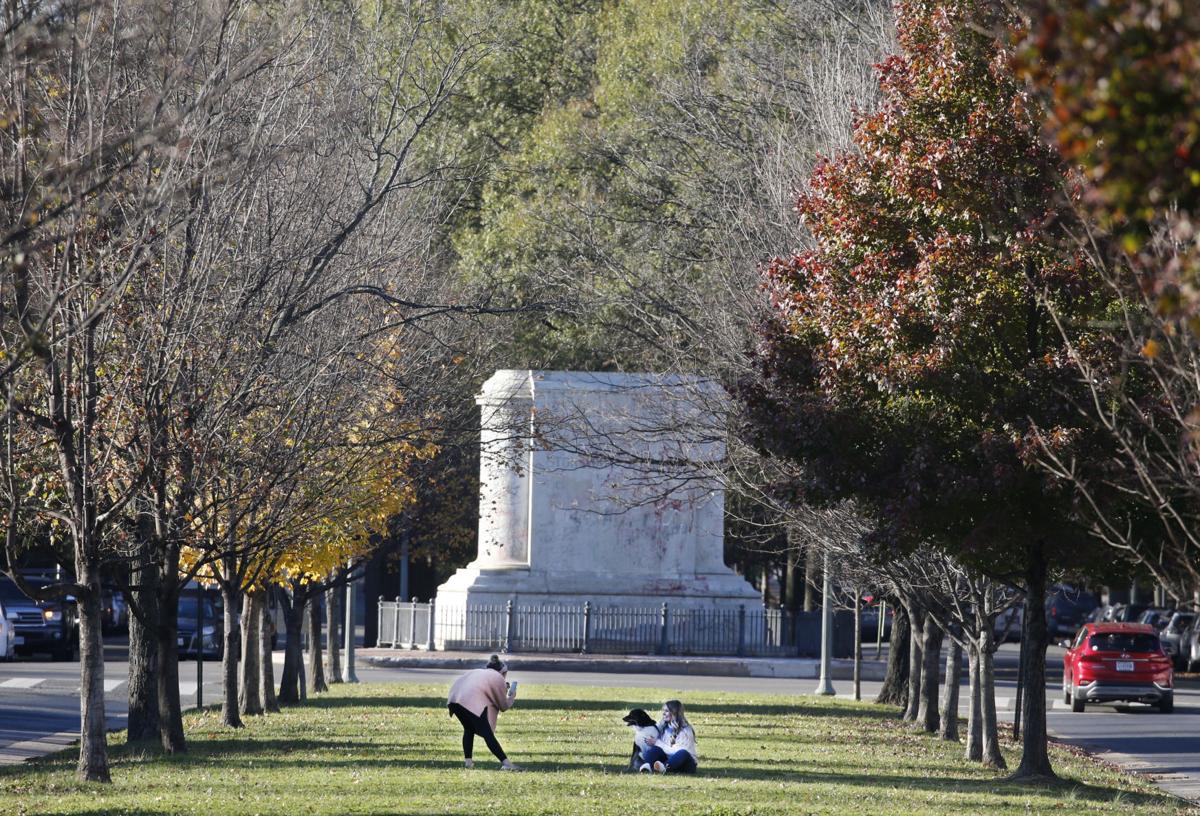 The Richmond City Council voted on Aug. 3 to ratify Mayor Levar Stoney’s removal order but after more than a dozen statues had been removed.

The Virginia Supreme Court is being asked to reverse a lower court judge who rejected a request to put back the monuments removed from city property last summer.

The petition was filed Wednesday by the same plaintiffs fighting the removal of the Robert E. Lee statue on state property. They allege city officials did not adhere to procedures set out in a new state law permitting localities to take down war memorials.

On July 1, Richmond Mayor Levar Stoney ordered the removal of Confederate monuments on city property. The City Council voted on Aug. 3 to ratify Stoney’s removal order but after more than a dozen statues had been removed.

Removal of the Lee monument, on state — not city — property on Monument Avenue, ordered by Gov. Ralph Northam, has been blocked by another case now before the Virginia Supreme Court.

Patrick M. McSweeney, a lawyer representing the plaintiffs in both cases, filed a petition this week with the Virginia Supreme Court asking the justices to reverse last month’s decision in Richmond Circuit Court that denied a request for an injunction that would restore the monuments back to where they had been.

The plaintiffs argue in their petition that Circuit Court Judge Reilly Marchant abused his discretion when denying the injunction even though they say Marchant conceded that Stoney’s action was unlawful.

The transcript of the Feb. 16 hearing quotes Marchant as saying that if the monuments were returned, it was unlikely the City Council would vote to leave them up.

“Somehow putting them back up and then having City Council go back through the process again,” Marchant said. “Weighing the factors does not weigh in favor of doing that.”

“It’s troublesome because, as Mr. McSweeney rightly points out, why would you allow a wrongful act to be rewarded or to go without remedy?” Marchant added, according to the petition.

That is among the arguments the plaintiffs are now making to the Virginia Supreme Court.

“Unlawful acts must not be rewarded by allowing the benefit of the unlawful act to continue to be enjoyed by City Officials,” argues the petition.

The petition contends that Stoney had no authority to order the removal of the monuments as the mayor claimed under a declaration of a local emergency due to civil unrest.

“His stated reasons for his order were that monuments posed a ‘severe and immediate threat to public safety’ because protesters would attempt to pull them down on their own and that the immediate removal ‘would expedite the healing process,’ ” the petition states.

It further contends that Stoney “failed to enforce applicable laws to prevent civil unrest, including illegal activities in the proximity of the monuments, and facilitated and encouraged activities that were in violation of state law [and] the City Code.”

The petition asserts that Stoney’s illegal removal order had a significant impact on the public and council vote because the removal was a “Fait accompli.”

“If there was futility involved, it was submitting public comment before the August 3, 2020 vote because the monuments had already been removed,” note the plaintiffs.

They maintain that “City Council should be required to vote again with the monuments restored so that the purpose of public comment before that vote can be faithfully preserved and the comments of interested citizens made meaningful.”

Suspect on the run in fatal shooting of 3 in Texas

Suspect on the run in fatal shooting of 3 in Texas

Virginians with appointments to receive this vaccine will be rescheduled for a different clinic.

A Lynchburg-area father and son, both pilots with Piedmont Airlines, had a full-circle experience when they served as co-pilots on their first commercial flight together in March.

William & Mary mistakenly tells 350 applicants they had been accepted

William & Mary accidentally sent an email to 350 applicants who had been denied or waitlisted congratulating them on their acceptance.

RICHMOND — Five women are suing the leader of the Virginia agency that handles unemployment benefits, alleging "gross failures" to provide needed help as required by law amid the coronavirus pandemic.

WATCH NOW: Police videos like the Windsor one that went viral usually stay secret in Virginia

The now-viral footage that captured a small-town Virginia police officer pepper spraying a Black man during a routine traffic stop in December gave the public a rare glimpse inside the state’s historically secretive criminal justice system. Virginia law gives police departments a lot of power to hide information from public view, and they often employ it. That means records like the ...

Aerial photo of a pedestal, where the J.E.B. Stuart statue was taken down, on Monument Avenue in Richmond on Tuesday, July 11, 2020.

The Richmond City Council voted on Aug. 3 to ratify Mayor Levar Stoney’s removal order but after more than a dozen statues had been removed.