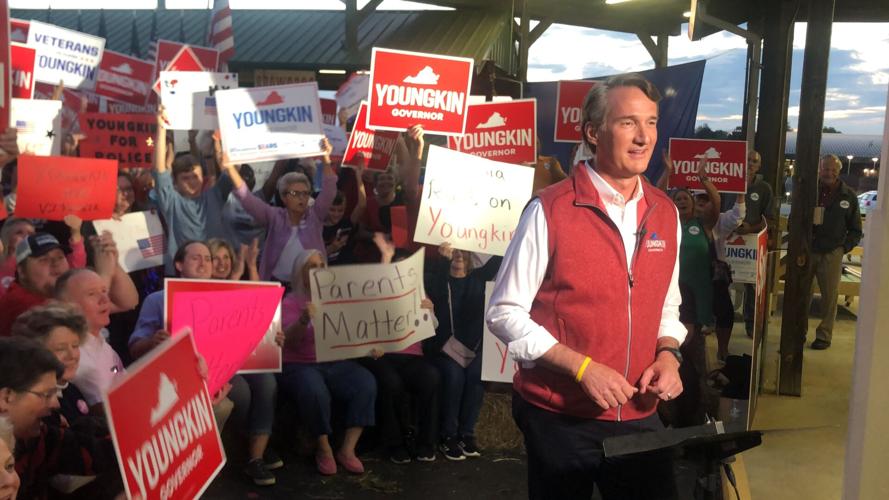 Gubernatorial candidate Glenn Youngkin: “There’s only two statewide elections this year, that’s it: New Jersey and here. There was an article about 2 weeks ago that says as goes Virginia, so goes New Jersey and so goes America.” 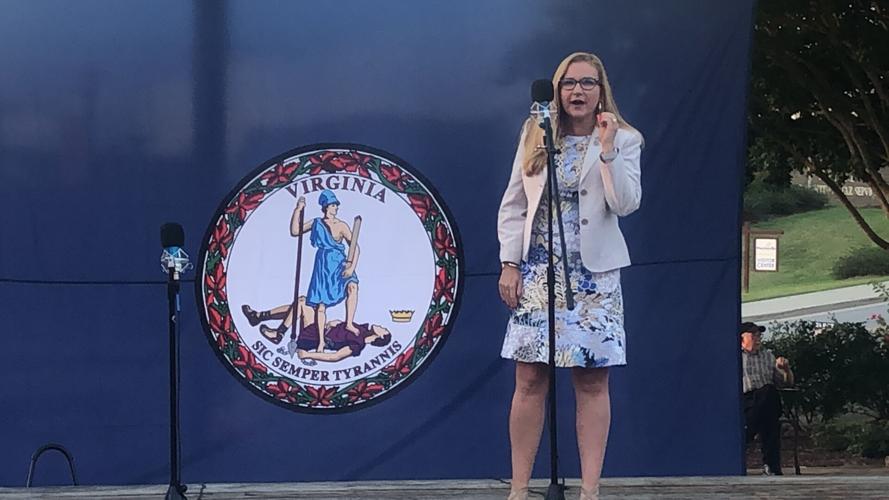 Va. Sen. Amanda Chase: “Glenn Youngkin is going to care about our kids, about our businesses, our livelihoods, our police. He’s pro-God. He’s pro-country. He’s pro-gun.” 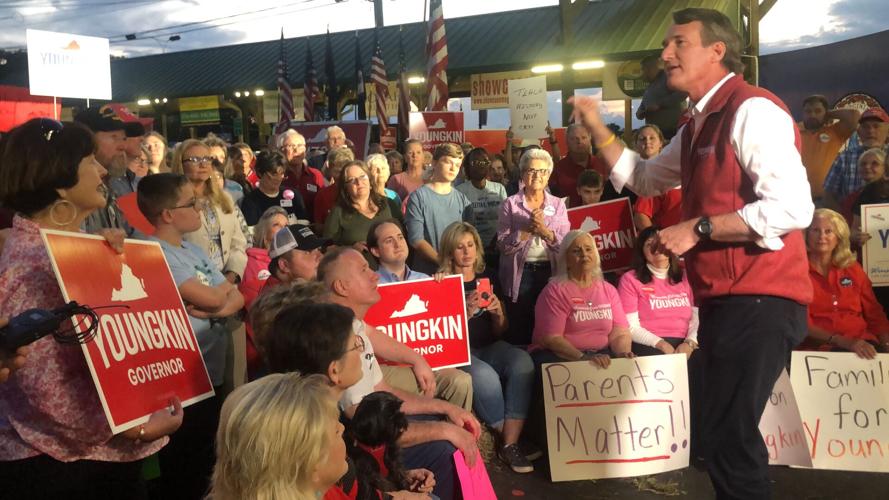 A crowd of hundreds cheers Republican candidate for governor Glenn Youngkin at a Henry County-Martinsville Republican Committee rally at the farmers market site in Martinsville. 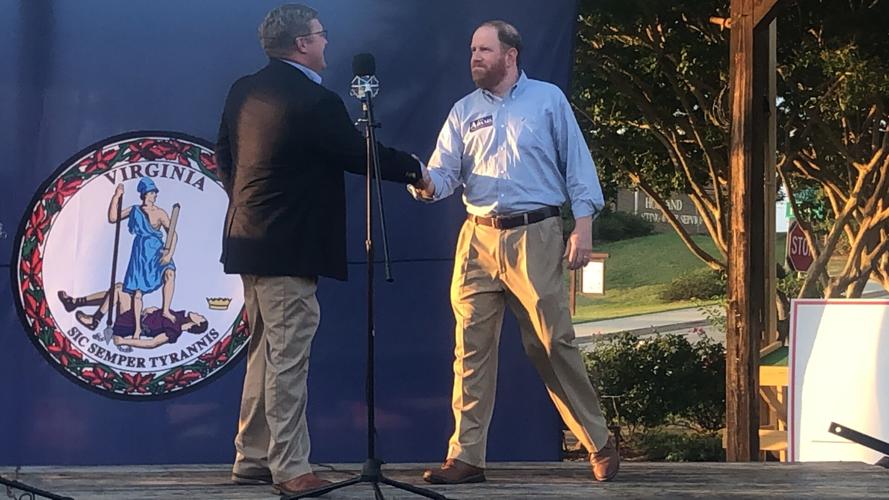 The nation will be watching Virginia’s gubernatorial elections, Republican candidate Glenn Youngkin said to a crowd of about 250 in Martinsville.

He was speaking Monday night at a Republican rally at the farmers market site, along with (State) Senators Amanda Chase and Bill Stanley, Delegates Danny Marshall and Les Adams, and other public officials and candidates.

“There’s only two statewide elections this year, that’s it: New Jersey and here,” said Youngkin, whose challenger is former Virginia governor (2014-18) Terry McAuliffe. “There was an article about 2 weeks ago that says as goes Virginia, so goes New Jersey and so goes America.”

Youngkin is a former co-CEO and president of The Carlyle Group, a global investment firm, where he worked from 1995 to 2020.

McAuliffe “wants to force everybody to join the union,” he said, and “defund and demoralize police. … He wants to raise your taxes yet again.”

He said McAuliffe said last week that the government and bureaucrats, not parents, have a key role in children’s education, and “Virginians are not going to have any part of it.

“This is no longer a campaign. It is a movement, and Virginia parents are on the move.”

Over the last 20 months, he said, “Loudon County was ground zero as parents stood up for their children: Open our schools. Stop teaching them what to think and teach them how to think, and by the way, if there’s sexually explicit materials in the library, in the curriculum, we deserve to know.”

As soon as Republicans take the majority in Virginia, he said, “We’re going to cut taxes for all Virginians. We’re going to save $1,400 for every family of four in year one.”

Those tax cuts would come through eliminating the grocery tax, suspending increase in gas tax for 1 year and doubling the standard deduction, he said.

He also talked about spending more on schools, and increasing assessments: Republicans would “reestablish excellence in our schools. This is critical,” he said. “Our schools are failing our children, and we all know it.”

When McAuliffe was governor, 88 schools failed to reach accreditation, he said, “and rather than do the hard work and fix the schools, all they did was change the standards so all 88 would pass.

“Today, Virginia ranks 50th in the nation … when it comes to standards for reading and math. … It’s just flat wrong, and as a result, our children are performing worse and worse and worse.”

Under his reign, he said, schools would remain open five days a week; teacher’s salaries would be increase; and facilities would be improved, “and then we’re going to hold them accountable for delivering results.”

Additionally, he said, “we’re going to launch the most impressive charter school program ever seen in order to give parents choice.” Virginia only has eight charter schools, he said, while North Carolina has 190, and Maryland has 140.

“On day one, we’re going to launch 20” charter schools, “and that is just a down payment,” he said.

A Republican-controlled Virginia would ban Critical Race Theory in schools, he said: In curriculum, “all of a sudden, our children are being told that everything must be viewed through a lens of race, and we know it’s not right.”

Eric Phillips, chair of the Henry County-Martinsville Republican Committee -- also introducing Matt Holt, head of the Patrick County committee –- said it was good to have a candidate visit Southside.

“We oftentimes get forgotten, and I think sometimes we have to remind them where the real Virginia is,” Phillips said. “The real Virginia was tobacco farms and furniture factories and textile mills, and that’s what made Virginia before it went north.”

Phillips is a candidate for Iriswood Supervisor.

“In Virginia, now, thanks to the Democrats, you can early vote,” Marshall said. “We are encouraging you to do that, the reason being is, you heard last year there were some votes that were stolen. You don’t want to go on November the second, and somebody says, ‘Well, somebody’s already voted.’ If you go vote now, they cannot steal your vote.”

Oct. 22 is the last day to register to vote, Marshall said, and “if you have like-minded friends and family,” encourage them to vote, he said. Early voting is weekdays, and Saturdays, Oct. 23 and 30, people can vote from 9 a.m. to 5 p.m.

Ninth District (Franklin County, Patrick County and the western parts of Henry County) House of Delegates candidate Wren Williams said, “How do y’all think Joe Biden’s doing?” The crowd booed. “You miss Trump yet?” They cheered, and some shouted, “Yes!”

“What we can do here in Virginia is, we can set the tone for the rest of the nation. That’s what we have the opportunity to do this year.”

“We need to restore a Republican majority,” he said.

Stanley said, “Now we have Northern Virginia … dictating what life should be for what I call ‘RoVa,’ the rest of Virginia. NoVa wants to come and make this NoVa, and that will not happen. We love God, we love our neighbor, we love the Bible, we love freedom. We love liberty, and we really love being left the hell alone.”

“Glenn and Winsome [Sears, candidate for lieutenant governor] and Jason [Miyares, candidate for attorney general] have given the commonwealth of Virginia our best opportunity to stop the madness. I’m in a senate that will remain 21-19 Democrat-controlled, northern Virginia-controlled, but we can take back the House of Delegates, and we can take back the governor’s mansion."

Stanley introduced “Trump in heels” State Senator Amanda Chase (11th District), who “sticks to her guns, and her values, and in matter of fact, she’s packing her gun right now, ladies and gentlemen.”

Chase, who ran against Youngkin in Virginia primaries, said “to protect election integrity in Virginia is to get Glenn Youngkin elected as our next governor.”

What she loves most about Youngkin “is his humility,” she said. “He is a God-fearing man, and that’s important to me, because I want the person who is in leadership … to fear God more than he fears man.”

Youngkin “is very sincere,” looking you in the eyes, no matter whom he is talking with, she said.

“I’m so thankful for you who came from the north and came from the South to be in Virginia, but I really like it that we have a homegrown Virginian running to be our next governor, because Glenn Youngkin is going to care about our kids, about our businesses, our livelihoods, our police. He’s pro-God. He’s pro-country. He’s pro-gun,” Chase said.

Gubernatorial candidate Glenn Youngkin: “There’s only two statewide elections this year, that’s it: New Jersey and here. There was an article about 2 weeks ago that says as goes Virginia, so goes New Jersey and so goes America.”

Va. Sen. Amanda Chase: “Glenn Youngkin is going to care about our kids, about our businesses, our livelihoods, our police. He’s pro-God. He’s pro-country. He’s pro-gun.”

A crowd of hundreds cheers Republican candidate for governor Glenn Youngkin at a Henry County-Martinsville Republican Committee rally at the farmers market site in Martinsville.