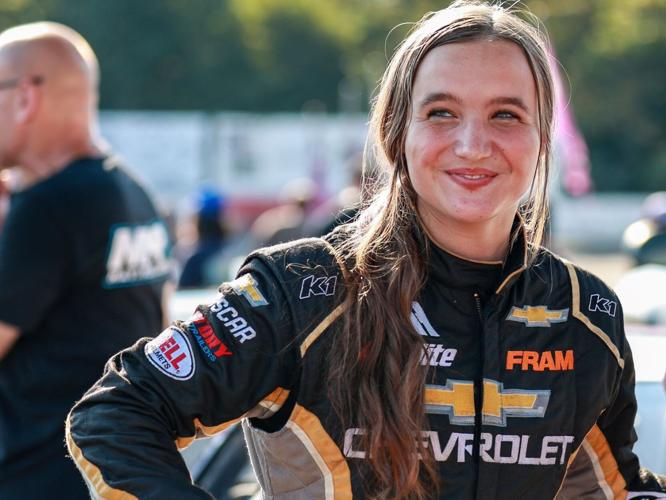 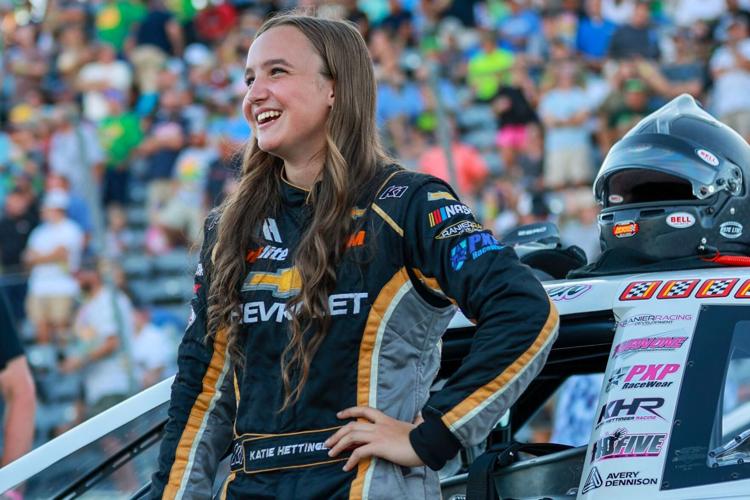 The youth movement has arrived at Martinsville Speedway, and one of its leaders this weekend is 15-year-old Katie Hettinger.

In her first full season driving a Late Model Stock Car, Hettinger has four wins and 10 top-5 finishes in 16 races this summer.

Already accomplished for a young age, the Dryden, Michigan driver isn’t young in racing years. She first got behind the wheel at five years old after watching her dad and grandfather race sprint cars, midgets, and “a little of everything,” she said.

“I went to my first race when I was less than a month old,” Hettinger said in a recent phone interview. “Since I was about a year old when I could understand what it was, I’ve wanted to do it.

There was one aspect of the sport that hooked Hettinger from the start.

“Probably the speed is the biggest thing,” she said. “I love driving fast.”

Hettinger has a championship in the 2020 Champion Racing Association Junior Late Model Series. She was the youngest female race winner at Hickory Motor Speedway, in Hickory, North Carolina, when she won there last September, and has four late model wins at the track this season, making her the winningest female driver in the track’s 72-year history.

After winning four races early in the season, Hettinger said she’s learned a lot about patience as the summer has gone on and seen some struggles on the track.

While Hettinger has competed in some big races this season – she finished second at Motor Mile Speedway, in Radford, in a CARS Tour race, and competed at North Wilkesboro Speedway last month – this weekend will be the biggest race of her career so far.

The key, she said, is in the preparation.

“I think really this upcoming week will be just a big experience thing,” Hettinger said. “Just being comfortable with how we’ve done this season. I think there’s still a lot of other variables since this is a big NASCAR track, so I think we just have to prepare really well and go in there not expecting too much or expecting too little.”

Hettinger has been doing Zoom calls with her car owner, watching videos of old Martinsville races, and putting in work on iRacing.

Even though iRacing doesn’t perfectly simulate the speed and what it will be like in the car, she’s hoping it’s enough to have her at least ready for practice on Friday afternoon.

“It’s kind of different because we don’t have the right set up in it and my pedals are different, so really we just did it to look at the markings on the track, get to know the track,” Hettinger said of iRacing. “But really the speed and everything I’ll have to learn on practice day.

“For Wilkesboro I found out so late that I would be running it that I didn’t have time to do sim training and we struggled pretty bad in the practice there, so we’re definitely probably overpreparing for this one because we want to perform good.

“We’re not going in here blind, but I still am pretty nervous about everything,” she added.

Hettinger said her excitement for this weekend outweighs her nerves.

More than anything, she’s just looking forward to a new experience on a NASCAR track she’s never raced before.

And maybe she can surprise some people along the way.

“I’m really excited but I am pretty nervous, too, because it’s such a big race,” she said. “But I’m really glad we’re going to be able to run it, especially against a lot of the big names that will be there.

“My goal is to at least make the race… and a top 10 would be even better.”

Hettinger will race two times in the ARCA Menards series later this fall, and will wrap up her season in November.

At just 15 she’s already in her tenth year of racing, but she has big dreams for many, many more to come.

“I really want to make it to Cup,” she said. “I want to win a (NASCAR) Cup (Series) championship. So I think just the determination and drive that I have to make it keeps me going because there are times when it’s pretty tough, but I want to make it so bad so I just keep pushing. And everybody is helping me so I thank them a lot.”

Cara Cooper is a sports writer

for the Martinsville Bulletin.

She can be reached at cara.cooper

It's About Time: Peyton Sellers gets first grandfather clock at Martinsville Speedway

Peyton Sellers has done just about all there is to do as a Late Model Stock Car driver. On Saturday, he finally got the win he had been racing for for so long, taking victory in the VSCU300 at Martinsville Speedway.

Every year, the ValleyStar Credit Union 300 is circled on Barry Nelson’s calendar, and Nelson Motorsports will be looking for a second win at Martinsville Speedway this Saturday.

As Martinsville Speedway celebrates 75 years, track president Clay Campbell spoke about the history of the track's late model race, and its growth over the decades.

Teenager Landon Pembelton looks back on his win at Martinsville Speedway last fall, and the doors that have opened up in his race career since then, as he returns to the track for this weekend's VSCU300.

Ty Majeski is one of the most accomplished super late model drivers in the country, and he’s also currently a title contender in the NASCAR Camping World Truck Series. This weekend he’ll race a Late Model for just the third time in his career.

Aaron Rodgers has his say on the NFL's greatest ever coach

Aaron Rodgers has his say on the NFL's greatest ever coach